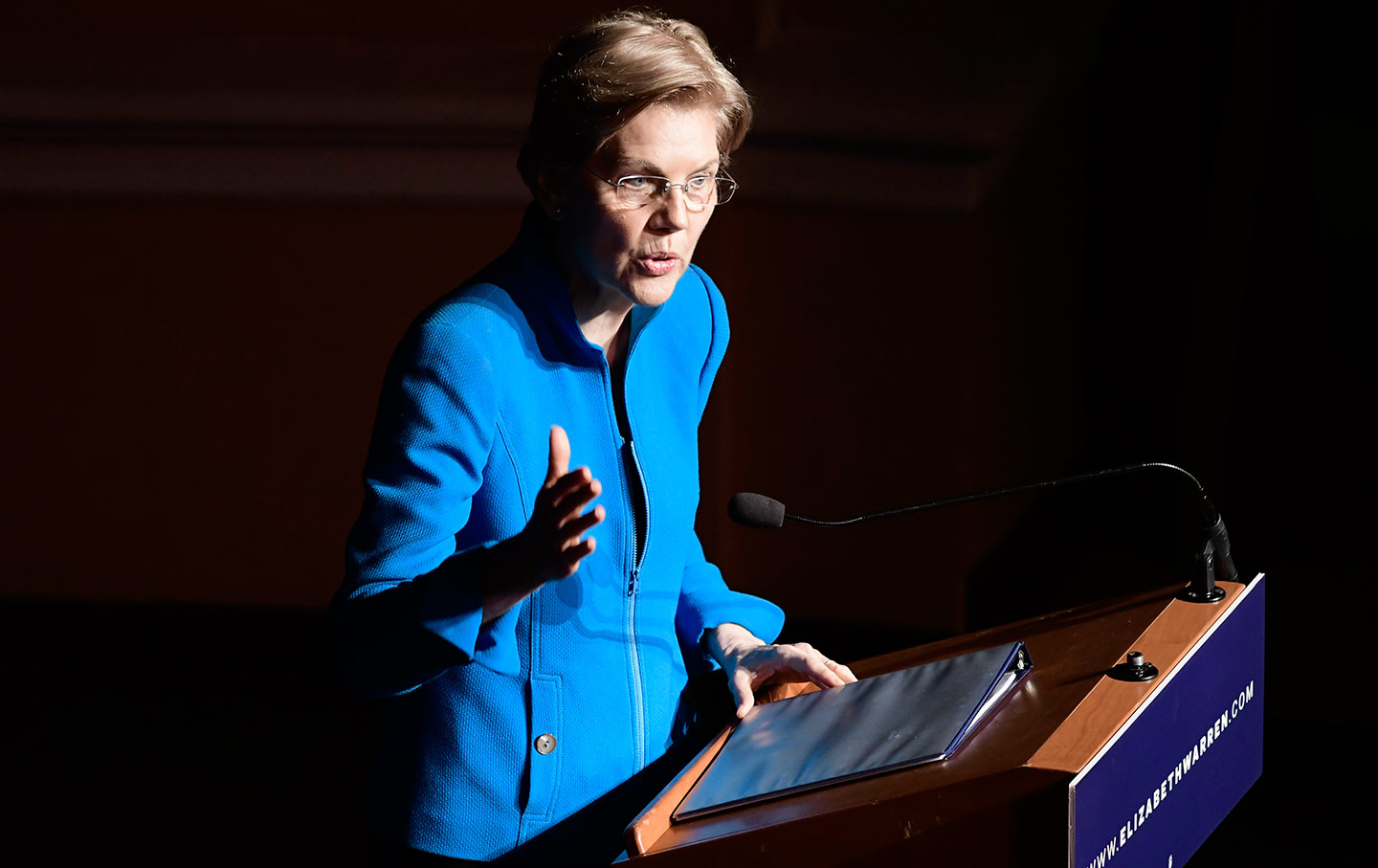 Elizabeth Warren, US senator from Massachusetts and one of the many Democrats running for president in 2020, speaks in San Juan, Puerto Rico, on January 22, 2019. (AP Photo / Carlos Giusti)

The New York Times recently reported that hedge-fund billionaire and GOP megadonor Kenneth Griffin shelled out a record $238 million for a penthouse apartment overlooking Central Park. The news came just days after Oxfam International reported that 26 billionaires have the same combined net worth as the poorest 3.8 billion people on the planet. Meanwhile, many of America’s richest corporate executives spent the week hobnobbing in Davos, Switzerland, at the World Economic Forum, where they focused on the preposterous idea of “upskilling” as a potential answer to rising economic inequality.

It seems that each new day brings fresh reminders that the economy is rigged in favor of an out-of-touch elite gobbling up more and more of America’s—and the world’s—wealth. Yet until recently, politicians have, with few exceptions, failed to respond with the kind of bold policies required to make a dent in the problem. Senator Elizabeth Warren’s idea for a new wealth tax is the latest reason to believe that this sorry state of affairs may finally be changing.

Warren’s proposal would levy a modest annual tax on the 75,000 wealthiest households in the country—roughly the top 0.1 percent. The plan was formulated with the help of UC Berkeley economists Emmanuel Saez and Gabriel Zucman, two of the world’s leading experts on income and wealth inequality, who estimate that it would raise $2.75 trillion over a decade. Warren is calling for a tax of 2 percent on the assets of those with a net worth above $50 million and a tax of 3 percent on billionaires. “By asking our top 75,000 households to pay their fair share,” she said, “my proposal will help address runaway wealth concentration and at the same time accelerate badly needed investments in rebuilding our middle class.”

Such a tax is a sensible response to the growing concentration of wealth among the superrich, which is fundamentally at odds with a functioning democracy. Today, the top 1 percent of US households own 40 percent of the country’s wealth—more than the bottom 90 percent combined. And regressive GOP policies, such as the party’s recent $1.5 trillion tax giveaway to corporations and the rich, are making the country even more unequal and less democratic. “Just as we have a climate crisis, we have an inequality crisis,” Saez and Zucman wrote recently, adding: “An extreme concentration of wealth means an extreme concentration of economic and political power.”

Warren’s idea is a potential game changer, and her status as a top 2020 presidential contender is forcing many in the media to pay attention to a problem they often ignore. Much like Representative Alexandria Ocasio-Cortez’s suggestion that top earners should pay a marginal tax rate as high as 70 percent, Warren’s plan has already won support from voices typically aligned with the Democratic establishment. “The incidence of extreme wealth inequality—as well as the magnitude of never-taxed wealth—is just so obscene, at this point in our nation, that I think there is simply no choice but to explore a wealth tax like this,” said Gene Sperling, a top economic adviser to Presidents Bill Clinton and Barack Obama.

Many on the right, as well as corporate centrists, have already lashed out at Warren’s proposal (both Fox News and former New York City mayor Michael Bloomberg, who is contemplating his own run for the 2020 Democratic nomination, have claimed it would usher in a Venezuela-style crisis). Others have argued that such a tax would be unconstitutional—a dubious claim that relies on a controversial 1895 Supreme Court ruling that, as the Institute on Taxation and Economic Policy explains, “has been limited to the point of irrelevance by subsequent court opinions.” The swift blowback from the right is not surprising, but polls have consistently shown that Americans favor increasing taxes on the wealthy. A January survey found that nearly 60 percent support much higher marginal tax rates, and a recent Pew Research Center survey showed that two-thirds of the public believe that the economic system is unfairly tilted in favor of powerful interests. The need for more equitable taxes was even raised, wonder of wonders, at the recent gathering of the world’s wealthiest in Davos, where Dutch historian Rutger Bregman chastised his elite audience by pointing out: “Almost no one raises the real issue of tax avoidance, right? And of the rich just not paying their fair share.”

As the Democratic Party’s ideas primary ramps up, plans to take on economic inequality should continue to get more attention, especially if Senator Bernie Sanders enters the race; he has just proposed expanding the number of wealthy Americans who would be subject to the inheritance tax. What is clear is that the public is hungry for far bolder measures than the ones our political leaders have offered in the past. May the best ideas win.