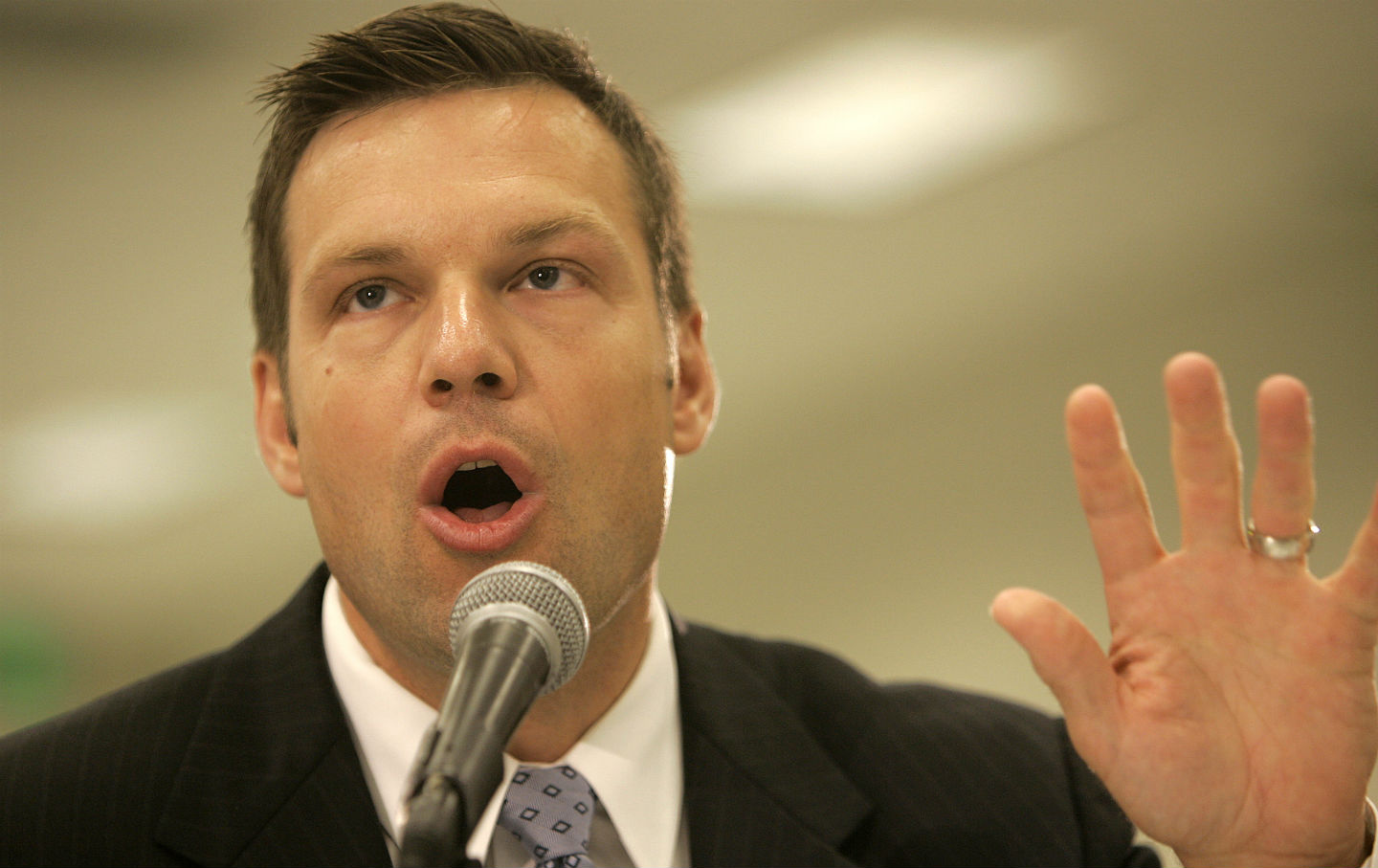 In fall 2010, Kansas Secretary of State Kris Kobach held a press conference alleging that dead people were voting in the state. He singled out Alfred K. Brewer as a possible zombie voter. There was only one problem: Brewer was very much alive. The Wichita Eagle found the 78-year-old working in his front yard. “I don’t think this is heaven, not when I’m raking leaves,” Brewer said.

Since his election in 2010, Kobach has been the leading crusader behind the myth of voter fraud, making headline-grabbing claims about the prevalence of such fraud with little evidence to back it up. Now he’s about to become a lot more powerful.

On Monday, Kansas Governor Sam Brownback signed a bill giving Kobach’s office the power to prosecute voter-fraud cases if county prosecutors decline to do so and upgrading such charges from misdemeanors to felonies. Voters could be charged with a felony for mistakenly showing up at the wrong polling place. No other secretary of state in the country has such sweeping prosecutorial power, says Dale Ho, director of the ACLU’s Voting Rights Project.

“It means a person and an office with no experience or background in criminal prosecutions is now going to be making a determination of whether there’s probable cause to bring a criminal case against an individual who may have just made a paperwork mistake,” Ho says. “There is a reason why career prosecutors typically handle these cases. They know what they’re doing.”

Kobach claims there are 100 cases of “double voting” from the 2014 election that he wants to prosecute, but there’s been scant evidence of such fraud in Kansas in past elections. From 1997 to 2010, according to The Wichita Eagle, there were only 11 confirmed cases of voter fraud in the state.

Such fraud has been just as rare nationally, even according to Kobach’s own data, noted The Washington Post:

Kansas’ secretary of state examined 84 million votes cast in 22 states to look for duplicate registrants. In the end 14 cases were referred for prosecution, representing 0.00000017 percent of the votes cast.

Kobach says he needs this extraordinary prosecutorial power because county and federal attorneys are not bringing enough voter-fraud cases. But Kansas US Attorney Barry Grissom said last year that Kobach’s office had not referred any cases of voter fraud to his office. “We have received no voter fraud cases from your office in over four and a half years,” Grissom wrote to Kobach.

Kobach has been a leading proponent of his state’s strict voter-ID law, which decreased turnout by 2 percent in 2012, according to the Government Accountability Office, with the state falling from 28th to 36th in voter turnout following its implementation.

He’s also been the driving force behind Kansas’s 2011 proof-of-citizenship law for voter registration, which requires voters to show a birth certificate or passport to participate in the political process. Twenty-five thousand voters had their registrations “suspended” in the 2014 election because of the law; even the right-wing group True the Vote claimed that only 1 percent of the list were verified non-citizens.

Those wrongly on the list included Da Anna Allen, an Air Force vet. She told The Wichita Eagle:

“It just caught me off guard that I was not registered. I served for a week on a jury trial, which basically told me I was a registered voter. I’m a disabled veteran, so it’s particularly frustrating. Why should I have to prove my citizenship when I served in the military?”

After the Supreme Court found that Arizona’s proof-of-citizenship law violated the National Voter Registration Act, Kansas and Arizona instituted a two-tiered voting system, arguing that those who registered through the federal NVRA form could not vote in state or local elections. That system has it roots in the Jim Crow South.

Kobach, who wrote Arizona’s “papers, please” anti-illegal immigration law, alleges “in Kansas, the illegal registration of alien voters has become pervasive.” That defies common sense, as Johnson County District Attorney Steve Howe pointed out. “Why would an illegal alien want to go to vote and draw attention to himself?” Howe asked.