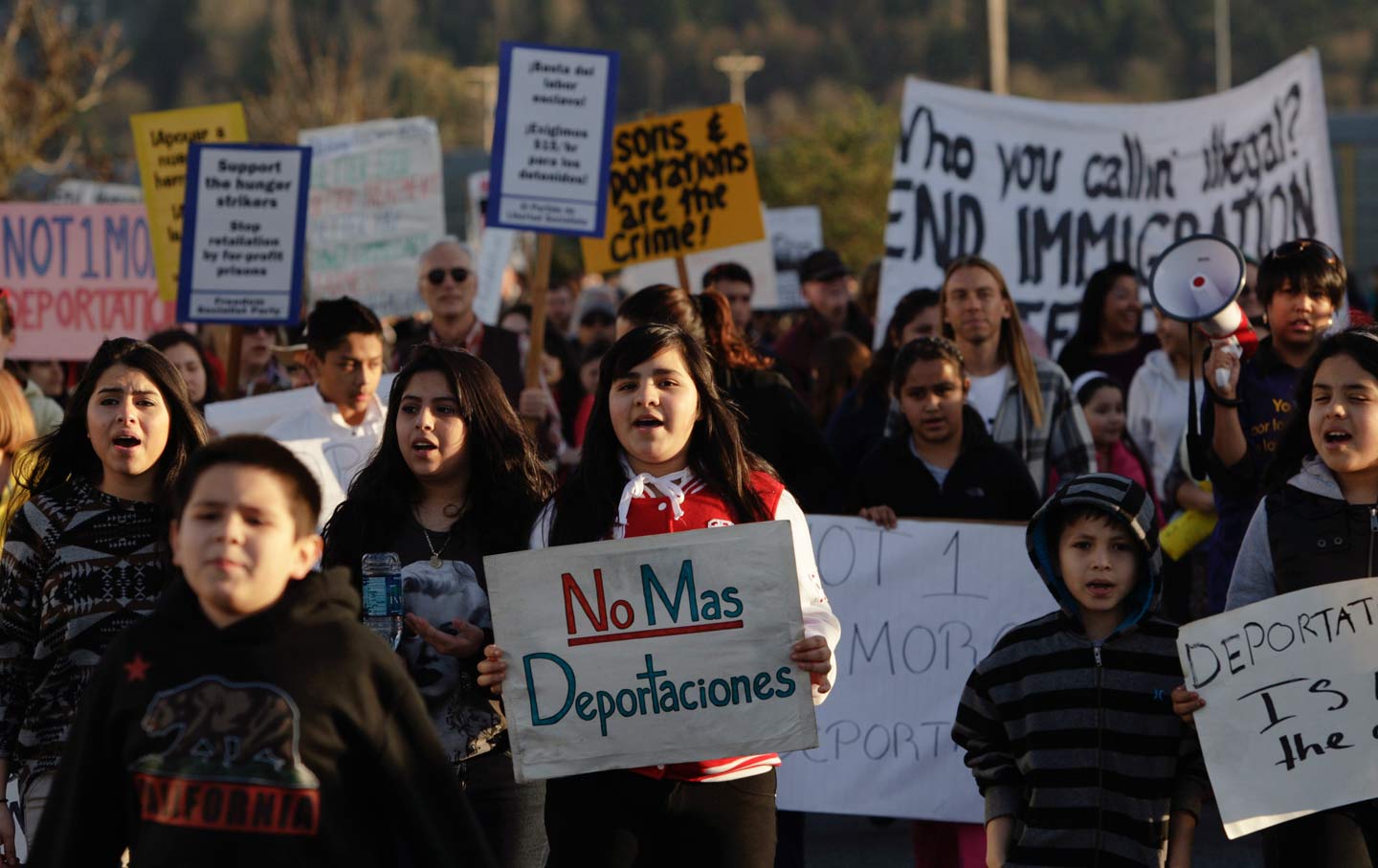 Immigrant-rights supporters rally outside the Northwest Detention Center of US Immigration and Customs Enforcement in Tacoma, Washington. (Reuters / Jason Redmond)

Immigration briefly seized the podium at the Florida Democratic debate, with both Bernie Sanders and Hillary Clinton trying to calibrate their message toward Latino voters by vowing to pursue a more humane immigration policy and critiquing President Obama’s record of mass deportations. Still, there was precious little discussion of undocumented immigrants as anything but a problem to be dealt with.

The candidates could have looked at new economic data showing that in Florida, undocumented immigrants contributed $588 million annually in state and local taxes. That revenue, which is paid by people who are powering the local economy as all other Floridians are, through their labor and consumption, is drawn from sales and excise taxes ($454 million) and property taxes ($134 million).

Altogether, according to the state and local tax data analysis—published by the Institute on Taxation and Economic Policy (ITEP)—undocumented immigrants contribute about $11.6 billion to the economy annually, including nearly $7 billion in sales and excise taxes and $3.6 billion in property taxes. They are, in economic terms, productive citizens, and pay a higher effective tax rate than the top 1 percent income bracket. That alone is not the primary reason they should be embraced as neighbors and coworkers. But it dissolves the myth that immigrants do nothing but drain public coffers.

An even larger boost would come from a full implementation of the executive actions that Obama rolled out for undocumented youths and parents earlier in his term: deportation relief granted to youths who arrived as children without authorization and a similar initiative for parents who are undocumented but have children born in the United States.

Under these policies—which have been obstructed by court challenges—up to 5.2 million undocumented immigrants could be granted relief, and cumulatively contribute “an estimated $805 million a year” in state and local taxes.

Election-season politics aside, ITEP calculates that state coffers have a lot to gain from essentially handing the undocumented green cards: about $2.1 billion annually on top of the current $11.6 billion, based on the most recent data, about half of that from personal income tax withheld, and a third from sales and excise taxes. In other words, if only our immigration system were rationalized to treat these people as what they actually are: permanent residents.

According to ITEP executive director and report author Matt Gardner, most of the additional wage gains would come from “just more people being incorporated into the system and having income tax withheld from their paychecks who aren’t having that income tax withheld right now.” But legalization would also bring a more positive long-term personal ripple effect: They will earn more, with a wage boost of some 10 percent under full legalization.

Though they would pay more taxes, it’s estimated that many of the undocumented would willingly get “on the books” if it meant shielding their families from deportation; there’s an immeasurable benefit to keeping families intact instead of tearing them apart through deportation and detention. And they might actually qualify for the benefits they help fund, like earned-income tax credits that help lift low-wage workers out of poverty, and Medicare and Social Security in later years. (Many undocumented workers already pay federal tax through automatic payroll deductions.)

Green cards wouldn’t remedy the inequities endemic to the neoliberal economy, but for the workers cast across borders by globalization, some of the poorest would gain basic recognition of their economic citizenship.

Critics might point out that there’s no total figure for the undocumented population’s fiscal “cost”—how much undocumented immigrants consume in services. With Malthusian vitriol, the Trump camp might argue that migrants are scrounging from “our” public health and social services and filling up schools with their (native-born citizen) kids. Gardner cautions against such a simplistic calculus as an arbitrary and politically squishy exercise: Would an emergency room visit count as an undocumented person’s liability—or is this offset by better health that allows them to stay employed and productive? Do their kids merely take up classroom slots, or could they grow up to obtain careers that enhance society and improve their communities?

Similarly, we know immigration enforcement is a huge drain on the federal budget, but that’s not the problem of the undocumented so much as it is an issue of irrational priorities, according to reform advocates. Consider the billions spent on enforcement, including checkpoints and electronic surveillance, Border Patrol personnel and weaponry, and private prison contractors commissioned to run dungeonlike detention centers.

Now imagine if that funding were redeployed in legal services or rehabilitation for refugee families.

Another potential ramification of regularizing the status of over 11 million people is that it would help dismantle a two-tier labor structure that enables exploitation of and discrimination against immigrants. Along with facilitating abuse of unauthorized workers, the systematic alienation of the “foreign-born” workforce abets the trafficking of temporary “guest workers” imported by low-wage employers.

If labor standards were more equalized across communities, enforcing the rights of immigrant laborers would help fix the epidemic wage theft that currently acts as a de facto “tax” on low-wage immigrants’ earnings.

In economic terms, the data offers a critical counterpoint to the bigoted assumption that immigrants inherently pose a burden.

ITEP’s fiscal projections don’t capture the full social landscape of what a more integrated, democratic economy would be—that’s immeasurable. They do show that recognizing people’s rights can often be a good deal for all workers. Yet it also shows the contributions that are happening now, which politicians steadfastly overlook: a social force so entwined with everyday culture in this country that it’s barely noticed…until we realize that in politics, and in life, we can’t imagine America without them.