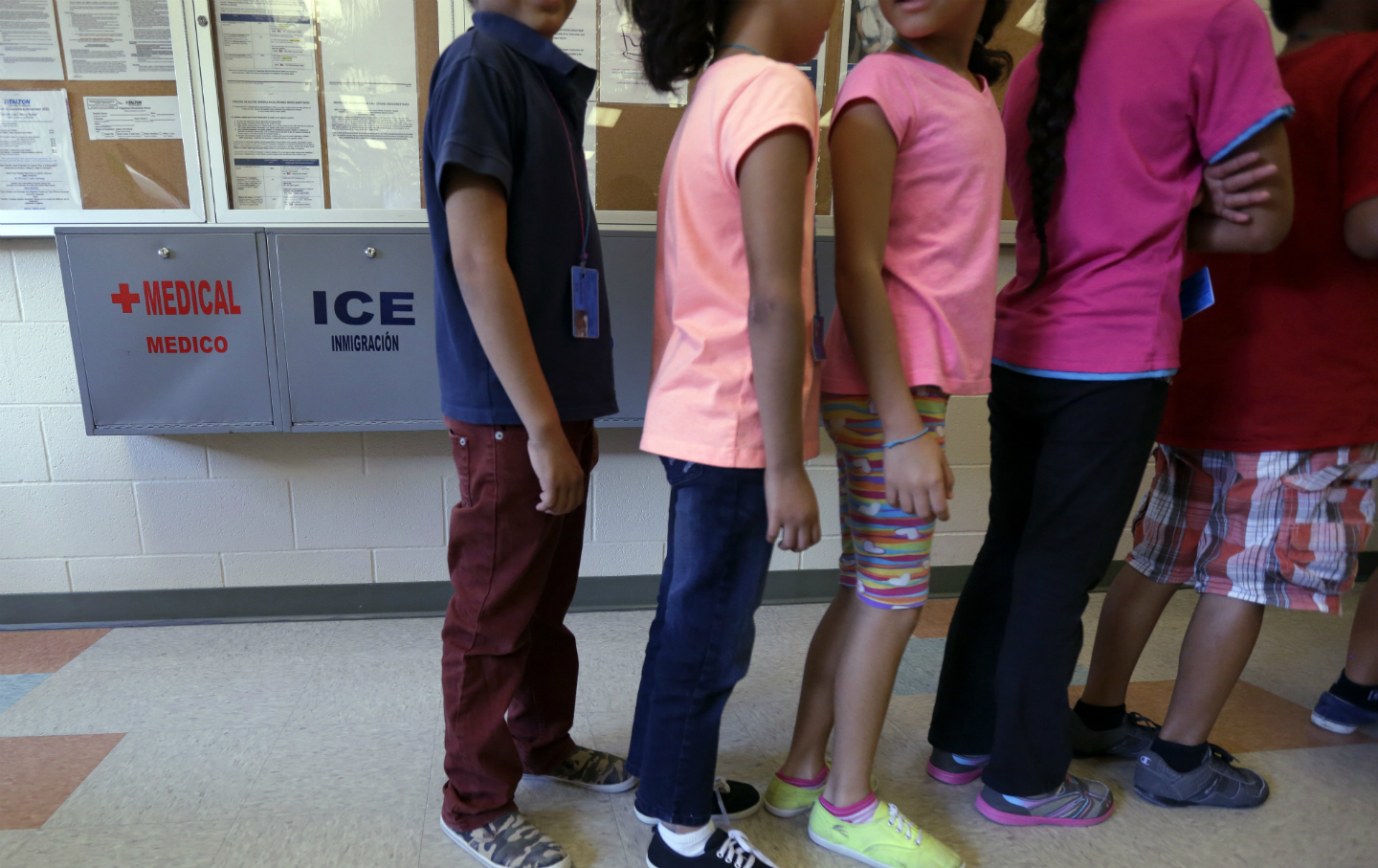 Detained immigrant children line up in a temporary home for immigrant women and children detained at the border in Karnes City, Texas in 2014. (AP Photo / Eric Gay)

Why is the United States separating asylum-seeking children from their parents? Kirstjen Nielsen, the secretary of homeland security, has avoided answering this question, which makes a recent lawsuit by the ACLU so important and so necessary. The suit is based on the case of a Congolese woman and her 7-year-old daughter—identified in court papers as “Ms. L.” and “S.S.”—who fled the violence in their home country, traveled to Mexico, and then crossed into California last November, turning themselves in to border agents. Ms. L. was processed and detained in an Immigration and Customs Enforcement facility in San Diego, while her child was torn away from her and taken to a different facility in Chicago—2,000 miles away. They were not brought before a judge or given a chance to be heard.

The case has rightly drawn public outrage, as well as a renewed focus on the Trump administration’s immigration policies. In a sense, Donald Trump is the great revelator: His vulgarity brings attention to practices that would otherwise have been hidden beneath a veneer of respectability. But, as it happens, the case of Ms. L. is not the first time that ICE has separated a child from his or her parents. This occasionally happened under the Obama administration, too, though immigrant-rights activists say there has been a noticeable and significant increase in the practice under Trump. The rationale that the Department of Homeland Security has offered for this horrendous practice is that there is a high risk of human trafficking at the border, and thus US officials need to ensure that a minor is indeed accompanied by his or her parent.

But if a concern for the safety of the child is foremost, then a simple DNA test could have established Ms. L.’s maternity, and the pair could have been kept in the same facility as they awaited the result of their hearing. Instead, S.S. was held in Chicago for more than four months. She spent her first Christmas in this country in detention, separated from her mother, in a strange, snowy city. It was only after the ACLU lawsuit drew nationwide attention that a DNA test was completed; it proved that Ms. L. was indeed S.S.’s mother. It’s important to note here that mother and daughter turned themselves over willingly to Customs and Border Protection agents when they arrived in the United States, because they wanted to prove to the authorities that they have a compelling claim to be granted asylum and should be able to remain in this country legally. In short, they did exactly what asylum seekers are supposed to do, and have been met with shocking cruelty.

Anti-immigration activists (or “restrictionists,” as they euphemistically call themselves these days) often argue that the arrival of undocumented immigrants is unfair to people who come here the legal way. But asylum seekers rarely have the leisure to file an application and wait months, or even years, for it to be processed. Civil wars, political assassinations, and religious persecutions are often unpredictable events, so it’s unreasonable to expect people to risk their lives and expose themselves to retaliation as they wait for the paperwork to be completed. The reality is that refugees flee their homeland first and look for asylum later, which is what Ms. L. and her daughter did.

When asylum seekers turn themselves in to US border guards, they are immediately arrested and processed through the court system. In her searing book Tell Me How It Ends: An Essay in Forty Questions, Valeria Luiselli explores what happens to refugees as their cases are heard in federal immigration courts. Luiselli, a Mexican novelist and essayist, volunteered in New York as a translator and helped undocumented Central American children fill out a questionnaire required by the government for adjudicating their appeals. The first question on the questionnaire is “Why did you come to the United States?” Others ask for details about their journey, the dangers they faced in their home country, and the names and legal status of their family members here. 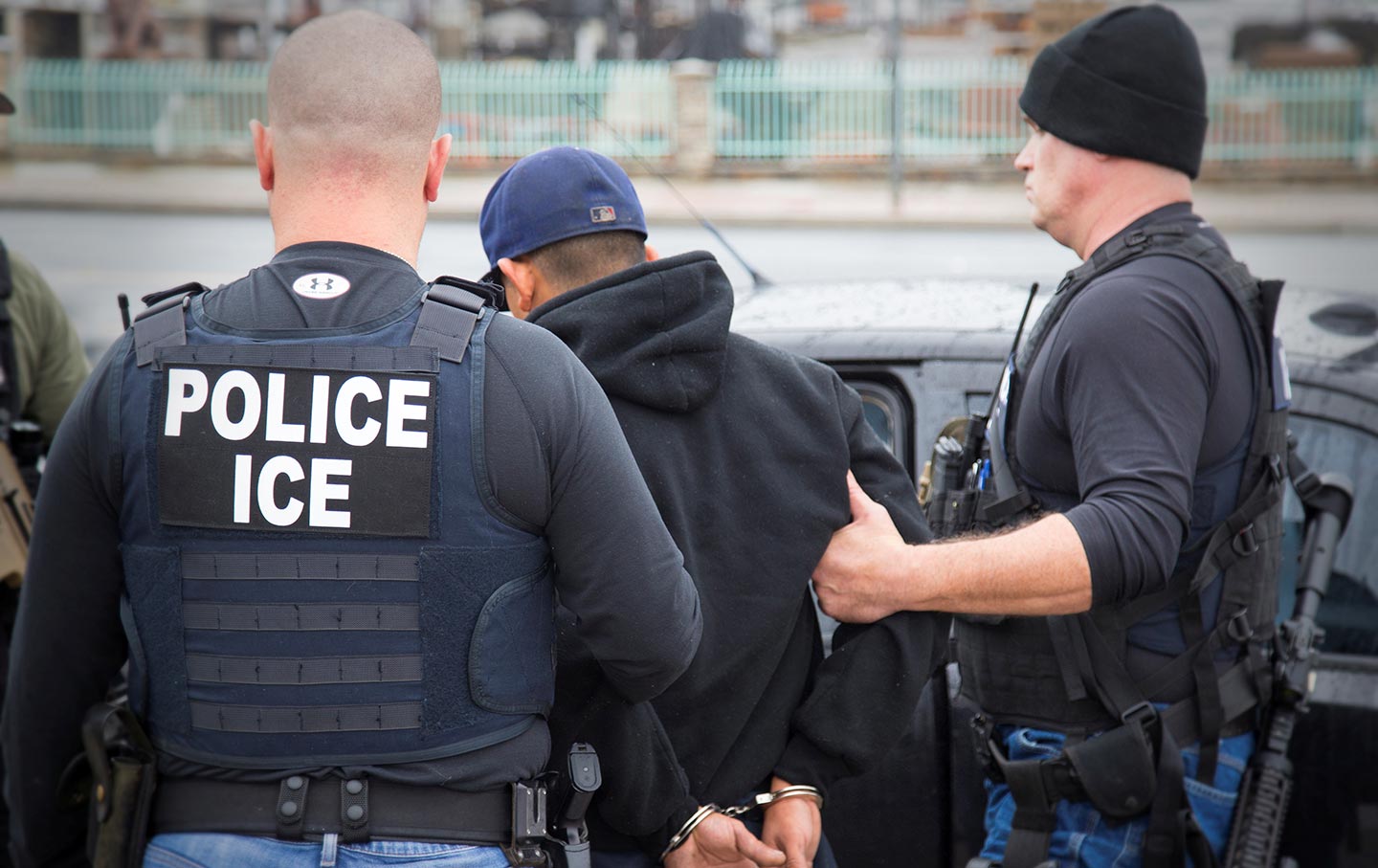 The children answer, and Luiselli translates and fills out the form, but very often the children give her only terse replies or play with crayons. They have fled gang violence and journeyed thousands of miles, often under extremely perilous conditions, to seek safety. Or they’ve lost parents or caretakers and are trying to reunite with a living relative in the United States. Even when their answers clearly show that the children are afraid for their lives, this is not enough to build a strong case. Some kind of documentation is often necessary to secure a pro bono lawyer—which, given the nature of the journey they’ve just endured, is arduous if not impossible.

Luiselli’s book, and the case of Ms. L. and S.S., highlight the mistake in handling asylum applications as a law-enforcement problem. Nielsen’s DHS is treating refugees as a priori criminals, denying them the protections of due process. Far from deterring future refugees, the practice of separating asylum-seeking families is instead inflicting unbearable trauma on children who have already suffered so much.

Over the past few years, the enforcement of immigration policy in this country has slowly shifted from the corrective to the punitive, and now to the abusive. We see this with the construction of walls around border cities, which has resulted in a shift of migratory trails to deserts and mountains and a rise in migrant deaths. We see this in the raids and arrests that ICE has conducted outside schools, places of worship, and soccer fields. We see this in the effort by Attorney General Jeff Sessions—previously a staunch advocate of states’ rights—to stop places like California from declaring themselves sanctuary states. And we are now seeing this in the practice of breaking up asylum-seeking families. None of it has worked. But it has created a vast, cruel bureaucracy that has, step by step, diminished our collective humanity.