People attend the launch of the “No” campaign of the pro–Kurdish People’s Democratic Party (HDP), in Istanbul on March 2, 2017. (Oscar Durand / Redux)

Istanbul—Cups of tea and trays of sugar cubes are passed around in a crowded meeting in Istanbul’s Sisli district on a damp and cold winter night. Dozens of activists are gathered around a conference table littered with buttons and stickers, some with a simple “Hayir,” or “No,” on them, others with the slogan “No to a One-Man Regime.” The fliers are rainbow-colored, a homage to the 1988 campaign to remove Chilean dictator Augusto Pinochet from power in that year’s plebiscite.1

The activists are inspired by that campaign—indeed, the government must be sensitive to the echoes, since a documentary about the Chilean plebiscite was pulled off the air in Turkey this year—as they plan for what will be their first citywide forum to mobilize against an April 16 constitutional referendum called by President Recep Tayyip Erdogan.2

If the referendum passes, Turkey would adopt a presidential system akin to the one in the United States, but without the checks and balances that limit presidential power. There would no longer be a prime minister, and the cabinet would be appointed directly by the president, without approval from Parliament. The president could unilaterally dissolve Parliament, effectively binding that body to his own political agenda. Erdogan could issue presidential decrees even in the absence of a state of emergency. The judiciary would be tasked with ensuring that those decrees do not infringe on fundamental rights, but under the new system, the president would appoint, without the need for parliamentary approval, the majority of judges appointed to the Constitutional Court, and he would have a strong say in other top judicial bodies. Erdogan could run for two more terms after his current one ends in 2019, potentially ruling until 2029, with many of the de facto powers he has assumed being enshrined in the constitution.3

Democratic activists are now facing a populist leader who has branded them as traitors and terrorists.

Every few days, small groups of activists gather across Istanbul—at squares, bus stations, and metro stops crowded with commuters—hoping to reach voters who are uneasy about the amendments but perhaps unaware they are not alone. For Eyhan Ehsan, a barrel-chested, self-described nationalist dressed in a dark suit with the Turkish flag pinned to his collar, the biggest worry is security. “We are already in danger because of what we are doing,” he says. “We need to make sure we have security at this thing. We need people patting down anyone coming in. Anything can happen.”4

The activists represent a spectrum of the grassroots opposition to Erdogan—from longtime leftists to secular Kemalists, Kurds, and a handful who describe themselves as Islamists—all now facing a populist leader who has branded them as traitors and terrorists.5

“People are afraid to come together, to do politics, and it’s harder for us to reach people now.”

The last such public mobilization against Erdogan was in 2013, when a development project threatening a green space in Taksim Square—considered by many to be the secular center of Istanbul—sparked weeks of protests, eliciting a deadly police response in which four were killed. But those days seem tame compared to today, says Ibrahim, an activist with the “No” campaign, who has watched as the threat of terror attacks and mass arrests have pushed fellow activists away from the public sphere. “People are afraid to come together, to do politics, and it’s harder for us to reach people now. But still, this referendum politicized people,” says Ibrahim, who declined to give his last name. “After this, there will be a very small window left for opposition to Erdogan.”6

Their campaign is fraught with risks. A report by the opposition Republican People’s Party (CHP) documents 231 incidents of threats or violence against activists like Ibrahim, including everything from local officials refusing to grant permits for rallies to knife-wielding Erdogan supporters rushing speakers. At least 330 activists have been detained while campaigning against the referendum. They have been charged with insulting the Turkish state or President Erdogan, or violating a blanket ban on political activities that were put in place after the unsuccessful military coup last July.7

Erdogan was already on a path to eliminating his critics, but the coup attempt gave him the political capital and legal cover to undertake what CHP head Kemal Kılıçdaroğlu has dubbed a “civilian coup.” Turkey has been under a state of emergency since then, and only the largest political parties have been able to organize public rallies for a “No” vote. Erdogan’s government issues official decrees on a regular basis announcing the closure of everything from civil-society groups to media outlets accused of links to terrorism, a designation that has been used to describe not only the millions of followers of Fethullah Gulen, the cleric allegedly behind the coup attempt, but also leftists and Kurdish leaders deemed too close to the Kurdistan Workers’ Party (PKK), and even dissident supporters of Erdogan’s Justice and Development party (AKP). More than 1,583 civil-society organizations have been shuttered, 40,000 people arrested on terrorism charges, and 125,000 public-sector workers purged, including top judges and civil servants who oversee elections.8

At least 158 media outlets—leading news channels, magazines, and newspapers—have already been closed down.

At least 158 media outlets—leading news channels, magazines, and newspapers—have been closed down because of sympathetic coverage of Gulen or the PKK. Earlier this year, a presidential decree lifted regulations requiring impartial coverage of elections; news broadcasts are now nearly round-the-clock, overwhelmingly positive accounts of Erdogan and his surrogates. One survey conducted over the first three weeks of March found that the top five news channels gave 169 hours of live coverage to Erdogan, 301 hours to his AKP surrogates, and just 46 hours to the CHP. 9

Despite the obvious drawbacks of the presidential system called for in the referendum, polls show that the amendments could pass with a slight majority. Erdogan, who has not lost an election since he became prime minister in 2002, is banking on his personal charisma, and for his followers, his track record seems to overshadow any pitfalls of the new system.10

Giant portraits of Erdogan have been hung all over Istanbul, usually beside slogans like “One People, One Flag, One Nation, One State.” The president is riding a wave of popularity that surged after the coup attempt, when even many opponents praised his courageous stand against the military. This has made him nearly as revered as Mustafa Kemal Atatürk. Nearly a century apart, both men lead a country facing an existential crisis, but while Atatürk suppressed Turkey’s Islamic heritage, Erdogan has embraced it; he has made being a pious Muslim not only acceptable, but desirable. Billions of dollars have been spent on mosques, seminaries, and other services for the pious, and basic rights like the freedom to wear a headscarf in the public sector have finally been secured by the president’s AKP.11

Erdogan’s popularity is no doubt also partly the result of his successful stewardship of the economy. Under the AKP, Turkey’s GDP per capita more than tripled, and Ankara finally paid off its last debts to the IMF, ending six decades of dependence. Turkey now has the world’s 17th-largest economy. When critics say Erdogan’s authoritarian ways will undo all the progress, he points to cities like Istanbul, where he has built massive bridges, tunnels, and public-transport projects. “Is this not the modern Turkey?” he rhetorically asked supporters this month. 12 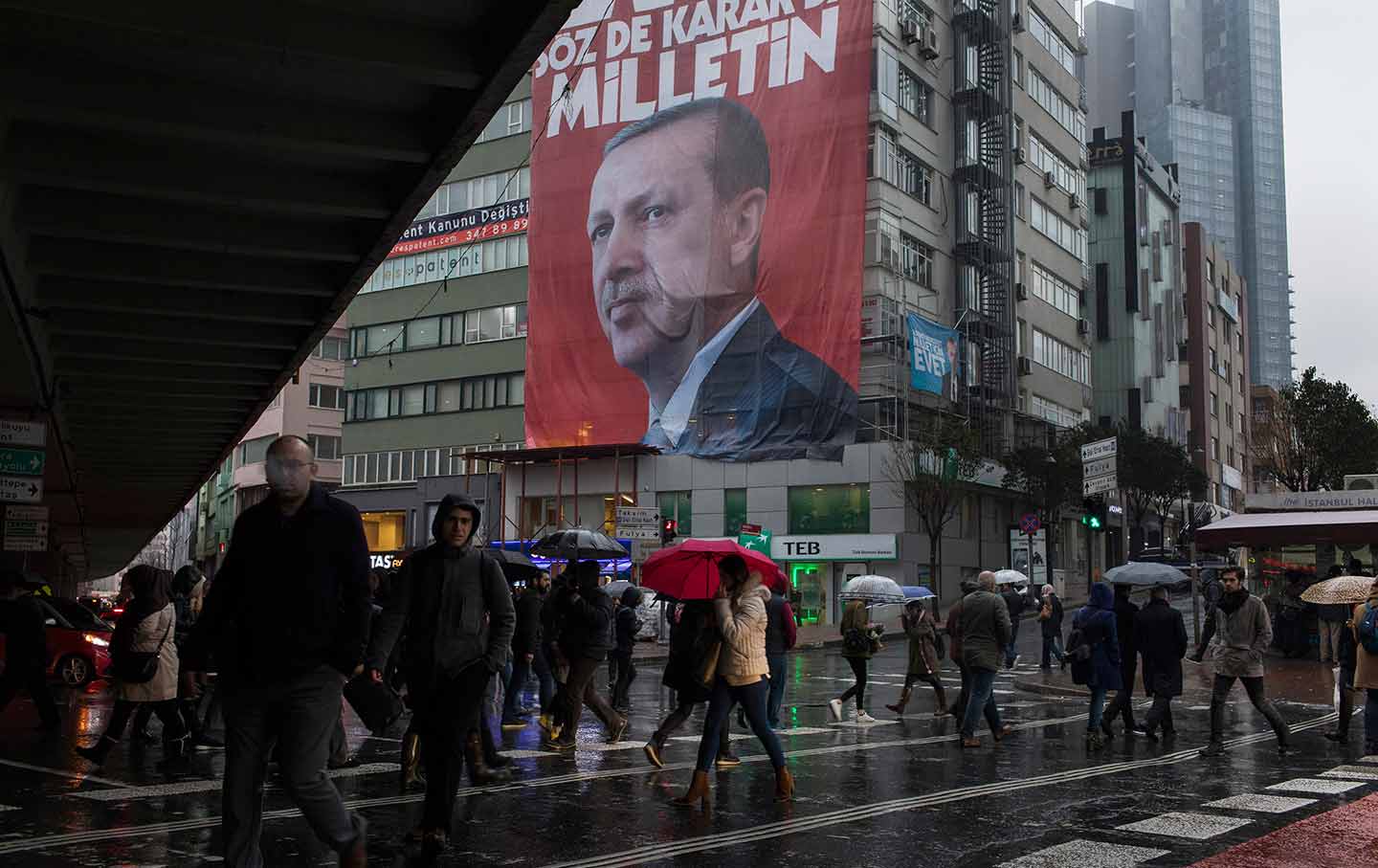 A pro-government banner supporting the “Yes” vote in central Istanbul, Turkey on March 14, 2017. In the banner is Recep Tayyip Erdogan, Turkey’s president. The slogan says “In their words, in their decision, the people say yes.” (Oscar Durand / Redux)

The new constitution, Erdogan likes to repeat, is meant to ensure that the “people’s will” is reflected in Parliament. The current parliamentary system is unreliable, he claims, because it can force a popular party to form a coalition government, as was the case after the June 2015 elections, when the AKP failed to garner support from opposition parties, triggering new elections later that year. 13

The AKP says that “as long as people go to the ballot box and vote for you, then you have legitimacy, but the problem is this is not sufficient now,” says Fuat Keyman, director of the Istanbul Policy Center, a think tank focusing on policy analysis, and part of a group of 282 civil-society organizations that have been holding forums to develop a new constitution since 2012. “What makes a constitution extremely crucial is that it is a social contract, an agreement on the norms of living together, and that cannot be reduced to the ballot box.”14

While critics like Ibrahim pass out fliers on sidewalks, Erdogan’s supporters fill stadiums to watch choreographed pep rallies. At a March 5 rally commemorating Women’s Day organized by KADEM, a women’s-rights organization led by Erdogan’s daughter, tens of thousands cheered as speakers were ushered onstage with their own theme music. It was the launch of a campaign supporting the amendments under the slogan “Where there are women, there is democracy,” a nod to the long legal battle that allowed parliamentarians to wear the head scarf. 15

Erdogan does not fail to remind the public that it was he who thwarted the July 15 coup attempt, thus becoming the first leader to successfully stand up to a secular-minded military that has orchestrated several coups in recent decades (in 1960, 1971, 1980, and 1997). “Those who say ‘No’ will be siding with July 15,” Erdogan has said, calling his critics “terrorists” and “traitors” thwarting the “people’s will.” Those opposing him, Erdogan told a rally in Bursa this month, should be careful that they “do not risk this world and the afterlife.”16

But Erdogan’s attempt to exploit Turkey’s historic secular-conservative divide may just backfire. Even Islamists think he has gone too far this time. Leaders from the ultraconservative Saadet Party, the precursor to the AKP, are now organizing opposition rallies alongside the secular CHP, a political alignment that would have been unfathomable just a few years ago. Former President Abdullah Gul and former Prime Minister Ahmet Davutoglu—Erdogan’s earliest allies—have pointedly refused to appear at rallies supporting the AKP. A group of 550 former parliamentarians, including 108 former cabinet members, have launched their own campaign against Erdogan’s referendum. The group’s leader, former AKP Deputy Prime Minister Abdullatif Sener, calls the referendum Turkey’s “great embarrassment of the century.”17

Whether he wins or loses on April 16, Erdogan’s campaign for a new constitution has already upset the political, religious, and social cleavages that brought him to power.18