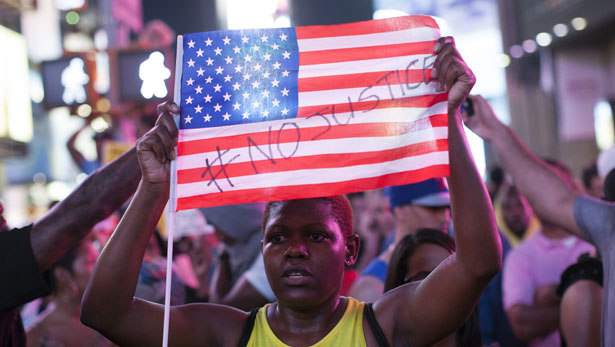 Protesters rally in Times Square in response to the acquittal of George Zimmerman in the Trayvon Martin trial, July 2013. (Reuters/Keith Bedford)

Progress is an essential tenet of America’s civic religion. As someone born and raised in England, where “not bad” is a compliment and “could be worse” is positively upbeat, this strikes me as an endearing national characteristic. But as with any religion, when faith is pitted against experience, faith generally wins. And at that point, optimism begins to look suspiciously like delusion.

Since 1977, when Gallup started asking people if they thought they’d be better off the following year, a huge majority have said yes. A 2005 poll revealed that even though only 2 percent of Americans describe themselves as rich, 31 percent thought it very likely or somewhat likely that they would “ever be rich.” And as in most religions, those who have the least are the most devout. Despite entrenched and growing inequality, the poorer people are, the more optimistic they are likely to be about their future financial health.

The sixtieth anniversary of Brown v. Board of Education, the landmark Supreme Court decision that struck down school segregation, offers yet another chance to gauge the progress toward racial equality in America. During this bumper period of civil rights commemorations—the current decade presents a litany of markers, from the uprisings in Birmingham to Martin Luther King’s assassination—the official mantra rarely changes: we have come a long way, but we have further to go. “To dismiss the magnitude of this progress…dishonors the courage and the sacrifice of those who paid the price to march in those years,” said Barack Obama, celebrating the March on Washington last year at the Lincoln Memorial. “But we would dishonor those heroes as well to suggest that the work of this nation is somehow complete.”

Who could argue with that? Half a century ago, America was officially an apartheid state, with black people denied the basic rights of citizenship in large swaths of the country. Then the signs came down; the laws were overturned; the doors to the polling stations were prized open. The notion that the work is proceeding perpetuates the myth: America has no reverse gear—we just keep going forward.

But the awkward truth is that when it comes to the goals laid down by the civil rights movement in general and Brown in particular, America is actually going backward. Schools are resegregating, legislation is being gutted, it’s getting harder to vote, large numbers are being deprived of their basic rights through incarceration, and the economic disparities between black and white are growing. In many areas, America is becoming more separate and less equal.

According to research recently conducted by ProPublica, “black children across the South now attend majority-black schools at levels not seen in four decades.” A recent Nation article illustrated how this trend is largely by design. In suburbs across the region, wealthier whites have been seceding from their inner- city school districts and setting up academic laagers of their own. The result is a concentration of race and class disadvantage in a system with far fewer resources. In a 2012 report, UCLA’s Civil Rights Project noted: “Nationwide, the typical black student is now in a school where almost two out of every three classmates (64%) are low-income.”

The discrepancy between black and white unemployment is the same as it was in 1963. According to the Institute on Assets and Social Policy at Brandeis University, between 1984 and 2007 the black-white wealth gap quadrupled. The Supreme Court is dismantling affirmative action and gutting voting rights. Meanwhile, incarceration disparities are higher than they were in the 1960s. And as Michelle Alexander points out in The New Jim Crow: “Once you’re labeled a felon, the old forms of discrimination—employment discrimination, housing discrimination, denial of the right to vote, denial of educational opportunity, denial of food stamps and other public benefits, and exclusion from jury service—are suddenly legal. As a criminal, you have scarcely more rights, and arguably less respect, than a black man living in Alabama at the height of Jim Crow. We have not ended racial caste in America; we have merely redesigned it.”

This is not to say that we have literally reverted to a bygone era. “No man ever steps in the same river twice,” goes the proverb. “For it’s not the same river and he’s not the same man.” We have a black president, a black attorney general and a black editor of The New York Times; there’s a growing trend to interracial relationships; suburbs are becoming more diverse. If the civil rights movement had been about getting black faces in new and high places, its work would now be done. But it wasn’t. It was about equality. And the problem is not that we still have a great deal of progress to be made or that progress is too slow—it’s that we are regressing.

This is not the first time this has happened. After the abolition of slavery, there was a brief period during Reconstruction when African-Americans made great strides, followed by a full-scale retrenchment in the South with the advent of Jim Crow. “The slave went free,” wrote W.E.B. Du Bois. “Stood a brief moment in the sun; then moved back again toward slavery.” In his speech, Obama acknowledged that “we’ll suffer the occasional setback.” But there’s nothing “occasional” about this: the current reversals in the achievements of the civil rights era are akin to those after Reconstruction. That period lasted almost ninety years, and it took a mass movement to end it.

King saw this coming. After he was booed by young black men at a meeting in Chicago in 1966, he reflected, “For twelve years, I and others like me had held out radiant promises of progress, I had preached to them about my dream…. They were now hostile because they were watching the dream they had so readily accepted turn into a frustrating nightmare.” In some quarters today, this would be considered blasphemy.