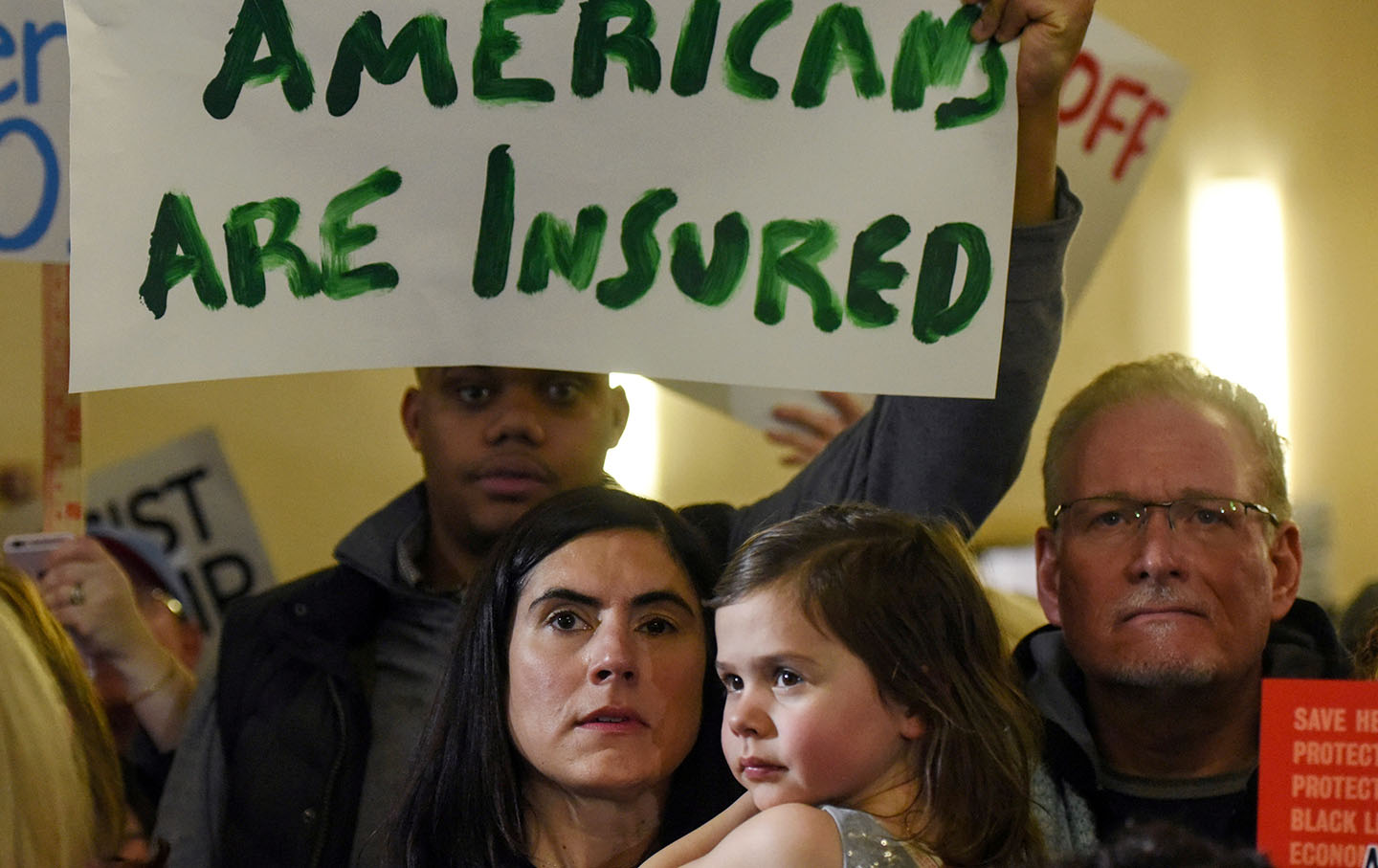 People demonstrate against the repeal of the Affordable Care Act during the First Stand Rally in Newark, New Jersey, on January 15, 2017. (Reuters / Stephanie Keith)

While the health care–reform debate raged over the last eight years, a quiet progressive victory made lives better for millions of people with surprisingly little controversy—the simple idea that mental health should be taken as seriously as physical health. That’s because a broad coalition of advocates ensured that the Affordable Care Act included the concept of “mental health parity”—meaning insurance providers must provide equality in services for mental- and physical-health care.

But now the Trump administration threatens to just as stealthily unravel the modest gains in mental-health equity by shredding the ACA, sinking those millions deeper into silent despair.

The ACA required both private insurance and state-subsidized Medicaid plans to offer mental health and substance-abuse treatment as an essential benefit—a core safeguard for parity. According to Andrew Sperling, legislative director of National Alliance on Mental Illness (NAMI), though it is unclear what parts of the ACA might be repealed, if the 20 million people who benefited directly from Obamacare lose coverage, mental-health patients would suffer because “there would be fewer plans out there that would be required to comply” with essential-benefit mandates. Parity for zero is still zero. “Obviously, if you don’t have a health plan, you can’t be in compliance with parity.”

After initial repeal through a budgeting process, more damaging cuts may loom ahead. Lawmakers could completely scrap the essential-benefit mandate, pushing mental-health patients into a private individual market that, aside from limited state regulatory protections, may be free to massively discriminate against their conditions.

With or without insurance, mental health currently swallows a growing chunk of federal health-care expenditures, septupling between 1986 and 2005, soaring to some $36 billion annually. The chronically underfunded system covers a quarter of the country’s behavioral health-care costs, from methadone clinics to family counseling. In 2011, nearly 10 million beneficiaries had behavioral health diagnoses. On average, their care cost about triple the spending on other patients.

It’s easy to see how such a stigmatized, misunderstood field of disorders would be one of the first essential areas to be slashed. However, Congress did help improve federal enforcement measures by passing the 21st Century Cures Act. The bill was criticized for its concessions to Big Pharma, but other provisions targeted resources for substance abuse treatment, compliance enforcement for mental health–parity standards, programs for youth mental-health care, and emergency substance-abuse treatment.

Nonetheless, vast inequalities in health care persist, even though millions more are now nominally “insured.” According to a national survey by NAMI: “One in four respondents did not have a mental health therapist in their health plan’s network,” and respondents “were about 70 percent more likely to report having difficulty finding a prescriber who would accept their insurance compared to other types of specialty medical care.” For more severe cases needing residential treatment, “People were close to 2.5 times more likely to have trouble finding a psychiatric hospital that would accept their insurance compared to other types of hospital care.” And since with more mental-health patients paying out-of-pocket costs of $200 or more compared to regular medical patients, even in a crisis situation, it costs more to heal one’s mind than to fix their body.

Trump has not ignored mental-health concerns, and has in fact called for more emphasis on treating opioid addiction, and strengthening veterans’ mental health–care access. However, the overarching thrust of his health care–reform agenda is to let the market do the work. An increasingly profit-driven, deregulated system would simply price out the most vulnerable.

Currently, unmet mental health–care needs are already overwhelming clinical institutions. At the start of Obama’s second term, some 91 million people residing in areas deprived of mental-health care, especially rural and poor communities, with an estimated gap of more than 1,800 psychiatrists, along with nearly 6,000 other practitioners. So when you need to check into a hospital after having a psychological crisis, expect a few more breakdowns while waiting years for your number to come up on the waiting list.

One respondent described how a mental-health crisis ensnared his family: “[My relative] has had terrible trouble finding a psychiatrist in our community. He has been traveling 50 miles each way to see a psychiatrist. The wait lists for all psychiatrists locally are between six months and two years.”

For marginalized groups, further erosion of mental-health care would have devastating civil-rights ramifications for impoverished and underserved communities. Chronic depression, anxiety, and drug abuse gnaw away at distressed families and youth. Prison systems are crowded with failures of the health-care system, as are the ugly inequities in the special-education system that subject children of color to arrest, incarceration, and violence instead of needed treatment and developmental support.

It’s possible that with political inertia, some components of the ACA will remain intact. But advocates warn that repealing and even replacing it would return the system to the status quo of discriminatory and costly privatized plans, the so-called “free-market” solutions. According to Jennifer Matthis, director of policy and legal advocacy with Bazelon Center for Mental Health Law, even if lawmakers replace Obamacare, which, despite its shortcomings, did enhance community-based mental-health coverage, a more deregulated replacement plan would fall short of the Medicaid program’s scope.

Even if some parity guidelines are preserved, people would revert back to “standard commercial insurance that offered precious little in the way of needed services for people with significant psychiatric disabilities.” While the Cures Act promises reforms, Matthis adds, “it certainly is hypocrisy to talk about improving mental-health services in one breath and to take away virtually all of the funding for those services in the next.”

In policy debates, mental-health issues have historically been neglected, stigmatized, or criminalized. But today the crisis is bleeding into public life through our politics, as revealed in the despair many voiced during the campaign season about families suffering depression and communities ravaged by heroin addiction. The atmosphere of anxiety was exacerbated by Trump’s own bloviating aggression and bigotry.

For millions struggling to heal not only sick bodies but also shattered minds, a depressing political climate is about to trigger a nationwide breakdown.