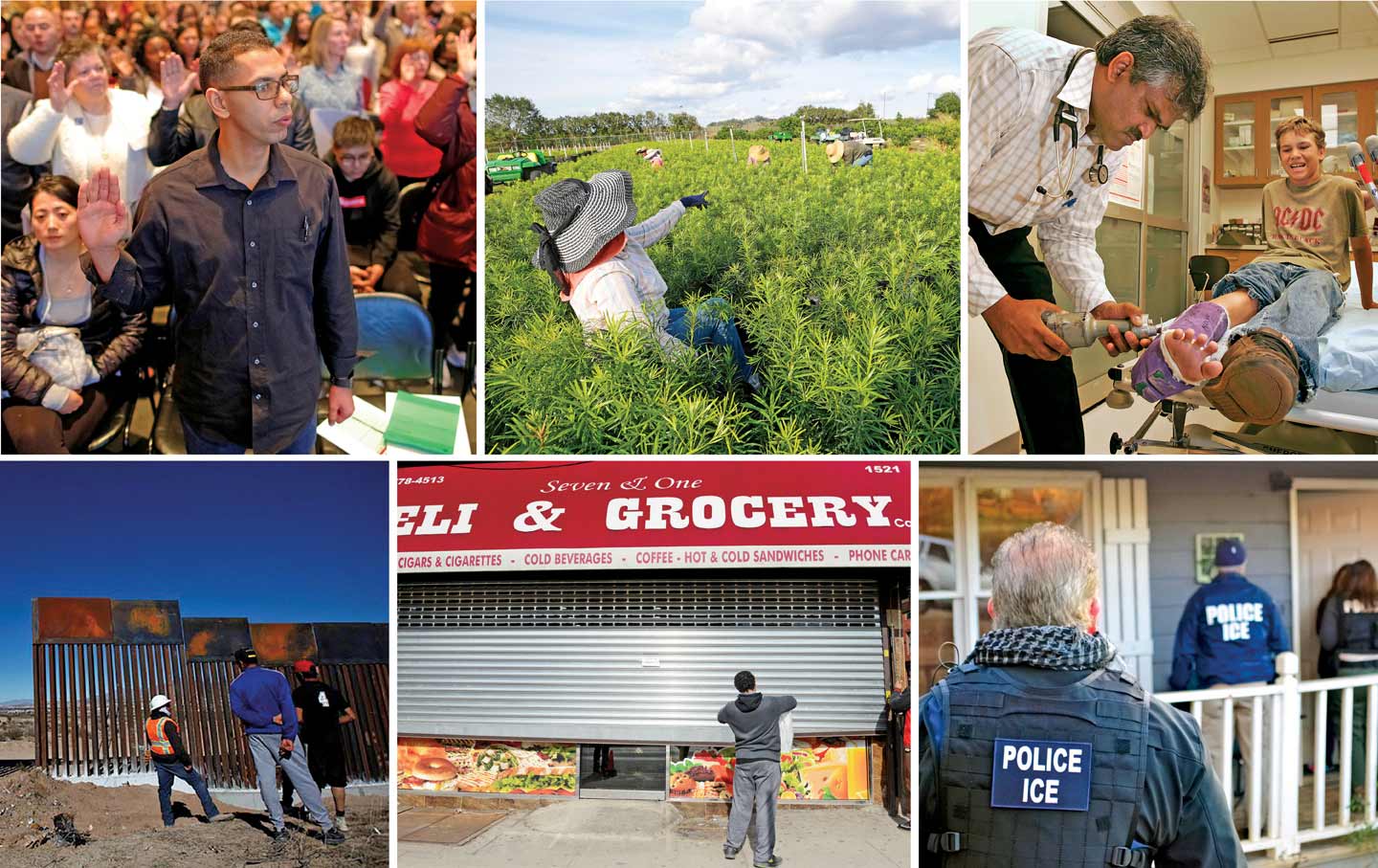 President Trump has promised to add millions of “good jobs” to the US economy and to raise the gross domestic product by more than 4 percent annually, at one point asserting: “I think we can do better than that”—as much as 6 percent. “This is the most pro-growth, pro-jobs, pro-family plan put forth in the history of our country,” he proclaimed.

At the same time, the president has vowed to deport up to 3 million undocumented immigrants and to curtail future entries, branding immigrants as “gang members,” “drug dealers,” and “bad hombres.” After his January 27 travel ban on people from seven Muslim-majority countries was blocked by the courts, Trump devised a toned-down version applied to six of them—even though his own Department of Homeland Security has concluded that “country of citizenship is unlikely to be a reliable indicator of potential terrorism.”

Trump’s economic promises verge on the delusional. Most economists think even his 4 percent boast is unrealistic, and any hopes for economic growth will be undercut by his deportation plans. In 2016, GDP grew by only 1.6 percent; since 2009, capital growth has increased by only 1.1 percent. We may get a temporary surge from tax cuts and infrastructure spending, but the Congressional Budget Office estimates in its January 2017 Budget and Economic Outlook report that from 2017 to 2027, GDP will grow at an average annual rate of only 1.9 percent. New York Times economics reporter Nelson Schwartz describes Trump’s 4 percent target as “audacious at best and fanciful at worst.”

Trump’s promise to restore good manufacturing jobs to the Rust Belt is also dubious. Because of globalization and automation, few such jobs will return. For example, Trump boasts that he saved 1,000 (actually, fewer than 800) jobs at the Carrier air-­conditioning plant in Indiana, but in a few years automation will kill many of those jobs anyway. By 2011, the auto industry was producing just as many cars as before the Great Recession, but with 30 percent fewer workers because of the increased use of robots and computers. As the Times’s Eduardo Porter concludes, “No matter what [Trump] does, he cannot bring back the coal jobs of yore or the old labor-intensive manufacturing economy.”

Deporting millions of undocumented immigrants will only make things worse. Economic growth requires a large workforce and increasing productivity. But the American population is aging, so we need more young workers. The number of Americans over 60 is expected to increase by more than 22 percent during the current decade, reducing our annual growth by 1.2 percent. And productivity has slowed down markedly in the past 15 years.

Aging has cut our birth rate as well. In 2015, the United States saw its lowest population growth since the Great Depression—and whatever growth we did have was from immigrants. In 2014, immigrant women accounted for about 900,000 US births, more than tripling the 1970 number, while births to US-born women fell by 11 percent. The foreign-born accounted for 23 percent of all babies during that period.

Trump’s harsh assault on undocumented immigrants will damage us in many key areas. Much of our recent growth has been in service occupations like retail, hospitality, home care, and health care; the Labor Department expects demand for home health-care aides in particular to rise by 40 percent in the next decade. Over 40 percent of undocumented immigrants are in these occupations.

These immigrants also comprise most of the laborers in agriculture and related industries, like dairy farming. Agriculture Department surveys in 2007 and 2009 found that almost half of these workers were undocumented, and the figure is higher in other sectors. “If you only have legal labor, certain parts of this industry and this region [California’s Central Valley] would not exist,” says fruit farmer Harold McClarty. Many local businesses in these areas—restaurants, clothing stores, insurance agencies—would close. As one Washington, DC, restaurant owner put it, “Honestly, without immigrants, the restaurant industry wouldn’t exist.”

To spur growth, Trump plans to spend many billions on roads, sewers, and other infrastructure; housing is also recovering. This will require many construction workers, and there aren’t enough now—about 200,000 construction jobs are unfilled today, a rise of 81 percent in just the last two years. This has slowed the revival of the housing market as well as the overall economy. The shortage of construction workers will get worse because of Trump’s immigration policies—which, ironically, could even frustrate the construction of his “beautiful wall.”

Trump’s policies have also dismayed many in the tech sector and in science, medicine, and academia, all of which depend heavily on highly educated and skilled immigrants. For example, 42 percent of doctor’s-office visits in rural America are with foreign-born doctors, because immigrants must work in medically underserved areas like small towns, poor cities, and rural regions in order to stay here after their residencies or internships expire. Trump’s revised travel ban could immediately degrade patient care: Currently, more than 12,000 doctors in these communities are from two of the countries covered by the ban—almost 9,000 from Iran and 3,500 from Syria.

American universities and students will also suffer from Trump’s exclusionary policies. We now have about 1 million foreign students, 5 percent of our total enrollment; Iran alone accounts for more than 12,000. Apart from academic contributions, foreign students pay full tuition and other fees. Loss of this income would probably force a tuition increase for American students, since most universities, especially the public ones, are already financially strapped. A ban on foreign faculty and students will also undermine our educational and research capacities, threatening our leadership in these areas.

Opponents of immigration claim that immigrants take jobs from Americans and drive down wages. There is some truth to this, but not much. American citizens simply don’t want many of the jobs now held by immigrants. “No feasible increase in wages or change in conditions would be enough to draw native-born Americans back into the fields,” says Jeff Marchini, a fourth-generation radicchio farmer in California, and farmers in Florida and elsewhere agree. This also holds true for our construction-worker shortage. These jobs pay an average of $27 an hour, but American workers don’t want them—they are hard, unpleasant, and not steady.

Trump’s deep cuts in refugee-acceptance programs also undermine his rosy promises of economic growth. Refugees have helped revitalize cities like Buffalo, New York, which have struggled with obsolete industries and dwindling populations for decades. Nonetheless, Trump insists that he will deport millions of undocumented residents, and in early February, immigration agents began by arresting 678 people in 12 states. Although the DHS insists this was “routine,” many of those arrested were minor offenders or even people whose only offense was being undocumented: 26 percent had no criminal record other than their illegal entry, which under US law is a misdemeanor unless repeated. None of them would have been deported under President Obama’s “serious crimes” policy.

In fact, immigrants commit fewer crimes than the native-­born: Only 820,000 of the 11 million undocumented have any criminal record, and only 690,000 have committed serious crimes. The Obama administration relied heavily on local cooperation to apprehend the latter, but many of these communities are now in sanctuary cities. They will certainly not cooperate, which poses what one Immigration and Customs Enforcement supervisor calls “perhaps [the] biggest challenge” for the agency.

Among the most frightening of Trump’s new deportation directives is the expansion of “expedited removal.”

The difference between the Trump program and Obama’s is illustrated by Guadalupe García de Rayos, a 35-year-old Phoenix wife and mother of two American-born teenagers. Rayos, who has lived here for 21 years, was convicted of using a fake Social Security number eight years ago—a common offense among the undocumented—in order to become a janitor at an amusement park. Obama’s DHS allowed her to stay despite a deportation order, but required her to check in annually with ICE, which she did. When Rayos showed up at ICE’s offices in early February, however, she was arrested and promptly deported to Mexico. Her family is now without a wife and mother. And according to DHS Secretary John Kelly’s February directives on deportation, all undocumented immigrants are deportable [see Julianne Hing, “ICE Amps Up,” March 20].

One group not intended to be affected by the directives so far are the Dreamers, 750,000 young people who were brought here as children and are currently in school or in the military. Under Obama’s Deferred Action for Childhood Arrivals (DACA) program, they have temporary but renewable permission to stay and work. That can easily change, however: The new directives state that deportation relief must be determined on a case-by-case rather than class basis. Also, the Dreamers provided the federal government with personal information under a promise of privacy, but Trump’s DHS directives abolish privacy rights for all undocumented immigrants.

Among the directives’ most frightening provisions is an expansion of the “expedited removal” procedure—quick deportation without a judicial hearing. Under Obama, this procedure was used only for those here less than two weeks and found within 100 miles of the border. Kelly’s new orders extend it to people anywhere in the country who have been here for up to two years.

Over 10 million immigrant families have at least one undocumented member, and as a result of these directives, the immigrant community is terrified. In New York, Florida, New Jersey, Arizona, and elsewhere, immigrants are staying off the streets and out of the stores and shopping malls, which is already damaging local economies. Children are being kept home from schools; exploited workers have become even more vulnerable; and law-enforcement officials worry that the immigrant community will no longer cooperate with them.

However, it’s unlikely that Trump will be able to deport several million immigrants, at least in the foreseeable future, given the dire shortage of immigration agents, judges, and courts. Kelly does plan to hire thousands of new ICE and Border Patrol agents, but that will take time and many billions of dollars. And congressional Republicans may balk at the latter, especially since Trump hasn’t indicated where the money will come from.

Trump’s economic and immigration policies are dishonest, stupid, and cruel. His deportation and exclusion orders violate a principle fundamental to every civilized society and honored until now by both Democrats and Republicans: keeping families together. If stone and metal could cry, the Statue of Liberty would be weeping.