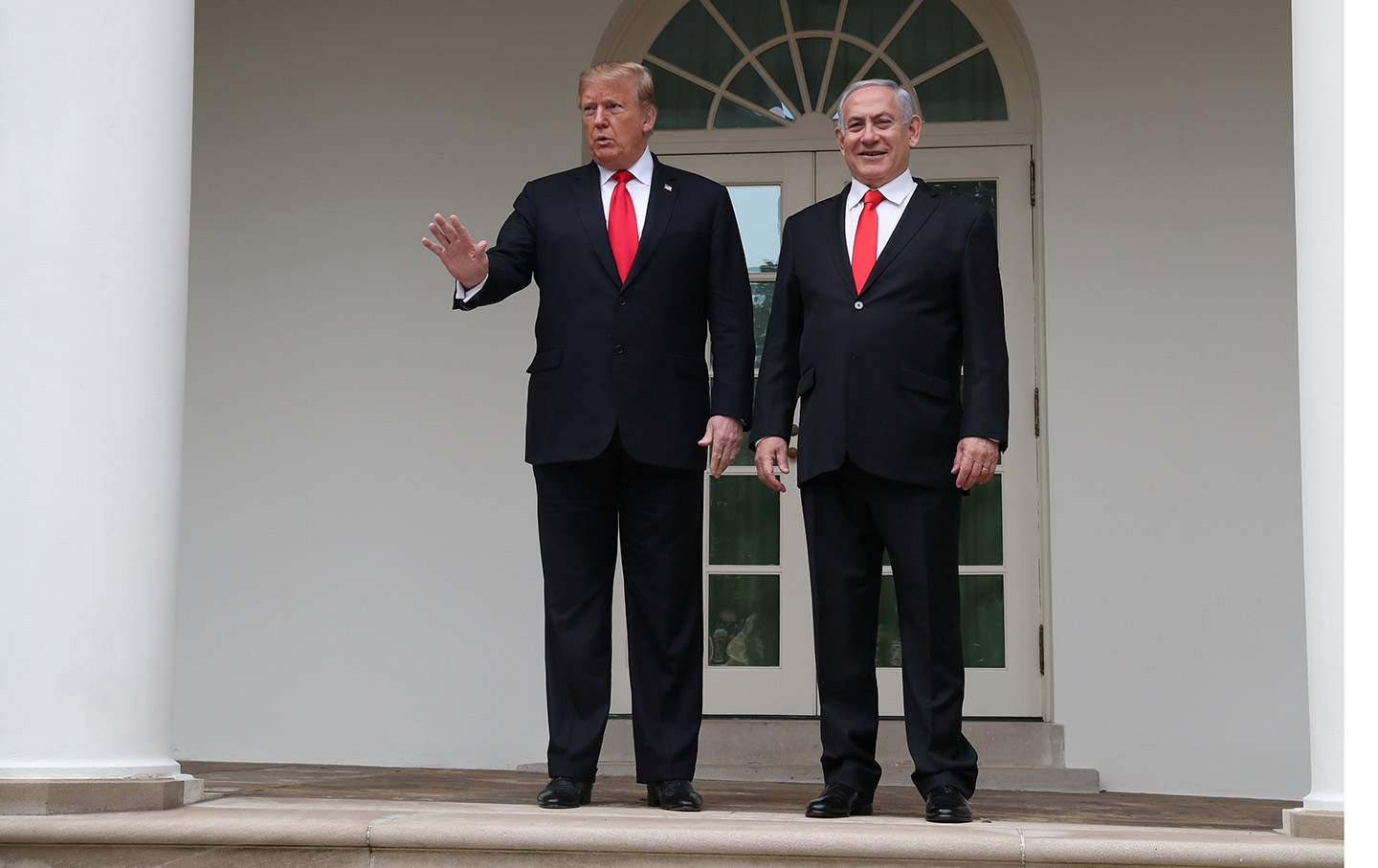 President Donald Trump waves as he poses with Israel’s Prime Minister Benjamin Netanyahu in the Rose Garden as they meet at the White House on March 25, 2019. (Reuters / Carlos Barria)

The similarities between the personal and political styles of Donald Trump and Benjamin Netanyahu are so powerful as to feel supernatural. Yet the likenesses are structural as much as they’re stylistic. Both men rule as aspiring autocrats in increasingly illiberal democracies, and in this respect, each is a cause as well as a symptom of the same degenerative disease that afflicts the political cultures of the United States and Israel.

The most obvious similarity is that both leaders give every evidence of having engaged in criminal behavior. For Trump, ignoring the law has always been his MO; for Bibi, it’s the result of his unquenchable lust for power.

To save themselves from prosecution, both peddle wild conspiracy theories about witch hunts driven by ideology, lawlessness, ambition, and—when it comes in handy—treason. Trump made that accusation against myriad members of the FBI, and he seems to be obsessed with its former director James Comey, who he recently tweeted “is a disgrace to the FBI & will go down as the worst Director in its long and once proud history.” For Bibi, as with Trump, there are so many plotters that it’s a full-time job just to keep up. But put his words into Trump’s mouth and it’s a normal White House sound bite. Bibi, as the poor fellow said about himself, is “the most maligned man in the history of Israeli media,” persecuted by “the media, the left and judicial functionaries.”

No less significant in the Bibi-Trump playbook is their demonization of minorities and immigrants. Not only do both men encourage violence among their most fanatical followers, but they also pretend that the political participation of Israel’s Arabs (in Netanyahu’s case) and immigrants and Muslims (in Trump’s) poses a threat to the Jewish (in Israel) and white (in the US) majorities. During Israel’s 2015 election, Netanyahu issued a panicky “emergency livestream” on Facebook, warning his followers that “Arabs are coming out to vote in droves.” Trump did the same with his outrageous claim that his loss of the 2016 popular vote was due to illegal voting by undocumented immigrants.

Ironically for Netanyahu, given that he is the prime minister of a Jewish state, but also for Trump, who is constantly accusing Democrats of being “totally anti-Israel” and “anti-Jewish,” neither man is above exploiting the anti-Semitism that has grown to epidemic proportions on the right. For Netanyahu, this means cozying up to like-minded autocrats who, in places like Hungary and Poland, blame a globalist Jewish conspiracy for their woes, with George Soros as the most prominent target. Netanyahu has given a pass to the people making these attacks—thereby endangering diasporic Jews—and in Soros’s case even cheered them on. Meanwhile, Trump’s commercials and those of the Republicans have likewise focused on Jewish financiers of the Democratic Party, especially though not exclusively on Soros.

What enables this malevolence is a mass-media apparatus that purposely drives this sort of politics. Here, of course, Trump enjoys the slavish devotion of Rupert Murdoch’s Fox News and countless other outlets that parrot his every claim—when they are not scripting them in advance. Israel’s Murdoch is casino magnate Sheldon Adelson, who is the unofficial czar of the Republican Party’s Israel-related policies, owing to the munificent amounts of money he and his wife contributed in recent years ($113 million in 2018 alone).

In Israel, Adelson and his wife, Miriam Adelson, an Israeli native, founded Israel Hayom in 2007, a free tabloid dedicated to the proposition that Netanyahu can do no wrong and anyone who disagrees is pushing what both Trump and Bibi call fake news. Adelson’s rag has the highest circulation in the country, no doubt because of its free distribution, but it was still not enough for Netanyahu. He wanted to do more to undercut what he describes as “the leftist media,” which he deems to be “on a Bolshevik witch hunt and is engaged in brainwashing and character assassination against my family and myself.” Netanyahu has lassoed a small cable outlet, the Heritage Channel, to do for him what Fox et al. do for Trump. Its familiar-sounding slogan is “Really balanced television,” and it traffics in the same sort of nonsense about Netanyahu’s opponents that one hears about Democrats from Tucker Carlson, Laura Ingraham, Sean Hannity, and the bozos on Fox & Friends.

The scandals that will likely lead to Netanyahu’s indictment—and from which he desperately tried to get immunity by attempting (but failing) to form a new government—partly derive from overreaching in his attempt to control the media. The circumstances are far too convoluted to explain here, just as Trump’s Russiagate shenanigans and his apparent obstruction of justice occupied special counsel Robert Mueller for 448 pages (and that only skimmed the surface of Trump’s likely crimes and misdemeanors).

One day we may see both men in prison. The Israeli judiciary has so far survived Netanyahu’s attempts to defenestrate it, and ours shows signs of life as well. But what is not going away are the forces that Bibi unleashed and that have carried him to the pinnacle of power enjoyed by no other Israeli politician, perhaps, since the nation’s founding. One recent survey cited in the Columbia Journalism Review found that “77 percent of Likud voters believe that the media is unfair. What’s more, almost 90 percent of religious and ultra-Orthodox Israelis say that the media in Israel has been attempting to overthrow Netanyahu. By contrast, 87 percent of the leftist Labor party thinks that the media is fair.” These numbers mirror those in the US, where roughly three-quarters of Democrats express significant trust in the mainstream media, while barely a fifth of Republicans do. Those numbers are a license to lie—and ultimately destroy a democracy in the process.