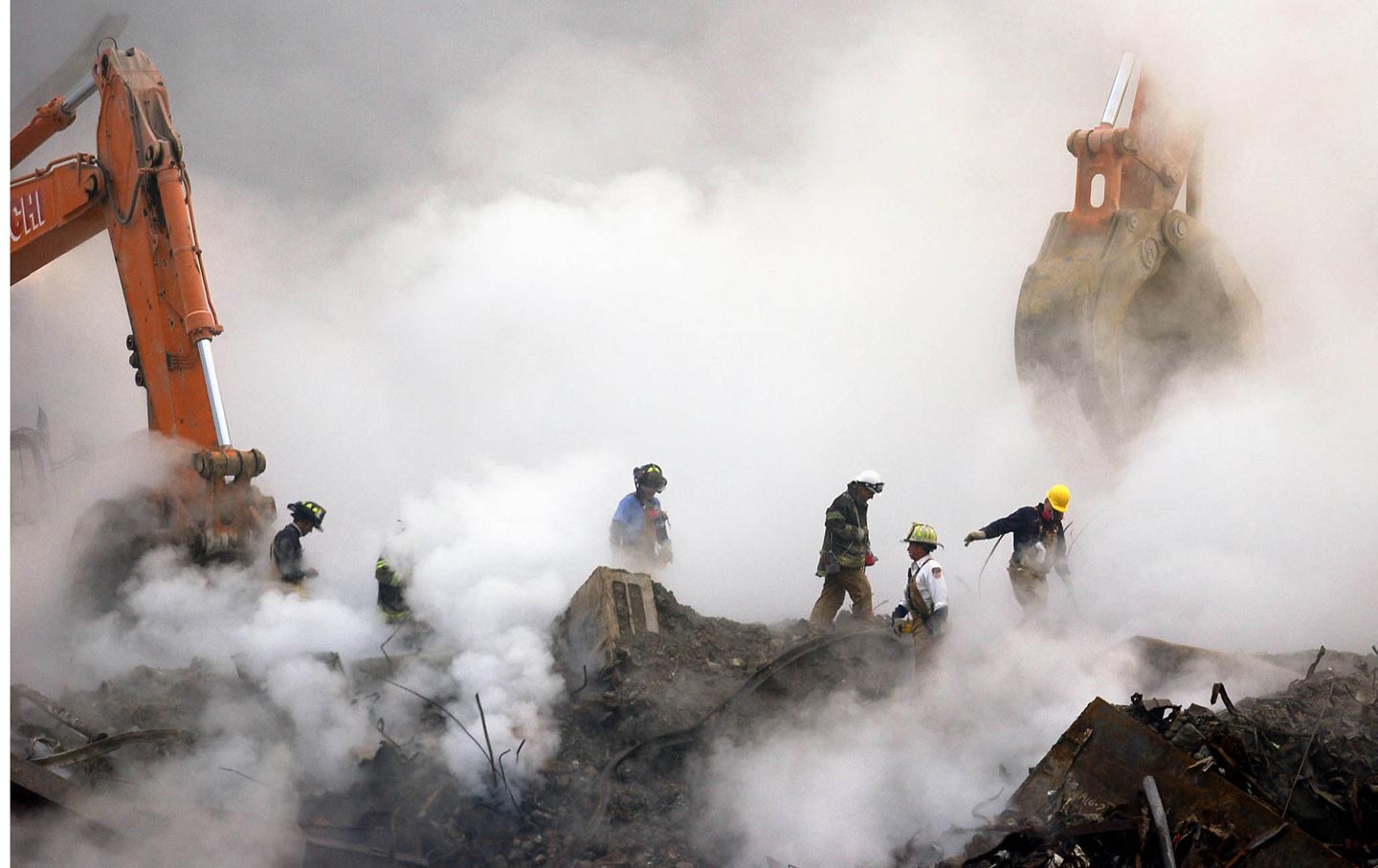 In this October 11, 2001, file photo, firefighters make their way over the ruins and through clouds of smoke at the World Trade Center in New York. (AP Photo / Stan Honda, Pool, File)

Donald Trump’s seemingly impassioned defense of New Yorkers’ courage in the face of 9/11 at the GOP debate last night has made the media swoon, and possibly nailed him the nomination.

“That was heart,” Mika Brzezinski said on Morning Joe this morning. It “Proves Donald Trump Is Human,” a video on MSN hailed. Even conservative Trump foe Charles Krauthammer declared, “That was the moment of the debate. That was a moment where Trump clearly had won.”

But that win is based on one of Trump’s grander fake-outs. What Trump didn’t say, and what most media haven’t mentioned, is that his emotional attachment to New Yorkers’ bravery has never extended to guaranteeing healthcare for the first responders to the tragedy, the one he so successfully made his own last night. (big h/t to Michael McAuliff)

Trump’s 9/11 spiel came, of course, after Ted Cruz attacked him for his “New York values.” Cruz was winking at South Carolina and Iowa voters because they know what those values are—New Yorkers will take your guns, turn you gay, hand out free abortions, and Jesus knows what else.

Wow, I thought at first, Cruz is out-demagoguing the champ. But then Trump came right back at him, and with a lot more than a noun, a verb, and 9/11:

New York is a great place. It’s got great people, it’s got loving people, wonderful people. When the World Trade Center came down, I saw something that no place on earth could have handled more beautifully, more humanely than New York. You had two one hundred…

…you had two 110-story buildings come crashing down. I saw them come down. Thousands of people killed, and the cleanup started the next day, and it was the most horrific cleanup, probably in the history of doing this, and in construction. I was down there, and I’ve never seen anything like it.

Cruz looked mortified, and Trump’s prospects look better than ever. Standing up for New York could easily gain him more Democratic votes, maybe even win him the deep-blue state.

But here’s the thing: When it came to actually doing something for the people who fought and fought amid the smell of death, Donald Trump has done nothing. Maybe worse than nothing—he’s ignored them.

With the 2016 campaign in full swing, 9/11 first responders were desperately trying to get Congress to extend the health benefits they had won in a 2010 bill. Without Congress reauthorizing the program, doctors couldn’t plan on the continuity of care for some 33,000 ailing responders, many with cancers caused by the toxins at Ground Zero. Many had already died. Citizens for the Extension of the James Zadroga Act, a coalition of 9/11 first responders, survivors, advocates, and unions, sent letters to all the presidential candidates, asking them to urge Congress to pass the James Zadroga 9/11 Health and Compensation Act. This is the effort that Jon Stewart fought so hard to pass.

The three Democratic candidates answered “yes,” that they’d support the bill, but the only top-tier Republican candidate to say yea was Marco Rubio. Donald Trump didn’t even bother to respond to the letter, or to a second letter, much less support the bill on his own.

“As a lifelong New Yorker, I fully expected Donald Trump to respond back,” Richard Alles of the Uniform Fire Officers Association told me. “I was shocked when he didn’t.

“Now he’s talking about the heroism and how great New Yorkers are, and he wants to be leader of our nation—but he can’t even answer a simple yes-or-no question? Everything he was saying last night was a farce, they were meaningless words.”

Alles, one of the first responders who lobbied for the bill with Stewart in Washington, adds, “Trump is even more accountable than the others, because he’s a New Yorker.”

A former Hill staffer who worked on the bill was also taken aback at Trump’s I-love-New York performance last night. “Trump had an opportunity to lead when it mattered and he never did,” he says. “We were fighting this fight since April, when the bill was introduced, through December. He never uttered a word. When the health of 9/11 first responders was on the line, Trump was silent.”

And moneywise? According to the Smoking Gun, the multibillionaire “did not make a single charitable donation to any of the not-for-profit groups that provided aid to survivors, rescue workers, or the families of cops and firemen who died trying to save others, Internal Revenue Service records show.”

After the 9/11 coalition got little GOP response from the first letter, “we sent a second one, and spoke with a couple people in the Trump campaign,” Alles said. “We took out a full-page ad in the Milwaukee paper before the first Fox Business debate [in November], as a prompt to the moderators to ask the question.” But they didn’t then, and moderators Maria Bartiromo and Neil Cavuto didn’t last night. “These are savvy media people who know what everyone’s doing. Maybe there are time constraints. But speaking as a 9/11 first responder, we all of us take exception when politicians try to use that day to wrap themselves in the flag.”

Not all New York media were impressed by Trump’s salute to New Yorkers. Brian Lehrer, host of a popular WNYC radio show, said today that Trump sort of reduced “New York values” to resilience, while ignoring all the other New York values—like being pro-choice, supporting Black Lives Matters, and other liberal issues that dare not be praised on a GOP debate stage.

In December, the Zadroga Act finally did pass, but only after the 9/11 coalition and Jon Stewart embarrassed enough Republicans to allow it into the omnibus spending bill.

One of Stewart’s embarrassment tactics may have especially helped. He had already visited Trevor Noah’s Daily Show with several of the surviving first responders, but it didn’t seem to pierce through all the campaign noise, mostly by and about Trump. So two days later, Stewart went on the Colbert show and donned a Donald wig to “channel” Trump. He explained that the only way anyone would pay attention to the Zadroga bill would be if Donald Trump talked about it.

When the fake Trump exhorted Congress to pass the bill, it did indeed get more attention. But the real Trump never said a thing.

Watch the fake one here:

Editor’s Note: An earlier version of this story incorrectly stated that Marco Rubio and Lindsey Graham were the only Republican candidates to support the Zadroga bill. In fact, Mike Huckabee and George Pataki also did. First responder Richard Alles did not appear on the Daily Show, as earlier stated, though he did lobby extensively with Jon Stewart in Washington.