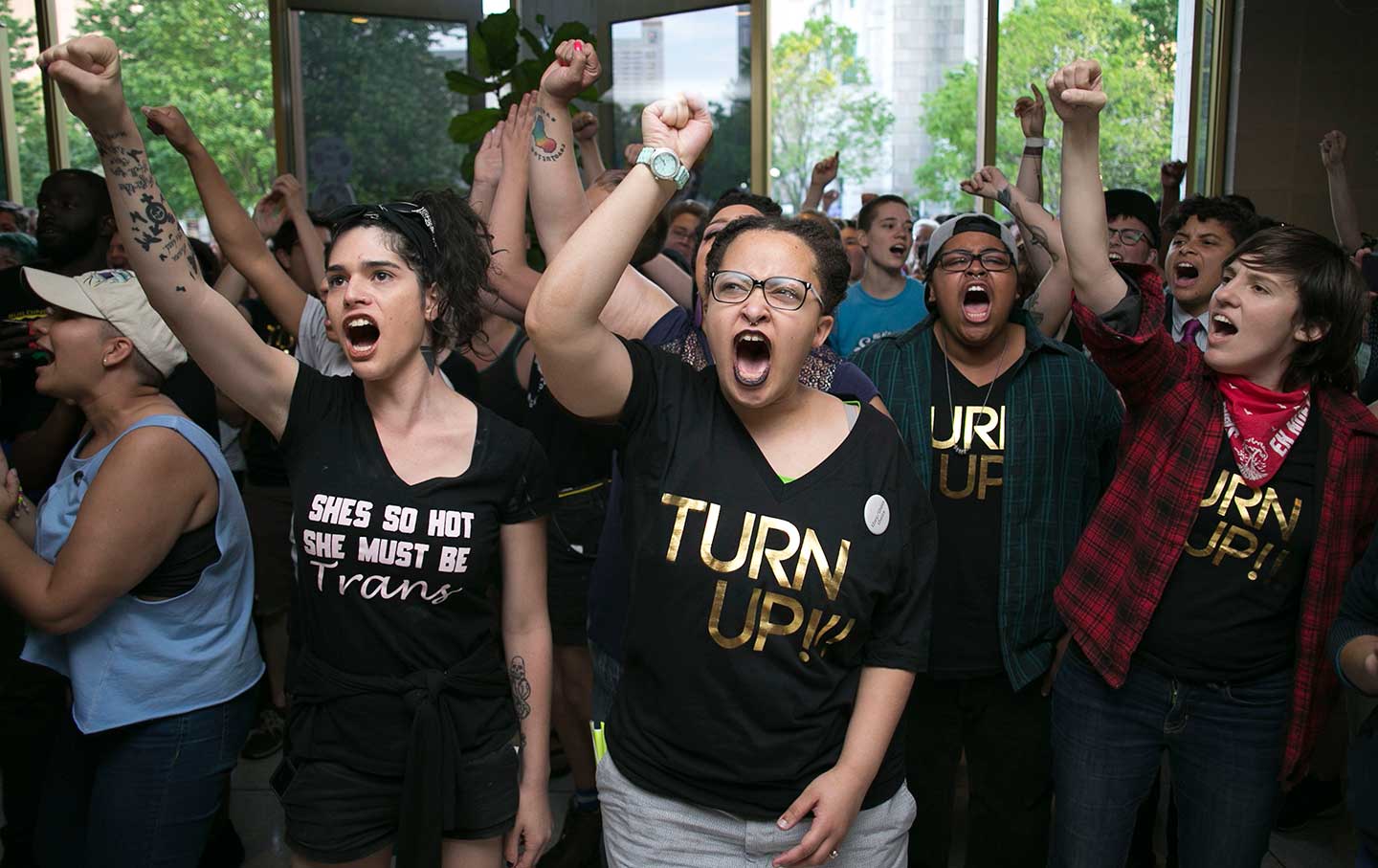 Protesters chant in opposition to House Bill 2 during a protest in the lobby of the State Legislative Building in Raleigh, North Carolina, April 2016. (Robert Willett / The News & Observer via AP)

Kyle Smith is the sort of civic-minded person who spends an entire summer vacation volunteering around the clock for the cause he cares about.

A 10th-grade geometry teacher who was partially raised and still resides in the small Arkansas city of Fayetteville, Smith led an effort last year to pass a local ordinance that would bar discrimination against LGBTQ people in housing, employment, and public accommodations.

Amid the sticky heat of a Southern summer, he and his team at For Fayetteville, a grassroots collective of progressive city residents, licked hundreds of envelopes and knocked on hundreds of doors. They developed a social-media strategy and recorded radio spots. They collected signatures at the Saturday farmers’ market and spoke to clergy and community groups and the local chamber of commerce.

They sought to uproot the most material forms of homophobic and transphobic bigotry, to create options for queer people in Fayetteville.

“We threw a big party at the campaign office that night,” Smith says. “The next morning, everyone went back to their day jobs.”

The celebration was short-lived, however.

One year earlier, as nondiscrimination ordinances were popping up all around the country, the state legislature established a law, Act 137, that effectively prevented city officials from passing new civil-rights protections for their LGBTQ constituents. The Arkansas Attorney General, Leslie Rutledge, a Republican insider and Mike Huckabee acolyte, used Act 137 to take Fayetteville and its new ordinance all the way to the state Supreme Court. She means to undo the city’s accomplishment.

“It is almost vengeful,” says Smith, who anticipated the ongoing legal challenge from the start. “It is not only frustrating, residents here in town get the feeling it’s personal, too.”

State officials, its seems, want to punish Fayetteville, a bustling university town, for its welcoming political values and liberal reputation. But the city’s struggle is not an isolated case. Though it’s little consolation, Fayetteville is among dozens of cities facing an overbearing antiprogressive backlash against their attempts to expand opportunity, fight discrimination, and demand justice for their residents.

Bills like Act 137 are all the rage these days in reactionary legislatures across the nation. From Florida to Ohio to Arizona and beyond, Republican-dominated states are hell-bent on preventing municipal governments from passing progressive ordinances on a range of issues, including the minimum wage, paid family leave, civil rights, municipal broadband, public health, and pollution. To do so, they have championed “preemption” laws that nullify or otherwise limit city authority to legislate in the local interest.

You’ve likely heard of North Carolina’s HB2, the most notorious preemption law to ooze forth from a state capital in recent years. The so-called 2016 “bathroom bill” barred transgender people from using public restrooms that correspond with their gender identity. Besides overriding a nondiscrimination ordinance that had been enacted recently in Charlotte, the bill also eradicated municipal authority to pass LGBTQ civil-rights legislation as well as to hike the minimum wage and even strengthen child-labor protections. Although the latter provisions got little attention, the bathroom ban sparked a national boycott of North Carolina and helped lead to Governor Pat McCrory’s electoral defeat last year. Just this past Thursday, North Carolina’s legislature voted to roll back HB2 and replace it with a “compromise” law that many have denounced as also deeply discriminatory. (Among its many problems, it bars localities from passing antidiscrimination laws until December 2020.)

The story of HB2, however, is just one nasty installment in an ongoing antidemocratic saga.

Late last month, the nonpartisan National League of Cities published an alarming report about the increasing prevalence of preemption efforts in this country. It reveals that 25 states currently limit or prohibit the ability of local officials to raise the minimum wage, 19 stymie city action on paid leave, 17 limit the extent of municipal broadband, five prevent localities from taxing or banning single-use plastic bags, and three, including North Carolina and Arkansas, have cracked down on local antidiscrimination ordinances.

“State preemption,” the report declares on its very first page, “is a threat to local control and city success.”

Indeed, preemption is slowly strangling local democratic experimentation on a grand scale. In 2016 alone, at least 36 states across the country introduced new bills meant to suppress municipal policy-making, according to the Preemption Watch initiative. And as the practice spreads—as preemption seeks to shackle cities, impair progressive policy-making, and suppress urban resistance to the Trump agenda—it is evolving newly aggressive and punitive forms.

Look, for instance, to Pennsylvania, where conservative lawmakers are presently promoting HB 861, a breathtakingly broad proposal that would prevent local governments from regulating, in any way, wages, benefits, hiring and firing practices, workplace standards, and paid-leave policies.

Look to Arizona, where the state legislature is considering a bill, HB 2086, that not only bans cities from issuing identification cards to their residents—a measure that some cities have adopted as a way to provide undocumented immigrants with a valid form of ID—but also enables the state to withhold funding from any municipality that violates the proposed law.

Above all look to Florida, and the trials of Tallahassee Mayor Andrew Gillum. In 2011, the state legislature there passed a law that imposes fines on counties and municipalities that regulate guns in any way or form. The law further enables outside parties to bring lawsuits against local officials in a personal capacity if their city does not abide by the state’s mandates. It also empowers the Florida governor to play king, and remove any official believed to be willfully violating the law’s intent.

Gillum, whose city has long-standing regulations on the books that prohibit people from shooting guns in public parks, soon experienced preemption’s punishment. In 2014, the Second Amendment Foundation and Florida Carry sued the mayor because, Tallahassee had not officially rescinded its gunfire ordinances, despite their being effectively null and void. Gillum has been tied up in legal proceedings ever since. (Though he and the city scored a partial victory in February in state appellate court, their opponents have until early April to challenge the ruling.)

“For over two years I have had this cloud hanging over me as we fight to push back on these interests, who again were able to sue me as a result of the 2011 Florida preemption law,” says Gillum, who is preparing to run for governor in 2018. “The law allows me to be personally sued. It means I can be fined up to $5,000 and be responsible for reimbursing attorneys’ fees up to $100,000.” What’s worse, the preemption law dictates that the mayor cannot use public funds to defend himself from the suits.

As Gillum faces down the gun lobby’s lawyers and risks financial hardship, he is searching for new ways to counter preemption of all kinds. In January, he launched the Campaign to Defend Local Solutions to organize a united front of city councils, mayors, and grassroots groups to fight preemption. The organization counts among its partners local and state officials in Tennessee, Texas, Michigan, Arizona, Arkansas, Florida, California, and other states.

Gillum says the campaign’s crucial first step is to make people aware of what they are up against. Though preemption is a nonpartisan phenomenon, its recent vogue is a result of right-wing dominance at the state level coupled with the immense influence of organized commercial interests.

“What we are seeing,” he says, “is the corporatization of democratic practice.”

The American Legislative Exchange Council (ALEC), in particular, has played a prominent role in pushing preemption bills across the country. Funded by a klatch of far-right billionaires, multinational corporations, and industry trade groups, ALEC brings corporate lobbyists and elected state officials together to craft model legislation for use by conservative lawmakers. Preemption is one of the group’s favorite strategic tools.

Since 2011, sick-leave preemption laws hewing closely to ALEC-backed policies have been adopted in more than 10 Republican-dominated states, including Florida, Michigan, Mississippi, and Missouri. ALEC’s proposals on minimum-wage preemption are also popular with regressive governments. Most recently, in February 2016, Alabama passed a minimum-wage preemption law that was eerily similar to one of the organization’s model bills.

“This is legislative capture,” says Lisa Graves, the executive director of the Center for Media and Democracy, which has long tracked the influence of ALEC. “Very special interests who oppose progressive policies are using state legislatures to advance their interests in ways that are deeply antidemocratic.”

Countering these antidemocratic and anti-local corporate forces will require pressure from a mobilized public.

“Grassroots movement-building,” says Michael Bare, a program manager of Preemption Watch, “has been shown to be the most effective way to fight preemption.”

He points in particular to the example of California’s tobacco-control movement. In 1994, Big Tobacco spent at least $18 million trying to pass Proposition 188, a ballot initiative that would have effectively abolished strict local smoking regulations in towns and cities across the state. A grassroots coalition of public-health groups fought the initiative from the outset with a simple strategy: Using advertisements of all sorts, they sought to inform voters that low-credibility corporate interests like cigarette-maker Philip Morris were behind the proposition. This information, the organizers believed, would turn the public against the initiative.

Countering anti-democratic and anti-local corporate forces will require pressure from a mobilized public.

The plan prevailed. Proposition 188 went down in defeat, and this defeat offers a lesson for progressive opponents of preemption today: At all times and everywhere, unmask the political meddling of corporate interests. The public will repudiate it.

The courts will also be key in resisting the growing potency of preemption. In recent months, two cities—Coral Gables, Florida and Cleveland, Ohio—have had success in this regard. Coral Gables managed to convince a Miami-Dade circuit judge that the legislature’s preemption of the city’s Styrofoam ban violated the state constitution. Likewise, Cleveland successfully obtained a permanent injunction against an Ohio law nullifying the city’s local-hire ordinance, which mandates that residents get a certain percentage of the jobs that Cleveland’s public projects provide.

The people of Fayetteville are hoping for a similar victory. In February, the Arkansas Supreme Court sided with the Attorney General and ruled that state preemption law indeed nullifies the city’s nondiscrimination ordinance. It was a setback, but not a complete defeat. The case was remanded to a lower court, where Fayetteville’s city attorney is now arguing that Act 137 violates the equal-protection clause of the United States Constitution.

“Our strongest case is the equal-protection argument,” says city attorney Kit Williams. For the legislature “to say, yes, we will let you get discriminated against just because of who you are, that just isn’t right. It’s discrimination of the worst kind.”

Kyle Smith, meanwhile, says he has not relinquished hope.

The ordinance, he says, “is about defending our community identity.” And, at least for now, while the city fights in court, it remains on the books and enforceable, preemption be damned.