Journalists take part in a protest against the killing of Palestinian journalist Yasser Murtaja by Israeli forces at the Israel-Gaza border, in the southern Gaza Strip, April 8, 2018. (Reuters / Ibraheem Abu Mustafa)

Gaza City—Both Yasser Murtaja and Ahmed Abu Hussein were wearing vests marked PRESS when the Israeli snipers shot them dead. Both were killed while covering current protests at the Gaza border. Thirty-year-old Murtaja, shot on April 6, died the next day. Twenty-four-year-old Hussein, shot on April 13 and later transferred to an Israeli hospital, died Wednesday.

Murtaja’s charismatic smile and professional credentials—he’d worked as a cameraman with the BBC, Ai Wei Wei and Al Jazeera, among others, and had just been commissioned by the Norwegian Refugee Council—kept his death in the headlines for days after. “I wish I could take this picture from the air,” he had posted on Facebook just last month. “I live in Gaza. I have never travelled.” Five other Palestinian journalists were also injured by live fire the day Murtaja died, according to the Palestinian Journalists’ Syndicate, which accused Israel of targeting the press in violation of international law.

Journalists generally cringe at being the story. But Murtaja’s death brought relatively rare attention to the plight of Palestinian journalists in war-weary Gaza—besieged by Israel’s and Egypt’s blockade, ruled by the repressive Hamas, and, amid Palestinian infighting, dire electricity shortages, and international-aid cuts, facing humanitarian and economic collapse. In Gaza, Palestinian journalists fear being targeted by Israel in war or clashes—like any other Gazan—all while living locked in a highly politicized local media environment in which, as one journalist who requested anonymity in order to speak without repercussion put it, “You can’t hold the responsible responsible.” Journalists interviewed said that, besieged from all sides, there are too many stories left untold.

Ain Media, a production company that Murtaja co-founded in 2012, had seemed to defy the odds and make it work. Now located in one of Gaza City’s nicer buildings, Ain Media was the first to use hard-to-acquire drones and shot widely shared bird’s-eye images of the destruction of the Shejaiya neighborhood of Gaza City after the 2014 Israeli assault. They were young guys with no formal media training (Murtaja studied accounting) but a passion for film and photography and a desire to do something new in Gaza, explained Rushdi Sarraj, a co-founder and childhood friend of Murtaja’s.

It may also have helped that the Murtajas are a large family that’s well-connected, including with the Hamas government, which has ruled Gaza after winning elections in 2006 and in 2007 ousting the Western-backed Palestinian Authority in a civil war. After Murtaja was killed, Israeli Defense Minister Avigdor Lieberman, without presenting evidence, implied that he had a drone that day and accused him of being a member of Hamas’s military wing; his colleagues as well as those at the scene of his death deny both claims. In 2015 Murtaja was arrested and beaten by Hamas authorities for filming in an area without permission, a scenario familiar to many journalists in Gaza. Last year, the US State Department vetted Murtaja as part of its standard procedure for awarding aid grants and found no ties to militant organizations or activities.

“We’re in a big prison. We can’t study outside or go outside or mix with other cultures or foreign journalists outside. We are completely isolated.” —Rushdi Sarraj, Ain Media

“We Palestinian journalists have many difficulties,” explained Sarraj of the ways in which Gazan journalists are squeezed. “Firstly, we’re in a big prison. We can’t study outside or go outside or mix with other cultures or foreign journalists outside. We are completely isolated.”

“Second thing, we have big difficulties with the equipment that we film with,” said Sarraj. “The majority of it is forbidden to enter [from Israel]. Therefore we are blocked from doing many kinds of work. Also, we face difficulties with the danger in our lives.” In wars and clashes, he said, “the journalist is always targeted.”

“Freedom of speech, to be frank, is limited,” continued Sarraj. “We are always restricted, whether from the [Hamas] government in Gaza or the [Palestinian Authority] government in Ramallah, or even from the Israeli occupation. When we go to interviews with people, they are afraid from these three sides. Maybe a Palestinian Authority employee is afraid of losing his salary or a Gazan is afraid to mention a person [from the government], as he might face difficulties from the government, or if he has a permit and wants to travel from the Erez crossing he’s not interested in saying anything about Israel.” 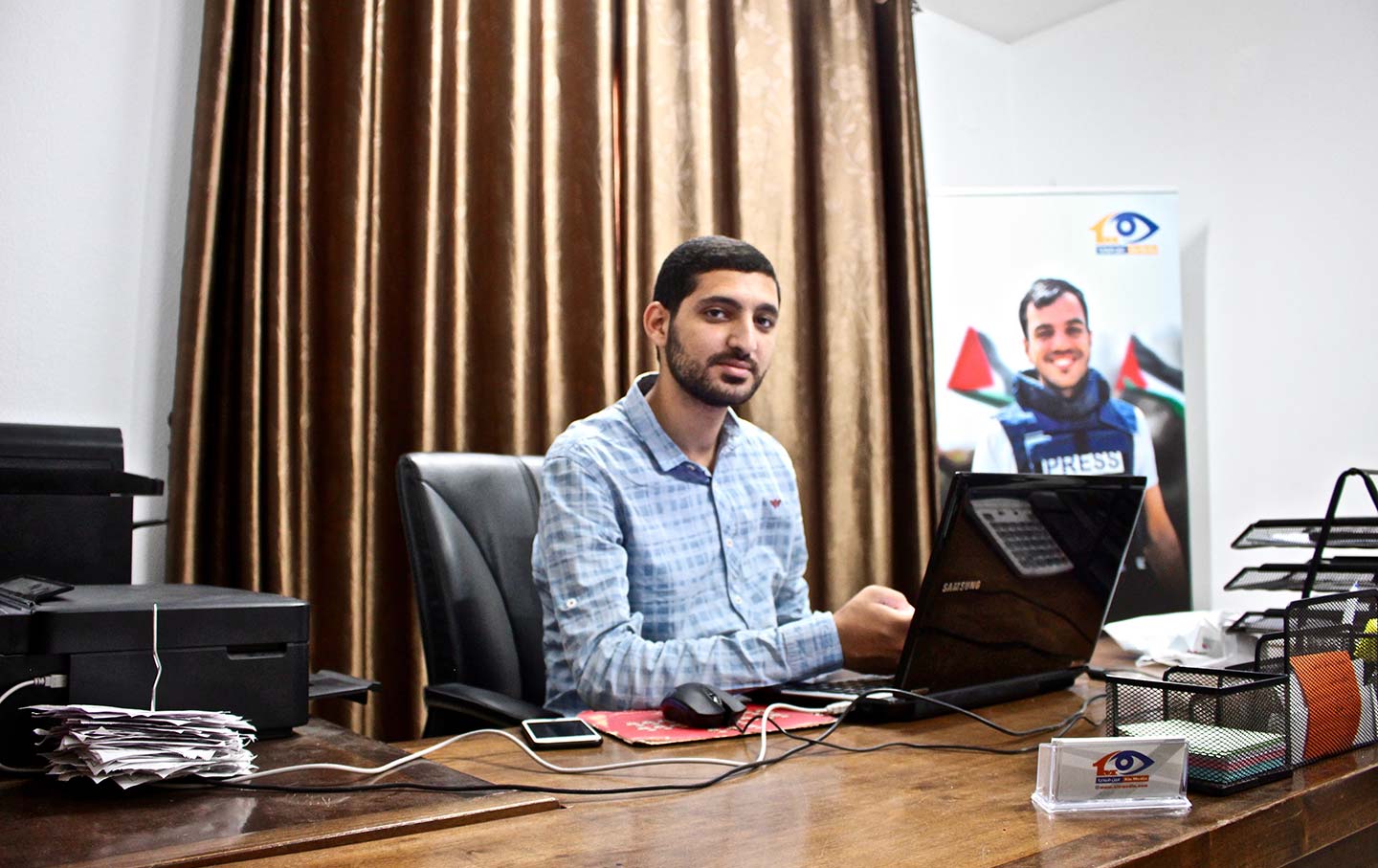 Rushdi Sarraj in the Ain Media office, with a poster of Ain Media co-founder Yasser Murtaja, killed by an Israeli sniper on April 7. (Image courtesy of Hamza Saftawi)

In this space, foreign journalists, with the privilege of coming and going as an outsider and writing in a different language, can often publish the story or receive the access that Palestinian journalists in Gaza can’t. Still, the work of the international media remains dependent on local journalists and translators, who (for fees often higher than they would make writing their own stories) help fix interviews and share their connections.

“Our work as journalists and media workers grows with crises,” said Sarraj. “When there are crises, the world focuses on us and requests material.”

“We’ve started on this road and we know the dangers on it, but we have a message we must communicate.” —Rushdi Sarraj

That’s why, Sarraj said, he and his colleagues will keep working nonetheless. “We’ve started on this road and we know the dangers on it, but we have a message we must communicate,” he said.

Murtaja and Hussein are among 38 Palestinians killed and some 1,500 injured so far at weekly protests set to culminate on May 15 to mark 70 years since the Palestinian Nakba (“catastrophe”), which is how Palestinians refer to the founding of Israel. Called the Great March of Return, organizers say it’s a nonviolent message to the world that Palestinians are still struggling for their right to return to their land while imprisoned in Gaza. Israel controls most of the borders with Gaza and severely limits who and what comes in and out. Israeli authorities have dismissed the protests as a front for Hamas, which has been designated by some Western governments as a terrorist group, and warned that protesters who come too close to the border or use violence will be shot.

No one knows what will happen May 15. Hamas, which is financially squeezed, politically isolated, and taxing Gazans to their last cent, and Fatah, which dominates the West Bank–based PA and is trying to force Hamas out by cutting electricity and salaries to Gaza, both stand to benefit from the protests, which direct pressure away from them and toward Israel.

Inside Gaza, where freedom of assembly is limited, people are also generally desperate and exhausted from a decade of siege and three wars and now little electricity, few jobs, and no way out. They see these protests as their way to get the world to pay attention and just to do something, anything. In recent months, the already dire situation has been worsened by US cuts to the United Nations Relief and Works Agency, which has provided food aid to 1.3 million of Gaza’s 1.9 million people. In addition, the PA has stopped paying salaries to its workers in Gaza, who until now were among the few people left with any income to circulate.

Local journalists, like 33-year-old Osama Khalout, who works part time for the Fatah-aligned Donia Al-Watan, have been covering the demonstrations without any protective gear to shield them from the live ammunition and tear gas fired by Israeli soldiers into Gaza’s buffer zone. Even if Khalout had the money to afford an expensive flak jacket and gas mask, he has no way to get one into Gaza, as Israel limits their entry. Like most local media, his paper has no independent source of money and he’s poorly paid, with few venues for professional development or protections. Khalout has been posting his photos to Facebook, as he believes social media is the best outlet for him to share the Gaza he sees. As with so many in Gaza, it can be hard for him to stay motivated and not succumb to depression.

“We are in a bad reality imposed on us and from within us,” he said. “I live the same bad situation as the people.”

Still, Khalout intersperses his reporting stories with typically Gazan sharp jokes, poking fun at the image of himself dodging bullets from Israeli soldiers at the protests.

Twenty-two-year-old Hind Khoudary, one of the few Palestinian female journalists in Gaza, works as a freelance reporter and translator and has been covering the protests for Kuwait’s national channel and RT International in English. She started freelancing for the latter just recently, and noted that RT International has been more interested in covering the protests than Arab media.

Khoudary never studied journalism formally, so she’s learning as she goes. She started writing in 2015 through a volunteer project called We Are Not Numbers, which pairs writers from Gaza with mentors in other countries.

But while covering the protests last week, Khoudary fainted after Israeli soldiers fired several rounds of tear gas right where she was working.

“It’s not about working for someone or not; everyone is targeted,” she said, noting that she was lucky to have received proper protective gear from her freelance employer, though they have not provided insurance. “Even if you’re a journalist, a photographer, a videoman, a cameraman. All of us.… As long as you are Palestinian and there, you are targeted.”

“Everyone is trying to adopt the march, all the political parties,” she added. “But what I feel is that everyone is going because everyone is suffering.”

In this environment, journalists can’t freely or easily report on Hamas and internal politics, can’t access equipment or training or travel outside, and are constantly under threat of war with Israel while grappling with widespread poverty, unemployment, and isolation. Murtaja’s dream was everyone’s, too.

“Journalists in Gaza don’t have much freedom,” said Ataf Abu Saif, an award-winning writer from Gaza and one of the Great March of Return’s spokespeople. “So you have skilled journalists, but they are unable to exchange expertise and information with international journalists. It’s a pity, you know. Like if I’m a young journalist and I dream I could report from other nations, if you live in Gaza you don’t have this dream. Your ultimate dream is to stay in Gaza, to stay alive. Like you as an American journalist, you travel and report. No Palestinian journalist can have your dream.”