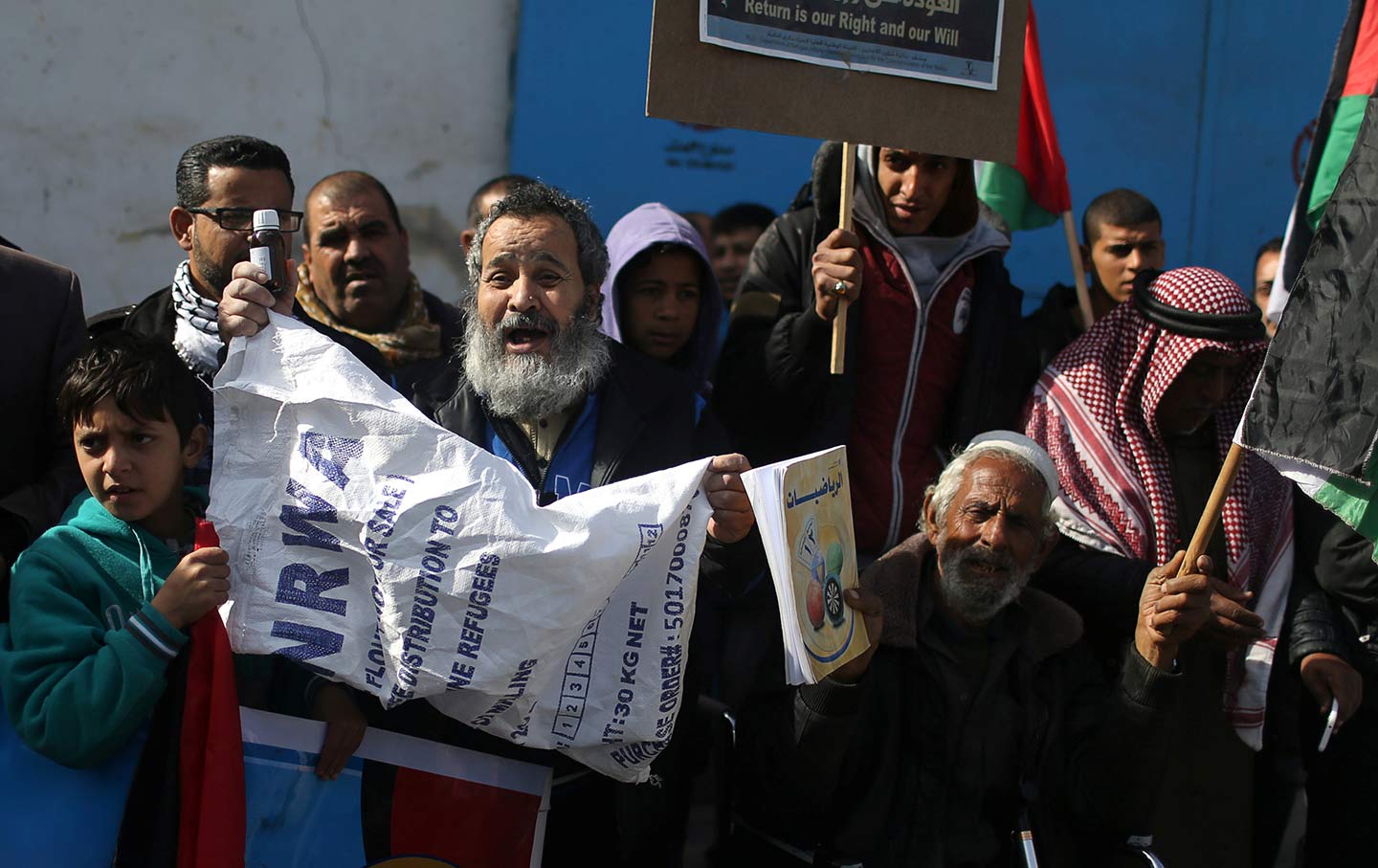 Palestinians protest against the aid cut outside the UNRWA office in Rafah in the Gaza Strip, January 21, 2018. (Reuters / Ibraheem Abu Mustafa)

A potential calamity is looming in the Middle East, a calamity of the United States’ making that is inimical to our interests and investments. I am referring to Donald Trump’s decision to slash a promised installment of funding for the United Nations Relief and Works Agency (UNRWA)—the international agency responsible for the welfare of 5.6 million Palestinian refugees in Jordan, Lebanon, Syria, Gaza, and the West Bank—while effectively freezing additional funding for the foreseeable future.

The news dropped on January 16, when the State Department sent a letter to UNRWA announcing that it would be withholding $65 million of a planned $125 million payment to the agency. Two days later, the State Department announced that it would also be halting a $45 million payment it had pledged to UNRWA in December, in that case for food aid for the West Bank and Gaza. While a State Department spokesperson insisted that the cuts were “not aimed at punishing anyone,” punishment certainly seemed to be on Trump’s mind when he tweeted two weeks earlier, “with the Palestinians no longer willing to talk peace, why should we make any of these massive future payments to them?” The implication seemed clear: The Trump administration would slash aid to Palestinians as long as the Palestinian Authority (PA) refused to engage in US-backed negotiations with Israel.

It’s worth pausing for a moment to consider that the PA’s refusal to engage in negotiations stems entirely from Trump’s own actions—specifically, his formal recognition of Jerusalem as Israel’s capital; this move not only dismissed Palestinian claims to the city but effectively predetermined the outcome of future negotiations. Moreover, it should be noted that the entity through which the Trump administration is now exacting its punishment is a humanitarian agency, not a political one, and it has never been involved in any peace negotiations between Israel and the Palestinians. Yet, despite its vital role, the Trump administration has opted to slash UNRWA’s resources, sparking what agency spokesperson Christopher Gunness described as “the most serious financial crisis in UNRWA’s 70-year history.”

This isn’t hyperbole. The United States contributes almost 30 percent of UNRWA’s annual budget, or $364 million a year. The loss of nearly a third of its budget, should the Trump administration continue to withhold payments, would force the agency to significantly scale back or suspend its services in many vital areas, or to move swiftly to persuade other donors to fill the gap. Even a partial defunding of UNRWA by the United States would have severe consequences.

As a start, UNRWA’s nearly 700 schools would probably have to close, depriving approximately 500,000 children across the Middle East of an education at a time when the stability that a moderate education provides is at a premium. The agency would also have to significantly decrease or even eliminate the 9 million health consultations that UNRWA doctors provide in 143 health centers each year. Moreover, many, if not most, of UNRWA’s 30,000 employees—most refugees themselves and supporting at least 150,000 people, including teachers, doctors, nurses, and social workers—would likely lose their jobs in the short term, or even permanently. And 1.7 million refugees who are already food insecure would have their food and cash assistance reduced or wholly terminated.

These are just some of the losses that could result from the reduction or termination of US assistance. Most, however, agree, that education will be the first service to go. The reason is that UNRWA is a human-development organization that allocates the majority of its budget to education followed by health and other social services. Unlike other UN agencies that may face draconian budget cuts, such as the World Food Program, which can proportionately reduce the amount of food it distributes (which is itself tragic), UNRWA cannot provide a third less education to its students. It would have to end the provision of education in order to preserve other life-giving services, principally in health. It was nearly forced to do this during a financial crisis in 2015, and it will likely have to do so now.

Such forced prioritization would weaken one of the region’s most viable institutions and sources of stability at a moment of gross regional insecurity and increasing disarray. In an era when the United States and its allies are investing hundreds of millions of dollars in “stabilization” programs that support youth, women, marginalized groups, education, and employment in this volatile region, it beggars belief that we would suggest defunding a proven and cost-effective partner in this work.

Palestinians would suffer the gravest and most immediate consequences of this instability, but they would hardly be the only ones; the effects would also be felt by some of the United States’ most important allies in the region. Israel, for one, as the occupying power, could come under increasing pressure to fill the resulting vacuum created by the suspension of UNRWA services for over 2 million refugees in the West Bank and Gaza. Furthermore, it is difficult to see how a destabilized and inflamed Gaza benefits Israel or neighboring Egypt. I personally remember discussions with UNRWA employees in Gaza in May 2014 over a simple change in the time of UNWRA food distributions and the palpable anxiety this created among refugees who, given their precarious life circumstances, were unable to deal with any uncertainty, no matter how minor or mundane. Imagine what a large-scale termination of services, educational and otherwise, will mean: throwing children and youth out on the streets and sapping the human capital that is the principal hope of the region.

Similarly, Jordan, which is home to the second-highest concentration of refugees in the world (including a recent influx of refugees from war-torn Syria), would, potentially, have to provide a variety of services to Palestinian refugees who are now assisted by UNRWA. Among these services: fulfilling the basic education requirements of an additional 120,000 children. This is a weight the kingdom cannot bear as it tries to balance the needs and perceptions of indigenous Jordanians and its enormous refugee population. In fact, for political and economic reasons, the Jordanian government has long been adamant that UNRWA not cut any service or support.

Perhaps the country in the most precarious position is Lebanon, which has recently become host to over 1 million registered Syrian refugees representing as much as a quarter of Lebanon’s resident population, the highest per capita concentration of refugees globally, according to the European Commission. To be forced to provide for the several hundred thousand Palestinian refugees already living in camps within its borders would deepen Lebanon’s economic shock, possibly bringing it to a breaking point.

Meanwhile, in Syria, the loss of UNRWA services would mean the abandonment, in effect, of over half a million desperate men, women, and children in a war zone with few, if any, viable options.

All of these threats should be enough to convince even the most hardheaded observer of the error of the Trump administration’s decision to slash UNRWA funding. But defunding the agency carries with it another danger. The Palestinian plight has long been emblematic of the disregard and callousness of the West. By defunding UNRWA and further impoverishing Palestinian refugees, the United States is feeding the narrative of persecution that extremist groups in the region thrive on. How is this in the interest of the United States or its regional allies, particularly Israel?