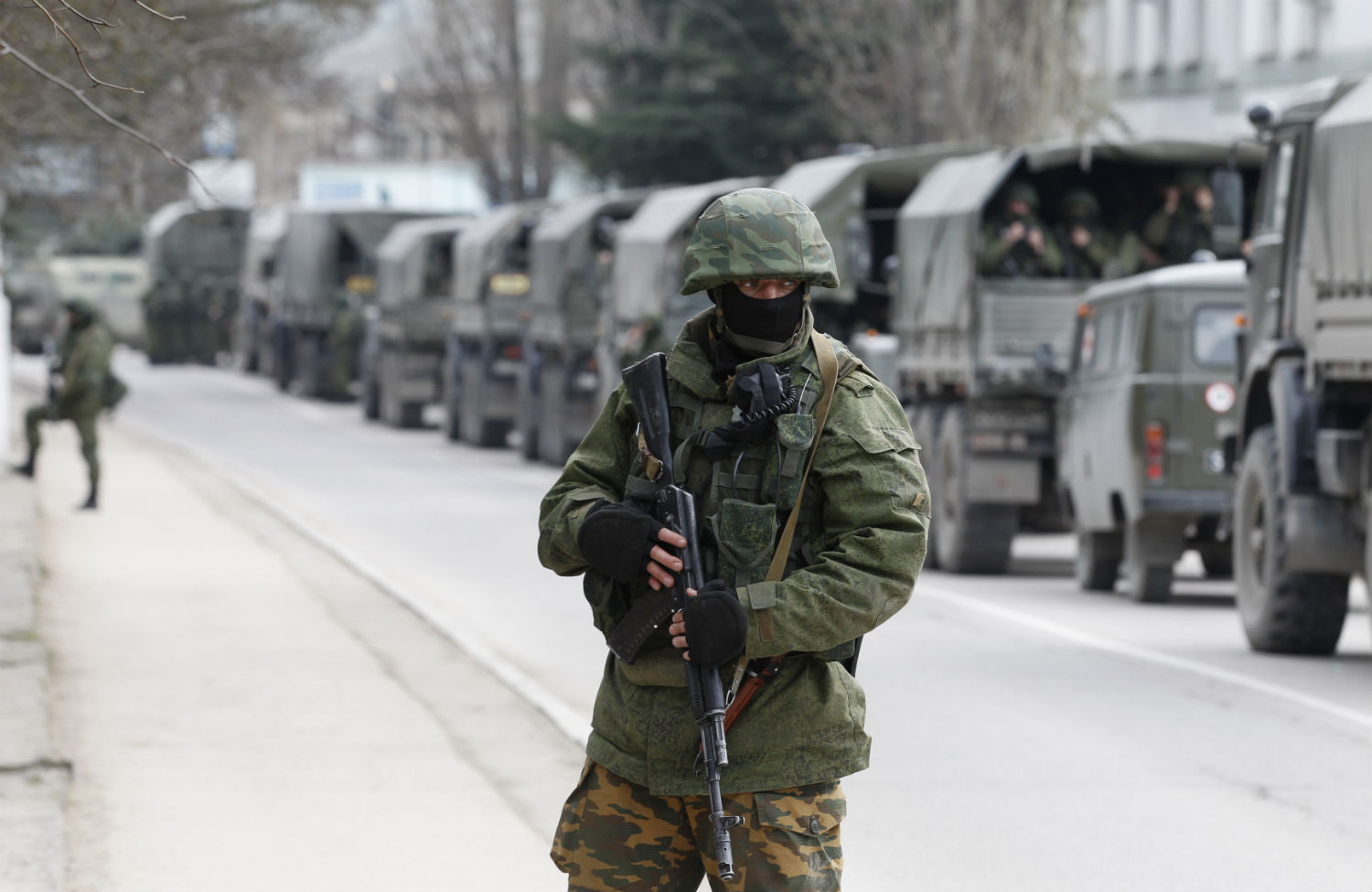 The escalating crisis in Ukraine has set off reckless missile-rattling in this country. As Harvard’s Stephen Walt tweeted on March 2: “Public discourse on #Ukraine situation hitting new hghts in hyperbole. (‘New Cold War, WW III,’ etc.) Rhetorical overkill not helpful.” He may have been thinking of neocon Charles Krauthammer, who in his Washington Post column called for the United States to ante up $15 billion for Ukraine and send a naval flotilla to the Black Sea. The same paper headlined that the crisis “tests Obama’s focus on diplomacy over military force,” quoting Andrew Kuchins of the Center for Strategic and International Studies decrying President Obama’s “taking the stick option off the table.”

The Obama administration has responded to the crisis by flexing its own rhetorical muscles. When Russian President Vladimir Putin ignored Obama’s warning that “there will be costs” if Russia sent troops into Crimea, Secretary of State John Kerry denounced the “brazen act of aggression,” vowing that “Russia is going to lose, the Russian people are going to lose” and suggesting “asset freezes…isolation with respect to trade and investment,” while promising “economic assistance of the major sort” for whatever government emerges in Kiev.

European governments were far more measured, with many condemning Russia’s Crimean invasion but most of them clearly reluctant to impose economic sanctions. Their economic ties to Russia are much closer than America’s, of course, but they also understand that diplomacy will be more effective. Among the cooler heads at home was Jack Matlock, ambassador to the Soviet Union under Ronald Reagan, who described the administration’s warnings to Putin as “ill-advised” and argued that “whatever slim hope that Moscow might avoid overt military intervention in Ukraine disappeared when Obama in effect threw down a gauntlet and challenged him. This was not just a mistake of political judgment—it was a failure to understand human psychology—unless, of course, he actually wanted a Russian intervention, which is hard for me to believe.”

We should take a deep breath—and a sober look—before committing treasure and prestige to a still-unsettled new leadership in a country on Russia’s border, one that has had a fragile independent existence for barely two decades. Some history would also serve us well if we’re to understand fast-moving developments. We are reaping the bitter fruit of a deeply flawed post–Cold War settlement that looks more like Versailles than Bretton Woods, a settlement inflamed by the shortsighted American decision to expand NATO eastward and pursue other policies aimed at isolating Russia and ignoring Russian interests.

Russia’s dispatch of military forces to Crimea is a clear violation of international law. Putin justifies the invasion as necessary to protect Russian citizens and allies, but this is a fig leaf. The Obama administration is right to condemn it, although much of the world will grimace at the irony of Secretary Kerry denouncing the invasion of a sovereign country even as the United States only now winds down its “war of choice” against Iraq, which is thousands of miles away from US borders. Crimea, of course, not only abuts Russia but houses its Black Sea Fleet, which, by treaty agreement between Ukraine and Russia, is set to remain there until at least 2042. Crimea historically was part of Russia until 1954, when Soviet leader Nikita Khrushchev transferred it to Ukraine in what many viewed as a gesture of good will.

Viktor Yanukovych was corrupt and unpopular, but he was the democratically elected president of Ukraine. He had been steering the country toward an association agreement with the European Union last fall when he reversed course after Russia offered $15 billion in financial aid to the all-but-bankrupt country. That led to the street demonstrations—spurred in part by the EU and the United States—that eventually sent Yanukovych packing.

Ukraine is deeply divided. As David Speedie, director of the US global engagement program at the Carnegie Council for Ethics in International Affairs, says, “In simple terms, half the people in Ukraine look to Russia and the other half look to the West.” As Nicolai Petro details in his March 3 report at TheNation.com, the new leaders in Kiev include right-wing ultranationalists who, in one of their first acts, repealed the 2012 law allowing Russian and other minority languages to be used locally. (That measure was reversed, but not before arousing deep mistrust and fear in semiautonomous Crimea and many other parts of eastern and southern Ukraine, which are populated largely by Russian speakers.) It is also worth noting that one party in the new government, holding key cabinet posts as well as central leadership positions in Parliament and law enforcement, is Svoboda, which the European Parliament has condemned for its “racist, anti-Semitic and xenophobic views.” Even further to the right is the neofascist Right Sector, which dominates the Maidan, or Independence Square, the heart of the rebellion, which has refused to disband and exerts significant influence over the new regime’s policies.

Yanukovych’s decision to postpone the EU’s association agreement was not irrational. It would have forced Ukraine to decide between Russia and the EU, flatly rejecting Putin’s offer of a tripartite arrangement that would allow the country to sustain its ties with Russia. Quite apart from Putin’s December offer of financial rescue, Ukraine is heavily dependent economically on Russia, which supplies and subsidizes much of its energy and is its largest trading partner. The EU and the United States, for all their bluster, are not about to replace that deep connection with Western aid and trade. Americans across the political spectrum will not be enthusiastic about sending billions to a country on the other side of the world while we are cutting back on vital investments at home. The EU, dominated by Germany, has inflicted brutal austerity on its own troubled members like Greece, Spain and Portugal. There’s every reason to think the EU, with or without the IMF, would impose an equally harsh regime on Ukraine as the price of financial aid. Any responsible government in Kiev should examine very carefully the level of support offered by these Western institutions, as well as the conditions attached to it.

In the Western media’s passion play, which largely disdains or distorts context and history, Putin is the designated villain. But Ukraine is central to Russian security, and Russia is far less concerned about its next-door neighbor’s economic relations with the EU (Russia itself is a major source of energy for the Europeans) than the further extension of NATO to its borders. A hostile Ukraine might displace Russian bases on the Black Sea, harbor the US fleet and provide a home to NATO bases. This isn’t an irrational fear. Despite promises by George H.W. Bush not to extend the West’s Cold War military alliance after Germany was united, eight former Warsaw Pact nations and three former Soviet republics have been incorporated into NATO, with the United States and NATO even setting up a military outpost in Georgia. And the EU association agreement, advertised as offering free trade, in fact had military clauses that called for integrating Ukraine into the EU military structure, including cooperation on “civilian and military crisis management operations” and “relevant exercises” concerning them. No one should be surprised that Putin reacted negatively to such a prospect. It’s difficult to imagine any American administration accepting a decision by Mexico to join a military alliance with Russia.

US foreign policy needs a strong dose of realism and common sense. It’s absurd to scold Obama for “taking the stick option off the table”: the unavoidable fact is that the United States has no stick in relation to Ukraine. Americans have no desire and no reason to go to war with Russia over Crimea, and the EU and the United States are not about to supplant Russia’s economic influence in Ukraine. Washington is not going to provide the aid, the trade or the subsidized energy Ukraine needs, and the EU—which is still mired in its own deep economic crisis—doesn’t have the means to offer Ukraine much beyond painful austerity. Its new government is not elected, not legitimate and not at all settled. The international community should be pushing hard for compromise before this fragile and bitterly divided country breaks apart.

Frustrated cold warriors filling armchairs in Washington’s outdated “strategic” think tanks will continue to howl at the moon, but US policy should be run by the sober. The president should work with the EU and Russia to preserve Ukraine’s territorial unity, support free elections and allow Ukraine to be part of both the EU and the Russian customs union, while pledging that NATO will not extend itself into Ukraine. It is time to reduce tensions, not draw red lines, flex rhetorical muscles and fan the flames of folly.