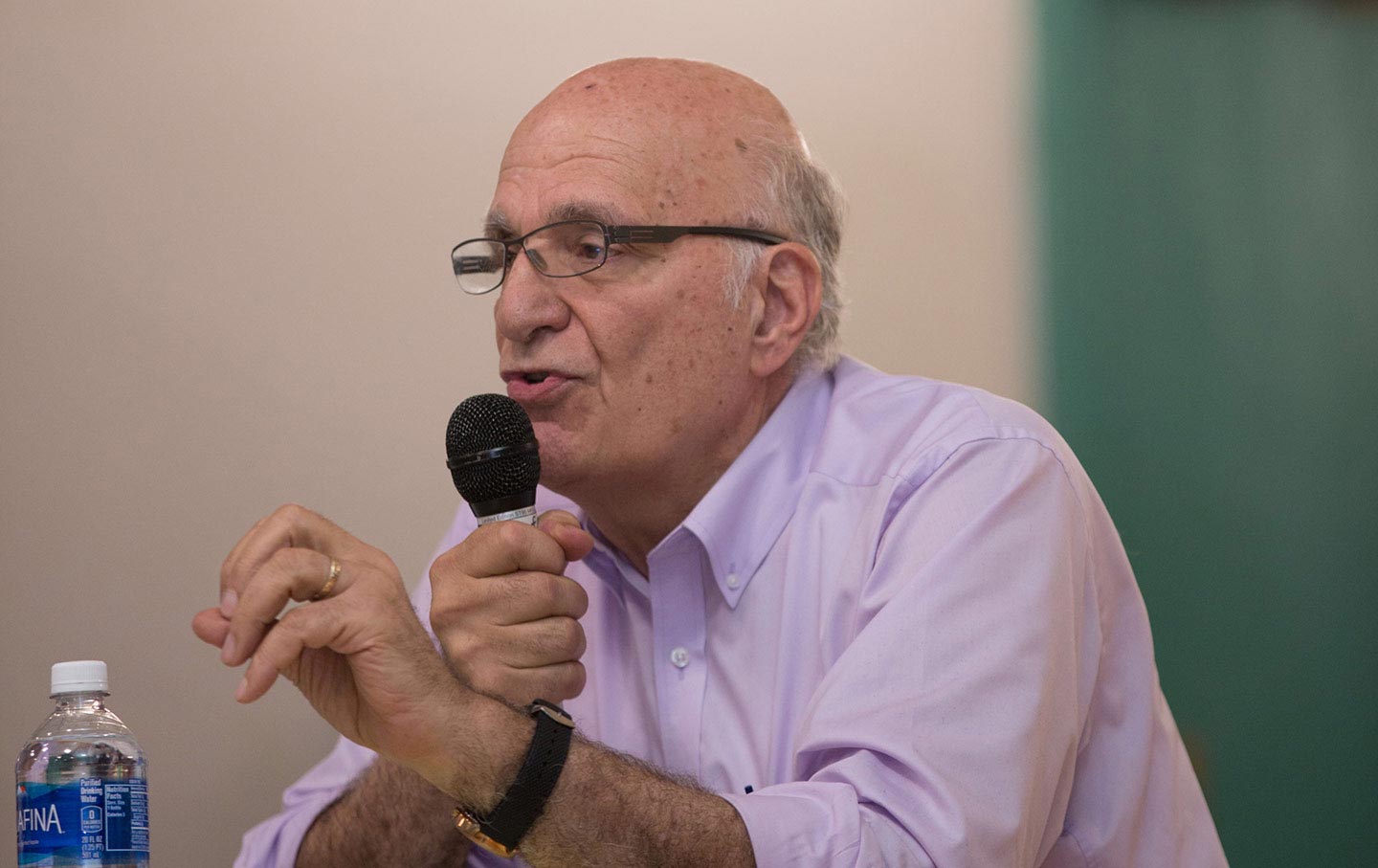 Robert Gangi, the progressive candidate for mayor of New York City who is challenging Bill de Blasio in the primary this year. (Justin Lanier / Gangi for Mayor)

Robert Gangi has been butting heads with New York’s political establishment for decades as he’s fought battle after battle over criminal-justice reform, first as the executive director of the Correctional Association of New York, and then as the director of the nonprofit he started in 2011, the Police Reform Organizing Project.

In those decades, he’s earned a reputation as someone not afraid to speak his mind and call out politicians, even ones theoretically on the same side, for what he sees as injustices. That’s why, he insists, he’s running a shoot-the-moon mayoral campaign against incumbent Bill de Blasio.

De Blasio is a national progressive darling and fundraising powerhouse, but he’s also been criticized by activists to his left who say his promise to end New York’s “tale of two cities” narrative has turned into empty rhetoric, as the city’s police department has continued to disproportionately arrest black and Latino New Yorkers for low-level offenses (a policy called “broken-windows policing”), and as inequality and housing prices have remained high throughout his tenure.

Gangi knows he has a micro-chance of winning. He only has about $5,000 on hand. His campaign is being run out of his rent-stabilized Upper West Side apartment, where he’s lived for 42 years. He only has three paid staff members and a few dozen volunteers (but only one is a family member—and a second cousin at that—Gangi was quick to point out). But regardless of the outcome, Gangi said his main mission is to show New Yorkers there’s an alternative to the kind of bland progressivism championed by de Blasio.

I reached Gangi over the phone at his home in mid-July. The interview that follows has been lightly edited for length and clarity.

Peter Moskowitz: Was there an “a-ha” moment when you realized you should run for mayor?

Robert Gangi: There was no one “a-ha” moment. I was director of the Police Reform Organizing Project, working with a number of other police-reform organizations. We thought we were doing very good work, putting out good documentation that exposed this starkly racially biased policing in New York City. We went from saying “in our opinion” to saying flatly, “NYPD arrest practices and other tactics are racist. It’s not a matter of opinion.” But we weren’t getting sufficient traction with the larger public and were certainly getting no meaningful response from the de Blasio administration.

The mainstream liberal response was to tweak at the edges of the problem but not take the steps that would represent meaningful change in terms of how cops interact with low-income communities of color and operate in those communities. Despite the drop in stop-and-frisk, and the increase in the kind of things that de Blasio brags about, like implicit bias training, policing in New York City on a daily basis under de Blasio continues to target low-income people of color.

So it occurred to me and to a number of other people that 2017 was going to be a mayoral race and there’s the opportunity, whether you’re successful or you’re using it as a platform to get attention to issues that might be hard otherwise to get attention to. The preface [sic] was to send a message, and even though we knew we’d be a long shot, we didn’t totally forgo the possibility that we could win. Even though de Blasio is polling well, we think his support doesn’t go very deep and that he’s vulnerable, particularly from a campaign that’s coming at him from his left.

PM: De Blasio ran on progressive promises. Whether he’s fulfilled them is another question, but how do you challenge someone who is already more progressive than most politicians in the country, and even in New York?

RG: God bless him, he makes it easy for us. He campaigned rhetorically as a progressive. He identifies himself as a progressive, he wraps the mantle around himself readily. A lot of the mainstream press have accepted that he is a progressive, and his actions and his policies and practices have not earned that identity. He supports broken-windows policing, which is almost by definition starkly racially biased policing. That’s obviously not the policy of a progressive. He has failed miserably to address the homeless crisis in the city. His latest proposal doesn’t even focus on providing more homes for the homeless, but building 90 new shelters—and their own projections are if they’re able to build the 90 new shelters, they will reduce the homeless population by 2,500 people in a five-year period, when there are over 60,000 homeless people in the city. His affordable-housing plan doesn’t hold up under scrutiny. When you take a close examination of it, you see that most of the units being built are by big real-estate companies, and profit-making companies do not provide many housing units that are actually affordable for the people living in the communities where the housing is being built.

Recently, he expressed the wish that begging was illegal, and he claimed that many people who engage in panhandling in New York City are gaming New Yorkers.

He’s wrong when it comes to the issues of [subway] fare evasion—it’s the second-most-common arrest by the NYPD, it’s clearly an arrest practice that criminalizes poverty. Most people don’t jump the turnstiles for the thrill of it, they jump the turnstiles because fare’s a financial burden. That’s a documented fact. De Blasio denies the fact of that. There are a number of areas where he is taking explicit steps that not only do not address social and racial inequities, they aggravate them. He is not a true progressive, he is not an honest progressive, so it’s relatively easy from that standpoint to run to the left of him. The bigger challenge is to get sufficient attention from the mainstream press to sufficiently educate the public that there are alternatives that are truly progressive, that are reasonable, can be instituted and would effectively address the problems that de Blasio is either ignoring or making worse.

But it’s a real effort to break through the media and their characterization that de Blasio is gliding through the election despite his lame policies, despite the wrong-headed moves he makes, like going off to Hamburg, Germany, just days after the police officer was killed; saying that he wishes begging was illegal; refusing to support reduced fare for low-income New Yorkers. Just issue after issue after issue.

Despite this failing to follow through on progressive policies, and despite a failure, or a lot of mistakes made as the leader of our city, it’s been a challenge to break through and to present ourselves as a competitive alternative to de Blasio.

PM: He’s still favored to win, though. So will your campaign have been worth it, if it’s not a winning campaign?

RG: Suppose I said, “Nah, you know, we’ve made a terrible mistake, I don’t know what the fuck I’m doing.” Of course I think it is worth it! Even the things that I mentioned, being on the Brian Lehrer show, being on Errol Lewis, being covered by The Nation. Last week, the Daily News published an op-ed of mine dismissing de Blasio’s cockamamie plan to close Rikers in 10 years and pledging that if I was elected mayor, we could close Rikers in one year. Coming out for decriminalizing marijuana possession, sex work, fare evasion, possession of a gravity knife—giving more heft and publicity to those kinds of positions even if we don’t carry the day by winning, educating more people [that] these are possible and reasonable alternatives is worth it. And we’re bringing attention to other issues, like class size. We think we can make the class size in every public school in New York City smaller.

PM: Let’s talk about the issue you’ve been working on for decades: criminal-justice reform. It seems like such a systemic issue. Is the only thing holding reform back the fact that you’re not mayor?

RG: Me being elected mayor is the solution to everything! [laughs] I don’t think there’s any policy as politicized as criminal justice, and politicians have traditionally been very wary of proposing any significant reform that could possibly either upset the major institutions that operate within the criminal justice system, particularly police departments and district attorneys, and the people who run the prisons and work in the prisons; and also the deep, deep fear that mainstream politicians have of being labeled soft on crime. That’s shifted over the years.

The political landscape has softened, but not sufficiently that any mainstream politician would propose fundamental reforms. The only real way to reform involves reducing the power, the resources, personnel of the police department, and no mainstream politician is going to propose that, even if they believe those steps were necessary. You can’t do it by adding body cameras, by applying more training, by doing something like de Blasio is doing and roll out these neighborhood policing programs. None of those steps are going to result in significant change in practices on the ground.

In New York City, all the officers who were directly involved in the death of Eric Garner still work for the police department, are still paid by New York taxpayer dollars. When I say that to a group, often there’s shock. And de Blasio didn’t have the political will to dismiss them.

PM: It’s one thing to talk about reform, it’s another to do it. Even de Blasio, who hasn’t been the biggest NYPD reform guy, had hundreds of cops turn their backs on him. So how do you change such an entrenched attitude? 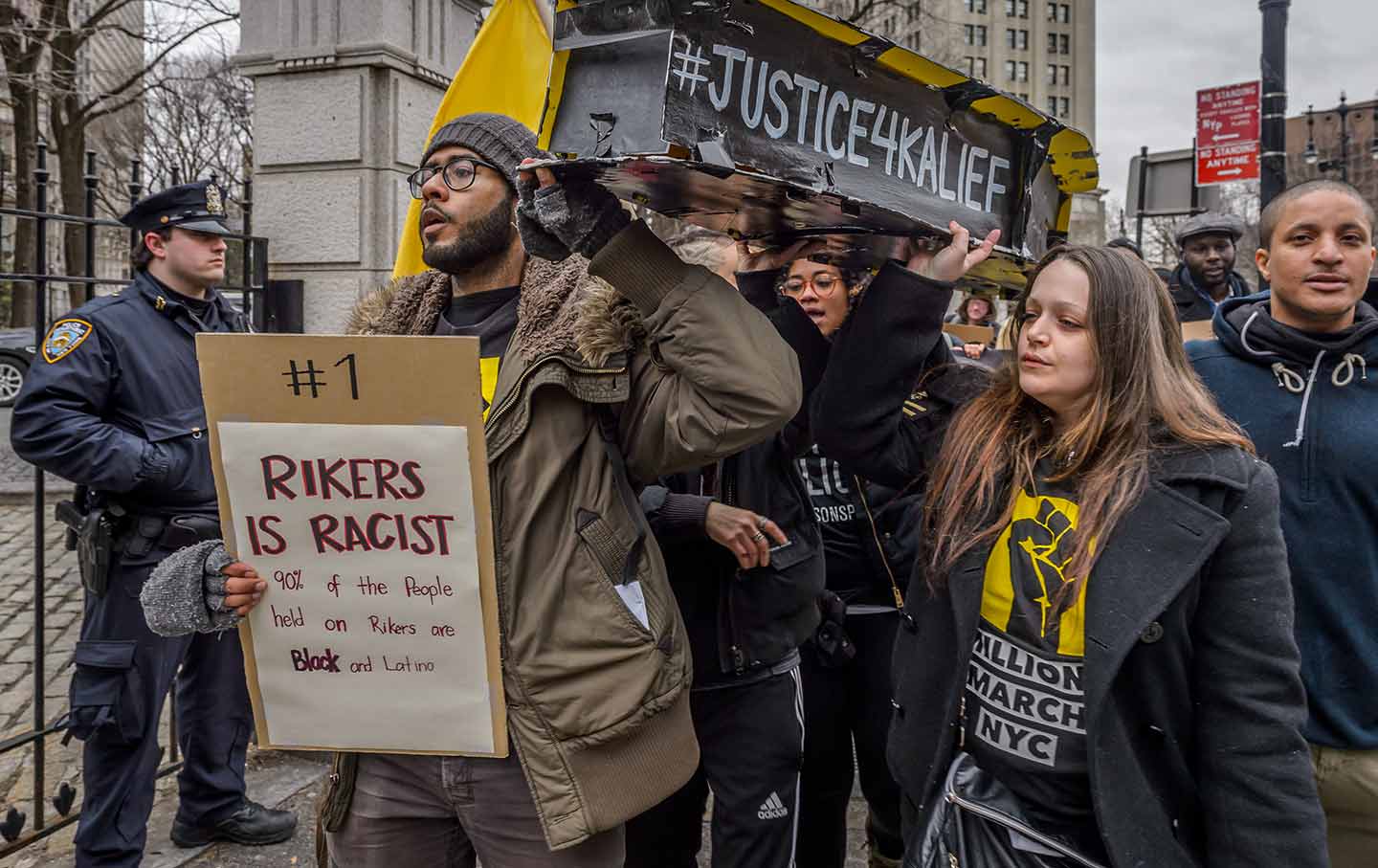 RG: We need to be very clear on what needs to happen if we want to end abuse of discriminatory policing—and to exercise leadership that makes a real effort to go at white America’s deep-seated belief that their police departments and criminal-justice systems actually are just and fair.

If I get elected running that kind of campaign, it means that I have a lot of political muscle and leverage behind me. And if the police officers bail or have a mutiny, I’d fire them. The mayor has the power to suspend without pay any police officer, which is what de Blasio should have done on day 1 after seeing that Eric Garner video, because that would send a message not only to the community that black lives do matter, but to police officers about what kind of conduct the leadership of the city would tolerate.

PM: So you kind of have a reputation for being, I don’t know, maybe it’s just being an old New Yorker, but yeah, being kind of a funny, out-there guy. Has that helped or hurt during the campaign?

RG: Well, most people would characterize me as someone who attempts to be funny—not who is funny. I mean, it’s probably my own visceral natural tendencies, but to see the comic aspects of life generally—of work generally—and specifically this campaign is just a healthy way of going about the work, without detracting from this deep awareness about how serious this kind of work is, and how we have the potential for affecting people’s lives, and for eliminating abuses and injustices.