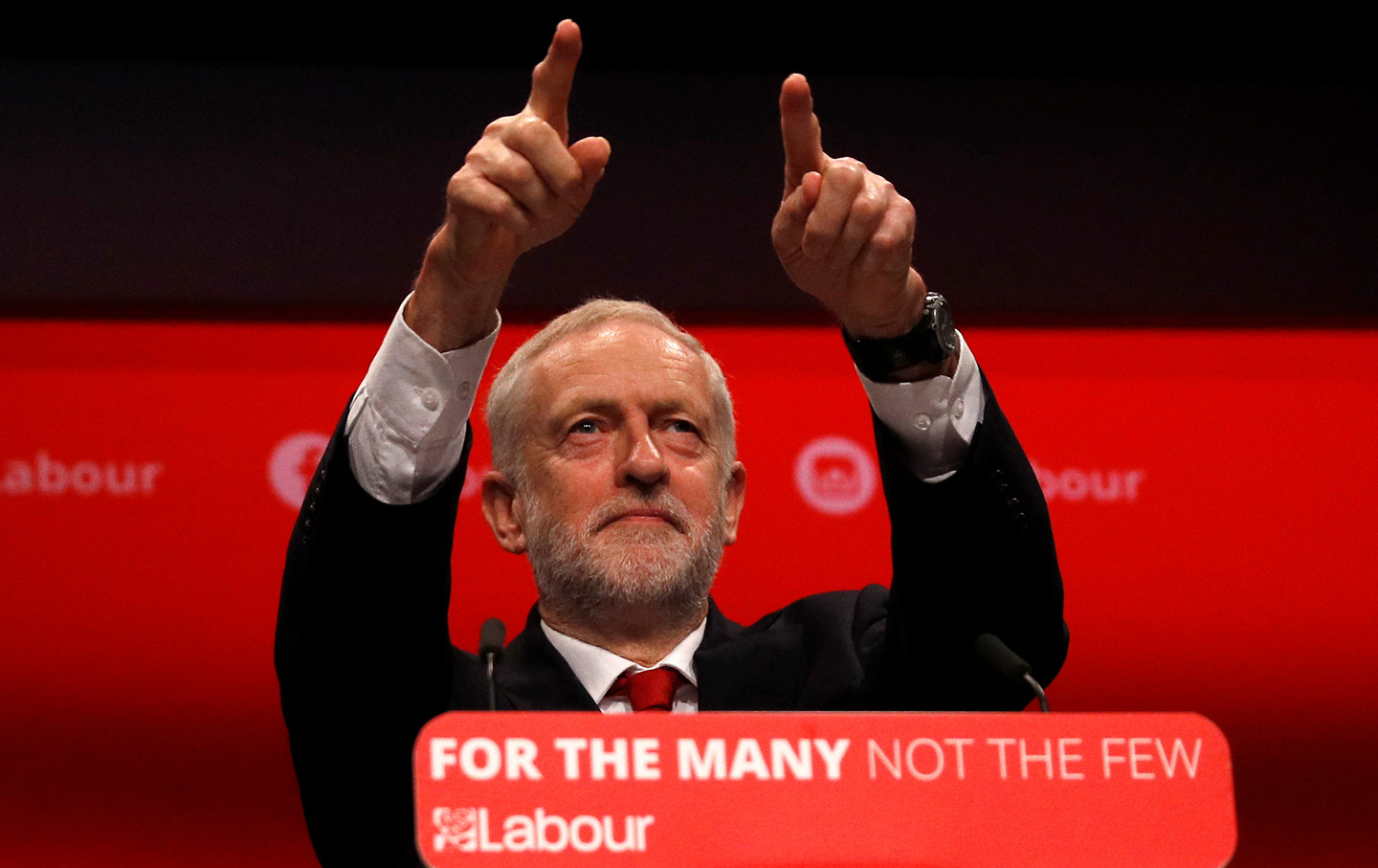 London—What a difference a year makes. When Jeremy Corbyn first offered himself as a potential leader following the Labour Party’s unexpected defeat in the 2015 general election, he had a hard time being taken seriously. Struggling even to find the minimum quota of Labour Members of Parliament to get nominated, Corbyn, a longtime fixture on the left of the party, surprised all of the pundits by winning the leadership election.

From the first day, however, his leadership was attacked and undermined by many of his own MPs—especially those with fond memories of Tony Blair’s three election victories. That implacable hostility, combined with Corbyn’s desultory performance in making the case for Britain to remain in the European Union during the 2016 Brexit referendum, gave rise to a formal leadership challenge at last year’s Labour Party Conference. Corbyn survived that, and a series of bruising internal battles over anti-Semitism (with the right-wing press taking every opportunity to fan the flames), only to face Prime Minister Theresa May’s surprise decision to call a snap election in June. In which, to the dismay of his critics, and at a time when the polls had the Conservatives ahead by as much as 25 points, Corbyn led Labour to its best result in years, dismantling May’s majority and putting many of the government’s most reactionary initiatives—from the return of fox hunting to a huge push towards selective education—on indefinite hold.

At this point, two things became dazzlingly clear. First, austerity wasn’t working. And second, everyone (including your faithful correspondent) had underestimated Jeremy Corbyn. During the campaign, it was Corbyn who came across as principled, compassionate, and—on the crucial question of Britain’s relations with the European Union—pragmatic, while May and her party increasingly appeared to be in the grip of an ideological obsession compounded of xenophobic fear and chauvinist economic fantasy.

Labour’s internal sniping continued, but thanks to the party’s much-better-than-expected election result and a huge surge in membership numbers—itself partly due to the rise of Momentum, the party’s internal left caucus, which came into existence to support Corbyn’s candidacy—the Labour leader is now firmly in control. As Corbyn pointed out in his speech this morning, with nearly 600,000 members, Labour is the largest political party in Western Europe. And if his speech is any indication, it is also among the most radical. 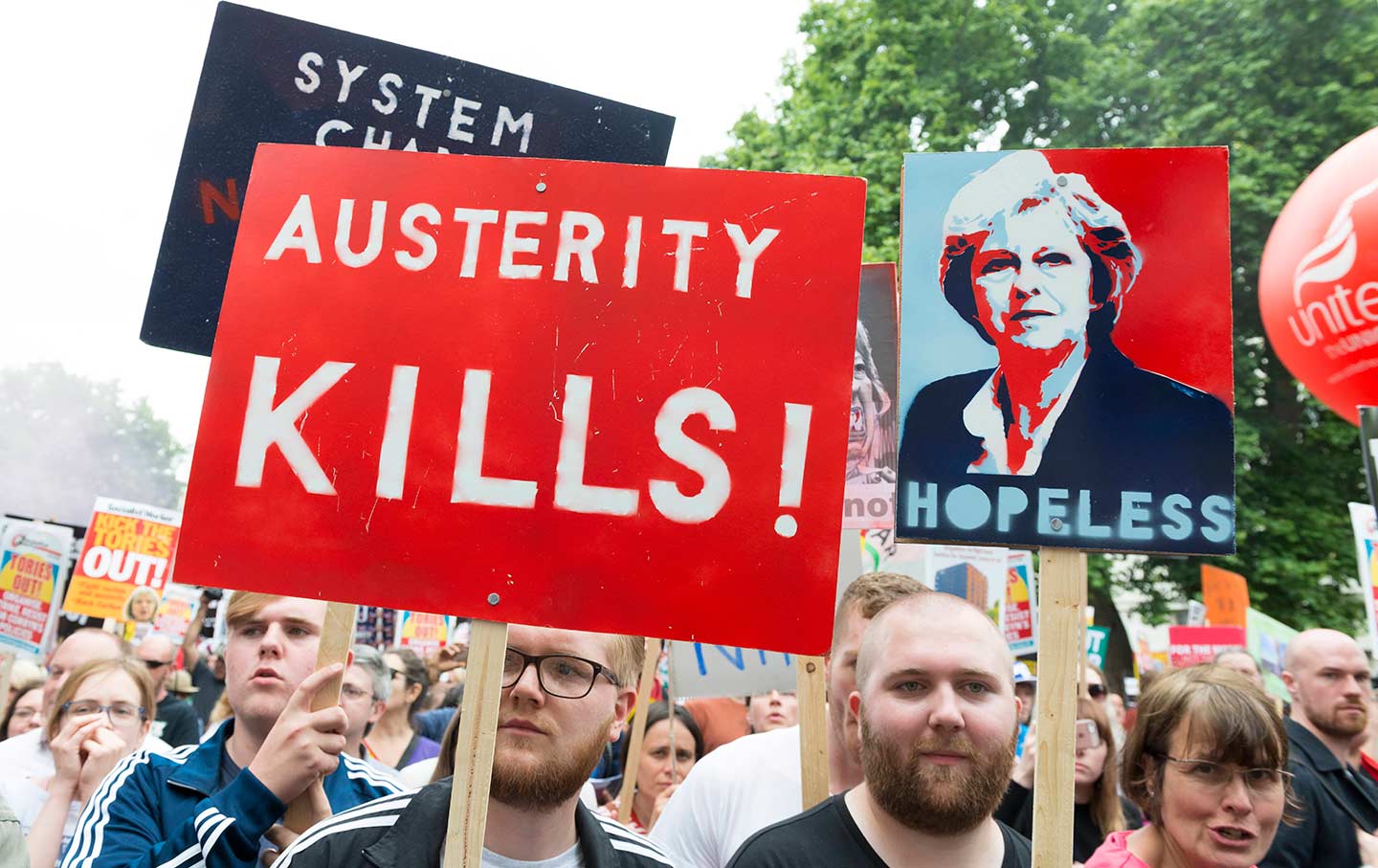 How to Lose Elections and Influence People

Gone were last year’s hesitant nods to socialist values and calls for marginal improvements. Long gone were his predecessor (and former Nation intern) Ed Miliband’s tortuous attempts to triangulate between populist attacks on predatory capitalism and an accommodation with “economic reality” designed to reassure voters that Labour could be trusted to balance the books. (Though Miliband himself was neither gone nor forgotten, displaying an unsuspected comic talent while emceeing a Momentum pub quiz the other night.) As for Tony Blair and Gordon Brown’s enthusiasm for hitching Labour’s wagon to the rise and flourishing of finance capital—all that was silently consigned to the dustbin of history.

Theresa May’s sordid £ 1 billion deal with the Democratic Unionist Party to hold on to office exploded whatever remained of her party’s claim to financial probity after Brexit put a hole in the British economy. As Corbyn put it, “this Tory Government does have one thing that we lack. They have tracked down the Magic Money Tree when it was needed to keep Theresa May in Downing Street.”

On Brexit—an issue that still divides Labour just as much as it does their opposition—Corbyn laid out a commonsense approach: “We accept and respect the referendum result, but respect for a democratic decision does not mean giving a green light to a reckless Tory Brexit agenda that would plunge Britain into a Trump-style race-to-the-bottom in rights and corporate taxes.” He also challenged May to stop playing politics with the 3 million EU citizens currently living and working in Britain: “Give them the full guarantees they deserve today. If you don’t, we will.” And while Corbyn’s rhetoric is unlikely to satisfy the most fervent Remainers, his declaration that “what matters in the Brexit negotiations is to achieve a settlement that delivers jobs, rights and decent living standards” is an appealing alternative to the ongoing Tory brawl over whether Britain should go it alone. Especially when, as the Trump administration’s $220 million tariff on Canadian aircraft firm Bombardier shows, life outside a big trade block can be fraught with peril.

A call for “support to end the oppression of the Palestinian people, the 50-year occupation and illegal settlement expansion and move to a genuine two-state solution of the Israel-Palestine conflict” brought the conference to its feet. (At the same time, Corbyn’s decision—backed by Momentum—to support a Jewish Labour Movement amendment to the party constitution toughening the language on racism and anti-Semitism was both the right thing to do and served to deprive his critics of a favored line of argument.)

But as befits a party with its roots in the trade unions, it was in Labour’s domestic agenda that the party’s new radicalism was most apparent. Not only the railways, but water, power—all “natural monopolies”—would be taken back into “democratically accountable public ownership.” Under Labour, cities would be given the power to regulate rents—and to prevent urban regeneration projects from becoming engines of “social cleansing.” Any proposal to redevelop public housing would need to be approved by a majority of existing tenants—who would be guaranteed comparable housing, at the same rent, in the new development.

With his command of the party now secure, Corbyn conjured up a vision not of central government as the ultimate arbiter and authority, but of a society in which power is devolved so that local people have control over their schools and hospitals. A future in which all education—from nursery school to medical school, from cosmetology to cosmology—is tuition-free, “so that no one is held back by costs and everyone has the chance to learn.” A world in which, instead of the Tory frenzy to shred the social contract, Britons are invited to imagine even the coming of automation as “a huge opportunity—if it’s managed in the interests of society as a whole.”

“We won’t reap the full rewards of these great technological advances,” Corbyn warned, “if they’re monopolised to pile up profits for a few. But if they’re publicly managed—to share the benefits—they can be the gateway for a new settlement between work and leisure.”

It’s easy—and tempting—to deride Corbyn’s optimistic rhetoric as unrealistic, and his economic policies as unaffordable. It may be particularly hard for Americans to imagine solidarity could ever replace the profit motive. But as Naomi Klein, who also spoke to the conference, reminded the delegates, “The stakes are too high and time is too short to settle for anything less.”

Besides, Britain already has a National Health Service. And a superb publicly funded broadcasting network. People here know what socialism feels like. But after Blair and Thatcher they may well have forgotten what a real socialist looks like—and sounds like. Not any more.