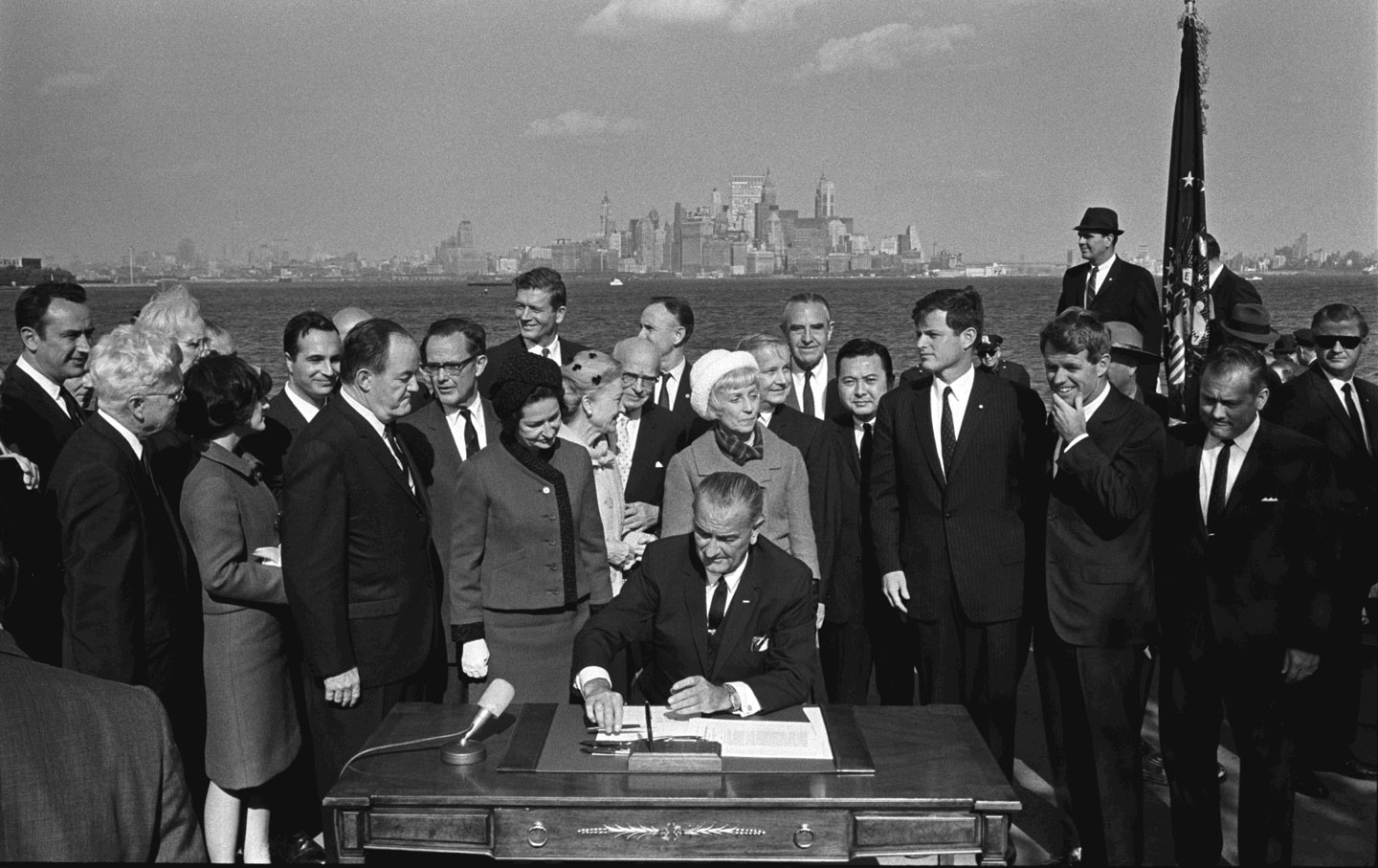 Immigration is now at the roiling center of the 2016 presidential campaign conversation, thanks largely to Donald Trump, whose unlikely command of the Republican race is based in good part on his take on the immigration question. Trump’s outrageous lies and shocking prescriptions—build a wall along the entire southern border, deport 11 million people, repeal birthright citizenship—are decidedly fringe notions. Yet he has succeeded in stoking nativist and racist sentiment in the party’s base and pushed the entire Republican field to the right. One wonders whether Trump will next call for sending the Statue of Liberty back to France.

It was at the base of this famous symbol, exactly 50 years ago, that President Lyndon Johnson capped a very different moment in the nation’s immigration history. Flanked by Hubert Humphrey, Jackie Kennedy, Senators Robert and Edward Kennedy, and a coterie of other congressional supporters, Johnson signed the Hart-Celler Immigration and Nationality Act of 1965 and reclaimed the idea that America was a nation that welcomed immigrants. Over the next five decades, 59 million people would make their way to the United States, according to the Pew Research Center’s latest report on immigration, issued on September 28. They would come from China, the Philippines, India, Lebanon, Pakistan, Brazil—from almost every country on the globe—dramatically shifting the country’s racial and ethnic landscape. Today, the foreign-born account for nearly 14 percent of the total population, a proportion we have not seen since the 1910s. What’s more, 88 percent of immigrants now come from non-European countries, the exact inverse of immigrants’ origins in 1960.

The Hart-Celler Act did have its deficits and inconsistencies, with which we are still grappling today. As much as it smoothed the way for many immigrants, it ended up making the path harder for others. But if the law had serious flaws, it was nonetheless the most dramatic rethinking of immigration policy in the last half-century and, as such, an effort whose achievements and pitfalls we would do well to study today, as we navigate our own immigration debate.

When Johnson signed the Hart-Celler Act, he hailed it as a milestone for civil rights—and, in many ways, it was.

First, what it accomplished. When Johnson signed the Hart-Celler Act, he hailed it as a milestone for civil rights—and, in many ways, it was. The signal achievement of the act was to abolish the noxious quota system, in effect since 1924, which numerically restricted immigration and allocated visas for permanent residents (green cards) according to national origin and race. The quota structure favored immigration from Northern and Western Europe, restricted it from Eastern and Southern Europe, and excluded Asians altogether. The 1965 immigration act got rid of this blatantly racist system and replaced it with one based on individual qualifications, giving preference to those with skills and those with family members in the United States. To further make the system fair, it set a uniform cap on all countries at 7 percent of the annual total. The emphasis on individual merit and on treating all nations the same was a quintessential expression of the civil-rights ethos of the time.

The result of Hart-Celler was a wave of mass migration not seen since the last great wave at the turn of the 20th century. And this influx has ended up being integral not only to the life of individual cities and regions but to the United States’ long economic expansion from the 1980s to 2008. Immigrants have supplied labor at both the lower and higher ends of the job market, from dry-wallers and agricultural workers to software engineers and hospital nurses. What’s more, they have added immeasurably to the nation’s vibrancy, embedding in our culture new literatures, cuisines, music, and businesses. In New York City, we all eat halal now.

And yet it is worth recognizing that when Johnson signed Hart-Celler neither he nor the Congress believed that it would increase immigration or change the composition of those seeking a home in the United States. They considered it a symbolic gesture of recognition for American Jews, Italian Americans, and others, whose forebears had streamed into the country through Ellis Island in the early 20th century, only to be locked out by the quota law in 1924. For the ensuing 40 years, those second- and third-generation Euro-American ethnics had watched, with a sense of frustration and injustice, as their relatives were blocked from entering the country.

Moreover, for all its liberal intentions, Hart-Celler was decidedly illiberal in crucial respects: It imposed numerical limits on the countries of the Western Hemisphere, which previously had no such quotas. At the same time, it subjected all countries to the same maximum limit of 20,000 new admissions a year (when Congress raised the overall ceiling by 40 percent in 1990, the country cap went up to just 26,500). Treating Mexico and India “equally” with, say, New Zealand and Belgium reflected the civil-rights era’s emphasis on abstract, formal equality. However, it also guaranteed that a significant portion of Mexican immigration would be unauthorized, because ongoing labor-market demands far exceeded legal avenues for entry.

Americans, both citizen and immigrant, have suffered the consequences of these limits ever since: more than 5.5 million people deported since 1965 (not counting the millions of additional “voluntary departures” and “returns”); 11.5 million now living and working in the shadows; 4 million US-citizen children with at least one undocumented parent; and ongoing agonizing debates over legalization, enforcement, and removal. Indeed, while Trump argues that unauthorized migration is rooted in Mexico “sending” us the “wrong kind of people,” the reality is at once more banal and insidious: a structural mismatch, woven into the Hart-Celler Act, between the visa system and the labor market.

Still, if Hart-Celler abounded with unintended consequences, a greater historical lesson concerns the dynamics of immigration politics. Challenges to the national origin quotas picked up steam after World War II, by which time the shared experience of a generation in depression and war had raised the stakes of equal citizenship. Buoyed by the benefits of the GI bill and post-war economy, Euro-American ethnics enjoyed both a greater sense of power and, perhaps, a greater sense of outrage over the injustice of the quotas. A movement for full and equal inclusion sprung up, targeting immigration restrictions along with discrimination in employment, college, and law-school admission quotas, and exclusion from private clubs. Immigration reformers drew inspiration from and marched in solidarity with African-Americans’ fight against Jim Crow segregation.

Throughout the 1950s, however, a Republican-controlled Congress blocked all bills seeking to repeal the national-origin quotas. It was only in the 1960s that legislative change finally became possible, for a number of reasons. There was, to begin, a greater liberal sensibility throughout American society. More pragmatically, the Kennedy administration considered civil rights an important Cold War propaganda tool: Jim Crow and the national-origin quotas both undermined the United States’ claim to be leader of the free world. Perhaps most consequential was the calculus of electoral demography. Euro-American ethnics had emerged as key voting blocs in the urban industrial North, as visible constituents of organized labor and the Democratic Party. It now behooved elected officials to listen to them.

The 89th Congress, elected in 1964, had the largest Democratic majority since the New Deal. It passed a bevy of Great Society and civil-rights laws, including the immigration law that repealed the national-origin quotas. Its sponsors were Philip Hart (D-MI), a liberal known as the “Conscience of the Senate,” and Emanuel Celler (D-NY), the beloved congressman from Brooklyn who had been in the House since 1923 and was perhaps the longest running opponent of the national origin quotas.

Recalling the civil-rights history of Hart-Celler, especially in its grassroots movement and electoral shifts, helps us think about immigration reform today. In the post-war years, American Jews, Italian-Americans, and other European ethnics were the drivers of reform. They had allies, of course, and they prevailed only when international and domestic politics aligned, but they made reform imaginable, then necessary, finally urgent. The same could be said about immigration politics today. Latinos are now 18 percent of the US population and Asians are 6 percent, compared to 4 percent and less than 1 percent in 1965 respectively. Their claims for full inclusion—most vividly projected by the “DREAMers”—have won sympathy across a broad swath of Americans. Latinos were the key vote in a half-dozen states that swung the 2008 and 2012 presidential elections.

The path to immigration reform may again be long and twisted, but the outcome may be read in the inexorable facts of demography. Trump’s shenanigans and the ugly nativism he has unleashed may be consequential in the short run, but in the long run they are irrelevant.