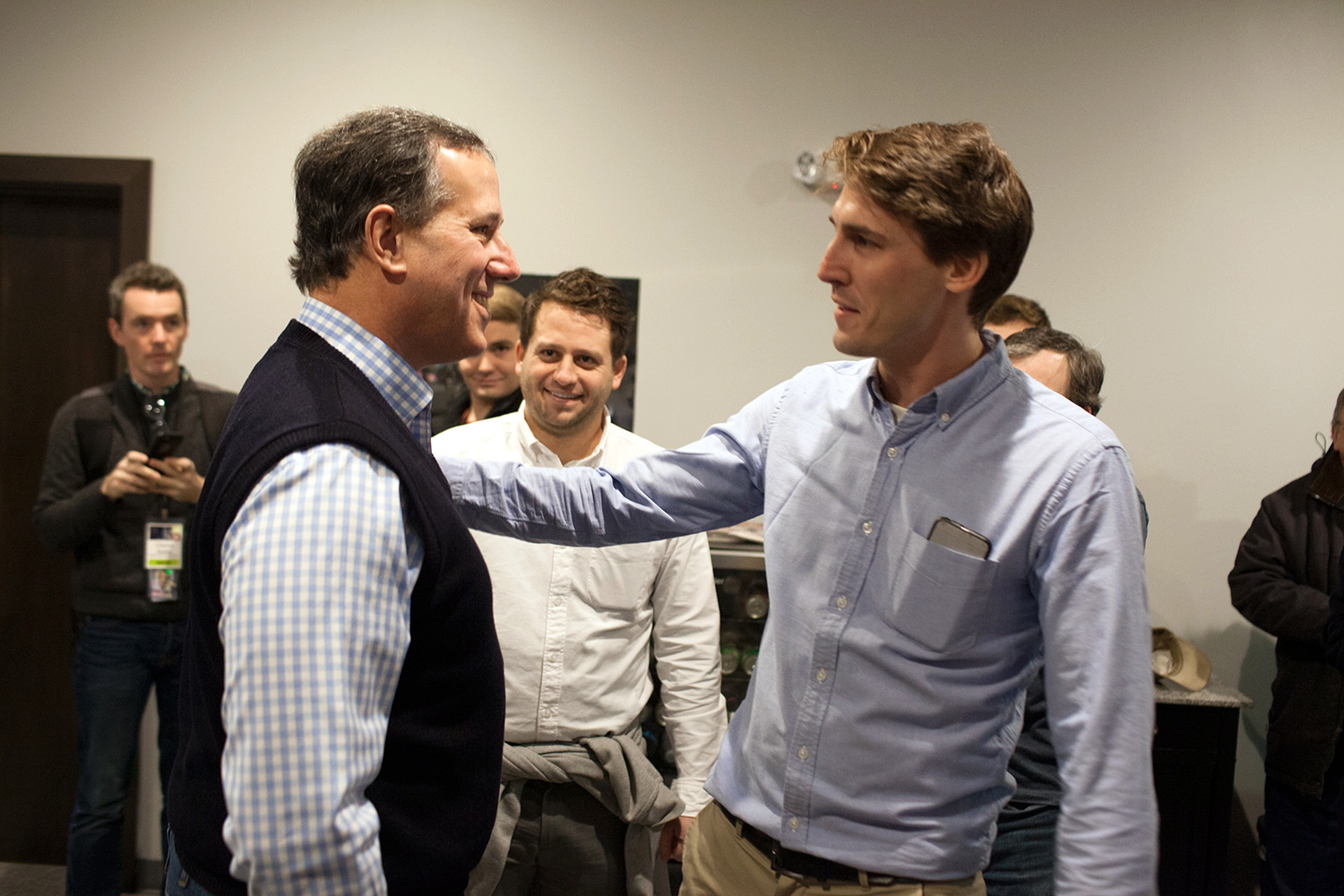 Jason Selvig of The Good Liars poses as a Young Republican greeting Rick Santorum at a gun range on January 30, 2016. His accomplice, Davram Stiefler, looks on. (Photo Courtesy of Thomas Bollier)

The “jealous man” (Washington Examiner) who interrupted Marco Rubio’s rally on Sunday to accuse the Florida senator of stealing his girlfriend (“they met in New Hampshire and she doesn’t look at me in the same way anymore”) appears to be one half of a comedy duo that has infiltrated various events during the 2016 campaign.

A Buzzfeed reporter at the Rubio rally said on Twitter that it “seemed pretty clear he was acting.” On Monday, a photographer for Playboy photographed the pair wearing armbands at a Donald Trump rally, while a reporter for The Boston Globe noted that the very same men had been seen behind Hillary Clinton last month wearing shirts that said “Settle for Hillary.” It didn’t take long after that for Twitter to find other signs of the pair.

Performing as the Good Liars, Selvig and Stiefler act as “guerrilla comedians” in order to—as an interviewer put it in 2013—“wage war against unscrupulous corporations, corrupt politicians, idiotic ideologies.” It would be, Selvig said, as if the Yes Men had sex with Borat, and produced twins.

All of which is fairly easily to figure out with a little bit of Googling. More than a month ago, The Boston Globe rounded up some of the Good Liars’ 2016 stunts, though it somehow missed the Trump Tower video that provides the comedians’ real names.

But here’s what you can’t Google: Two days before the Iowa caucuses, the Good Liars posed as supporters of Rick Santorum and shot guns with the former Pennsylvania senator at a range in Boone, Iowa.

To all appearances, Selvig seemed to be the host of the event, posing as a very plausible Young Republican, welcoming Santorum upon his arrival and telling him that he reminded him of his father. He sat next to Santorum during the perfunctory five-minute safety instruction.

Together they walked over to the shooting range (along with a gaggle of photographers), where they fired a series of handguns and assault rifles, including an AR-15. Meanwhile, Stiefler, the one whose girlfriend Rubio “stole,” stood alongside Santorum.

“I feel like I’ve got so much power right now!” Selvig shouted after firing the AR-15. (The line was too good not to use in an earlier article—so we did—but now it seems like it was too good to be true.)

The next day, a rally for Chris Christie was held at a winery just outside Ames, Iowa. Before the event began, Selvig stood near the stage beside Stiefler. They were wearing the same light-blue and white Oxford shirts they’d respectively worn at the Santorum event the day before (and which they can be seen wearing at every event where they’ve been photographed during the campaign). When the writers asked Selvig whether we had not seen him the day before at the Santorum event—and whether he had not told Santorum he reminded him of his father—Selvig acted as if we had just outed him as a CIA agent in the capital of the enemy. “We’re not supposed to talk about it,” Selvig solemnly demurred.

The emotional climax of Christie’s speech came when he beseeched his audience to think, when they went to vote, of a mother sending her son off to the Army. Who would they want as commander in chief to bear responsibility for ordering that son to war? The obvious implication was that Donald Trump, whom Christie endorsed just over a week later, was not a plausible choice for the presidency. Near the front of the crowd, Selvig and Stiefler appeared to be sobbing into their sleeves.

Afterward, Christie greeted people near the stage. Stiefler stepped up and offered his hand. Christie took it. Stiefler, now with dry eyes, asked the New Jersey governor, “Why should Republicans vote for you when you sold us out in 2012 by hugging the president?” Christie moved on. Whether they are filming a documentary or just making a splash, credit is due the Good Liars for managing to get within inches of Rick Santorum with deadly weapons in their hands. It’s only one of several intriguing points they have made through their interventions during this campaign. But if it has taken so long for reporters to connect the dots, it may be because these “guerrilla comedians” are getting beat at their own game. “We like to kind of put on hats of big corporations or groups and say the things that they won’t say, but really are saying,” Selvig told that interviewer in 2013. Their YouTube videos have at most a few hundred views; Donald Trump has a decent chance to become the next president of the United States.