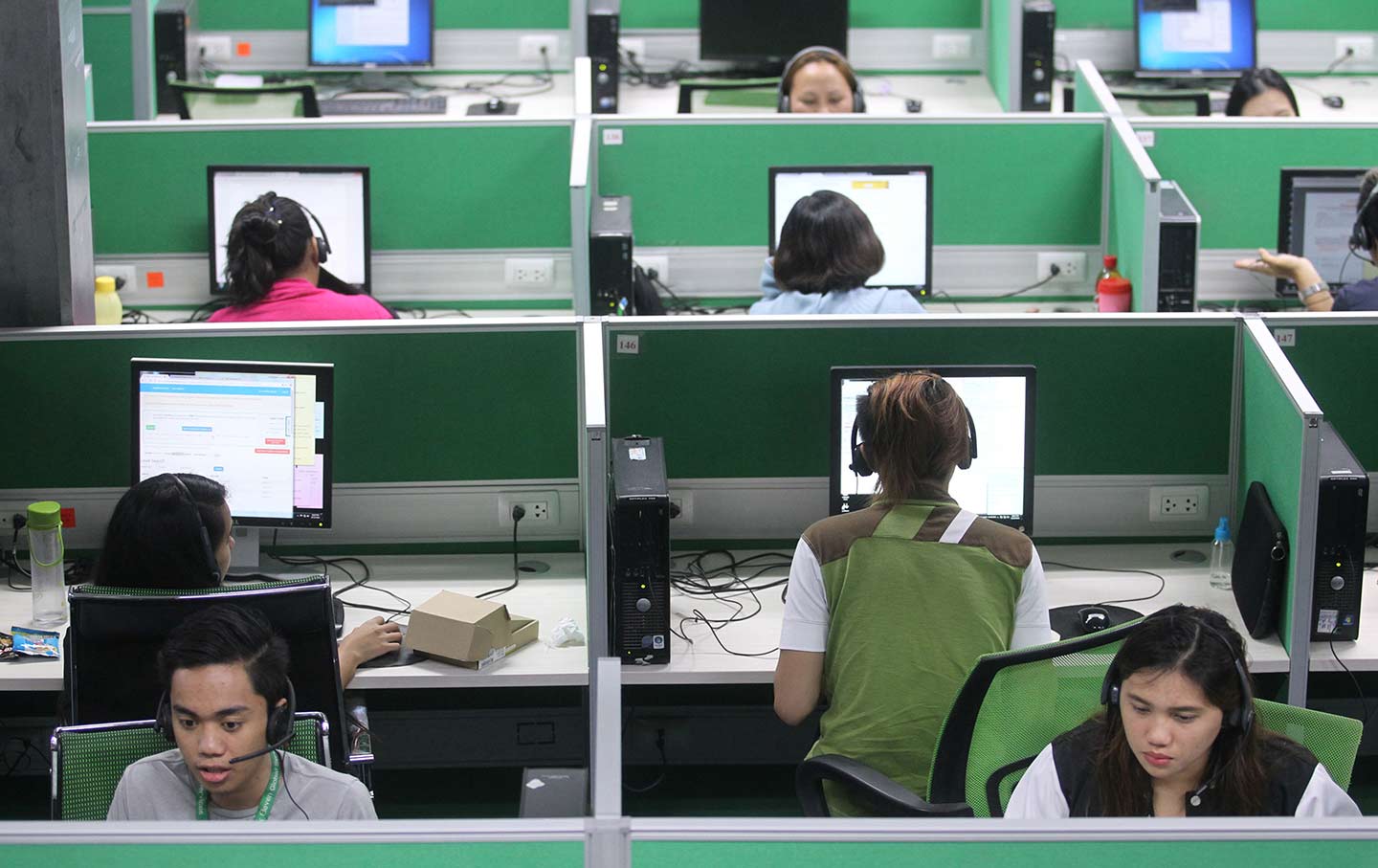 Employees work at a call center in Davao City in the southern Philippines on December 13, 2016. (Reuters / Lean Daval Jr.)

The call center seems like the workplace of the future, the cubicled office job that brings modern development to anywhere with a phone connection, from Boston to Bangalore. But throughout AT&T’s network of call centers in the Global South, cries of frustration over low wages, long hours and union busting are ringing out.

A new report by the union Communications Workers of America (CWA) outlines how AT&T’s outsourcing of jobs to overseas third-party contractors is turning once-stable, US-based union jobs into exploitative low-paid gig work in Asia and Latin America. The profits netted from outsourcing exacts a heavy price, they argue, both for underpaid workers and for poorly served consumers worldwide.

Workers at call centers in the Philippines... might earn just $2 an hour for a job that would have paid a living wage with benefits in the US.

The report affirms rising unrest among CWA members in AT&T’s US divisions, who have threatened to strike in the coming weeks as contract talks for call centers workers stagnate amid what they call a global “race to the bottom for the lowest wages.” After raging for years about the loss of jobs through offshoring, AT&T workers have made it a major flashpoint in long-running contract talks which also touch on similar grievances among wireless, retail and cable employees about declining job quality. With at least 29 call centers shut down nationwide, about 12,000 jobs have vanished since 2011—many of them from low-income rural and urban communities who had relied on call centers to support stable service and technical careers. Meanwhile, the telecom giant’s subcontracted overseas workforce has mushroomed in poorer countries like India, Mexico, the Dominican Republic and El Salvador.

Workers at call centers in the Philippines, for example, might earn just $2 an hour for a job that would have paid a living wage with benefits in the US. Mexican call center base wages range from $3.97 to $4.58 an hour, and in the Dominican Republic, as little as $2.13. Though the pay is often better than wages in ordinary local jobs in these countries (Mexican factory workers, for example, make less than $3 an hour, and the estimated living wage in the Dominican Republic is about $2.83), in terms of how workers are treated, the offshored jobs can’t compare to the US jobs that AT&T has abandoned.

Globally, the company imposes a “sales focused” marketing system, which pressures workers in high-stress customer support operations to exhaust themselves in order to reach arbitrary performance targets. Sometimes sales targets for “incentive” pay prove nearly impossible to reach. According to surveys of workers at two centers of the subcontractor Alcora, “only about one quarter of workers surveyed actually earned sales incentives,” and their jobs often hinge on it. Regionally, Philippines AT&T centers are known for being especially harsh even by industry standards, as workers may be fired within a few months for falling short of targets. In El Salvador, surveyed workers reported experiencing extreme financial stress, and some had been forced to drop their college studies in part because of “fatigue and deteriorating health due to working conditions.”

Governments in the Global South often court multinationals such as AT&T through so-called special economic zones, which offer tax breaks and more lax labor regulations in exchange for foreign investment. In the Dominican Republic, call centers are still seen as decent-paying middle-tier jobs for aspiring young workers with some education. Many are actively recruited into special training programs aimed at feeding the English-speaking call center workforce.

But this “growth sector” is founded on suppression of labor rights. Oliver Benson, a union organizer working at a Teleperformance call center in the Dominican Republic, says management harasses and threatens workers with retaliatory dismissal to deter them from organizing workers. This has made it difficult for workers to pressure the firm into a full collective bargaining process.

Describing offshoring as a form of “colonization” Benson says, “we have these companies who came from other countries to the Dominican Republic, and they take advantage of our culture, our [limited] education, and our poor economy, so they do all that they want to do with us.” Since business-friendly labor regulators regularly fail to enforce workplace protections, Benson adds, “the government just lets these companies come into our country, but they don’t do anything about our salaries or the bad treatment of employees, and of course [nothing about forming] unions inside the companies, which is a right that we have by law.”

Under such degraded conditions, both job quality and performance are suffering, globally. The union’s surveys of corporate employees found that vendors frequently ran into troubles like dropped calls, data breaches, and other tech security issues for US customers. The complaints range from botched calls and misinformation to deceptive sales practices for promotions or unwanted extra services. With some 85 percent of surveyed US staff reporting having to “solve customer problems caused by overseas vendors several times per week,” the union says the harsh working conditions at call centers abroad undercut service quality at home.

US workers meanwhile argue that job insecurity is threatening hard-won union wages and benefits. CWA hopes the upcoming potential massive strike could mirror the victory of Verizon workers last year, which led to revamped contracts that saved about 1,300 US jobs after massive strikes during the height of the election season. Meanwhile, CWA’s parallel opposition to domestic subcontracting and outsourcing issues in AT&T’s cable division further highlight how outsourcing and precarity destabilize workers within the US as well. But AT&T claims it is committed to negotiating a fair contract and is following industry trends.

Still, at the end of the day, the flight of capital from unions and communities can only be checked by a global labor movement that unifies workers without borders.

“The government just lets these companies come into our country, but they don’t do anything about our salaries or the bad treatment of employees.”

Hanoi Sosa, an organizer with Benson’s union, empathizes with US-based workers struggling to keep their jobs at home. Many Dominican Republic workers have also suffered job losses as their once-booming textile industry has hemorrhaged factory jobs to lower-wage countries like Bangladesh and Honduras. The challenge for all workers, he says, is “globaliz[ing] the union movement as the economy has been globalized…. When these companies come from countries like the US…what they’re exporting is not job opportunities, they’re exporting exploitation—exploitation they cannot implement in countries like the US because they have a very clear set of rules. They’re exporting it to the Dominican Republic because of our institutional weakness. But if we work together, if we fight together…we can at some point demand altogether better labor conditions everywhere.”

As the world divides and shrinks through faceless communications networks, call-center cubicles just might become a new common ground for building a united front against a borderless race to the bottom.