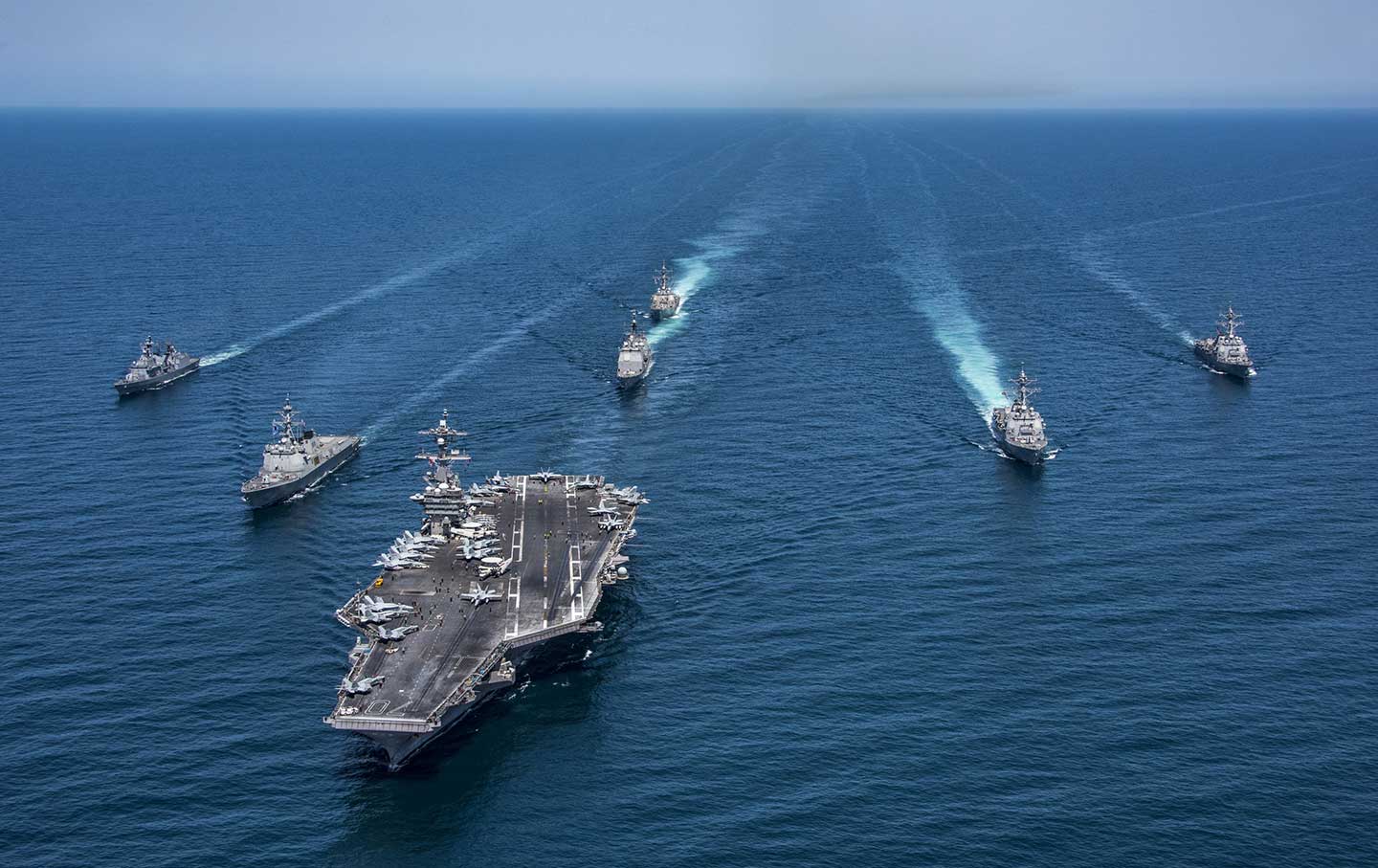 US and South Korean battleships in the western Pacific Ocean in May of 2017. (Reuters / Courtesy of the US Navy)

“There’s battle lines being drawn,” Stephen Stills sang in the 1960s song that became an anthem for the anti-Vietnam War movement. Today those same words can be applied to the escalating confrontation between the United States and North Korea over the latter’s nuclear-weapons and missile programs.

That conflict will be front and center when President Donald Trump pays his first state visits to Japan and South Korea in November. In Japan, where Prime Minister Shinzo Abe—Trump’s closest friend in the region—just won a smashing reelection victory, Trump will be honored with an audience with the country’s aging emperor and his usual golf game with the hawkish Abe.

But in Korea, where there is far more ambivalence about Trump’s policies, antiwar groups and unions—many of which backed President Moon Jae-in’s election campaign last spring—are planning major rallies to greet him. As a precursor to what’s to come, South Korean activists this week in the southern port of Pusan handed out leaflets reading “US Troops Go Home!” to US soldiers arriving for another round of military exercises with the South Korean military.

They have good reason to be concerned. Listening carefully to the Trump administration and the government of Kim Jong-un over the last week, it’s becoming increasingly clear that the two sides are trying to signal the limits of their policies—and their patience. Nobody is sure whether these statements are a prelude to the diplomacy long promised by Trump’s national-security team, or the opening salvos of what will be a bloody and destructive war if the situation explodes.

Trump, who appears to have stopped tweeting about Kim, is leaving the policy pronouncements to H.R. McMaster, his national-security adviser, and Mike Pompeo, his CIA director.

Both men have been warning for weeks about the possibility of a risky “preventive” war that would theoretically destroy North Korea’s nuclear and missile capability and—in a strategy known as “decapitation”—take out Kim and his military leadership team in Pyongyang. (As if to underscore that threat, a team from the Navy’s SEAL Team Six, which assassinated Osama bin Laden, was aboard the nuclear submarine USS Michigan as it participated in recent bilateral maritime drills with South Korea.)

Last week, in separate appearances before the Foundation for Defense of Democracies, McMaster and Pompeo made clear that Trump’s endgame is the termination of the North’s nuclear program, by any means necessary. Trump “is not going to accept this regime threatening the United States with a nuclear weapon,” McMaster told the organization, which has supplanted the American Enterprise Institute as the spiritual home of the neocons.

McMaster also ruled out the suggestion, made by some former US officials, that Trump should accept the North as a nuclear power, like Pakistan and Israel, and build a system of deterrence similar to the containment policies of the Cold War.

“Well, accept and deter is unacceptable,” said McMaster, who first gained his fame as a counterinsurgency innovator in Iraq during the Bush “surge” of 2008. “And so, this puts us in a situation where we are in a race to resolve this short of military action.” He repeated his bottom line twice: “The only acceptable objective is denuclearization.”

Pompeo signaled that US intelligence has concluded that the North is closer than ever to building a capability to place a nuclear weapon on an ICBM and lob it great distances. “I expect they will be closer in five months than they are today, absent a global effort to push back against them,” he said, adding that “from a US policy perspective, we ought to behave as if we are on the cusp of them achieving that objective.”

He also argued that the United States viewed North Korea as a dangerous threat even if its rockets can’t reach the continental United States. “There are enormous US interests in South Korea and Japan and in Asia, as well,” he said, speaking of the vast string of US Navy, Air Force, and Marine bases that ring North Korea.

But, in an odd aside for a man threatening war, he added that “Intelligence isn’t perfect, especially in a place like North Korea,” making it possible that the United States could be “off by months or a couple of years in our understanding.” (“Hell of a thing for anyone in this [administration] to be considering a first strike on North Korea while the CIA director notes intel ‘isn’t perfect,’” Ankit Panda, a senior editor at The Diplomat, tweeted in response.)

The intense focus by McMaster and Pompeo on military action has led many observers to wonder whether Trump has decided to abandon the negotiations promised since the beginning of the crisis by his top officials at the Pentagon and the State Department, James Mattis and Rex Tillerson.

In August, they co-authored a highly unusual op-ed in The Wall Street Journal in which they essentially offered to open negotiations with Kim without preconditions, including the North’s immediate abandonment of nuclear weapons. Talks were possible, they said, if Kim would “signal his desire to negotiate in good faith” by ceasing North Korea’s tests and missile launches for a period of time. However, it’s unclear that such an offer is on the table any longer, even as both Mattis and Tillerson continue to insist that diplomacy is their chosen route.

For its part, the North, which has recently taken to calling Trump “mentally deranged,” has rejected the idea of total denuclearization and instead argued that the United States should make the “right choice” by recognizing it as a nuclear state. That would lead to a “way out” of the current standoff, Choe Son-hui, the director-general of the North American department of North Korea’s foreign ministry, told a recent conference in Moscow attended by several Americans.

South Korean officials who were there told the Yonhap wire service that Choe stated that the North “will never give up its nuclear weapons as long as the US’ hostile policy, including military activities, sanctions and pressure, continue.” Further details of her speech were broadcast on the Russian-state media outlet RT.

“Our weapons are designed for the protection of our homeland from the constant nuclear threat from the US,” Choe said, adding that her government “won’t supply nuclear weapons to third parties, notwithstanding its withdrawal from the Non-Proliferation Treaty (NPT).” Moreover, “despite quitting NPT, we are committed to the idea of non-proliferation of our nuclear weapons.”

Diplomacy With North Korea Has Worked Before, and Can Work Again

Choe’s emphasis on the United States’ “hostile policy” offers a ray of hope, says Suzanne DiMaggio, a former United Nations official and a senior fellow at New America who spoke on the same Moscow panel as Choe. In a long string of tweets on October 23, DiMaggio wrote that “there is a ‘way out.’ The US needs to abandon its hostile policies” and “[s]top provocative military exercises & nuclear threats.”

The United States’ priority, DiMaggio added, should be to get talks underway by first engaging in bilateral “talks about talks,” without preconditions, so both sides can “clarify positions” and “explore what’s possible.” And “while not abandoning denuclearization as [an] end goal,” the United States “should set it aside” because “it’s currently outside realm of possibility.”

Instead, she urged that the Trump administration focus on “achievable” goals, such as deterrence and non-proliferation, and then “pursue talks to address” the policies the North considers hostile. While “this would be a longer, arduous discussion,” involving a peace agreement and security guarantees, it’s better than the alternative, she offered.

“We are in dangerous territory,” warned DiMaggio, one of a group of former US officials and intelligence officers who met informally with North Korean officials from time to time, in her Twitter analysis. “In Washington policy making circles, talk of kinetic options is increasingly heard,” she continued (kinetic is a term for lethal military operations). “The longer this course persists [or] intensifies, the greater the chances for spiraling into military conflict by design or miscalculation.”