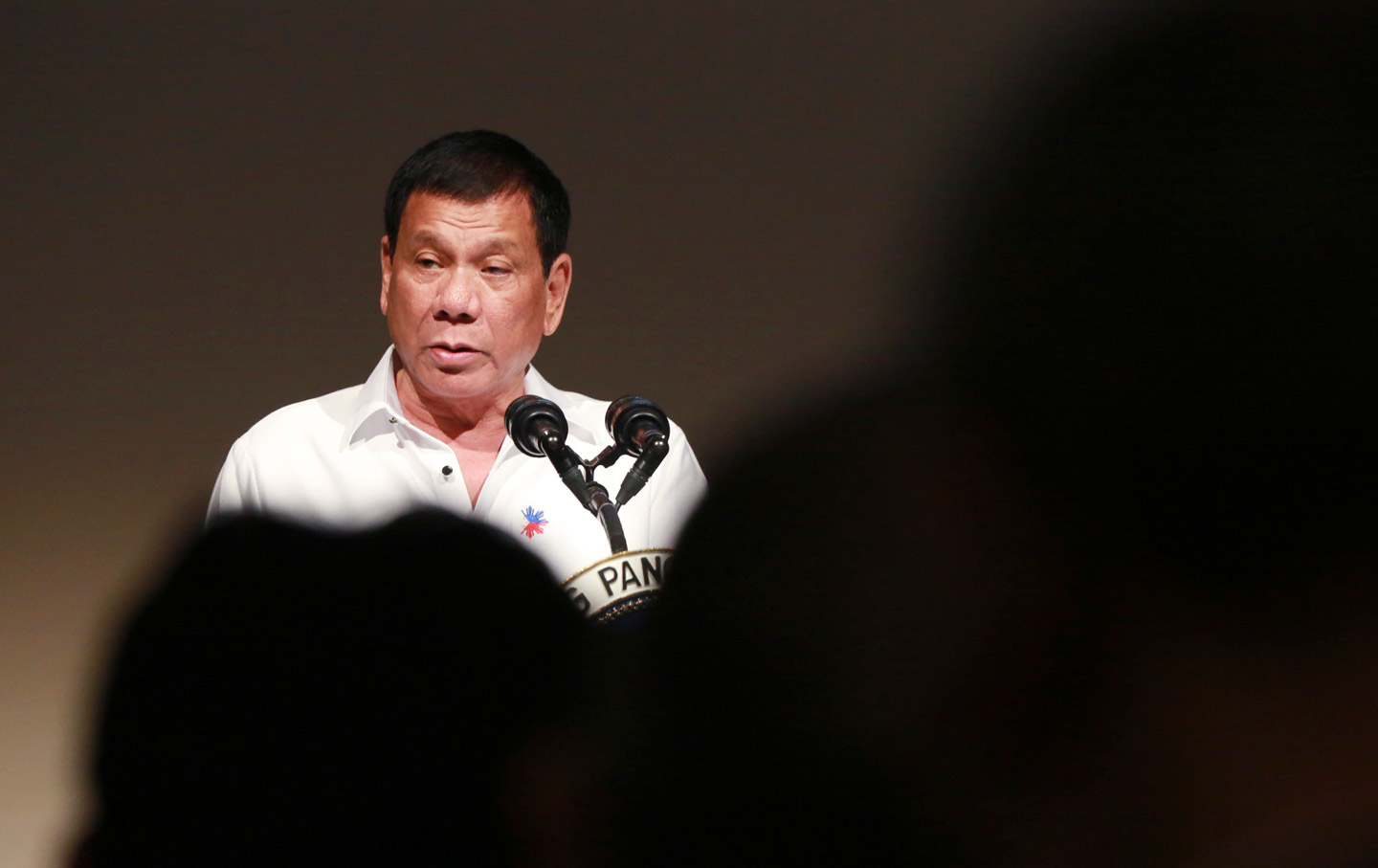 It’s a curious time for “People Power” in the Philippines, a country that has long wavered between democracy and authoritarianism. Newly elected President Rodrigo Duterte has spent his first 100 days on a disturbing kind of populist campaign—appealing to the will of the masses by killing masses of people. His zero-tolerance war on drugs has already claimed several thousand lives, some directly killed by police, countless others extinguished by vigilantes operating with impunity in collusion with state actors.

Yet Duterte’s regime may lose some populist credentials, as its brutal anti-crime crackdown shades into a pattern of anti-labor violence.

At a late September rally, advocates with the labor organizations Partido Manggagawa and Philippine Airlines Employees Association expressed frustration with the government’s emphasis on combating crime rather than addressing crucial welfare issues. Activists listed colleagues recently killed amid the wave of state-sponsored killings and demanded a serious investigation by the Department of Labor:

Last week, Edilberto Miralles, former union president, was gunned down in front of the National Labor Relations Commission. On September 17, Orlando Abangan, a PM leader and organizer in Cebu, was ambushed on his way home. Last Sunday Patricio Tago Jr., a union vice president, was abducted in Tarlac and then imprisoned for allegedly being a drug pusher. Labor groups have called the drug charges as trumped-up.

Besides the latest fatal shooting of a farmer in Palawan, earlier this month, four farmers were shot dead in Nueva Ecija and then a farmer leader killed in Isabela.

While Duterte presides proudly over a death toll exceeding 3,000, activists point to 40 million workers struggling for basic survival amid massive unemployment and anti-labor suppression. Despite decades of neoliberal export growth, the most common working-class jobs remain in the informal sectors or exploitative manufacturing facilities on short-term contracts—systemic economic problems that many hoped Duterte would tackle through broad-based development.

As part of a recent human rights review by the United Nations Committee on Economic, Social, and Cultural Rights, the Center for Trade Union and Human Rights (CTUHR) reported that nearly three-quarters of workers, about 28 million, “are informally employed with little or no protection from job losses and opportunities to find gainful employment.” Jobs are often brokered through exploitative “manpower” agencies under a “flexible” basis on five-month contracts. A recent survey in Metro Manila showed that about 85 percent of workers had been hired on five-month contracts by illegal labor agencies. Even in relatively prosperous “Special Economic Zones,” manufacturing workers in supposedly higher-grade export industries such as electronic semiconductors have become permanent temp workers, toiling up to 12 hours a day, without days off, going years without a stable contract. Young workers, erroneously labeled “trainees” despite being out of school, and women garment workers producing for multinational brands, are particularly vulnerable to wage violations. (And minimum wage standards, when they are met, are miserably low, typically less than half of an estimated family living wage)

The Filipino President Just Set Off a Diplomatic Earthquake

People Say the Next Philippine President Is a Lot Like Trump. Here’s Why.

The US Military Just Plunged Philippine Politics Into Crisis

Once hired under flexible contracts, workers are exposed to unsafe conditions and can be freely fired or retaliated against for engaging in workplace organizing. According to CTUHR, “14,725 workers lost their jobs in 35 cases of mass lay-off and closure” in retaliation for union organizing activity.

In a follow-up correspondence, Daisy Arago of CTUHR confirmed that despite the labor-friendly platform of the current government, the labor-rights situation “remains basically the same in the first 100 days of Duterte administration. Of course, we appreciate the promise and the marching order of President Duterte to [end the five-month labor contract system] and increase the workers’ wages, but we have yet to see the translation of such promises into something tangible.”

Partido ng Manggagawa official Benjie Velasco says via e-mail that Duterte’s anti-crime strongman rhetoric attracted both affluent and working-class voters who were won over by “his persona that he is not the usual politician (does not lie but tells things as they are, a man of action who can deliver).” His boorishness and nationalistic bloviating, bolstered by favorable media coverage, has given him a mass appeal that draws comparisons with Donald Trump.

Velasco acknowledged Duterte’s brazen authoritarianism remains popular, even among labor activists alarmed by recent killings of trade unionists. In contrast to labor’s plight under previous right-wing regimes, “We don’t think the incidents are part of a war [against] unions,” Velasco argued, but that they are rather a more opportunistic brutalism: “Particular enemies of labor unions embroiled in local disputes or struggles are riding on the wave of killings and climate of impunity due to the war on drugs [seeking] to perpetrate the murders and abduction of local labor leaders [and] activists.”

However, Velasco adds, “I believe Duterte’s popularity spring[s] more from his style than substance,” but the war on drugs won’t substitute for economic security, if he insists on consolidating his political power “at the cost of an escalating body count and the death of constitutional and legal guarantees for human rights and due process.”

A recent survey shows that the public sees “improving salary and job generation as the most urgent national issues that the government must address with 46 and 38 percent, respectively,” according to the Philippine Daily Inquirer.

Meanwhile, some left labor groups are frustrated that the current government has been amenable to the business lobby’s push to weaken labor-reform proposals. While unions seek greater protections for collective bargaining, employers have promoted compromise legislation that would encourage more subcontracting with only weak improvements in worker benefits.

Since Duterte will ultimately have to answer for a campaign agenda based on fair employment, Velasco adds, he will have to heed “our call for a war on poverty, not a war on drugs.”

Partido ng Manggagawa Chair Maagtubo, at an October rally with the Church Labor Coalition marking Duterte’s first 100 days in office, condemned the impunity that Duterte has unleashed, reminding the administration that human rights and true security should be seen as inseparable priorities: “Mr. President, we have 100 million Filipino lives to protect, 40 million good jobs to create, and 26 million people to lift out of poverty. If you will only consider the drug problem as both eco-social and public health issues, war against poverty is a better war to wage.”