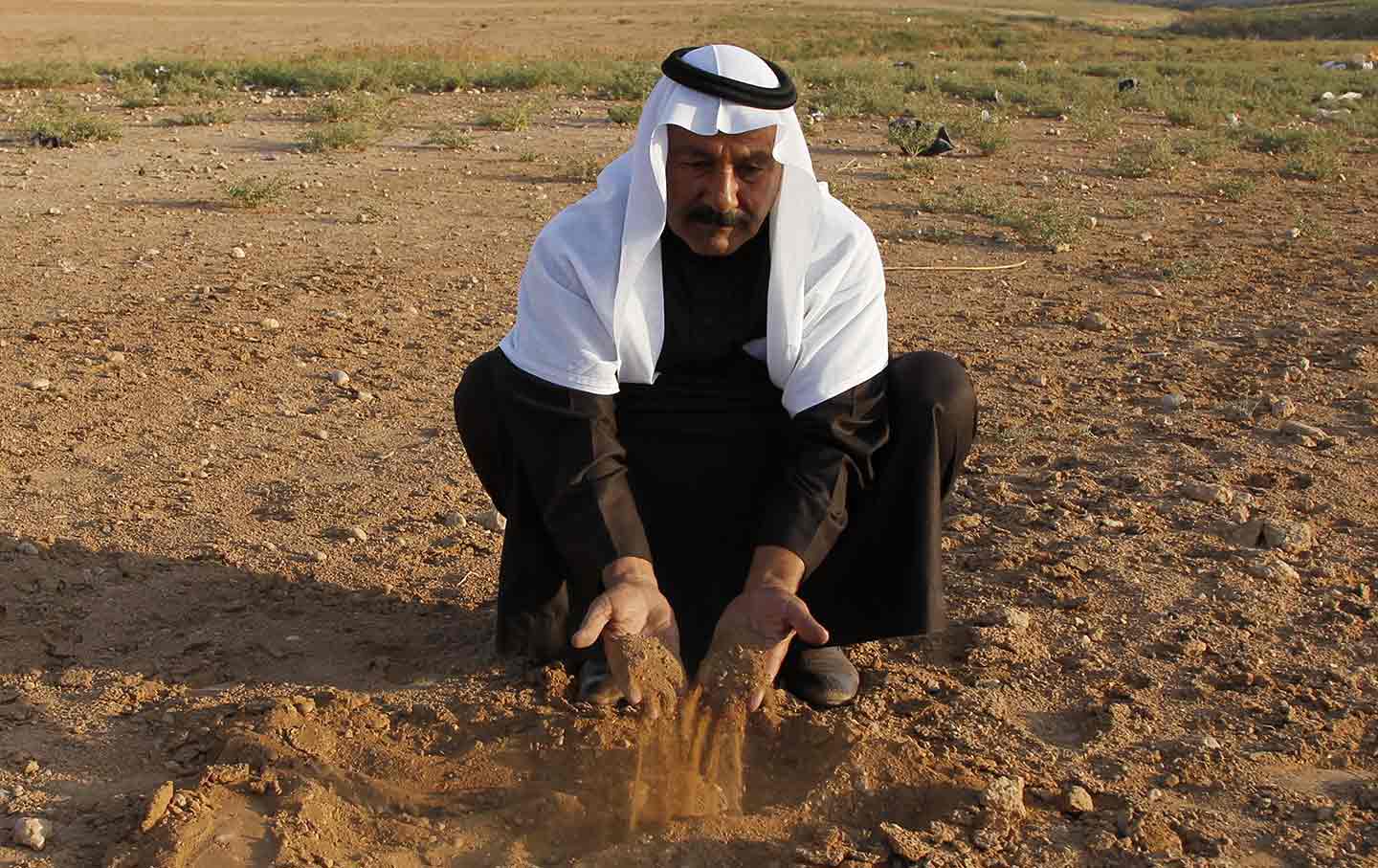 Sheikh Ghazi Rashad Hrimis handles dried earth in the parched region of Raqqa province in eastern Syria, during the drought that displaced half a million people, November 11, 2010. (Reuters / Khaled al-Hariri)

The gas attack in Syria on April 4 consumed the world’s attention and galvanized the Trump White House, leading to the launch of 59 cruise missiles on a small airport from which the regime of Bashar al-Assad has been bombing the fundamentalist rebels in Idlib province. The pictures of suffering children, Trump said, had touched him. Yet the president and most of his party are committed to increasing the daily release of hundreds of thousands of tons of a far more deadly gas—carbon dioxide. Climate scientist James Hansen has described our current emissions as like setting off 400,000 Hiroshima atomic bombs each day, every day of the year. 1

The Syrian civil war has left more than 400,000 people dead, among them graveyards full of children and innocent noncombatants. About half the country’s 23 million people have been left homeless, and of those, 4 million have been driven abroad (some of them contributing to Europe’s refugee crisis and its consequent rightward political shift). The war occurred for many complex reasons, including social and political ones. The severest drought in recorded modern Syrian history in 2007–10, however, made its contribution.2

The mega-drought drove 1.5 million farmers and farmworkers off the land to the seedy bidonvilles ringing cities such as Homs and Hama. In the northeast, 70 percent of the farm livestock died in those years. These displaced and dispossessed day laborers, who seldom found remunerative new work in Syria’s stagnant urban economy, joined in the demonstrations against the regime. Some were later drawn into the civil war as militiamen. Others in the end fled their country. 3

A team of scientists found no natural explanation for how rapidly Syria has been drying out over the past century.

Of course, Syria has had milder periodic droughts all through history. Moreover, some countries in the region, such as Israel, have been much better at water management than the decrepit Baath state in Syria. It matters how such crises are handled. A team of scientists writing in the Proceedings of the National Academy of Sciences last year, however, found no natural explanation for how rapidly Syria has been drying out over the past century or for the withering severity of the latest drought. Human-caused climate change, which has raised the temperature of the planet 1.5 degrees Fahrenheit since 1880, they concluded, made this Frankendrought as much as three times more likely to happen than if our coal plants, factories, and automobiles had left Mother Nature alone.4

A new paper by Professor Michael Mann of Penn State and colleagues comes to the alarming conclusion that human-caused climate change is messing with the jet stream, the thin band of powerful gales in the upper atmosphere that blow from west to east and sometimes loop north or south. Mann and his team found that as the earth has heated up, the jet stream sometimes gets stuck in a particular pattern, fixing weather extremes such as droughts in place for longer. This effect was in part responsible for the massive flood in Pakistan in 2010, which killed 2,000 people, made 20 million homeless, and for a time submerged a fifth of the country. If Trump is tenderhearted about dead children, perhaps he should consider those his beloved coal industry helped to drown at that time. 5

In 2016, as with the previous two years, the world put 32 billion metric tons of carbon dioxide into the atmosphere. CO2 is a deadly greenhouse gas that turned Venus into a torrid hellhole hot enough to melt lead. Corporate news outlets celebrated this level of emissions as “flat,” i.e., the number did not increase from the previous year. 6

Did ISIL Arise Partly Because of Climate Change?

In Trump’s Cruise-Missile Diplomacy, Iran and North Korea Could Be Next

After the Chemical Attack, It’s Time to Get Rid of the ‘Muslim Ban’

The emissions are not “flat,” however, since they are cumulative. It is like saying that someone trying to lose weight had only put on 32 pounds last year, the same as the year before, and the year before that. That way lies morbid obesity, not holding the line on weight gain. Some 15 percent of this poison gas will be in the atmosphere for thousands of years. Even the CO2 that is more quickly washed out of the air typically goes straight into the oceans, where it turns them acidic. A mass die-off of marine life will ensue over time (mass coral bleaching, caused by record ocean temperatures, has already destroyed much of Australia’s Great Barrier Reef). Climate change is expected to raise sea levels some four feet by the end of this century. It should not be expected that the rise will necessarily be smooth. With storm surges, the loss of life could be substantial.7

The United States, with only 5 percent of the world’s population, put up 5.17 billion metric tons of carbon dioxide in 2016 all by itself—some 16 percent of the total. Although the US government announced that US emissions fell by 1.7 percent over the previous year, again, such a slight decrease is meaningless if we keep in mind that the amount of CO2 in the atmosphere is constantly increasing. So we only set off 393,000 atomic bombs in the atmosphere every day last year. So what? We need zero emissions, not almost as many as last year.  8

As Representative Keith Ellison has pointed out, some two-thirds of Syrian refugees are women and children, and fully one-third of them are under the age of 12. The world was shocked in September 2015, at the image of little Aylan Kurdi washed up on a Turkish beach, having failed to make it to a Greek island. Aylan was a Syrian refugee, not only from war, but from climate change. Trump and the climate-destroyers he brought into office with him such as Rex Tillerson and Scott Pruitt are not driven by compassion for victims. They are animated by a callous and rapacious search for profits for themselves and their cronies. If they cared about children killed by noxious gases, they wouldn’t want to ban Syrian refugees like the Kurdis from the United States. Nor would they want to spew ever more tons of the most noxious gas of all into the blue skies of the only planetary home the human race has. 9