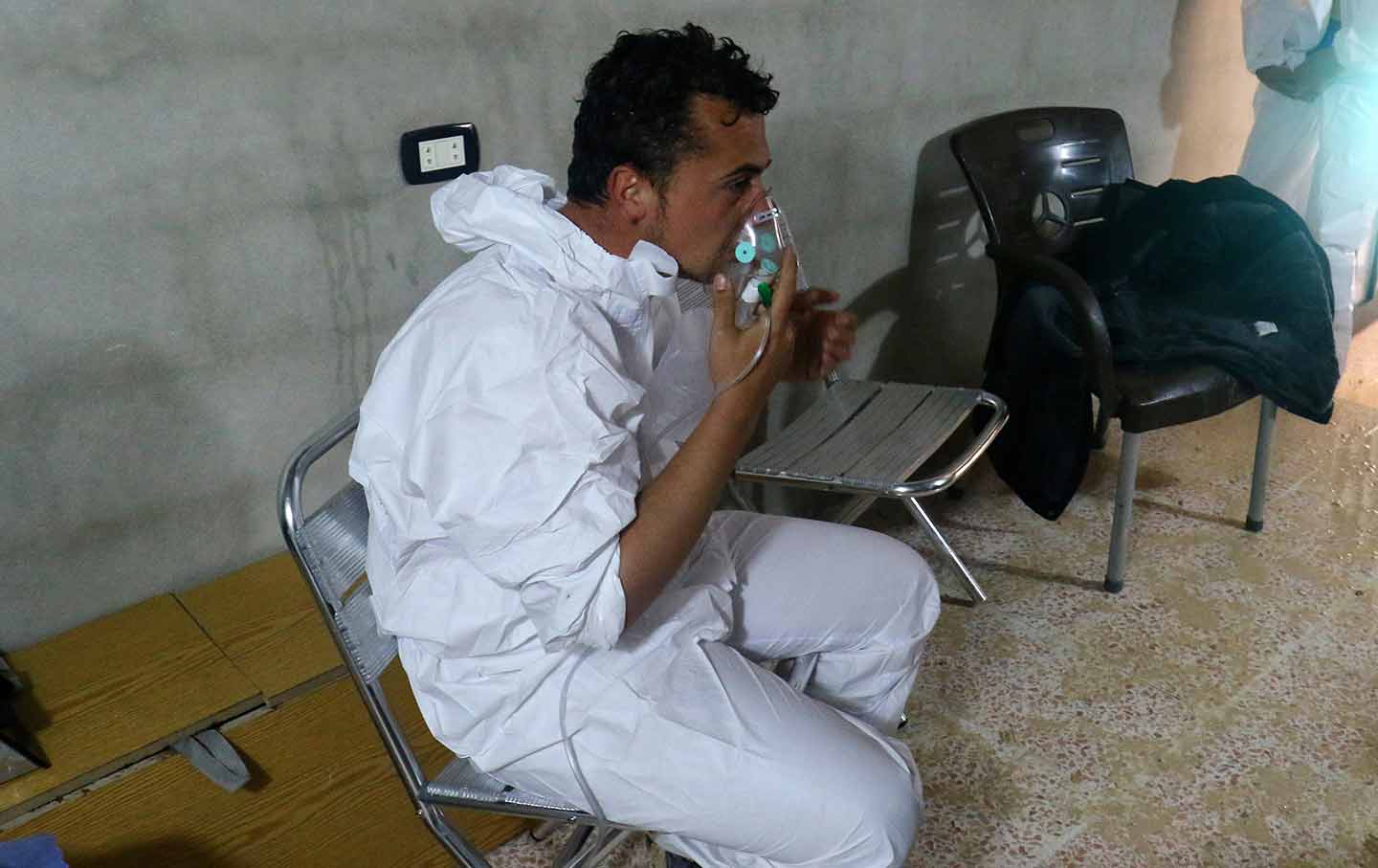 A man breathes through an oxygen mask after a suspected gas attack in the town of Khan Sheikhoun in Idlib, Syria, April 4, 2017. (Reuters / Ammar Abdullah)

When I saw footage of the alleged sarin-gas attack in Syria, I felt ill.

The whole episode, which killed up to 100 civilians in Syria’s Idlib province, was ghastly. But worst of all was the kids—glassy-eyed, discolored, and limp as their little bodies were carried away.

“That attack on children had a big impact on me,” he told reporters, condemning the Syrian regime’s “heinous” targeting of “innocent people” and “even beautiful little babies.” Then he fired 59 cruise missiles at the Syrian air base supposedly used to launch the chemical attack.

Even some of Trump’s critics applauded that move. But it was a huge flip-flop.

The Obama administration faced a similar crisis in 2013, following a much deadlier chemical attack on a Damascus suburb. Back then, Trump was unambiguously against intervening. “DO NOT ATTACK SYRIA,” the billionaire tweeted in all caps. “VERY BAD THINGS WILL HAPPEN!”

The Syrian War Is Creating a Generation of Traumatized Children

An informed change of perspective is a good thing—but only if it’s informed. Though it might’ve felt good to see the Syrian regime pay a price for its crimes, there’s no way a strike like this can ease civilian suffering.

For one thing, it was a pinprick. Within days, Syrian planes were taking off from the same base and bombing the very same town. But escalating the war risks provoking a devastating conflict with Russia or Iran, Syrian allies who could step up their support in response.

Even if that war succeeded in ousting the regime, the country would only plunge deeper into chaos—just as Iraq and Libya did after we ran their similarly horrible governments out. Islamist extremists would be well positioned to fill the void in Syria, too: Al Qaeda–linked forces currently hold Idlib, while ISIS controls much of the east.

Either way, it’s innocent people who pay the price. Just ask the families of the 1,700 civilians reportedly killed by US-led air strikes in Iraq and Syria last month alone. Many of those were children, too.

Air strikes, in short, are a recipe for humanitarian catastrophe. But that doesn’t mean there’s nothing the United States can do to help suffering Syrians. It’s just going to require another big flip-flop.

For starters, Trump should give up on his “Muslim ban.” Both versions of that order, now held up in the courts, would have indefinitely banned all migration from Syria—and suspended refugee resettlement from everywhere.

Trump’s said that’s necessary because Syrian refugees are “pouring in” and we don’t know “who they are.” But the US admitted just 18,000 Syrians from 2011 to 2016, all after years of vetting. (Syria’s tiny neighbor Lebanon, with a population less than metro DC, has taken over 1 million.)

During the campaign, it never bothered Trump that children might be affected by his anti-refugee policies. “I can look at their face and say you can’t come here,” he said about Syrian kids in February 2016. “They may be ISIS.”

That’s chilling. I hope Trump now understands there’s a direct line from that policy to the “beautiful little babies” murdered in Idlib.

Another welcome about-face would be to ramp up relief for those Syrians who remain. Trump’s “skinny budget” proposal nearly zeroes out humanitarian aid, but food and medicine are much cheaper than Tomahawk missiles, which run $1.4 million apiece. And they’ll save a lot more suffering Syrian kids.

Getting more deeply involved in Syria’s war is a grievous mistake. The silver lining is that it proves Trump can change his mind. Now that he cares about the fate of Syrian children, I hope he’ll open up our country—not bomb theirs.