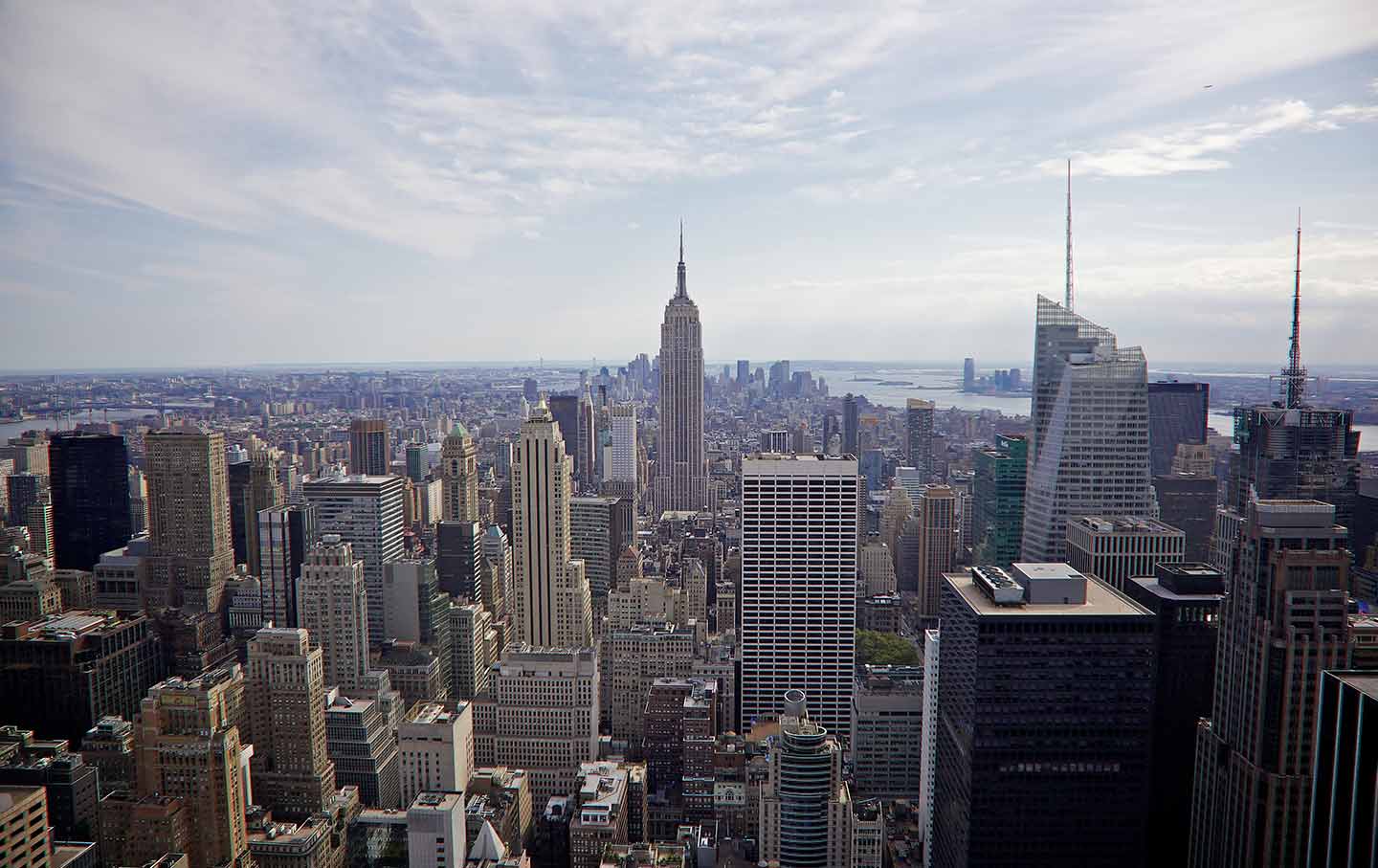 With this issue, The Nation has a new home. From our abode of 18 years on relatively bucolic Irving Place, a block east of Union Square, we’ve moved a mile north and three-quarters of a mile west, to Eighth Avenue just above 36th Street. Here on the 21st floor of a high-rise built in 1926, we not only have a marvelous view of the world as seen from Eighth Avenue—per Saul Steinberg’s famous New Yorker cover, we’re quite sure we can see straight across New Jersey to the Pacific—but also, facing south, of a good stretch of Manhattan and, in an imaginative sense, of our own history. For instance, there’s the stately James A. Farley Post Office Building, designed, like the original Penn Station that once stood across from it, by McKim, Mead & White—a firm we have a certain sentimental attachment to, given that Charles Follen McKim’s father, the abolitionist leader James Miller McKim, put up the seed money to start this magazine in 1865. And if we squint hard enough, we just might be able to make out the building at 130 Nassau Street, in the district south of City Hall known as Newspaper Row, where it all began some 151 years ago.

After rounding up enough support to launch the magazine, McKim père found The Nation space in the former headquarters of the American Freedmen’s Aid Union, a group dedicated to improving the lives of the formerly enslaved, for which he served as an officer. “No. 1 is afloat,” The Nation’s founding editor, E.L. Godkin, wrote after publication of the first issue on July 6, “and the tranquility which still reigns in this city, under the circumstances, I confess amazes me.” The office, one staffer recalled, reverberated with “the hearty laugh of Mr. Godkin.”

Following The Nation’s purchase by the New-York Evening Post in 1881, the magazine moved to the Post’s office building at 210 Broadway, just a few blocks away. In 1907, Oswald Garrison Villard, who inherited both publications from his railroad-magnate father, moved them into a gorgeous new building at 20 Vesey Street. Designed by the architect Robert Kohn, the 14-story building had an impressive façade, featuring sculptures of publishing and printing technology throughout the centuries—some of them carved by Gutzon Borglum, of Mount Rushmore fame. After helping to found the NAACP in 1909, Villard secured space in The Nation’s building for the group’s headquarters.

In 1918, the year Villard sold the Post and appointed himself editor of The Nation, two brilliant women came to work on Vesey Street. One was the future Nobel Prize winner Emily Greene Balch, founder of the Women’s International League for Peace and Freedom, known around the office, one historian writes, for “absently nibbling raisins as she read clippings” from the foreign press. The other, Freda Kirchwey, ended up staying at the magazine for 37 years, helming it for the last 18. “The lighting was poor and the walls grimy,” Kirchwey later wrote of The Nation’s offices. After giving birth to a son in 1919, Kirchwey left Vesey Street every day at noon and walked across the Brooklyn Bridge to her home on Montague Street in Brooklyn Heights to nurse the baby.

In 1953, The Nation finally broke out of Newspaper Row, moving into new quarters at 333 Sixth Avenue, a structure known as the “Little Flatiron Building” for its resemblance to the landmark skyscraper a mile uptown. It was an epicenter of independent publishing, containing the offices of New Directions, Pantheon, Monthly Review, and others. “The building was shabby,” Pantheon’s publisher, André Schiffrin, wrote in The Business of Books (1999), “and most of it was occupied by manufacturers, including the premises of an accordion maker and various garment firms.” Carey McWilliams took over from Kirchwey two years later. His office, Ralph Nader recalled in last year’s 150th-anniversary issue, “was regularly piled high with newspapers from all over the country.” In the 1960s, Village Voice journalist Jack Newfield often walked across Sixth Avenue to visit McWilliams at The Nation. Unlike at the Voice, where people were constantly “smoking dope and listening to the Rolling Stones,” entering The Nation “was like walking into the 1930s,” Newfield wrote in his memoir. It “felt like a relic.” Hunter S. Thompson sometimes dropped by to visit as well, six-pack invariably in tow.

In the early 1970s, when New York went to pot, 333 Sixth Avenue was no exception. McWilliams was brutally beaten and robbed in the elevator, and his secretary, on her first day at work, had her purse stolen right off her desk. “What a world,” McWilliams lamented, “what a crazy demented cruel world!” Going through his papers when he resigned three years later, he wrote in his diary that it was “painful to realize, suddenly, how much has happened, what great changes have taken place, how dead today certain issues and concerns. Did they ever really matter? Were they as important as they seemed?”

Victor Navasky became editor of The Nation in 1978, and a year later the magazine moved to 72 Fifth Avenue, at the corner of 13th Street. It was in this office that Nation staffers protested Navasky’s decision to publish David Levine’s cartoon of Henry Kissinger making aggressive love to a woman whose head was the globe, and it was outside this building—which also housed a clinic that performed abortions—­that an anti-abortion activist named Ramon used to show up every day. In 1987, Katha Pollitt wrote about her conversations with him. “More sins are committed here than anywhere else in the world,” Ramon said of New York. “Except for California.”

Evicted in favor of luxury co-ops, The Nation moved to Irving Place in 1998. Here, on September 11, 2001, the editors sat glued to the television in the conference room, watching the carnage unfold just a few miles downtown. A year later, Christopher Hitchens was in that same room, denouncing the staff’s meekness for refusing to join him in support of the invasion of Iraq. Then there were the notoriously lively holiday parties, a yule log consuming and renewing itself on the television, the martini station rather conveniently placed near the corner office.

Yet as the moneyed and the privileged began to rediscover the pleasures of urban living, the neighborhood around Union Square—once synonymous with left-wing radicalism—became transmogrified into Silicon Alley, and a near-doubling of the rent sent The Nation packing. Floor by floor, the building became the target of a hostile takeover by a “shared workspace” company, self-styled disrupters in flip-flops yapping into white headphones, creatively destroying all sense of peace in the elevators.

The New York Nation, as this journal was sometimes called in its early years, has always aspired to represent, and even to reconcile, the two different constituencies alluded to in that name: the colossal metropolis and the country at large. True to this founding mission, our most pressing concerns have always been national. Yet the magazine has also been firmly grounded in the city of its birth. From our crusade against Boss Tweed and Tammany Hall in the 1870s to our demand, in 1920, that the city seize empty houses and distribute them to the needy; from the 1959 publication of Fred J. Cook’s groundbreaking corruption investigation, “The Shame of New York,” to our influential endorsement of Bill de Blasio’s mayoral campaign three years ago, The Nation has taken an active role, as critic and, occasionally, as bit player, in the endlessly interesting drama of social and political life in New York. From our new conference room with a view, we look forward to continuing in that role, even as we struggle to find a decent independent bookstore in Midtown.