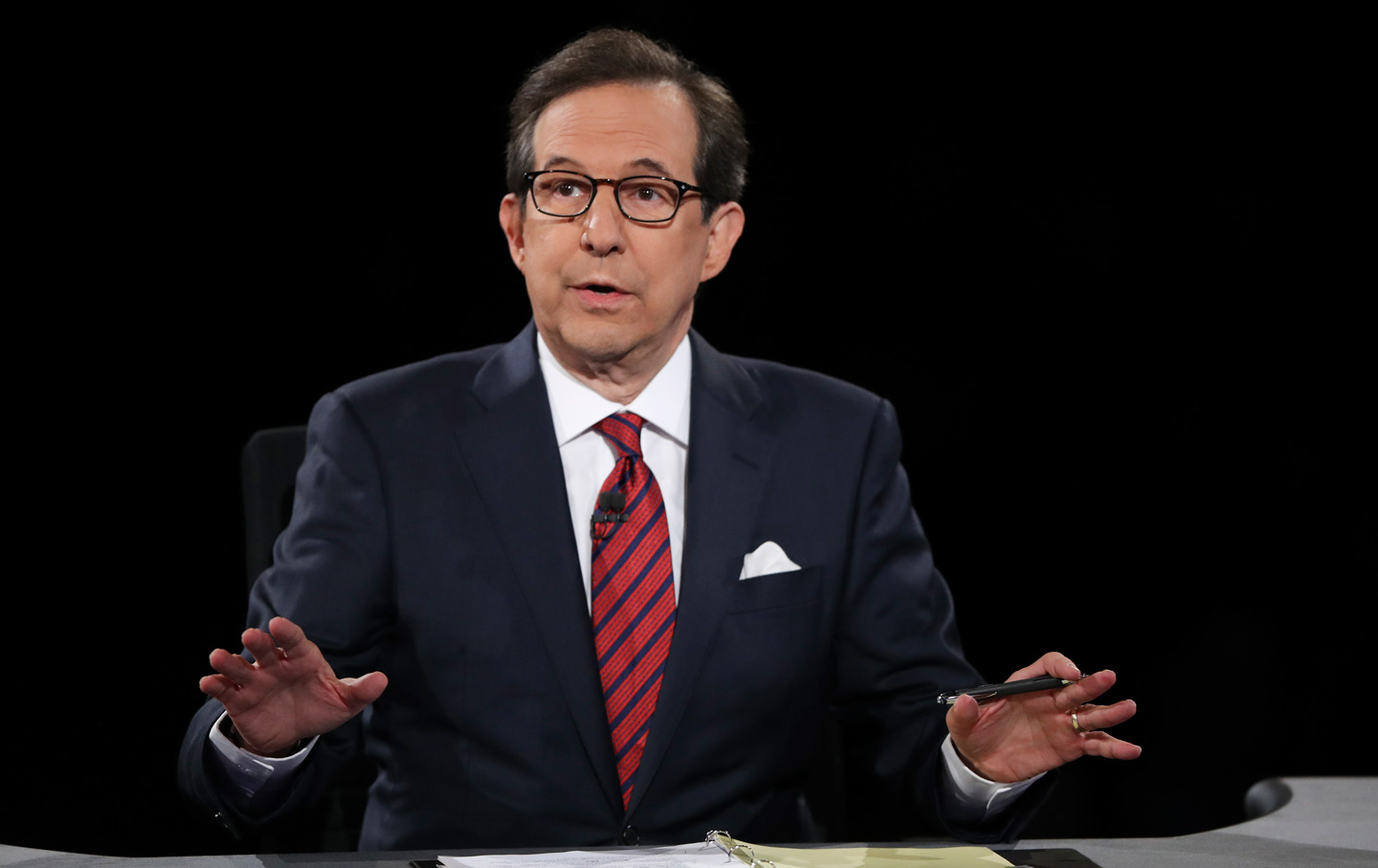 Donald Trump was not the only one making outrageous claims on the stage of the third presidential debate.1

Chris Wallace was a stylistically credible moderator. The Fox News host kept both Trump and Hillary Clinton on topic, more or less, and he even asked a couple of follow-up questions.2

But when it came to the austerity issues that have so clearly shaped the 2016 presidential race, Wallace got the substance all wrong; and, in so doing, he maintained the agonizingly low standards for economic discourse that have always characterized forums organized by the lamentable Commission on Presidential Debates.3

Wallace’s questions about economics and fiscal policy featured wrongheaded recitations of false premises that were every bit as absurd as the Republican nominee’s repetition of discredited claims about “rigged” elections.4

In the section of the debate that focused on the budget proposals of the candidates, Wallace took Hillary Clinton to task.5

“Chris Wallace is over his head.” —economist Dean Baker

“Secretary Clinton, I want to pursue your plan. Because in many ways it is similar to the Obama stimulus plan in 2009, which has led to the slowest GDP growth since 1949,” said the Fox News host. “You told me in July when we spoke that the problem is that president Obama didn’t get to do enough in what he was trying to do with this stimulus. So is your plan basically even more of the Obama stimulus?”6

The American Recovery and Reinvestment Act stimulus package was a response to a global financial meltdown that generated a scorching recession—the worst downturn since the Great Depression—which saw what CNN described as a “hemorrhaging of American jobs [that] accelerated at a record pace at the end of 2008, bringing the year’s total job losses to 2.6 million or the highest level in more than six decades.”9

Describing a tepid stimulus package that was constricted by Republican demands for tax cuts as the cause of slow growth is a little like describing low-dose aspirin as the cause of a headache. It does not work that way. The case can be made that the stimulus was an insufficient response to the crisis, but it did not create the crisis.10

Nobel Prize-winning economist Paul Krugman responded by the bizarre line of questioning by noting that Wallace’s claim that the stimulus “led to” slow growth was, at once, “editorializing” and “totally at odds with the evidence that the stimulus helped.”11

Krugman’s point is well taken. The University of Chicago’s Initiative on Global Markets found that overwhelming majorities of top economists said the stimulus was directly responsible for reducing unemployment and that it benefited the economy.12

CPD-managed debates keep the economic future of the great mass of Americans off the table.

The stimulus question was hardly the only example of what Krugman labeled “fiscal foolishness” coming from Wallace. The moderator asked a series of questions based on false premises about everything from Social Security and Medicare to debt-service payments. He concluded by repeating the “grand bargain” talking points of billionaire-funded austerity advocates who seek tax breaks for wealthy and “shared sacrifice” from everyone else.13

Noting that the Fox host’s line of questioning about debt issues extended from projections that have been proven to be “repeatedly wrong,” economist Dean Baker generously observed that “Chris Wallace is over his head.”14

It was shameful that, on these vital economic and fiscal-policy issues, the questions that framed the final debate amplified absurd arguments for austerity policies that fail everyone but those associated with what Bernie Sanders describes as “the billionaire class.”15

But that’s nothing new. The Commission on Presidential Debates has since 1988 policed the national discourse on behalf of status-quo economics in particular—and status-quo thinking in general.16

The CPD organizes debates that invariably confirm and extend the conventional wisdom of inside-the-Beltway politicians, pundits and corporate lobbyists—even when the “wisdom” is wrong. Third-party presidential candidates who have qualified for enough state ballots to be elected are excluded by “insurmountable-hurdle” polling requirements and the questions are equally exclusive. In fact, as campaigns turn more and more on issues of personality rather than issues of society, the questions have gotten worse.17

Even when questions appear to be substantive, they are often based on partisan talking points and the “concerns” generated by the billionaire-funded campaigns that seek to get everyone talking about their latest austerity schemes.18

The old League of Women Voters debates were more focused, serious and accurate in their questioning. They were structurally sounder and fairer. That does not mean that they were perfect. But it was better before the CPD—a narrowly defined private project of former chairs of the two major parties—grabbed the mantle in the late 1980s.19

The CPD does not take seriously the responsibility it has claimed for itself. Nor do the moderators of debates that can always find time to repurpose the fiscal foolishness of economic elites but that could not in the year 2016 manage to ask about looming threats to the planet. As Politico noted Thursday morning, in the most sadly predictable headline of the campaign, “Climate change snubbed again at presidential debate.”20

That’s hardly the only issue that did not make the cut in four nationally televised debates that filled hours of air time this fall. Issues of concern to rural America got scant attention. The same went for the digital revolution and the automation of our economy. And for questions about how democracy might be renewed and extended in the 21st century so that it is more truly representative. And, or course, there was no debate about whether a media system that is obsessed with clicks, ratings, and dwindling ad revenues can even begin to provide Americans with the information and the insight that is necessary to be their own governors.21

For the most part, the future was off the table.22

And so was a sensible discussion of economic and fiscal issues.23

That’s the problem. What we should recognize after three decades of CPD-managed debates is that the economic future of the great mass of Americans is always off the table. That’s a big part of the reason a status-quo politics that almost everyone recognizes to be broken remains in place—propped up by big money, big media, and a commission created by two old parties to guard against better.24