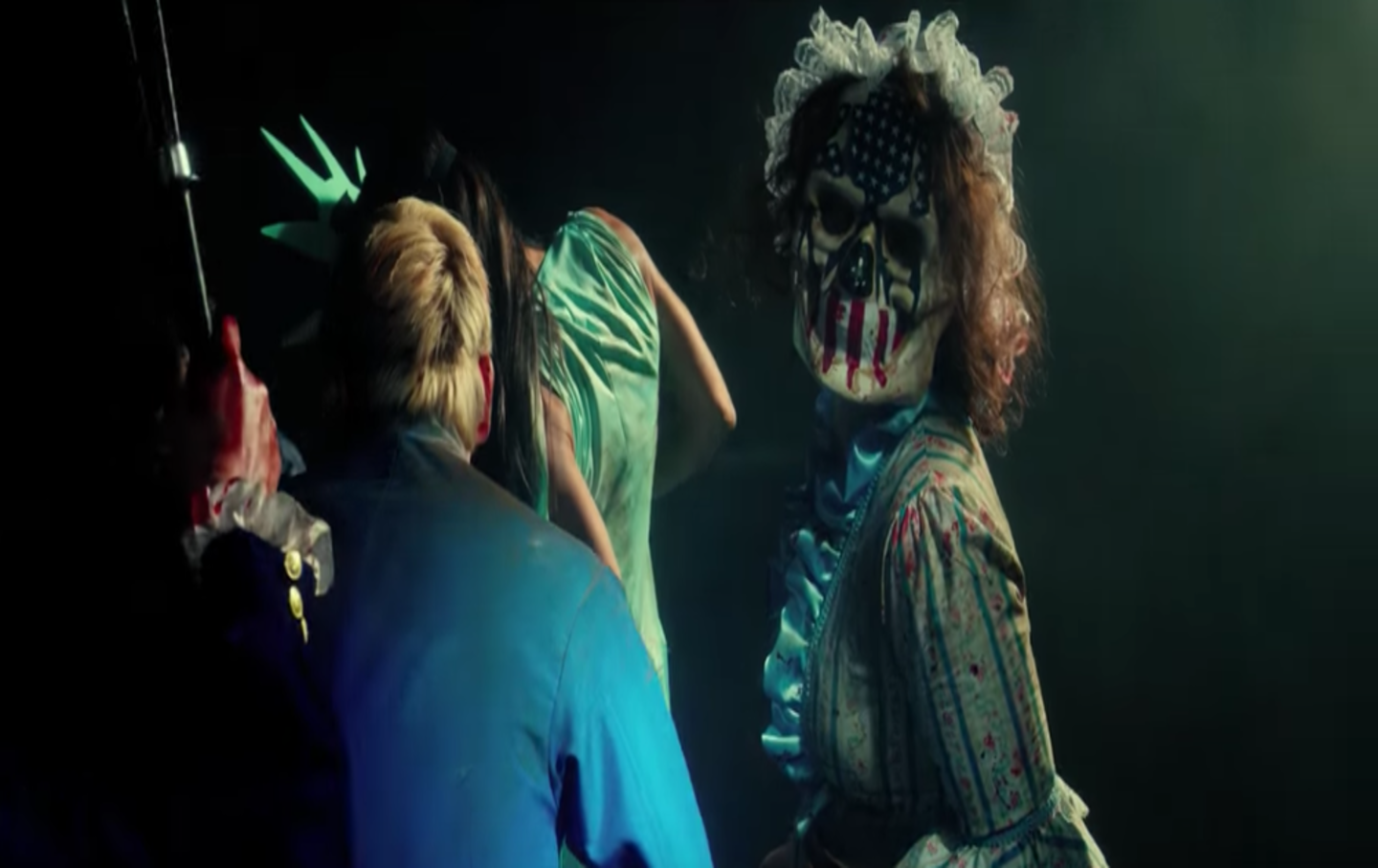 A masked terrorist participates in Purge Night, an annual 12-hour period where all crime is legal. (YouTube)

The conceit of the Purge series of films directed by James DeMonaco is an annual nightlong dispensation to do whatever you want, pretty much, instituted by the “New Founding Fathers” after economic collapse. The third, and most recent installment largely forsakes individual violence and survive-till-dawn drama. Instead, it turns toward national allegory so crude it is barely allegory at all. Subtitle: Election Year. But it is not so simple as it first appears.

The NFF candidate is a condensation of the party’s neo-fascist core values: purity, violent xenophobia, and money power. Their political attunement is a bit out of focus, in part because a guillotine sequence associates their purity mantra with Robespierre and the Jacobins of the French Revolution, but you get the picture. The progressive opposition is running a white lady whose entire platform seems to be “end the Purge.” It’s a dead heat as Purge Night begins. Consequently, the long-ruling NFF have removed the constraint protecting politicians. It’s open season on White Lady, and they mean to purge her from life itself. This dimension of the allegory is pretty clear: Election 2016.

Here things get a bit squiggly. While references to “class warfare” and “inequality” abound, the society we see is divided entirely by race (barring a few tokens). The dispossessed, the working poor, even the small shopkeepers, are all black, with the exception of one Mexican immigrant. The oligarchs, political class, and their bodyguards are all white. Moreover, the NFF employ a white-power paramilitary; you can tell because they wear paramilitary uniforms labeled white power. These swastika-spangled charmers spend Purge night in an escalating battle with a well-organized and provisioned black militia. This dimension is also clear enough. We could just call it Race War, though as a more immediate matter, it is evidently a specter summoned by the strength and persistence of Black Lives Matter.

However, it is not clear how a revolutionary Black Lives Matter movement conjured by the film comports with Election 2016. It tries to smooth this over by staging matters such that the black militia et al. take it upon themselves to become White Lady’s personal army, arranging her protection and rescue as needed. In return, she generously educates them in the wisdom that, should they pursue violent emancipation, “you will be no different from them.” In the swift denouement, they abandon race war to assure a fair election: White Lady wins decisively, and the Purge is abolished (and perhaps racialized inequality along with it).

In some regard this registers Hillary Clinton’s famous black popularity in the primaries. It also imagines that rising racial antagonism can be channeled into familiar electoral politics. Let’s call this third or synthetic allegory, Black Panthers For Hillary. It is not a very satisfying turn, cinematically. My companion, a person of color and scarcely a fire-breathing revolutionist, noted, “It seemed like they could have just decided to fight and won; I don’t get why they listened to her.” Others will wonder much the same.

As a sidebar, it is worth noting that the liberal catechism (“you will be no different from them”) explains the admixture of right and left radicalism assigned the NFF. Bitterly divisive party politics is fine, as long as we all recall that the real distinction is between those who uphold the legal order and those who would overthrow it. These malefactors right and left are all the same: violent extremists, terrorists, whatever. The implication that this moral faith has historically safeguarded liberal democracy against, say, the rise of fascism is of course simply false; it is precisely what has allowed for it.

Despite the electoral triumph, the film ends ominously (sequels!) with intimations of riot and social unrest against the new progressive order. White fightback? Ultrawealth in reaction? And it is here we descend to the submerged allegory that the surface only intimates in inverted form. We might say it asks the same question posed by Obama’s 2008 candidacy or, more immediately, this year’s congeries of so-called socialists and fascists. What sort of dramatization is necessary to draw even the skeptics, the disaffected, the brutalized, and the hopeless back into the stagnant waters of campaigns, seasonal promises, and elections? What can once more bind people to the side of order, to the liberal compact that works less and less, for fewer and fewer?

Behind this question is the finally obvious underlying fact on which the film is founded: not the majesty of elections but their collapsing legitimacy. This has patiently become a central political issue of our age. Keyed perhaps to the farce of Bush-Gore 2000, legitimacy now unravels across the West. It is in Sanders adherents’ strident fixation on voter fraud, in the threat that Trump’s primary victory will be circumvented at the convention in Cleveland. It is in the ruling Syriza party’s callow refusal to honor the Greek referendum against EU austerity in 2015, and in the plethora of suggestions (exactly by liberal voters!) that last month’s Brexit vote be ignored, overturned, redone.

That is to say, it is not just splayed across the map but across the political spectrum. As spectacularly as Republicans and Democrats, Tories and Labourites, endeavor to present their differences as the real war, each day it seeps more into the popular consciousness that the war is elsewhere. We could say it is between races, or classes, or remind ourselves of Stuart Hall’s dictum that “race…is the modality in which class is lived.” Or, more plausibly, we could say that the war is between those who gain from a purportedly pacific liberalism, and those for whom the Purge has been long ongoing, for whom such smug moralism can no longer disguise the horrors of the long night. Their day is coming.