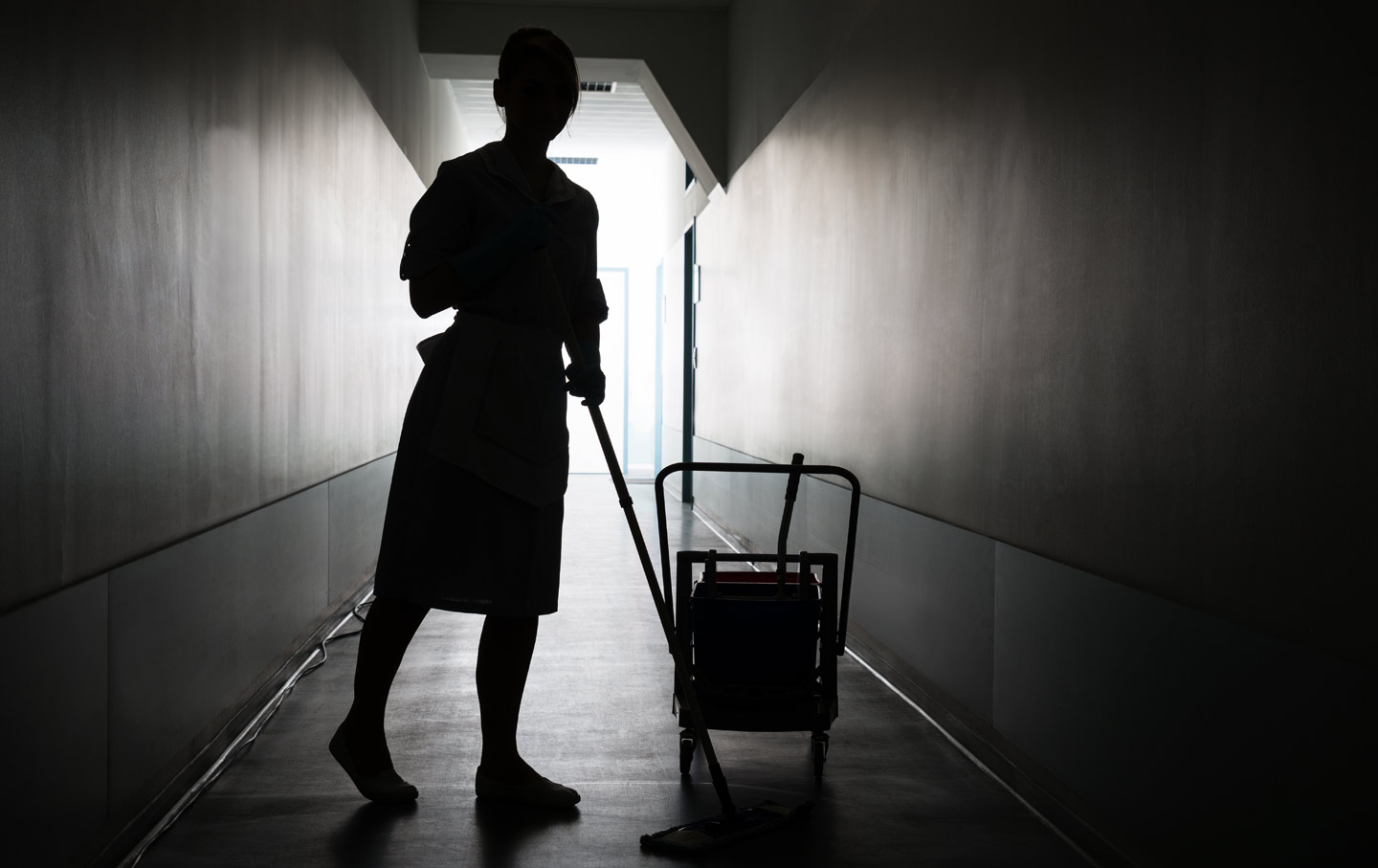 At a major chain hotel in Orlando, where tourists are always stopping through to enjoy the town’s glitzy theme parks and resorts, many workers are just stopping through as well. They are distinguishable by their light-blue uniforms—different from the regular staff’s logoed shirts—by their Jamaican accents, and by the fact that come summer, when other staff might be looking forward to paid vacation, or maybe a raise, these “guestworkers” will be sent home, having exhausted their work visas.

One afternoon, as the workers ate lunch together in the small staff cafeteria, I visited with some union staffers doing routine member outreach and noticed an awkwardness hanging in the air. Though UNITE HERE represents staff housekeepers, organizers can only chat informally with the outside contractors. These workers are reluctant to discuss much about their working conditions. However, a young woman says she gets solid training with help from other “far more advanced” housekeepers and is “comfortable” working this way as a means of supporting her family. But the work is strictly temporary: six- to nine-month stints, arranged under a staffing company, through an agency that specializes in processing H-2B visas (a temporary migrant-labor program for various service industries) to fill hotel jobs during “peak seasons.”

Limited hiring of agency workers is allowed by the union contract. But these “guestworkers” earn $9.85 per hour, according to Labor Department records (with deductions for housing), and clean about 16 rooms a day, like the regular housekeepers. Their unionized coworkers earn on average $11.19 an hour under UNITE HERE’s collective bargaining agreement.

In one corner, the housekeeping shop steward, a gregarious middle-aged Haitian American, banters warmly with both union and agency workers, but remarks quietly that since the subcontracted workers are not unionized, the hotel “can use them like nothing.” UNITE HERE can’t advocate for them if there’s a conflict with management, as they do for regular staff. The steward understands why they come to work, but also why the hotel chooses to hire through an agency instead of adding regular staff: The hotel “could use some people here [in the United States], but they don’t.”

The lunchroom scene reflects a new status quo in the hospitality industry: Convoluted staffing arrangements such as guestworker visas are the product of the rise of outsourcing, subcontracting, and quasi-employment models that have sliced, diced, and confused the workforce as bosses grow increasingly distant from the people working under them.

But the notoriously shady subcontracting system may become less fluid under the Department of Labor’s (DOL) new policy guidance on rules for “joint employment.”

The DOL guidance aims to clarify federal regulations on workplaces using multiple contractors or staffing firms. The criteria regulators will consider include whether the parent company controls key employment decisions or is directing or supervising workers. The new regulations focus on whether their work is essentially controlled by the bosses whose burgers they serve or whose hotel rooms they scrub, even when their paycheck says something different. DOL is basically catching up with the atomization of production chains in global manufacturing, logistics, and service jobs, including Amazon warehouses and Walmart shrimp-processing plants. The mother of all quasi-bosses, McDonald’s, considers itself to be merely a franchise, but is now being charged at the National Labor Relations Board (NLRB) as a joint employer, since franchisees all essentially operate uniform workplaces under the Golden Arches brand, from Reykjavik to Rio.

In a case study cited in DOL’s policy analysis, DirecTV and an installation subcontractor was charged with jointly violating wage-and-hour laws by paying workers on a piece-rate basis, leading to subminimum wages. Regulators determined they were essentially operating as DirecTV staff under a “vertical” joint-employment arrangement, since they wore the uniform and worked under conditions DirecTV determined.

The “guestworkers” earn $9.85 per hour. Their unionized coworkers earn on average $11.19 an hour.

Business groups like the International Franchise Association criticize the policies as overly restrictive and annoyingly complex. To labor advocates, what’s complex and oppressive is the laissez-faire world of subcontracting, where bosses put workers at risk of wage theft and legal manipulation through a gauntlet of contracting and immigration loopholes.

The rules could have implications for the growing immigrant labor force, especially low-wage guestworkers used by companies such as Walmart, which was scandalized a few years ago when a subcontracted seafood processor was charged with exploiting Latino guestworkers under squalid, abusive conditions.

Following the release of the new guidance, National Guestworker Alliance Executive Director Saket Soni announced, “When employers can evade liability for abuse by claiming they’re not the ‘real’ employer, wages and conditions fall for all workers.” But more realistic regulations focused on day-to-day working conditions will allow immigrant workers to “fight for better workplaces for themselves and those alongside them.”

The rules could discourage companies from limiting regular staff and hiring “cheap” extra workers through outside contractors—especially when union representation is at stake. In a recent groundbreaking NLRB case, the recycling firm Browning-Ferris was deemed a joint employer along with its labor contractor, and the more marginal contract workers were then able to join the regular staff’s union. If employers can no longer exploit subcontracting loopholes, perhaps many subcontracted workers might finally have a clear path to organizing.

Ashwini Sukthankar, director with UNITE HERE’s Global Campaigns Department, says that in a typical case of subcontracted hospitality guestworkers, the staffing agency may have to “comply with the same room quotas that are set by the hotel itself, and obviously the issue of…quality control that happens. They are very clearly under the direction of the hotel in very key ways. I don’t think it would be a stretch at all to try to apply the joint employer standards.”

At the Orlando hotel, though, guestworkers’ jobs last less than a year. Besides, they are thinking about remittance checks, not arcane joint-employment regulations—although they embody the subcontracting experience every day, working alongside unionized coworkers. As she finishes her brief break, a young Jamaican woman declares confidently that she gets the job done “properly and efficient” with the other staff: “Everybody’s doing the same thing. It’s no different.” When asked whether everybody gets the same pay, though, she admits, “We don’t know their wages.”

Sitting shoulder-to-shoulder with union workers, separated only by a uniform and a hard-fought union contract, the agency housekeepers represent a new workforce, pointedly one step removed from the labor movement. Only in occasional shared smiles in the cafeteria does it become clear how these “guestworkers” are part of the same workforce as their union sisters. So if their job is “no different,” then perhaps their rights at work shouldn’t be, either.