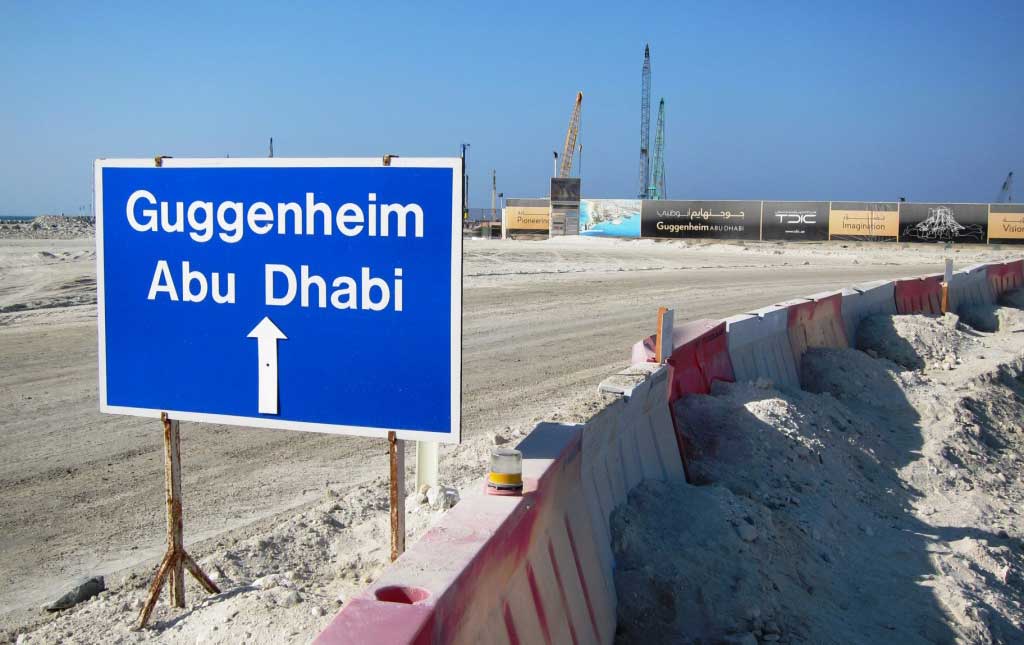 Abu Dhabi, the glittering capital of the United Arab Emirates, is ascending to the pinnacle of soft power over the Persian Gulf. The city’s luxury resort, Saadiyat Island (Happiness Island), will, when fully built, serve as a regional arts hub featuring world-class branches of the Louvre, the British Museum, and the Guggenheim. But the nascent cultural oasis is also a notoriously brutal place to work for the site’s legions of migrant workers.

The cultural-activist collective known as the Gulf Labor Coalition (GLC) has for years years worked to expose the dirty underbelly of the Emirati construction boom. As a result of its pressure, it has been in negotiations with the Guggenheim leadership about safety and worker conditions at the Saadiyat construction site since 2010. But now Guggenheim leaders have broken off negotiations with the group as the museum moves into the construction of its new outpost.

The “unilateral” breaking of ties follows several years of spectacular protests, including banner drops and civil disobedience at the main Guggenheim branch in Manhattan, agit-prop installations at the Venice Biennale, and extensive field research on shady labor practices in the UAE’s massive and highly exploitative migrant guestworker system. But now, the grassroots network of artists, filmmakers, and intellectuals have been cut off from talks with the museum authorities aimed at promoting fair labor standards on the site.

A public letter, issued by Guggenheim Museum and Foundation Director Richard Armstrong, signals that the impasse was sparked by tensions over the GLC’s militant pressure tactics. Armstrong accused the GLC of not reciprocating the museum’s cooperative efforts, saying its supposedly antagonistic protests have been “unfair, convenient for publicity purposes, and distract[ed] from sincere efforts to address an issue to which [the project’s development authority Tourism Development & Investment Company (TDIC)] and the Guggenheim have dedicated significant energy and resources with measureable progress.” Moreover, in its discussions on labor reforms, Armstrong argued, “Gulf Labor continues to shift its demands on the Guggenheim beyond the reach of our influence as an arts institution while continuing to spread mistruths about the project and our role in it.”

The definition of the Guggenheim’s role, however, is at the heart of the labor debate surrounding Saadiyat Island. Paralleling the demands of international human-rights campaigns, the GLC’s agenda specifically targets the prestigious cultural institutions involved with UAE’s mega-development to hold them responsible for the systemic labor violations pervading the migrant-labor system in Gulf States. Although a contractor for the Guggenheim has reportedly not yet been selected for the construction by the TDIC, a recent labor auditing report by PricewaterhouseCoopers indicates that while the TDIC has promised reforms for several years, Saadiyat’s construction labor practices remain severely under-regulated and corrupt: Most of the construction workers surveyed—mostly imported from India and Pakistan on highly restrictive visas—had paid exploitative fees to labor recruiters, fees which are supposed to be prohibited; there were frequent delays and inaccuracies in payments; and the vast majority were reportedly unaware of their rights to raise workplace grievances. Labor and safety violations have been a major issue across the region, particularly in flashy development projects, from a luxurious New York University satellite campus on Saadiyat and the controversial World Cup Stadium in Qatar.

As the Guggenheim grapples with the UAE’s indentured labor system, it has long supported the TDIC’s ethics code governing migrants’ labor standards. But politically, the Museum has chafed at the GLC’s style: “The direct meetings in which we have been engaged have become no longer productive,” says Guggenheim spokesperson Tina Vaz. While the museum remains open to communicating periodically about the project’s progress to the GLC, “we see parallel paths of advocacy. We are an arts institution; they are an activist group.”

Labor and safety violations have been a major issue across the Gulf Region.

The GLC insists, however, that their activism is exactly what the institution needs. Following a series of recent meetings with Guggenheim Board Members, the group tried to arrange regular summit-level meetings that would include several human-rights and labor groups partnering with the GLC’s campaign. Since 2014, the GLC says it had been urging the Museum and TDIC to negotiate with allied rights organizations, including Human Rights Watch, International Labor Organization, and earlier this year, International Trade Union Confederation and Building and Woodworkers’ International union. But despite their continual efforts to engage those stakeholders—along with a good-faith protest moratorium the GLC undertook in anticipation of further talks—the GLC states, “Guggenheim did not respond positively to any of these invitations.”

Now the waiting game has become a standoff.

“I think the Guggenheim was at a point when they really couldn’t put us off any longer, especially since we brought all the NGOs on board,” says GLC organizer and NYU professor Andrew Ross. “And we suspect they were just in a corner at this point and had no alternative but to take this step.” According to Ross—whose stalwart campaigning has routinely led to clashes with authorities at NYU, the Guggenheim, and the UAE—the museum’s attitude is disappointing, but should not distract from the GLC’s other accomplishments.

Ross tells The Nation, “Coming off of six years of efforts that we’ve made, all the research we’ve done…all of this free labor that we’ve put into trying to [help Guggenheim] set a precedent for a big project that will provide decent, fair labor conditions for workers in the Gulf—that’s been our goal all along. And the foot dragging and the procrastination…has all been on the other side.”

In its statement responding to the Guggenheim’s move, GLC warns that the museum is “avoiding the more relevant facts on the ground: the bodies, lives, and dreams of thousands of workers who are accumulating massive recruitment debts, being cheated on wages, exploited by corrupt contractors and subcontractors, denied any meaningful collective representation, and forced to live out of sight and under watch.”

Since the protest moratorium has ceased, however, GLC’s direct-action wing GULF is now able to pursue full-fledged demonstrations. Another upshot of this conflict is that the disputes between activists and the museum might now fade back, and, with the battle lines redrawn, the spotlight can shift toward the real stakeholders: the workers who have never been invited to the negotiating table. In light of their struggle for dignity on Happiness Island, the activists in New York have hardly been silenced in the debate; they just have a clearer sense now of which side their voice is on.