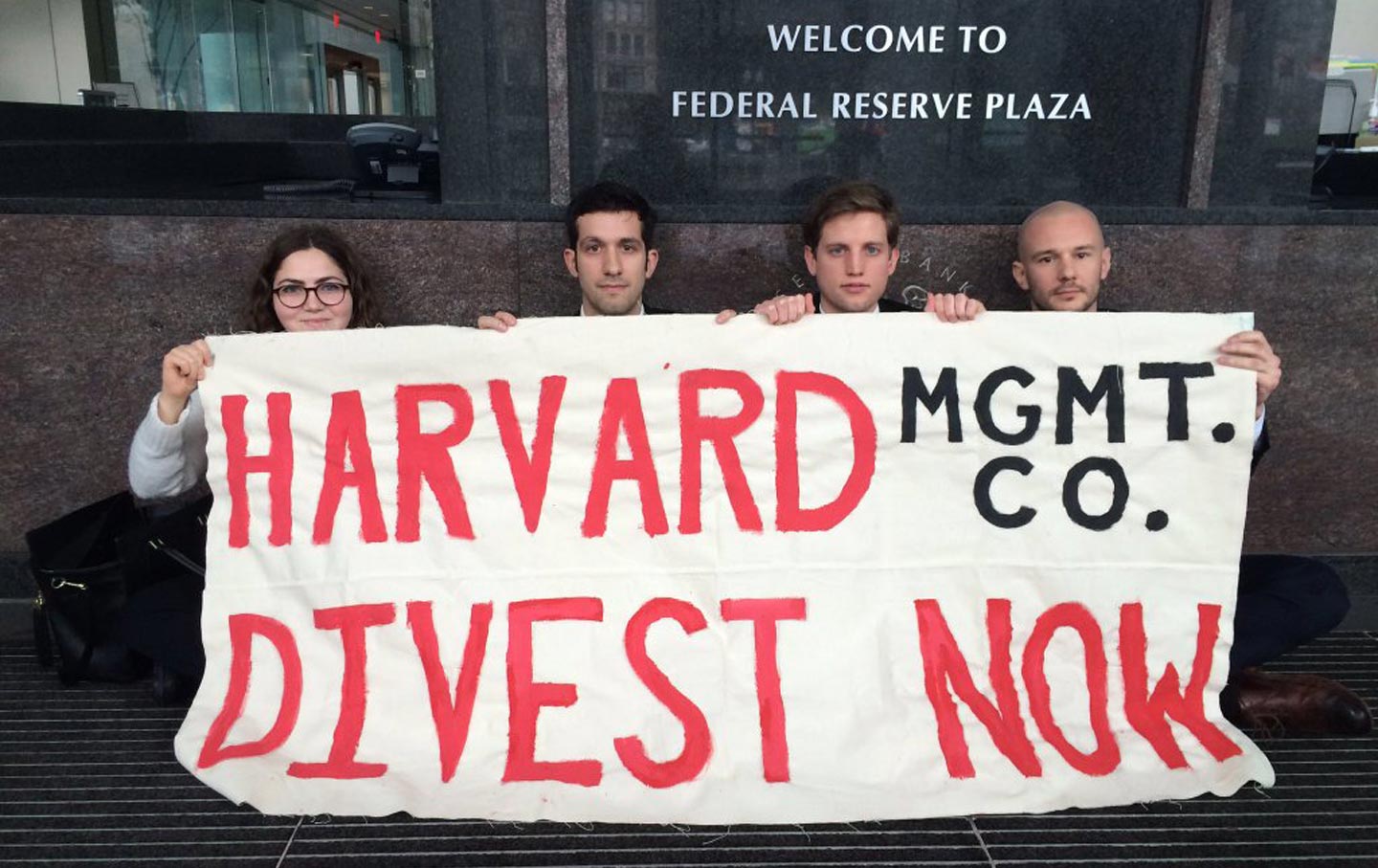 At 11 pm on a cold Wednesday in February 2014, bleary-eyed Divest Harvard members gathered to discuss the campaign’s future. The group, which calls on Harvard to divest its 37.6 billion dollar endowment from fossil-fuel companies, was deeply torn. We had worked tirelessly for 18 months to build a campus movement, helping mobilize 72 percent of college students in support of divestment, organizing rallies, and hosting forums. Still, after multiple meetings with our administration, there was no progress toward divestment. Some in our group wanted to “shake,” continuing dialogue with the administration in the hope that our voices could spark its conscience. Others wanted to bypass Harvard to try to “make” a new reality. They argued for escalation—blockades, sit-ins, and increasing forms of civil disobedience. Shake or make? That was the question.

The future of the fossil-fuel divestment movement today mirrors the dilemmas that Divest Harvard faced that frigid night. The movement oscillates between two paths forward. “Shake” aims to reorient existing institutions towards a climate consciousness. “Make” tries to confront, transcend and transform existing systems on the premise that only new structures can save us.

The shakers and makers of fossil-fuel divestment define its future. How are these distinct strategies playing out? I talked with youth leaders across the divestment movement to find out.

Fossil-fuel divestment organizing earned the title “historic” within three years of its inception. The first campaigns bubbled up on a few campuses in 2010. Led initially by Swarthmore students, divestment stood in solidarity with those on the front lines of fossil-fuel extraction. In July 2012, Bill McKibben wrote a now-famous article in Rolling Stone that showcased fossil-fuel divestment as a primary strategy for confronting climate change. Three months later, 350.org staged the “Do the Math” tour. Almost immediately, more than 100 campus campaigns emerged.

In October 2013, a report from Oxford University declared fossil-fuel divestment the fastest-growing divestment campaign in history. Now there are more than 400 campus and hundreds of off-campus campaigns. Over 500 institutions with more than $3.4 trillion in assets have divested. Hundreds of students have risked arrest. HSBC, the World Bank, and other major financial institutions have endorsed the economic rationale behind divestment. Even politicians—like Bernie Sanders and Martin O’Malley—now reject fossil-fuel money.

Fossil-fuel divestment has become one of the principal ways that youth engage with the climate movement. The movement aims to weaken the fossil-fuel sector’s influence in three ways: (1) pivot capital towards clean energy investments, (2) stigmatize the industry to create political support for climate action, and (3) ignite a massive social movement to fight the fossil-fuel industry. “It’s really mobilizing young people and making them feel like they do have a voice,” emphasizes Daphne Chang, a founding force behind Mt. Holyoke’s divestment campaign. The movement provides an inclusive platform for action.

Young people see another key goal of divestment: to hold institutions accountable in the age of climate crisis. Young Jong Cho, a campaigner for 350.org and 350 action says, “The divestment campaign and movement is more about highlighting the influence of the fossil-fuel industry on many of our institutions…[and] pushing our institutions to take a moral stance on climate change.” The climate crisis requires educational institutions to rethink how they operate and whether their practices threaten communities and jeopardize students’ futures.

Last spring, students organized the first nationwide coordinated escalation and activism surged. Since then, the movement has been in a “valley,” as Shea Riester, a young college alum who supports student activists, observes. “Generally, though,” he added, “you have valleys happen after spring escalations.… I think we’re going to see another round of escalation this spring…continuing some of this momentum.”

And he was right.

This spring so far, more than 40 divestment advocates have been arrested during campus protests. Four Divest Harvard students were arrested after a sit-in. Dozens of UMass students were arrested during an occupation. Yale announced partial divestment. The University of Mary Washington divested. The surge of student activity revived fossil-fuel divestment on campuses and reminded the world that student power is alive and well.

But the future of fossil-fuel divestment is defined by the tension between shake and make. This tension has existed since the movement’s inception, though it has not always been directly acknowledged. On the one hand, divestment is a financial tool of “the system.” The movement “shakes” things up within the current system by showcasing the total numbers of assets that have been divested, celebrating large pools of money that forswear fossil fuels, and highlighting financial experts’ support. At the same time, the movement uses divestment to confront the system and “make” a new reality. The divestment movement tackles the fossil-fuel industry, redirects capital towards new economies, and builds a mass movement working for climate justice.

Some campus campaigns accept divestment as a tool of traditional finance and aim to shake endowments into financial instruments that support a transition away from fossil fuels. These students build relationships with trustees to explore green investment opportunities. They encourage support for investments in climate solutions. These campaigns can be used to “facilitate incremental steps” or to look for “moments where interim compromises may exist, like a commitment to invest in local community development,” suggests Ophir Bruck, a former leader of Fossil Free University of California who now works in the sustainable investment field. For campus shakers, divestment is a way to change the conversations within administrations and reallocate endowments’ investments toward a livable planet.

In the finance world, shakers aim to use the existing economic system to rechannel capital towards investments in carbon-free technologies and capabilities. Lily Tomson, a student organizer with Positive Investment Cambridge, describes divestment as “genuinely trying to shift the financial territory.” Fossil fuel divestment adheres to its literal definition: a financial mechanism to move capital from one set of assets to another.

Campus makers, in contrast, see divestment as a tool to radicalize students against the fossil-fuel industry and any institution that colludes with its practices. They regard divestment as demanding more than just a shift in investment strategies. They aim to birth a new ethos of confrontation in the face of corruption and crisis. Riester sums it up: “We’ve seen how many hundreds of students have been at the table…and how little that has gotten them.” Instead, he says, students need to commit to nonviolent civil disobedience, “putting it all on the line” and not being afraid to “demand divestment in that direct way.” Divestment becomes a symbol for what young people are willing to do for all that they love. The end goal may not be whether a school divests or not. Power is built from struggle.

This view holds that divestment can be used to disrupt the economic system and build a new economy. Katie Hoffman, who co-founded the University of California’s divestment campaign, told me, “Finance for finance sake is one of the greatest challenges we’re up against in our society right now.” Iliana Salazar-Dodge, a senior divestment campaigner at Columbia University, paints a vision of this new system in a recent op-ed: “Worker-owned businesses and local funds are springing up across the nation…. They are building something beautiful.” Divestment and reinvestment can not only accelerate the clean-energy revolution, they can also be the building blocks of a new economy.

Shake and make contradict each other in many ways, but these two approaches also allow for broad engagement. Will divestment be able to succeed on both terms? Or will the different aims produce internal divisions that pit one activist against another and jeopardize the ability to build power? Can shake and make coexist? It’s an age-old tension between radicalism and reform made more urgent by the existential threat of climate change.

I have argued in the pages of The Nation that fossil-fuel divestment is a step towards true political prowess for the climate movement. Divestment stigmatizes the fossil-fuel industry, limits its political influence, and creates new political space for real climate solutions. To fulfill this theory of change, the divestment movement must actually claim that new political space. It needs to pivot its networks and engage with electoral politics.

Divestment can be an opportunity to make a new kind of politics. It’s time to “look beyond the divestment movement,” says Becca Rast, a US Campus Organizer with 350.org. “That includes young people running for office.” As many interviewees argued, divestment organizing trains a new generation of politicians. Campus activists learn the tools of politics immemorial: how to negotiate, organize, and engage in collective decision-making. When these millennials run for office, they will infuse new perspectives, capabilities, and values into our political system.

The shakers know what they are for: the shake modifies endowments, shifts the finance sector, bird-dogs politicians. But can the agents of destruction be shaken quickly enough to become agents of salvation?

The makers know exactly what they are against, but their solutions are still developing. They use direct action to confront and expose the status quo but still face the work of creating fresh solutions and new systems. This work takes time, effort, and creativity at a moment in history when we race against physics. Can the makers become a regenerative force in time?

After a winter snow, I watch the branches of Maine’s pine trees bend under the weight. I shake the branches and watch the limbs bounce back to their proud height. I feel satisfied to have released them from their burden. There are times, though, when the branch cannot snap back. It’s too damaged to withstand the next storm, and the trunk itself is compromised. No matter how much I shake, its life is over. A new tree will one day take its place and, in time, a new forest will grow.