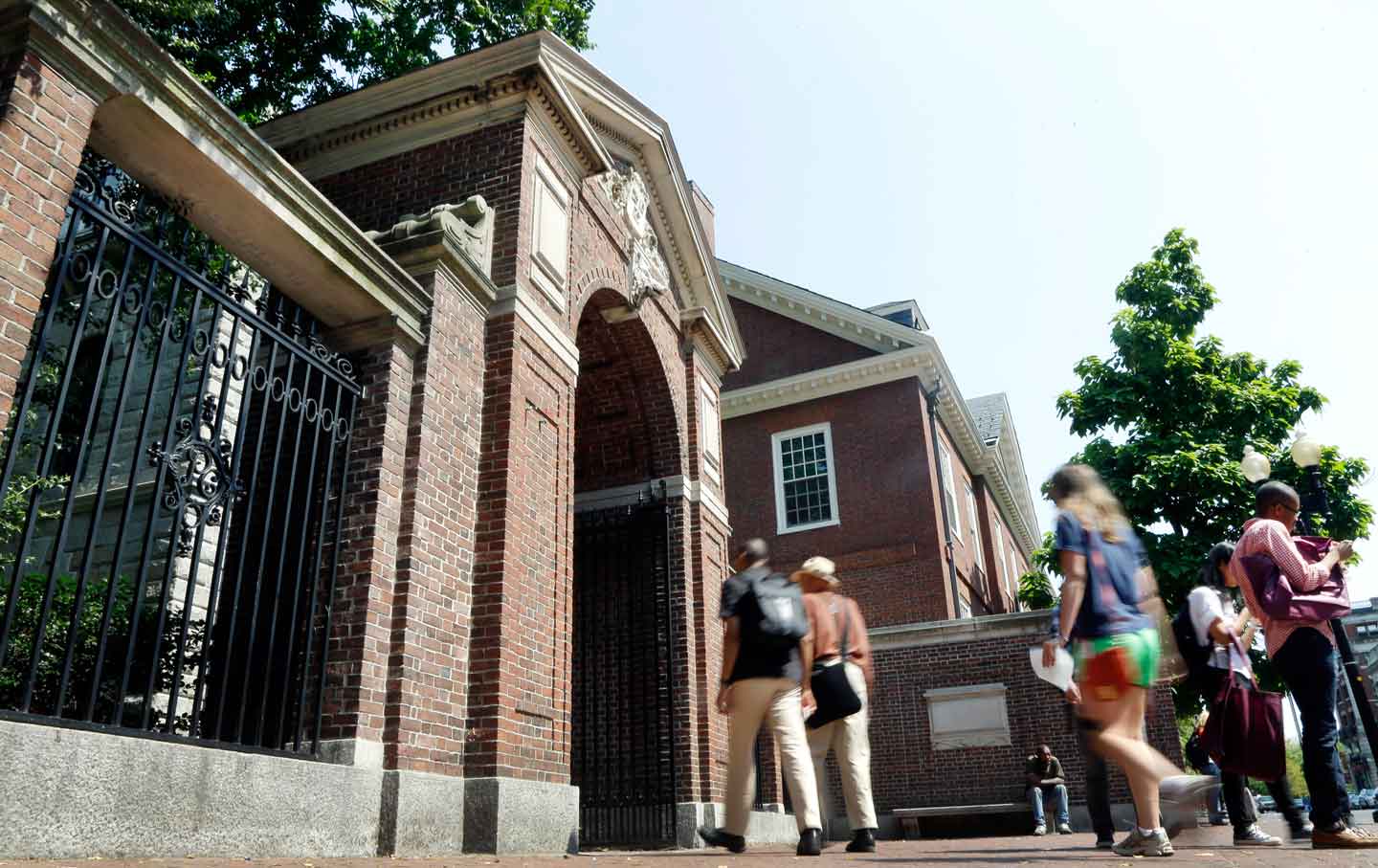 Between classes at Harvard, the lunch line traces the class line dividing the country’s most elite campus. A dining hall staffer could serve the university president lunch for about 35 years and on the current wage scale, still earn less than his boss’s 2014 annual salary. And while Harvard thinks the demand for a yearly minimum wage of $35,000 is too indulgent, students pay over twice that much to the school to attend classes and live on campus.

So that’s why both workers and students ditched the lunch line for the picket line lasts week in the first Harvard campus strike in over 30 years, transforming the polished Oxonian dining halls into a crucible of intersecting social struggles.

On the first day of the strike, Harvard Yard brimmed with subversive school spirit, chanting about Harvard showing “your greedy side.” Clerical and janitorial workers joined the red-T-shirted strikers on the picket line during off hours in solidarity. Students joined the workers’ marches across campus, alongside local workers from off-campus union workplaces. As undergraduate Wesley Cash told The Harvard Crimson, although he missed seeing friendly staffers during mealtimes, he acknowledged, “They’re not getting paid, they’re not working, they’re not enjoying benefits, and they need to feed their families.”

After the strike launched last Wednesday, a Harvard spokesperson stated the university was “disappointed that they have been more interested in planning a strike than working on a solution that meets the needs of their members and the wider community.” Workers are disappointed that the richest university in the country seems more interested in fattening its $35 billion endowment than sustaining a living wage for its poorest workers.

“They feel that we as Harvard employees should be grateful to have a job…that [the rise in health care costs is] happening to everyone,” says Kecia Pugh, a General Service worker at Annenberg Dining Hall. As a single mother, she says she would pay several thousand more annually under the administration’s proposal. The plan would especially burden part-time coworkers who only work seven months out of the academic year. “And what they’re saying is that this is the best they can do?…Working at the wealthiest university in the world, with a $35 billion endowment they got,” she says, for the workers, “they want to nickel and dime our health care.”

According to an analysis by Harvard Medical students, under the administration’s proposal premiums could reach roughly $233 per month, compared to a zero premium under the Affordable Care Act in Massachusetts—a costlier plan than what many uninsured, non-union workers in the state enjoy.

Workers, however, think their union contract should provide more. Their contracts mark a last line of defense against a university-wide cost-cutting trend that has already shaved down benefits for nonunion professional employees.

In addition to protecting their health benefits, workers seek an annual minimum wage of $35,000 with year-round jobs—roughly meeting a baseline for a decent livelihood in Massachusetts, which ranks sixth nationwide in income inequality. UNITE HERE organizer Tiffany Ten Eyck says the proposed wage floor shifts the conversation on wages toward household economic stability, not just hourly pay. “It is completely unfair to callously talk about these hourly wages…at the same time that they’re also making these concessionary demands on health care,” she says. Because the academic schedule leaves many part-timers struggling through long bouts of joblessness each year, she says, “getting more wage increases is not going to actually deal with people’s everyday problems here.”

With the picketing stretching into week two, Ten Eyck says that across Harvard’s community, “the feeling of the strike has been that we have everyone but the administration on our side.” Though some students grumbled about inconveniences of limited menu options and dining halls run by a management-led skeleton staff, many have donated to strikers and used their swipe cards to stage a “dine-in” outside to share with them.

On the other hand, students too feel the weight of Harvard’s inequality. Over the past year students of color have protested the institution’s glaring lack of socioeconomic diversity and its failure to think critically about its history of segregation. The faculty, too, is cleft between an increasingly scarce tenured professoriate on top, and the much-lower-paid academic precariat, including graduate-student instructors, who are themselves fighting for a union.

The dining-hall staff represent an increasingly rare sliver of the “real world” on campus—many of them are immigrants and people of color who commute from far away because they can’t afford Cambridge rents.

Or as the Harvard Crimson Editorial Board argued in an editorial supporting the strikers, “On a campus where members of the faculty and administration often do not reflect student diversity, students of color may feel more comfortable relating to the HUDS staff.”

The labor dispute reflects a new normal in higher education. According to a sector analysis by the Delta Project, at both private nonprofit schools and public schools, frontline workforces have shrunk dramatically, while professional and executive staff have swelled. However, “the proportion of spending dedicated to compensation remained steady across most types of institutions” since 2002, so benefits alone aren’t consuming the budget.

Though Harvard’s endowment is astronomical, the strike resonates deeply with growing labor tumult on other campuses that are facing far more dire financial straits than Harvard, with many forced to slash budgets, cut back on courses and services, and cut staff and faculty positions since the recession, while tuitions and student debt loads swell.

Over the past year, service workers as well as faculty have protested over wages and labor conditions at various public and private campuses: Unionized faculty at City University of New York and California State have threatened to strike, and both union and non-union academic and campus staff workers have rallied—with support from student activists—against threatened mass layoffs and benefit cuts at University of Pittsburgh and University of Tennessee. And while Columbia graduate-student teachers and researchers campaign for union representation, Columbia’s Student-Worker Solidarity coalition protested for a $15 minimum wage for all workers on campus, students as well as staff.

While Harvard remains the bastion of the country’s future elites, the political climate galvanized by the strike suggests the students would rather stand on the picket line with the workers they live and eat with every day than with their school’s “greedy side.”