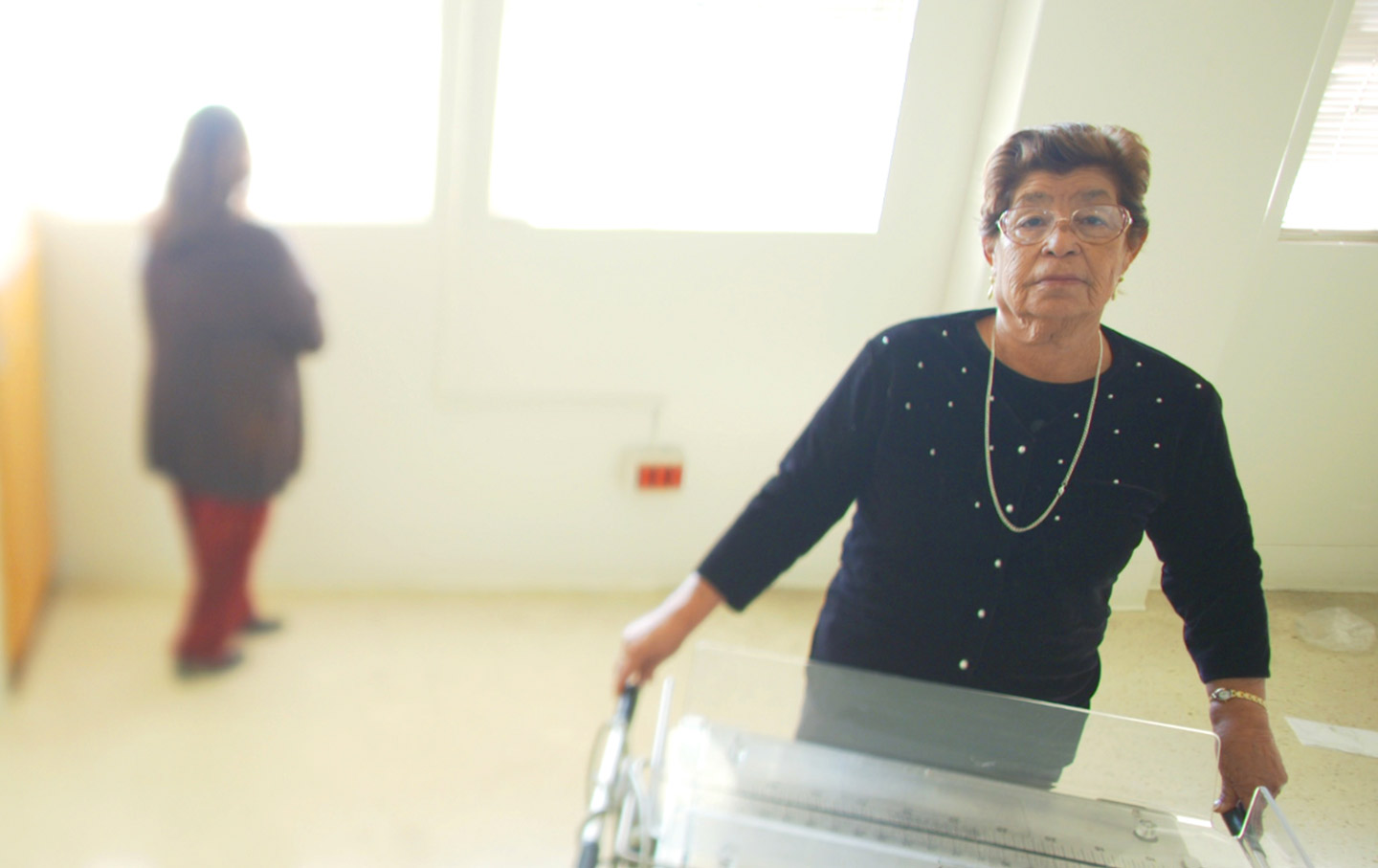 Maria Hurtado, who was sterilized without consent, revisits the hospital. (Courtesy of No Más Bebés / Claudio Rocha)

On Monday night, the documentary No Más Bebés premiered on PBS (it’s streaming free online until mid-February). The film tells the little-known history of Mexican immigrant women who were sterilized without their informed consent while giving birth at Los Angeles County hospital in the late 1960s and early 1970s. Many spoke no or limited English and were asked while in labor or in the frantic moments before emergency C-sections to sign documents agreeing to have their tubes tied, thus ensuring that this birth would be their last. (For a reflection on the film by the journalist who broke the original story in 1975, read Claudia Dreifus’s January 27 article, “A Group of Mexican Immigrant Women Were Sterilized Without Their Consent. Can a New Film Bring Justice?”)

One woman recalls a nurse grabbing her hand and forcing a scrawled signature on the page. A medical resident training at the hospital at the time recalls seeing a colleague hold a syringe filled with pain meds in front of a suffering woman’s face: “You want this shot? Sign.” The women often did not know until years later that they’d been sterilized. Many were in the dark until approached by attorneys who, armed with hospital records provided by a whistle-blower, urged the women to join a class-action suit charging that the hospital had violated their civil rights.

The film weaves together interviews with the women and their families, doctors involved in the tubal ligations, and the attorneys, advocates, and academics who contributed to the class-action suit, Madgrigal v. Quilligan, which was heard in federal court and decided in 1978. In a display of victim blaming at its finest, the judge presiding over the case zeroed in on the testimony of a UCLA anthropologist who had interviewed the women and found them to be deeply traumatized as a result of the forced sterilizations. These women had placed a high value on childbearing, and many had emigrated from rural areas where large families were the norm. But instead of eliciting empathy, this context was used against the plaintiffs. “The cultural background of these particular women has contributed to the problem,” the judge wrote in his ruling.

A Group of Mexican Immigrant Women Were Sterilized Without Their Consent. Can a New Film Bring Justice?

Despite the blow of a legal loss, the case yielded some positive results in the form of regulatory change. There would be no remedy for the affected women, but the federal government would provide consent forms in English and Spanish. The state would make bilingual counselors available at county hospitals. And now, nearly 40 years later, the film itself is proving to be another type of victory for the women, their families and those who advocated on their behalf. The film uncovers this hidden history, and provides today’s reproductive justice advocates with a tool that helps explain what their work is and why it matters.

Staffers of the organization California Latinas for Reproductive Justice have participated in half a dozen screenings across the state in the past year, including on college campuses, at the California Endowment, and at a conference for promotores, people who work in Latino communities to connect individuals with heathcare and social services. Laura Jimenez, CLRJ’s executive director, said that because these sterilizations occurred so recently, the film is quite personal for many who’ve watched. “We’re talking to people who are from the surrounding neighborhoods, or their parents or grandparents were raised in that area [served by LA County hospital]. So then they start asking themselves, ‘Could this have been my family?’” Jimenez added that in every screening in which she’s participated, someone has said that either they or someone they know has been asked while in labor if they would like a tubal ligation at the time of the birth. In the film, Dr. Bernard Rosenfeld, the whistle-blower who decades ago shared what he was seeing at LA County hospital with attorneys and activists, says no doctor at a private hospital would do such a thing.

No Más Bebés has also given advocates a way to draw connections between population control efforts then and now, and to enables reproductive-justice organizers to show how crucial their perspective is for real reproductive freedom. Last summer, CLRJ hosted a screening for legislative staff in Sacramento. A recent investigative report found that doctors were performing sterilizations in California’s women’s prisons without prisoners’ informed consent as recently as 2010. Other state policies deserve to be viewed through the lens of this history as well, said Susy Chávez Herrera, CLRJ’s communications manager.

The organization has been involved in the years-long fight to repeal the state’s maximum family grant, which caps the number of people in a family who can receive cash benefits through the state’s welfare program. Helping people who are generally fired up about preserving reproductive rights see why efforts to limit poor women’s fertility should be of equal concern isn’t easy, Chávez Herrera said. “You can be in the liberal camp or you can be a feminist but just not see the connection between [the history outlined in the film and] the policies that we pass when it comes to poor women of color,” she said.

Across the country in Pittsburgh, La’Tasha D. Mayes is planning to screen the film later this month as part of the annual Women of Color HERstory Month events produced by the organization she directs. That group, New Voices for Reproductive Justice, primarily serves black women and girls in Pittsburgh, Philadelphia, and Cleveland. Mayes says issues the film raises are relevant in the communities she works. “It’s so clear that reproductive oppression is based on race, class, and gender,” Mayes said. “The specific experiences might be different, but the underlying root cause is all the same.”

Mayes points to a moment in the film when advocate Gloria Molina of Comisión Femenil, a Chicana empowerment organization, recalls that she and fellow activists during the period of the lawsuit created their own demands and mobilized around them. “We wanted to create a waiting period for sterilization. Why? Because we wanted to make sure everyone had truly informed consent,” Molina says in the film. “This was totally offensive to white feminists. The feminists wanted sterilization upon demand. They basically opposed our waiting period. They weren’t really taking into account that if you’re Spanish speaking or if you don’t speak English how you were being denied a right totally.”

Mayes said this segment of the film spoke to her, given that while her organization works to preserve access to abortion and contraception, she also finds herself in the presence of women who want to know, as Mayes said, “How do I parent the children that I do have? What kind of birth am I going to have? How will my children be treated?”

“The same things we’re fighting for today were fought for in the generation that preceded us,” Mayes said of the film and the discussions it’s kicked off in her circles. “But they didn’t have a reproductive-justice movement, and I think that’s what will make a difference for our generation.”