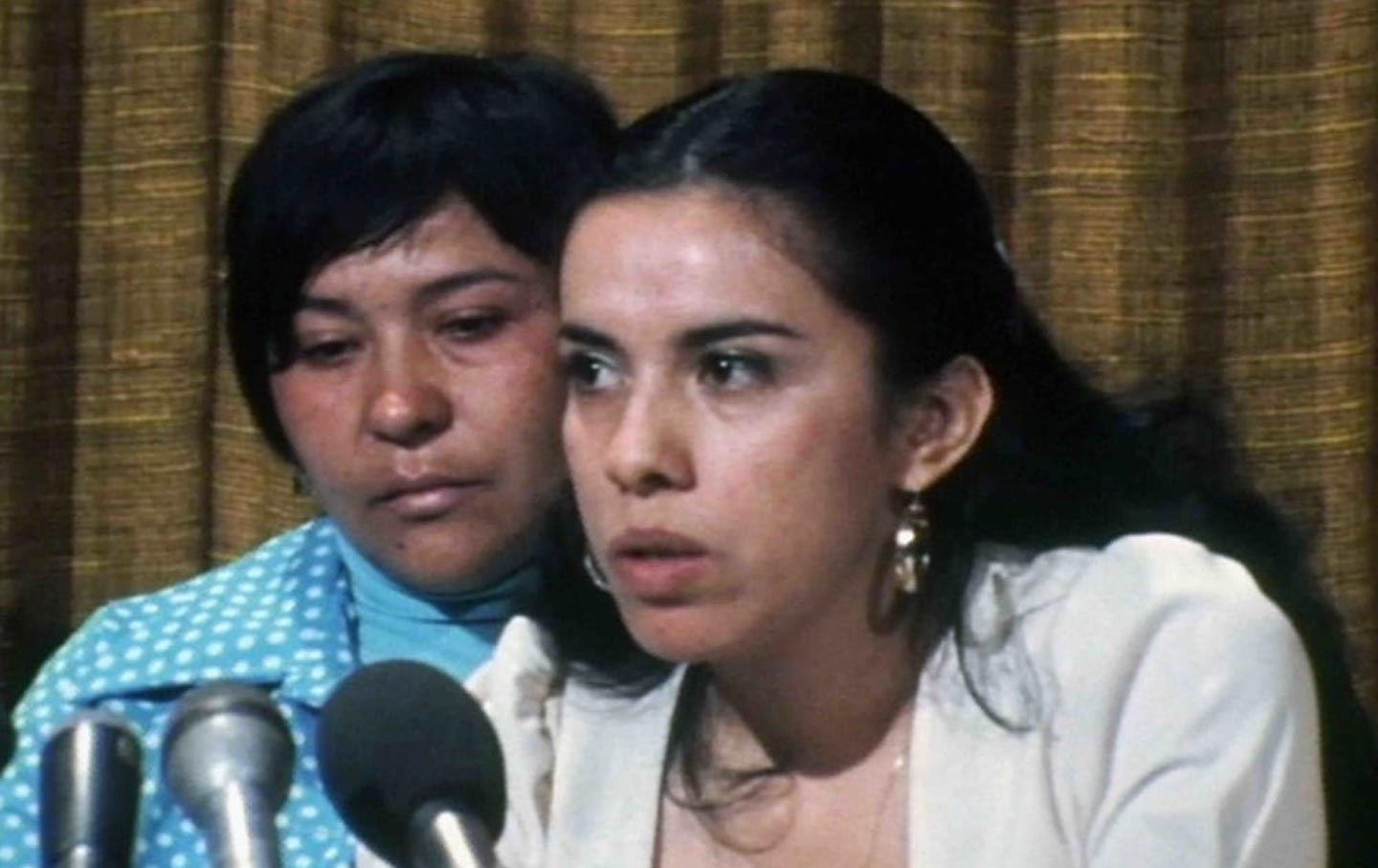 Madrigal and Hernandez at a press conference. (NBC Universal Archives)

Can a film create a semblance of justice when the legal system failed?

That’s the question I kept asking myself while watching director Renee Tajima-Peña’s No Más Bebés, which in English means, “no more babies.” The documentary will be broadcast on PBS’s “Independent Lens” series on February 1st. Full disclosure: I appear briefly in in the film. But more about that later.

No Más Bebés focuses on Madrigal v. Quilligan, a 1970s civil-rights lawsuit in which 10 poor and working-class Mexican-American women sued one of the most powerful institutions in their city, the Los Angeles County–University of Southern California Medical Center. In their complaint, the women charged that the hospital and its doctors had sterilized them without their informed consent—and, in some instances, even without their knowledge.

Many of the plaintiffs were first approached for tubal ligations—the surgical procedure that effectively sterilizes women by tying, blocking or cutting their fallopian tubes—while in the throes of labor or suffering through the frightening uncertainties of an emergency birth. Some claimed they had been pressured at that vulnerable moment into signing consents. Others said they’d refused the tubal ligation, but were sterilized anyway. Several reported learning of the procedure when they requested contraception after giving birth and were told it would be unnecessary.

“The doctor said, ‘Don’t cry. It’s best for you not to have any more children,’” one of the plaintiffs said in a 1975 interview. “‘In Mexico, the people are very, very poor and its best that you not have more children.”’

I remember that comment well, because I was the reporter doing the interview. Yes, I covered the beginnings of the Madrigal case.

In the summer of 1975, with an assignment from The Progressive and a small grant from the Fund for Investigative Journalism, I went to Los Angeles. I first learned of the suit after seeing a report on coercive sterilization published by Ralph Nader’s Health Research Group. For much of that summer, I dashed around the city, meeting the women and learning their stories. I didn’t speak Spanish and I didn’t drive a car. Somehow, I managed.

At the time I remember thinking that these women were like rape victims; a physical part of their being had been stolen from them.

“My nerves and my head are in great pain,” Guadalupe Acosta told me. She’d been sterilized after giving birth to a child who died in the hospital and had no recollection of consenting to a tubal ligation. “Ever since the operation, I am very inattentive. Not forgetful, inattentive. People sometimes have to tell me things twice…. I’m not there.”

The suit was heard in 1978. Federal Judge Jesse Curtis Jr. ruled for the hospital. Despite the negative verdict, the suit still had enormous impact. It put women’s issues onto the agenda of Los Angeles’s increasingly active Mexican-American civil-rights community. And it pushed the federal government into enforcing its own regulations against sterilization abuse. To this day, Madrigal is studied in Latino history classes.

As for me, like many a journalist, once the story was over, I went on. Life goes on. Work goes on.

Then, about three years ago, a camera crew arrived at my New York City door. Virginia Espino, a UCLA historian was producing, with the Oscar-nominated director Renee Tajima-Peña (Who Killed Vincent Chin?), a film on Madrigal.  They are neighbors and close friends.

Professor Espino and I talked on camera for a full morning. I gave her whatever leads and documentation I still had.  She didn’t need much. Espino had done her doctoral thesis on the lawsuit and she it knew it inside and out. Moreover, with the exception of those who had disappeared or those who’d subsequently died, she’d located all the plaintiffs.

Though it came as little surprise, the involuntary sterilizations were devastating. My rape-victim analogy proved sadly true. In the course of her searching, Espino uncovered destroyed marriages, breakdowns, depression. One woman had tried to kill herself.

Guadalupe Acosta, who’d been at the center of my report, died in 2003. Hers had been a life of misfortune, made worse by the sterilization. Acosta’s first child, born out of wedlock in Mexico, was taken from her. The baby she delivered at LA County, her fourth, was born without a brain and died. Once her common-law husband learned of the tubal ligation, he abandoned her and their two surviving children.

For Espino, 53, almost a generation younger than the plaintiffs, the struggle to tell this particular story was personal. “I grew up in the neighborhood in the shadow of that hospital,” she explained to me. “When I learned of the case I was shocked, speechless. I wondered why people my age hadn’t heard about it.”

Yet, as Espino did her research, she discovered something besides horror in Madrigal—graceful defiance. “In our community,” she told me, “we often get stories of women as victims.  These women fought back. They took substantial risks to be part of the lawsuit, go public with the sterilizations and privately to confront their traditional relationships. Many didn’t want to tell their families what had happened. They couldn’t go to relatives for support. Just finding a safe place for the kids to stay when they went to court was a challenge.”

I remember thinking that these women were like rape victims; a physical part of their being had been stolen from them.

And yet they did it—and, despite stories that were often tragic, frequently managed to reconstruct lives. Consuelo Hermosillo, only 23 when she was sterilized, became a highly successful chef. Her son, Oscar, owns five restaurants in the Los Angeles area.

Astonishingly, Oscar Hermosillo first learned of his mother’s sterilization after reading about the case in a college Latino-studies class. She’d never breathed a word to him. “Hey Mom, didn’t you give birth at Los Angeles County Medical Center?” he inquired.

Early last spring, an invitation arrived. Would I attend the world premiere of No Más Bebés at the Los Angeles Film Festival? Some of the surviving women would be there, as would other principals in the case. Now, I’m someone who skipped my 50th high school reunion. But this, I couldn’t miss.

In addition to the women, I wanted, very much, to catch up with Antonia Hernandez, the lead attorney on the suit. In 1975, she was a 27-year old Legal Aid lawyer, barely out of law school. I was also curious about the fate of Dr. Bernard “Buddy” Rosenfeld, the youthful resident who saw troubling things while on duty in the LA County maternity ward. It was Buddy who began collecting patient records, hundreds of them, and it was he who brought them to the attention of lawyers and reporters. Even in those pre-HIPPA times, such an activity was a likely career-killer.

Perhaps the most compelling reason to make the trip was to applaud the accomplishment of Renee Tajima-Peña and Virginia Espino. Tajima-Peña, it seems, knew exactly how to take this tangled narrative and weave it into something artful. The film is gripping because the director allowed the women to tell their story themselves. There’s no honey-voiced narrator off in the darkness, defining their experiences for them.

By some miracle, Tajima-Peña got permission to film some of the surviving women in the abandoned shell of a building that once housed LA County Medical Center. For the viewer, the effect is dramatic. “I’m not one to show a lot of sweetness or tenderness. Or pain,” plaintiff Maria Hurtado, explains as she examines the ghostly remnants of the hospital’s maternity ward.  “…inside I feel pain, remembering.”

Pain appeared to be replaced by muted celebration when I arrived at the Regal Cinemas in downtown Los Angeles on a warm day this past June for the premiere.

In the gilded lobby of the movie theatre stood three of the plaintiffs: Consuelo Hermissilo, Maria Figueroa, and Maria Hurtado. They were surrounded by relatives, reporters and film students throwing questions and statements at them. “You’re a hero,” one of the students gushed to a beaming Maria Hurtado. “You stood up for yourself and everyone. Thank you.”

Consuelo Hermosillo, ran over to the Antonia Hernandez. “Antonia, I’ve followed your career,” she announced.

“These are women of color who went to court and said what was right.” —Emmerson Orozco, granddaughter of plaintiff Helena Orozco

We all had. In the years since the lawsuit, Hernandez had become a major figure within the Mexican-American community. She was, for many years, the head of the Mexican American Legal Defense and Education Fund, or MALDEF. Today, she heads one of the largest philanthropies on the West Coast, the California Community Foundation.

Buddy Rosenfeld quietly watched the excitement from a corner of the Regal Cinema’s ornate lobby. He’s now a gynecologist in Texas. His specialty? Reversing tubal ligations. Rosenfeld and his wife, Lou Diamond, also run an abortion clinic in Houston. “I’ve still got the ACLU on my speed dial,” he smiled and then added, “I’m still involved in reproductive rights.  It’s the same thing.”

Had the movie created a kind of justice?

Maria Hurtado, one of the “stars” of the film, thought so: “I feel that I am now understood,” Hurtado told me through Espino. She added, “We lost the case but we won the legal changes that required consent forms in Spanish.”

Emmersen Orozco, 13, the granddaughter of plaintiff Helena Orozco, found a thread of strength in the movie, too. This young woman never met her grandmother, who died before her birth. However, the film, which included footage of Helena Orozco “gave me a sense of my grandmother. These are women of color who went to court and said what was right. My grandmother was focused on the future and making sure this wouldn’t happen again. The movie gave me that.”

And the movie gave me something too. At the premiere, one of the plaintiff’s walked over to Antonia Hernandez and asked, in Spanish, who I was. “Periodista, periodista,” she replied.

“Si, periodista—journalist,” I enthused as this woman squeezed my hand.

That squeeze was a confirmation. We live right now in a moment when everything about my profession, including its future, is up in the air. Well, 40 years ago I did something that touched this woman—I listened to her story and found a way to tell it. No Más Bebés does more: It finishes her story and proves how much journalism can matter.