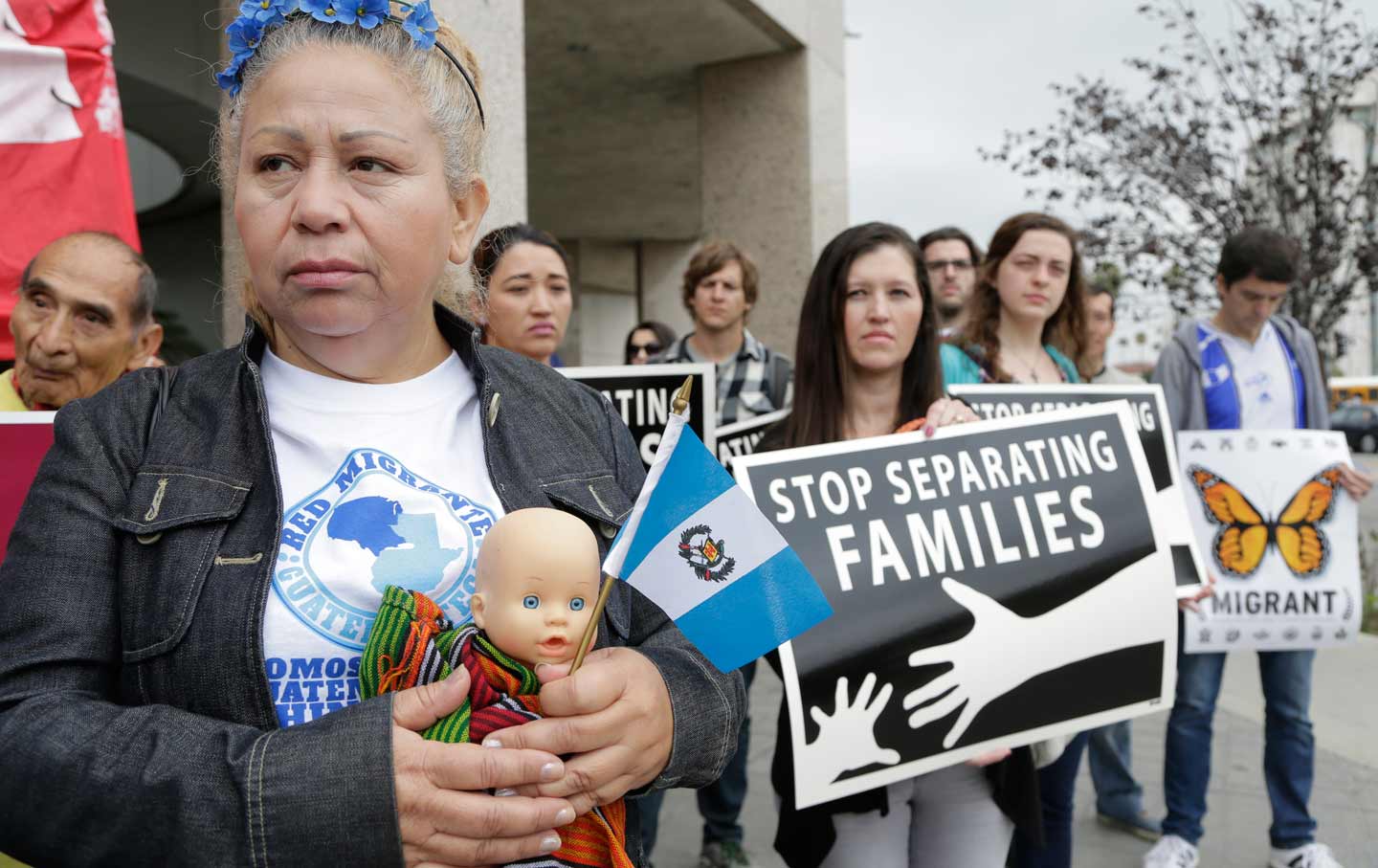 Law enforcement is in the business of dealing with insecurity. But the one thing that’s always secure about America’s law-enforcement system is the number of immigrants it imprisons each day. The government has written into law the number of non-citizens it seeks to deprive of freedom at any given moment: 34,000.

A study by Detention Watch Network (DWN) and Center for Constitutional Rights (CCR) explores the social impacts of the perverse incentive of the so-called “lockup quota” of 34,000 designated “beds” for immigrant detainees. The system locks in a federal funding stream and sustains jobs, commercial contracts, and a political consensus around the need for ever more “border security.” So the detention industry banks on 34,000 bodies, culled from a bottomless supply of more than 11 million undocumented migrants, as Immigration and Customs Enforcement (ICE) and local police round up and funnel in potential deportees.

DWN and CCR argue that “Local lockup quotas that serve to protect the bottom line of private companies thus incentivize the imprisonment of immigrants.”

The yearly spending—about $2 billion for fiscal 2016—and the headcount are the two numbers that matter. The deportation machine has fueled the churn of warm bodies, which it prioritizes over concerns that other law enforcement systems must deal with like the actual charges against detainees, their due process rights, or questions of their safety or the public’s.

The system has been on overdrive recently as the Obama administration accelerated deportations of Central American refugees who have not qualified for asylum. The goal is to restore “border security” by speeding their re-exile to dangerous home countries.

Migrants are warehoused under convoluted partnerships involving private vendors and state, local, and federal agencies. Homeland Security may contract out security duties to, or use facilities owned by, private vendors—dominated by Corrections Corporation of America (CCA) and GEO Group—with preordained headcount distributions ranging from 285 in Newark to more than 2,000 in San Antonio.

Abuse scandals regularly surface in immigrant detention centers, from allegations of sexual assault to the brutalization of transgender detainees. Though ICE has undertaken numerous reforms in recent years to enhance detainee health-care and regulatory oversight, a 2015 investigation of CCA facilities documented 32 deaths since 2004. Causes included cancer, cardiac arrest, and suicide. Many complain of being shunted into solitary confinement merely for protesting their conditions. Often victims of human rights violations in other countries are retraumatized in prolonged isolation. The social hardships of detention can diminish asylum prospects as they work through a labyrinthine legal bureaucracy.

While asylum application is rough for all detainees, those in for-profit detention facilities seem to qualify at even lower rates, according to a Center for American Progress analysis: “Poor conditions at these facilities, such as limited access to legal services, could contribute to low grant rates.”

The financial incentives and bureaucratic pressures associated with the local lockup quotas are particularly worrying when combined with easily manipulated enforcement, detention and release practices. Through mechanisms like these, financial considerations and private profit can affect government decisions to deprive immigrants of liberty at a concrete, local level.

The “financial considerations” contradict the human rights considerations of detainees like Wildin Guillen Acosta. The teenager recently resettled in Durham, North Carolina, after fleeing death threats from vicious gangs in Honduras. The star student was arrested earlier this year and detained indefinitely, after failing to qualify for asylum due to a botched legal process. He’d rather be getting ready to start college now.

While they scramble to navigate the bureaucracy as their deportation date nears, detainees may struggle just to survive another day in detention. Polyane, a young mother from Brazil who was detained at Karnes Residential Center in Texas, described the horrors she and her daughter faced in a letter to the government that described being arbitrarily denied bail, suffering from inadequate medical care, and being haunted by unresolved charges of sexual assault at the facility.

I am afraid that if I stay in this center something could happen to me or my daughter because the ICE tries to cover up everything and all news that happen here.

Whether or not detainees formally qualify for humanitarian relief, their detention arguably constitutes a massive human rights violation in itself.

Since the latest deportation drive began, according to DWN Co-director Silky Shah (disclosure: a former colleague of the author), pressures have escalated for both the affected communities and detainees:

The raids have no doubt exacerbated the culture of fear that has already been created in immigrant communities by the Obama administration’s policies and continued collaboration with local police for immigration enforcement.

Several facilities have erupted with hunger strikes and uprisings in recent months, as frustrated detainees have rallied against poor conditions and demanded immediate release. Grassroots protests are erupting in communities as well. At Hillary Clinton’s recent North Carolina campaign event, teachers disrupted the gathering to protest the mistreatment of Acosta and other student detainees.

An immigration detention system that capitalizes on the harshest forms of confinement parallels other elements of the prison-industrial complex, from privatized state prisons to punitive court-imposed “financial obligations.” Watchdog groups note a pattern among private prison firms of working as de facto real-estate “marketers” for empty prison space. Jeremy Mohler of In the Public Interest says via e-mail:

CCA and GEO Group have long histories of actively marketing their empty facilities to governments of all sizes, including agencies handling immigration…. The result is an immigration detention system that cuts against the grain of our efforts to reduce prison populations, because private prison companies make more money when more people are locked up.

DWN and CCR demand the abolition of lock-up quotas, “publicly accessible and transparent” data reporting on private contracting practices and security deals, and an end to “contracting with private companies that lobby to pervert public policy via guaranteed minimums and other contractual giveaways.” But even if the commercial bonds are severed, the incentive to dehumanize migrants will persist, because the detention industry emanates from structures of global inequality and state violence. This is not just the logic of capitalist markets, but the institutional culture of the prison industry and political establishment.