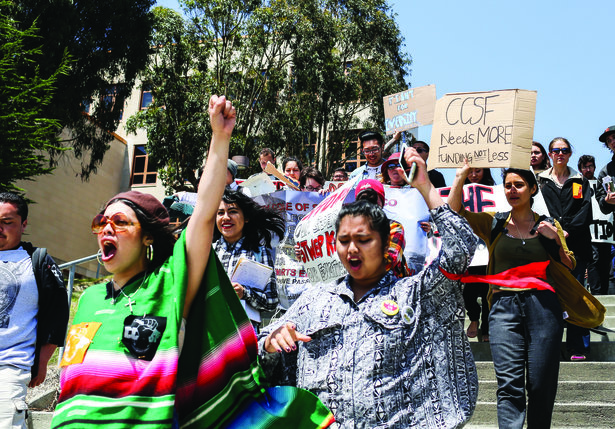 Students march across the Ocean Campus of the City College of San Francisco (Photo: Natasha Dangond, The Guardsman)

This post is part of The Nation’s biweekly student movement dispatch. As part of the StudentNation blog, each dispatch hosts first-person updates on youth organizing. For recent dispatches, check out April 24 and May 1. Contact studentmovement@thenation.com with tips. Edited by James Cersonsky (@cersonsky).

1. At City College, Walking Out

On Wednesday, May 6, more than 200 students and faculty walked out of class and held a sit-in at the administrative building of the City College of San Francisco, demanding an end to the Special Trustee with Extraordinary Powers, Guy Lease, the end to a payment policy that discriminates against non-AB540 undocumented students and the reversal of cuts stemming from the college’s illegal accreditation process. Despite a recent court decision demonstrating that the accrediting commission, the corporate ACCJC, broke the law in evaluating CCSF, the special trustee and administration continue to downsize and limit access to the college. At the rally, we highlighted the disproportionate impact these cuts have on Diversity Studies, resource centers, and the students they serve—students of color, LGBTQ students, single parents, formally incarcerated students, and those with special needs. On May 7, the Board of Supervisors held a special hearing at City Hall, but the special trustee—who has a $216,000 salary while students have been pushed out for owing minimal fees, hundreds of classes have been canceled and faculty haven’t received a raise since 2007—failed to attend. We will continue to mobilize until all demands are met.

On May 6, seven officers of the Associated Student Organization from Los Angeles Trade Technical College submitted our resignations to send a statement that the system discounts students’ voices. This was on the heels of the Los Angeles Community College District’s April dissemination of the audit reports of the student trust funds of the district, detailing the mismanagement of our fund—and calling for the reimbursement of $17,000 to the ASO. In our letters of resignations, we reported a range of grievances, including differential treatment, lack of support, gender discrimination, harassment, and racial and ethnic bias by the administration.

On November 18, 500 students at the University of California–Davis massed to commemorate the pepper-spray incident during the Occupy Movement in 2011—and protest upwards of 27 percent in threatened tuition hikes over the next five years. The next day, students from across the state converged on the UC–San Francisco campus to shut down the Regents meeting and fight the hike. Since then, students at UC Davis have held sit-ins, teach-ins, and building occupations to bring attention to the overwhelming debt and the ever-looming threat of tuition increase. On May 14, Governor Jerry Brown announced a two-year tuition freeze in his state budget.

On October 25, Louisiana State University students stormed the field at Death Valley stadium after we beat Ole Miss, reminding the campus and the city what it means to be “Forever LSU.” However, when LSU faced funding cuts up to 82 percent related to state budget deficits, the Baton Rouge campus was silent until a small group of students organized “Make the Change: March the Capitol.” On April 30, 1,200 students, alumni, Louisiana residents, and legislators marched to the steps of the state capitol and vowed to speak out and put the pressure on state representatives to save higher education. Through the action, we registered dozens of voters, sent 8,000 personalized emails to legislators and, on May 7, saw House legislation that would cover all higher education funding.

On Monday, April 20, Cards United Against Sweatshops began a 96-hour occupation of the administrative building at the University of Louisville. We decided to escalate after ongoing failure to work with the administration to get the university to cut its licensing contract with JanSport. JanSport is a subsidiary of the VF Corporation, which refuses to sign on the Accord on Fire and Safety in Bangladesh, a legally binding agreement that would mandate safety inspections of all factories a company has in Bangladesh. On April 24, the second anniversary of the infamous Rana Plaza collapse, we decided to end the sit-in. On May 7, the university announced that it would not be renewing the contract—the 19th school to cut ties.

6. A Hunger Strike for Jobs

From May 3 to 9, five students from the Tufts Labor Coalition staged a hunger strike to protest planned layoffs of 20 to 35 campus janitors—or 10 to 17 percent of the total workforce. The cuts, which make sense neither morally nor economically, are set to take effect at the beginning of June. Dozens of students joined the hunger strikers in a tent encampment outside of Ballou Hall, the main administrative building, with support throughout the week by janitors, faculty, students, local politicians, and community members. As meetings between TLC and the administration continue to be fruitless, actions will continue until Tufts cancels the cuts.

7. Finally, a Step for Trans Justice

In the spring of 2013, students at Smith College founded Q&A to advocate for a trans women–inclusive admissions policy. Since then, we’ve met with administrators, organized educational events and staged protests. On May 2 of this year, the college changed its policy, which required “F” gender markers on all parts of the application, to one that is based on female self-identification. While our refrain, “trans women are women,” has sunk into the collective conscious of Smith College, we must continue to challenge cultural attitudes about trans women. Moving forward, Q&A will work to make Smith a space in which all trans women can thrive by supporting organizing for the rights of undocumented students, recruitment and retention of students of color, accessibility for students of dis/abilities, and economic justice.

8. In Arizona, a Historic Win for Undocumented Youth

On May 7, the Arizona Board of Regents announced that the state’s public universities would grant in-state tuition to DREAMers, undocumented young people who arrived in the United States as children. The decision followed a May 5 ruling in which a state judge ruled that DACA-approved youth, who have work visas under the Deferred Action for Childhood Arrivals program, should be granted in-state tuition at Maricopa County Community Colleges. For the past three years, a statewide coalition including the Arizona DREAM Act Coalition, Scholarships AZ, Flagstaff No More Deaths and Arizona State University’s Graduate and Professional Student Association has worked to put a human face on this issue. We marched, shared stories, and won the support of allies ranging from the Flagstaff City Council to Phoenix Mayor Greg Stanton. Now that the doors to higher education are open for Arizona’s 22,000 DACA students, we are planning to explore options for financial aid and resources for undocumented young people while defending our rights from ongoing attacks.

9. In New York, the Ongoing March for Equality

On March 25, for the second year in a row, students from NYCLetEmPlay took over the New York City Council education budget hearing to protest the city’s separate and unequal high school sports system: 17,000 students of color go to a public high school with no sports, and 38,000 have no sports this spring. At the hearing, more than a hundred students stood in front of Chancellor Carmen Fariña, rose our black fists like Tommie Smith and John Carlos from the 1968 Olympics and chanted #CivilRightsMatter—only to be dismissed and kicked out by the police. The following day, the city’s Department of Education retaliated by firing our media arts teacher who has been filming our protests and reassigning our dean and college counselor who have stood in solidarity. In turn, we walked out of school, marched to City Hall and staged a sit-in in the hallways. We will continue protesting every Wednesday in front of the department and City Hall until our demand that all students of color have equitable access to sports is met. On May 20, we will move to the Panel for Educational Policy in Brooklyn to testify in front of Chancellor Fariña.

Editor’s note: On May 13, hundreds of young people filled the streets of Madison, Wisconsin, demanding justice following the non-indictment of officer Matt Kenny for the killing of 19-year-old Tony Robinson. (Video: Freedom Inc)