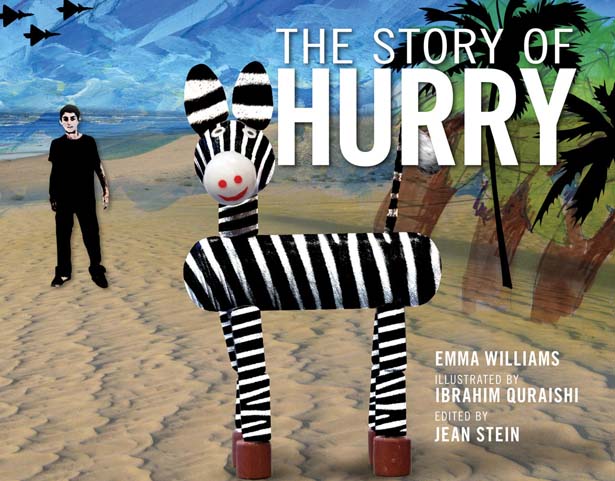 If you happen to have wandered into the children’s section of a bookstore recently—for your own kid or a friend’s kid, or simply to revisit the cozy, Technicolor sensation of being four again—you may have noticed something startling amid the potty books and engineering primers: the landscape of contemporary children’s literature is strangely bereft of books of conscience. The cheeky-poignant warnings that Dr. Seuss once sounded against the oily beasts of greed, discrimination and climate disaster have long since given way to princess romps and battery-powered truck books, while books with alphabet memes and number schemes have come to dominate the shelves. If you want to teach your child to brush her teeth, make a friend or brave the dark—all worthy enough endeavors—take your pick; if you want to shape her into a sensitive global citizen, good luck.

Earlier this year, however, a slim book arrived on American bookshelves featuring a cover portrait of a donkey shadowed by warplanes. The book is called The Story of Hurry, and, unlike its sugarcoated peers, it eschews princess fantasies, Elmo tie-ins and beeping garbage trucks in favor of a sweet-and-searing tale of life inside one of the most tattered lands on earth. That this land happens to be the Gaza Strip, a place that barely registers even among grown-up publishers, is all the more astonishing.

The Story of Hurry was written by Emma Williams and edited by Jean Stein, with illustrations by Ibrahim Quraishi. Lyrical and tender, with pictures that mix tone and media, it is an attempt, in Williams’s words, to tap into children’s “innate sense of justice” and “amazing sense of inquiry” in the hope they will provoke conversations that “confound” us.

“I hope my book would give [children] the potential to ask questions,” said Williams, a doctor-turned-writer who spent three years living in Jerusalem with her husband, a United Nations diplomat, and four children. “Why is this allowed to happen? What about the children on the other side, what do they think? Why do the soldiers do that? These questions need asking and need answering.”

The book goes about provoking these questions by following the adventures of a “little donkey,” named Hurry, who just wants to make children happy. Hurry lives “in a dry and lonely land by the sea” where the children often go hungry, the electricity frequently falters and, some nights, bombs fall from the sky. Grownups will recognize this land as Gaza, though its name is never mentioned in the book, nor is Israel’s. The book also sidesteps words like “war” and “siege,” but it is clear, from both text and pictures, that the children of this land lead fearful, walled-in lives. They wander to the beach to play but are “chased out of the sea by angry men.” They go to the zoo in search of fun and escape, but the animals are “thin, and sad, and few.”

Hurry bounds through this harsh, strafed landscape trying to cheer the children—giving them rides on his back, nuzzling them in their sadness—until, one day, he encounters a little girl who cannot be cheered. Sitting by a well where the water comes out salty, not sweet, she cries for the ordinariness of a childhood she cannot have—one where the food is good, electricity is constant, the skies are safe and little girls have the freedom to run, play, visit the mountains and explore other cities. Above all, she longs to see the “strange animals” she reads about in her books.

As he listens to the little girl’s lament, Hurry gets an idea. He trots off to the zoo, where so many of the animals have died for lack of water, and gets a makeover. By the end of the book, he has been painted with a zebra’s black-and-white stripes, and the kids, though still not free, have an escape from the gloom of life under siege.

In explaining how they came to write The Story of Hurry, both Williams and Stein have cited the classic children’s book, The Story of Ferdinand, as inspiration. The Story of Ferdinand tells the tale of a gentle young bull who refuses to fight like all the other young bulls, preferring instead to spend his days curled under a cork tree, smelling the flowers. Written by Munro Leaf in 1936, on the eve of the Spanish civil war, the book has widely been interpreted as a pacifist statement—an attempt to speak truth to the least powerful but most sensitive—and it was promptly banned in Spain and burned by the Nazis. Yet, where The Story of Ferdinand is pure allegory—and rooted safely in the past—The Story of Hurry is rooted in the firmness of actual events; it is journalism transposed into the lilt and rhythm of children’s literature.

Stein stumbled on the real-life story in a newspaper clipping not long after Operation Cast Lead, the Israeli assault on Gaza that spanned more than three bloody weeks in late 2008 and early 2009. Nearly 1,400 Palestinians were killed, including as many as 350 Palestinian children, and thirteen Israelis lost their lives during the offensive, which also destroyed thousands of homes, pummeled factories, ruined farms, damaged water wells and killed scores of animals. Some of those were the exotic creatures that had once lived at the Happy Land Zoo. In the grim aftermath, the zookeeper painted two white donkeys with black hair dye and transformed them into what he called “zebras made in Gaza” to cheer the children traumatized by the war.

“I just saw that little story and thought that it would be a fable, and sometimes fables can reach people more than hard news,” said Stein, an oral historian and editor who helmed Grand Street for fourteen years and worked as an editor at The Paris Review. (Full disclosure: Stein is also a personal friend of mine and the mother of Nation editor Katrina vanden Heuvel).

Williams, too, was attracted to the notion that a children’s book could slash through the thicket of ideology and indifference that buries so many well-meaning books about life under Israeli occupation. Having written a memoir about her experience living in Jerusalem, It’s Easier to Reach Heaven Than the End of the Street, she was eager to try another approach. And she was anxious to tell the particular and bleak story of Gaza’s children—a story that flares into view every few years when war erupts and young kids begin dying in Israeli airstrikes, but then recedes while a more quotidian awfulness engulfs them.

“No child in Gaza is untouched,” said Williams. “Three wars in seven years, knowing nothing but war and dust and concrete, and somehow the international community is letting this happen.”

Indeed, in the time since Williams, Stein and Quraishi began drafting their fable, life has gotten unspeakably worse for the children of Gaza and their families. More than 500 Palestinian children were killed and more than 3400 were wounded this summer during the fifty-day bludgeoning that Israel dubbed “Operation Protective Edge” (one Israeli child was also killed). Whole neighborhoods were flattened, with the Israeli military destroying homes, hospitals, schools, power stations and government buildings—the basic scaffolding of daily life. With much of Gaza still in ruins, and nearly 20,000 people still living in UN shelters, Gaza remains in the grip of a crippling humanitarian crisis.

The world, however, has largely moved on from Gaza, which is among the reasons The Story is Hurry is so valuable. In its quiet, insistent way, it pulls readers back to this caged-in land of sonic booms, salty wells, high walls and painted donkeys.

“I think it’s a little something different for me to read,” said Emily Walker, a sixth grader from California who read the book and also presented a report on the Happy Land Zoo and its hand-painted zebras to classmates. “I thought that that must be really scary living there and everybody bombing, that would be really scary to me.”

Walker’s classmates also thought it was scary, which is why, after hearing her report, they all “wanted to help,” with a few suggesting they send water and supplies or even start a children’s center, she said. These were naïve hopes, to be sure, at once over-simple and over-ambitious the way kids’ hopes (and maybe all our hopes) can be, but they also tapped right into the deep vein of empathy that runs throughout The Story of Hurry. And at a moment when the grown-up world is doing a monumentally poor job of modeling empathy, a book that inspires altruism and a creeping knowledge of injustice in its young readers feels a lot like a revelation.

As this wounded year ends and a new one begins, we need many, many more of these revelations.