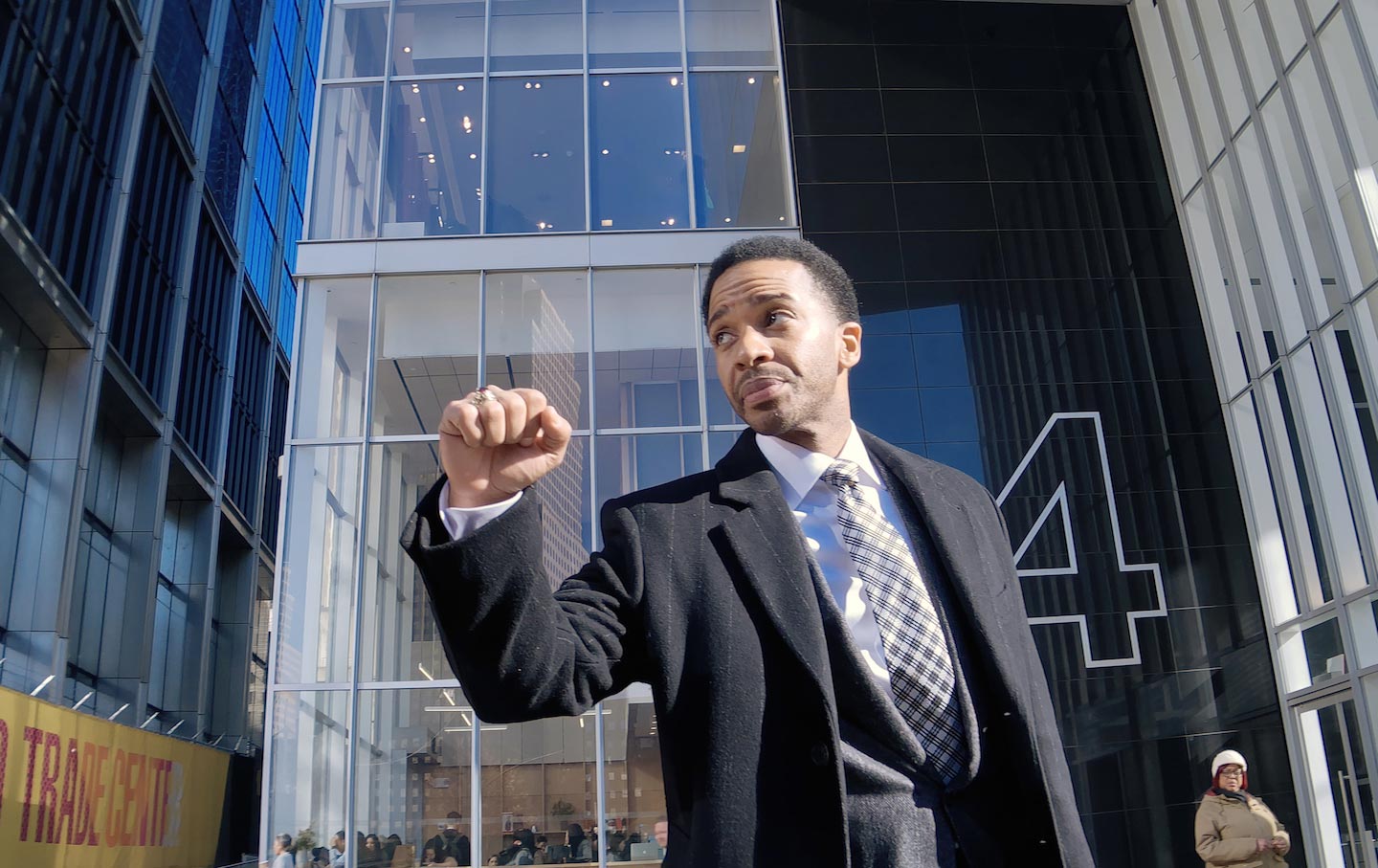 When a collective-bargaining agreement between professional athletes and team owners is set to expire, negotiations commence to shape the new one. If those talks fail, a lockout occurs, and everyone employed by the league, directly or indirectly—from the players to the refs to the peanut vendors—is forced to stop working until a new contract is approved. The National Basketball Association has experienced four lockouts.

A fifth one is the setup for Stephen Soderberg’s new film High Flying Bird. When sports agent Ray Burke (André Holland) is asked how he’ll handle an NBA shutdown that has persisted for six months, he seems strangely confident. “I’m not out, I’m just outside,” Ray says. It’s not very convincing: His star client, top draft pick Erick Scott (Melvin Gregg), is low on cash and making rash decisions; the agency that Ray works for is threatening to fire him; and the NBA players’ union remains in a stalemate with the league’s owners. Ray’s mentor, Spence (Bill Duke), a retired player turned middle-school coach, refers to this larger conflict as “the game on top of the game,” and from his perch it looks like his protégé is firmly benched. But Ray sees the sidelines as a useful vantage point, and High Flying Bird details the game he plays between the games. Arch and imaginative in equal measure, Soderbergh’s film teases out alternative ideas of work, ownership, and agency, in sports and beyond.

Working from a script by Tarell Alvin McCraney (Moonlight), Soderbergh structures the film around the endless negotiations that occur in the back channels of a labor dispute. The strain of the lockdown colors every conversation in the film, and Soderbergh frequently stages these encounters in spaces where the speakers struggle to assert themselves. Soderbergh shot the film on an iPhone, and the many elevators, offices, hallways, bars, cars, and living rooms in it feel cramped and confined. The characters fit into these spaces awkwardly, their voices lowered, their shoulders hunched. The forced intimacy of these small enclosures fosters witty exchanges and oddball asides, but Soderbergh’s larger interest in that discomfort is to highlight the divergent stakes of the lockout, and of work in general. As some characters spend the shutdown in repose, others lose their grip, the disparity clearly determined by both status and the perceived value of their labor.

High Flying Bird opens in a posh restaurant where Ray and Erick are loudly whispering about the latter’s poor financial decisions. A rookie with no income beyond the NBA, Erick has been scammed by a loan shark and frets over his ability to repay the debt. Ray, familiar with the ways that rookies get targeted by con artists, scolds his client but remains calm and finally dismisses the issue, assuring Erick that, as his agent, he has things figured out. That claim to authority melts away when Ray’s company credit card is declined as he attempts to pay for their lunch. Erick doesn’t flinch, but you can feel Ray’s confidence deflating as he reaches into his wallet for cash. He leaves Erick a package that he calls a “bible” and tells him not to open it until he’s ready. They both could use a miracle.

Later, Ray’s former assistant Sam (Zazie Beetz) requests a surprise meeting with Myra (Sonja Sohn), the players’-union representative, in the back of Myra’s chauffeured car. Sam is attempting to learn why Ray would cling to being an agent despite appearing so powerless, and Myra uses Sam’s inquiry to glean that Ray is scheming to somehow end the lockout. They both gain something from the conversation, but it’s clear that their status dictates what they can do with the information they’ve learned—as the rep for all the league’s players, Myra is emboldened to challenge Ray; as an agent’s assistant, Sam can only observe Ray’s plan taking shape. These moments illustrate the differing stakes for everyone with ties to the league, as well as the way these power disparities persist during the arbitration. When Myra exits her car to meet with Ray, you can feel the disequilibrium of their responsibilities: He reps a single player; she represents a corps.

Will Colin Kapernick Ever Play in the NFL Again?

Ray is a maverick within this dispute because he refuses to negotiate on unfair terms. Seeing his clients as partners rather than paychecks, he views himself as an advocate for athletes, someone committed to leveling the playing field. This determination gives Ray an agency that the lockout doesn’t allow for anyone playing by the rules. On the one hand, he clearly undermines the integrity of the collective bargaining. But on the other, High Flying Bird subtly makes the case that Ray, as a black man, is a double agent of sorts. He sees the players as workers and victims, and he works whatever angle will net the best deal for them.

The film’s strength is that it often complicates our picture of Ray’s cunning. He constantly misdirects, omits, and understates, frustrating the people around him and testing their patience. The results of his constant trap-laying and brokering are respected, but his methods are resented. Despite Ray effectively ending the lockout, his secrecy and prickly demeanor eventually cause Erick to fire him and his colleagues to distrust him. While this isn’t a Pyrrhic victory per se, it does come at a cost. Ray has the ingenuity to shake up the status quo, but his pitch to undermine the league comes across as self-serving. When he talks of disruption and selling footage of a viral basketball game to YouTube and Netflix, he doesn’t sound all that different from the league’s owners. (His love of three-piece suits doesn’t help either.)

Clips of interviews with actual NBA players Donovan Mitchell, Karl-Anthony Towns, and Reggie Jackson dot the film, and the contrast between their cautious optimism and Ray’s exacting strategizing is sharp. The way they talk of getting their bearings and accepting the ups and downs of life in the spotlight demonstrates a long-term investment in the league. For Ray, moving outside the system places him above it; for the players, being within the system means understanding it on their own terms, harnessing their strength as individuals and as a collective. The odds are stacked against them, given the staggering power of the team owners—but that’s the point of their union. The players’ labor defines the league; it is through their bodies and lives that the league powers its spectacle. While there are many games being played around them, they are the game.

Ray has his wings clipped by the end of the film, but High Flying Bird isn’t some morality play about flying too close to the sun. It’s more interested in the possibilities that emerge when black people’s needs are given priority. Ray’s last meeting in the film is with the real-life sociologist Dr. Harry Edwards. The door closes before we hear their conversation, but the cameo is crucial. Edwards penned the “bible” that Ray gives to Erick at the beginning of the film—the 1969 memoir, manifesto, and study The Revolt of the Black Athlete—and the book contextualizes Ray’s brusque tactics. Part guide to revolution, part history of the Olympic Project for Human Rights, which coordinated the 1968 podium protest by Tommie Smith and John Carlos, Revolt offers Edwards’s own activist experiences to illustrate how sports institutions prey on black talent.

The tone of the book is spirited, defiant, and deeply personal. Before he became an academic, Edwards ran track, threw discus, and played basketball, so he had direct knowledge of the false promise of sports as a guarantor of equality. Playing at recently integrated schools, Edwards found himself mistreated by his teammates, coaches, and faculty. As an undergraduate at San Jose State, he discovered that his housing opportunities were limited because black tenants were discriminated against, and he was also shut out of the campus’s social life. Because San Jose State lacked a nearby black community, Edwards spent his free time “having dinner in a second-rate restaurant, viewing a third-rate movie, and then returning to a dull, depressing room in some isolated corner of the campus to talk sports or exchange banalities and wait for another day that promises more of the same.” Athletic life was no less disheartening: “A black athlete on a white campus cannot afford to make mistakes or perform occasionally at a mediocre level,” Edwards writes. “He is expected to be tireless. If he slows up, it is because he is not in shape. He is always supposed to go at top speed and if he doesn’t, he has let the entire Negro race down.” Though Edwards found solace in his studies, the bitterness of this experience remained with him. “Like a piece of equipment, the black athlete is used,” he bristles.

Drawing from his own setbacks as well as the accounts of others, Edwards develops his core idea that black athletes are an “athletic commodity.” When he eventually returns to San Jose State—this time as a professor after attending graduate school at Cornell—he’s dismayed that younger athletes like Smith and Carlos are still facing the same barriers he once did. The key to changing that, he realizes, is changing who owns the players’ labor. Citing high ticket sales and low graduation rates, he petitions for athletes to leverage their commodity status to reap the benefits of their hard work. Athletes—and all students, really—should be able to make demands of the institutions they pay: for new teachers, new courses, new coaches, and fair housing. For Edwards, it’s a matter of dignity: To be treated unfairly is not to be recognized.

Decades later, that fight for recognition and fair compensation continues in basketball and in sports at large. For student and women athletes, work continues to be artificially devalued. That athletes deserve to shape the conditions of their labor is Ray’s fundamental belief in High Flying Bird as well, and his tough-love approach to sports makes his priorities apparent. He wants the black people around him to not be broken by the decisions being made in the meetings they’re excluded from. He wants his clients to know the stakes before they play the game. The Revolt of the Black Athlete makes such demands feel possible and necessary for a healthy relationship to sports and society. It’s a flawed book, given its neglect of women’s sports (Edwards apologizes for this in the introduction to the 50th-anniversary edition), but its enduring value is its insistence that bargaining—with institutions large and small, Olympian and local—is normal and requisite for any relationship that requests our time and our talents. In High Flying Bird, the lockout simply ends without any of the terms being disclosed, but through Ray’s finesse, Soderbergh makes it clear that we don’t have to know the game to see that it’s broken.