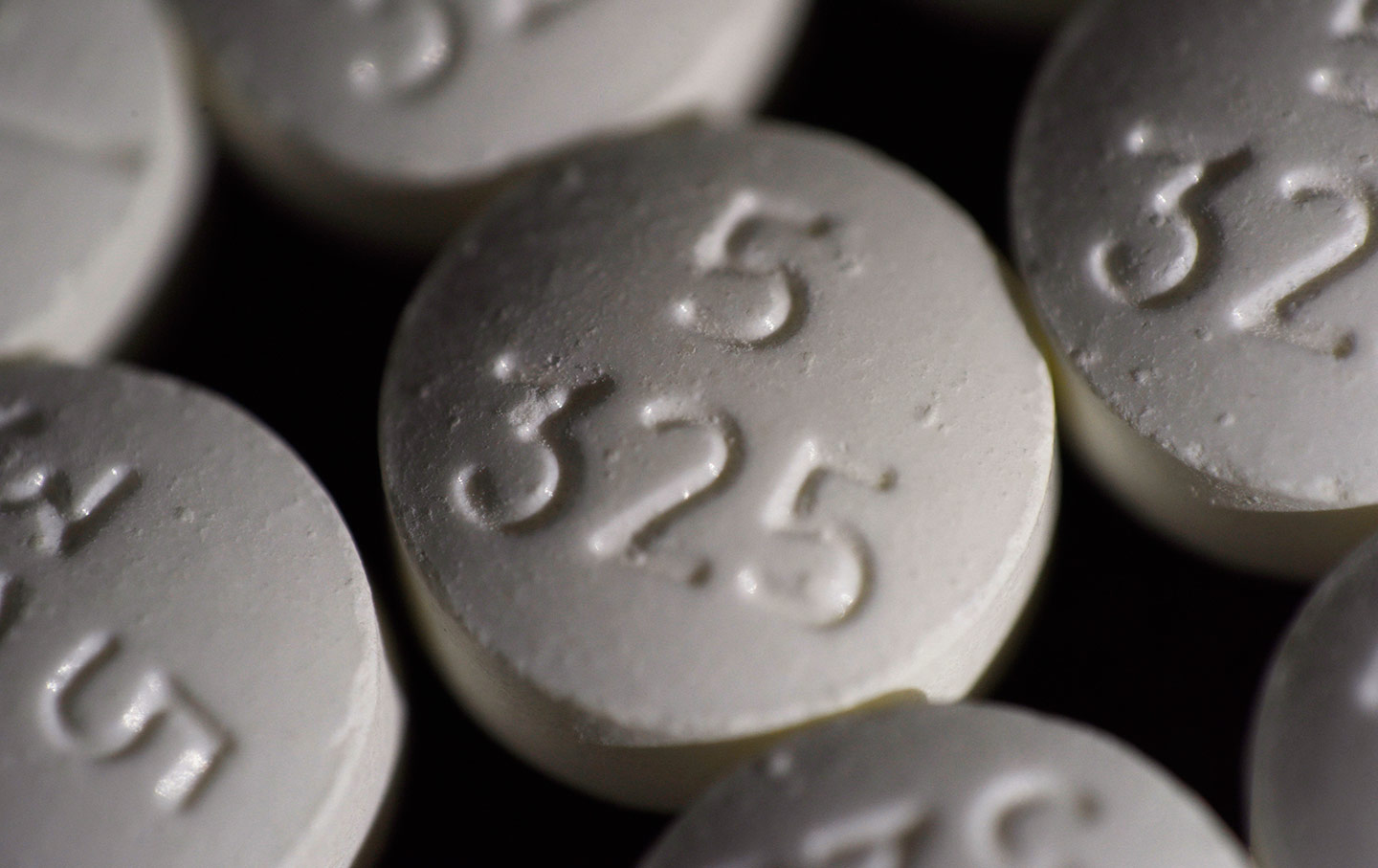 An arrangement of pills of the opioid oxycodone-acetaminophen. (AP Photo / Patrick Sison)

We tax cigarettes and alcohol, two legal substances with damaging public-health effects. So why not prescription opioids?

A number of states are asking that question as they look for sources of funding to respond to the opioid crisis, which kills an average of 115 people in America every day. Legislation has been introduced in at least 15 states that would tax prescription painkillers like Vicodin and OxyContin, with most of the legislation introduced in the past year, according to the Associated Press. In most cases the revenue—which could amount to tens of millions of dollars for states each year—would be used to pay for addiction prevention and treatment programs. The rationale is that since opioid manufacturers and distributors helped spark widespread addiction by deceptively advertising and aggressively pushing painkillers, they should help pay for the collective damage. “You’re creating the problem. You’re going to fix it,” one Republican state senator in Montana explained.

The Left Needs to Care About the Opioid Crisis

Though many of the tax bills have some bipartisan support, few have actually gained enough momentum to become law. That may in part be because of strong opposition from pharmaceutical-industry lobbyists, who argue that taxing prescription opioids would unfairly raise costs for patients with a legitimate need for such drugs. But even among those who criticize the drug industry for its role in the addiction crisis, there is some disagreement about how effective the taxes or fees would be.

“I think it’s a good idea,” said Andrew Kolodny, co-director of the Opioid Policy Research Collaborative at Brandeis University’s Heller School for Social Policy and Management, in an e-mail. “Overprescribing is having a devastating impact on individuals, families and communities. With a tax, their price might better reflect their true human and economic cost.”

But Keith Humphreys, a professor of mental-health policy at Stanford University and former drug-policy adviser in the Bush and Obama White Houses, said that the fine print of the legislation matters. Many of the proposals would tax opioids per dose, a strategy that Humphreys doesn’t think would discourage overprescribing, because it wouldn’t affect doctors directly; meanwhile, Medicaid and Medicare (and, effectively, tax payers) could end up paying increased costs. Unlike alcohol and tobacco, opioids do have legitimate, and essential, medical purposes. “Yes, we overprescribe horribly, but that doesn’t mean we want a blanket cut [for] all patients,” Humphreys said.

A better legislative model for holding the pharmaceutical industry to financial account, according to Humphreys, is a bill passed in New York State in early April. New York’s law—the first of its kind—charges companies that manufacture or distribute opioids in the state a collective $100 million per year. The amount that each company pays is tied to its market share, and the money will go into a “stewardship fund” to pay for prevention, treatment, and recovery programs. “They’re saying, ‘This product causes a lot of damage, and we’re taking money from you to pay for that damage,’” said Humphreys. The law expressly forbids companies from passing the added costs on to patients, though it’s not clear how that will be enforced.

“They’re saying, ‘This product causes a lot of damage and we’re taking money from you to pay for that damage.’"

Lawmakers in Minnesota, who initially considered a “penny-a-pill” tax, are now taking an approach similar to New York’s—a $20 million-a year-registration fee for drug makers and distributors, which Republican State Senator Julie Rosen described as the “cost of doing business in Minnesota.” The proposal passed out of committee unanimously, and has support from Governor Mark Dayton.

Funding for treatment and a lack of treatment infrastructure are critical issues in many states. A recent White House report found that 85 percent of all US counties lack drug-treatment programs that provide medication-assisted therapy; a 2016 report from the Surgeon General found that only one in 10 people with a substance-use disorder gets specialty treatment, while 30 percent of those who didn’t seek treatment reported it was because they could not afford it. Taxes or fees on drug companies aren’t the only way to solve the problem. Another, simpler way to make treatment more accessible, said Humphreys, would be to “mainstream” it: to make sure that evidence-based therapies are covered by insurance plans, and to expand Medicaid in all states.