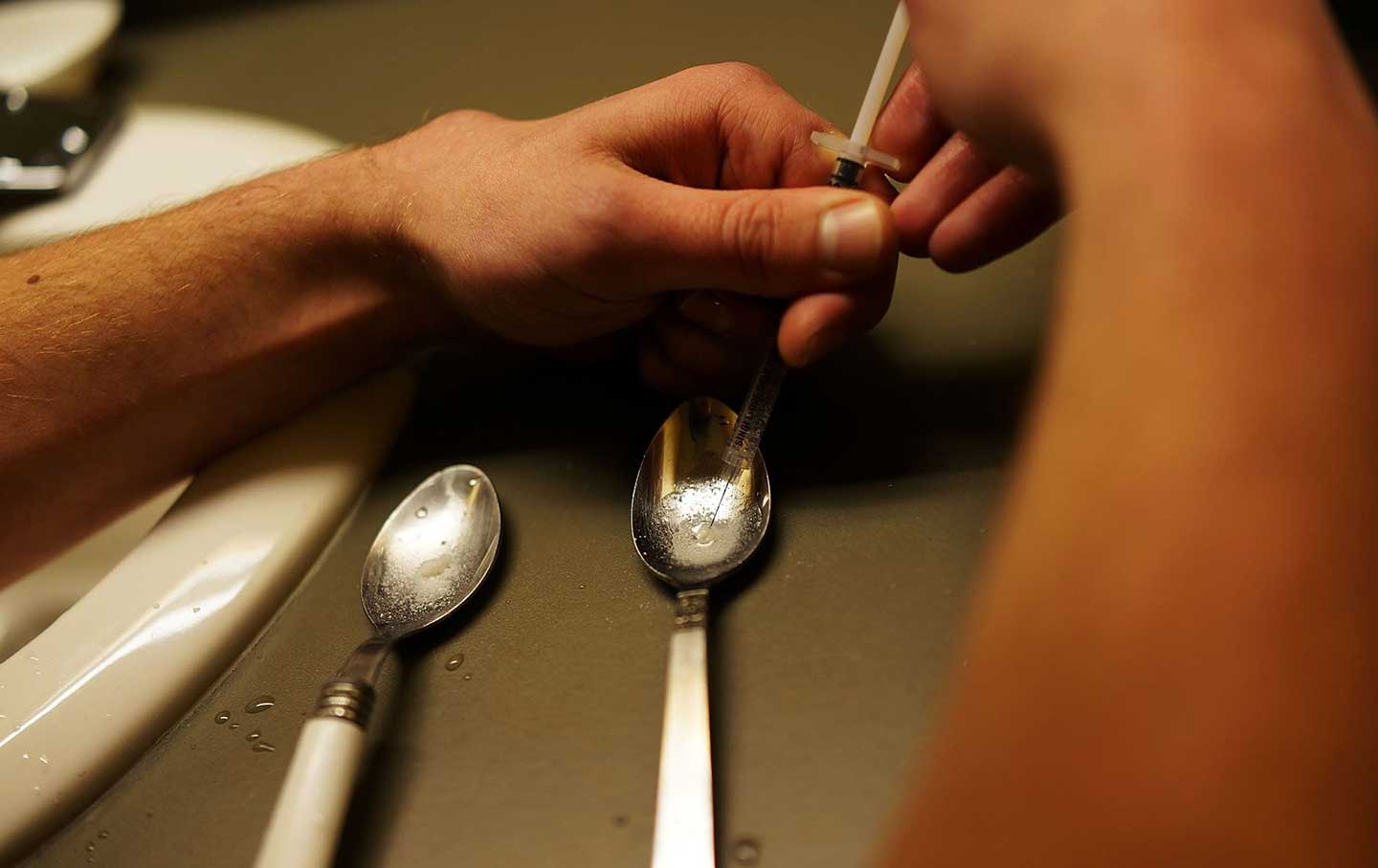 Drug overdoses and drug-related diseases have killed nearly 400,000 people in the United States over the past decade—on par with the number of American soldiers who died during World War II. Nearly 400,000 others have committed suicide, while 250,000 died from liver disease and other alcohol-related illnesses. About a fifth of all of these deaths involved prescription painkillers or heroin. Together, these “deaths of despair” have been destructive enough to shorten the life span of a whole demographic group, namely middle-aged white people without college degrees.

Beyond its devastating effect on families and communities, there is emerging evidence that this health crisis also has political repercussions. Consider Coos County, New Hampshire, which occupies the state’s northern tip and has the highest death rate from drugs, alcohol, and suicide in all of New England. It used to be reliably Democratic: Barack Obama won the county by nearly 20 percentage points in 2008 and again in 2012. But this year Donald Trump took it easily, by nearly 10 points.

Coos County is not an isolated case. Across the country, and particularly in the industrial Midwest and New England, Trump was unexpectedly successful (as compared to Mitt Romney) in counties heavily burdened by opioid overdoses and other “deaths of despair.” That’s the conclusion of a new research paper by Shannon Monnat, a sociologist and demographer at Pennsylvania State University. It adds to previous reporting on Trump’s appeal in areas shaken by addictions and white mortality. In New England, according to Monnat’s analysis, Trump actually performed more poorly than Romney in counties experiencing low levels of mortality from drugs, alcohol, and suicide. But in the hardest-hit counties in that region, he did better than Romney by nearly 10 percent, on average. In Midwestern counties with high mortality rates, Trump bettered Romney’s averages by more than 16 percent. (The Economist also found that poor health within a county was a strong indicator of Trump’s over-performance, though that analysis considered a wider range of health metrics.) 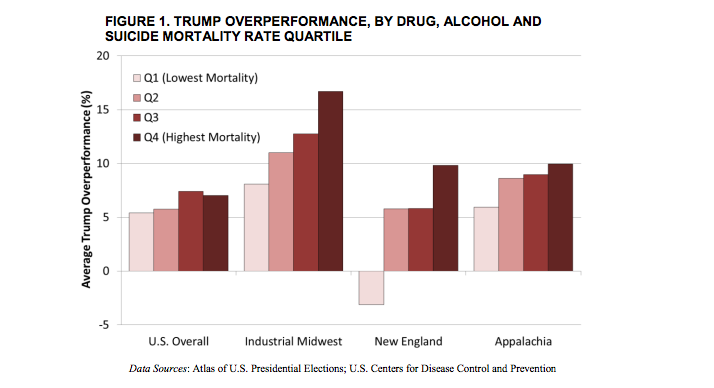 Monnat’s research doesn’t prove that deaths of despair alone caused the swing towards Trump (or caused Democratic voters to stay home), just that there is an association. After controlling for more than a dozen factors, Monnat found that some of the relationship can be explained by economic distress, which is acute in many of the areas where Trump over-performed and where mortality rates are high.“In the kinds of places that I’m talking about, jobs have been declining for at least three decades, and the dignity of work has been replaced by suffering and the feeling that the people in power don’t care about them,” Monnat told me. “All of these things are working together to drive Trump’s over-performance. And they’re really reflecting larger systemic social and economic problems that go beyond drugs, alcohol and suicide mortality.”

Still, economic decline in many of the counties that swung unexpectedly towards Trump predates the Obama administration. So does the surge in deaths of despair: Anne Case and Angus Deaton, Princeton economics professors who documented the trend, trace it back to the late 1990s. Sam Quinones, journalist and author of Dreamland: The True Tale of America’s Opiate Epidemic, notes that in southern Ohio Trump ran away with counties that Romney barely won, though employment has picked up in the last few years. That region was once the pill-mill capital of the country; since the last election, heroin (and media coverage of it) has spread, with deadly consequences. Even if that trauma is tied to decades-old economic trends, it feels new, its urgency unmatched by the sluggish response from politicians.

Trump spoke to the concern about drugs and to racial anxieties in the same breath.

Trump offered a scapegoat for the overdose crisis and the related, rapid fraying of the social fabric in white communities: immigrants. As historian Kathleen Frydl points out, though many counties marked by a high level of support for Trump actually have experienced comparatively low levels of immigration from Mexico, they were awash in news of an influx of heroin from Mexico, fentanyl from China. Trump spoke to the concern about drugs and to racial anxieties in the same breath, promising to keep heroin out with his wall, and to deport millions of “gang members [and] drug dealers.” At a June rally in Ohio, he blamed the nearly 20 percent increase in overdose deaths in the state on a porous border. “We need the wall. We need to stop illegal immigration. We will stop it. We’re not going to have drugs pouring into our country and destroying our youth,” he said. Less than two weeks before the election, Trump promised voters in New Hampshire, “Not only will a wall keep out the dangerous drug dealers, it will also keep out…the heroin poisoning our youth.”

In fact, many narcotic addictions and overdoses were, initially, homegrown—kick-started by prescription opioids relentlessly marketed by American pharmaceutical companies, who’ve profited handsomely. Building a wall won’t do anything to ease the demand that is already here. Overall, it’s unclear what Trump will do to improve public health in the communities that elected him (and in others: White middle America is hardly the only community facing acute health issues), particularly since Trump’s Republican colleagues in Congress have been reluctant to devote significant resources. Trump has said he’ll “spend the money” to expand treatment, but he hasn’t been specific about a plan to do so. Instead, his administration is poised, along with congressional Republicans, to make it much harder for people with addictions to get help.

Since the Affordable Care Act was passed, 1.2 million people with substance-abuse disorders have gained insurance coverage for treatment through Medicaid. The expansion helped somewhat to make up for a decline in public-health funding in many states. “It’s hard to convey how much worse things were before the Medicaid expansion,” the director of an addiction and mental illness treatment center in southern Ohio recently told The Columbus Dispatch. The health law also made it mandatory for private insurers to cover substance-abuse treatment. Trump, along with Representative Tom Price, his nominee to head the Department of Health and Human Services, has promised to repeal the health-care law. The replacement Price proposed does not require insurers to cover treatment for addiction.

Monnat told me that deaths of despair originate in “a desire to escape pain, stress, shame, anxiety, and hopelessness.” Trump validated, amplified, and exploited all of those feelings. The open question is whether he has a real commitment to alleviating them.