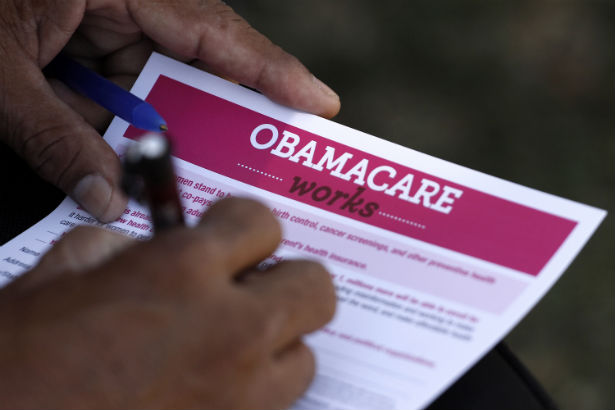 A person fills out an information card during an Affordable Care Act outreach event. (Reuters/Jonathan Alcorn)

Republicans in the House voted on Wednesday to repeal the Affordable Care Act—for the fifty-six time. After four years these show votes have become a tedious joke. But Wednesday’s action had bleaker implications, as it was cast in the shadow of a lawsuit that could undermine the healthcare law in fatal ways.

In a few weeks the Supreme Court will hear oral arguments in King v. Burwell, which contends that the text of the ACA allows the IRS to give subsidies only to people who purchase insurance through exchanges set up by their state, and not to those who rely on the federally run marketplace. If the plaintiffs prevail, some 7 million people in the thirty-four states that have declined to set up their own exchanges would lose the tax credits that subsidize their insurance. Coverage would likely become unaffordable for many of them; without enough people in the marketplace, the law could collapse into a “death spiral.” In human terms, a group of hospitals wrote in a brief supporting the government, a ruling in favor of the plaintiffs “would be a disaster for millions of lower- and middle-income Americans…. The ranks of the uninsured will swell again, with all that portends in the way of untreated illness and overwhelming debt.”

To build their case, the plaintiffs have erected a rickety scaffold of fictional history around a single phrase in the 906-page law. The section of the law in question concerns the calculation of subsidies available to people “enrolled in through an exchange established by the State.” The plaintiffs argue that lacking an explicit reference to subsidies available to people enrolled in the federal exchanges, the text indicates that subsidies are only available in states operating their own. Furthermore, the plaintiffs argue, this was not sloppy writing but instead “reflects a specific choice by Congress” to design the subsidies as a carrot to entice states to establish their exchanges and punish them if they failed to do so.

The lack of structural integrity in the plaintiff’s case has become increasingly obvious in the past week, thanks to a sheaf of briefs filed by filed by states, lawmakers, and the healthcare industry. In sum, there’s about zero evidence for the challengers’ version of history, and what proof they do muster is shoddy. For example, one brief cites former Nebraska Senator Ben Nelson, who played a defining role in designing the exchanges. According to the plaintiffs, Nelson thought it was “insufficient to merely allow states the option to establish Exchanges,” hence the need for a stick. But Nelson himself stated recently that he “always believed that tax credits should be available in all fifty states regardless of who built the exchange, and the final law also reflects that belief as well.”

It’s not hard to find conservative lawmakers, like Senate majority leader Mitch McConnell, who will argue now that “the language of the law says…subsidies are only available for states that set up state exchanges.” But the idea that subsidies might be withheld was never articulated by anyone during the congressional debate, nor in the months after the law’s passage—even when states began to signal they would not operate their own exchanges. Instead, the same Republicans who endorse the lawsuit now were passing laws and making statements that affirmed the idea that subsidies would be available in all states. Statements from legislators and state officials that back up the plaintiff’s version of legislative history were made only after the implications of that ambiguous phrase in the ACA began to circulate around right-wing thought shops like the American Enterprise Institute and the Cato Institute.

If Congress did intend to use the subsidies as an incentive for states to set up their own exchanges, the fact that many state officials were clueless about the possible loss of tax credits is perplexing. None of the states “had reason to believe that choosing a federally facilitated exchange would alter so fundamental a feature of the ACA as the availability of tax credits,” reads a brief filed last week by nearly two dozen attorneys general representing red and blue states alike. “Nothing in the ACA provided clear notice of that risk, and retroactively imposing such a new condition now would upend the bargain the states thought they had struck,” it continues. The Washington Post’s Greg Sargent spoke with a number of Republican state officials involved in the implementation of the ACA who confirmed that the possibility of losing subsidies was never part of discussions about whether or not to set up state exchanges.

The court could strike a blow against the ACA without fully accepting the strained version of history offered by the challengers. But as legal scholar Linda Greenhouse describes in The New York Times, doing so would require the justices to set aside their own principles and precedents. “The court has permitted itself to be recruited into the front lines of a partisan war. Not only the Affordable Care Act but the court itself is in peril as a result,” Greenhouse writes. “To reject the government’s defense of the law, the justices would have to suspend their own settled approach to statutory interpretation as well as their often-stated view of how Congress should act toward the states.”

It’s tempting to dismiss the lawsuit as a deeply silly partisan attack, akin to the House GOP’s repeated votes for repeal. Its basis may indeed be fluff. And yet it’s entirely possible that it will be this absurd case—not sabotage by Republicans at the state level; not lawsuits challenging the law on its constitutional merits—that dooms the signature achievement of the Obama years, at an immense human cost.