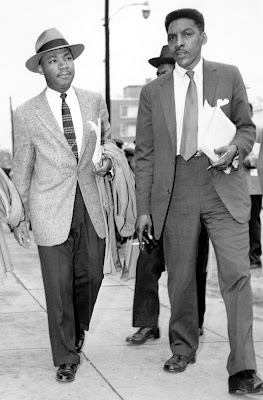 At Sotomayor’s confirmation hearings senators are debating the relative merit of empathy as a professional attribute of a Supreme Court justice. Republicans spent Monday morning arguing that empathy impedes the cool rationality to which justices should aspire, while Democrats argued that empathy improves judicial decisions because it allows judges to imagine the full impact of their choices.

Whether or not empathy impedes or facilitates jurisprudence may be up for debate, but the importance of empathy for social justice movements seems obvious.

The effectiveness of the mid-century Civil Rights Movement rested on generating empathy among fair-minded whites appalled by the brutal mistreatment of black citizens in the South. One reason that Dr. Martin Luther King, Jr. targeted Birmingham, Alabama was his expectation that police chief Bull Connor’s violent overreaction to protestors would elicit national empathy for the cause of civil rights and full equality. King’s Letter from a Birmingham Jail is a classic political treatise calling on the empathetic impulses of white church leaders.

This history of politics and empathy was violated by the SCLC this week. The Southern Christian Leadership Conference (SCLC), an organization founded and led by Dr. King, is considering dismissing the president of its Los Angeles chapter because of his vocal opposition to Proposition 8. During the 2008 election the SCLC officially took a neutral position with regards to California’s Proposition 8, which stripped gay men and lesbians of the right to marry. With his national organization silent on the issue, Los Angeles SCLC chapter president Rev. Eric P. Lee worked hard to oppose the measure. In a display of political empathy Lee explained "it was clear to me that any time you deny one group of people the same right that other groups have that is a clear violation of civil rights and I have to speak up on that."

Now Reverend Lee has been summoned by the SCLC’s national board to explain his advocacy on behalf of marriage equality or face being removed from his position.

There are so many things wrong with this. At moments like this I wish I were a snarky comedian, political cartoonist, or smart satirist rather than simply a college professor. Somehow those media seem better suited to capturing the ridiculousness of the SCLC’s behavior. But let me try.

Simply put a national civil rights organization that takes a "neutral position" on an issue of basic civil rights does not deserve to exist. Whatever the personal beliefs and prejudices of individual leaders of the SCLC, the organization’s mission as a "nonprofit, non-sectarian, inter-faith, advocacy organization that is committed to non-violent action to achieve social, economic, and political justice" requires that it stand forcefully against efforts to impose second class citizenship on an entire group simply because of identity.

In my view, the failure of the SCLC as a national organization to defend the dignity and equality of LGBT families disqualifies it as a civil rights organization.

The SCLC cloaks its support for inequality in religious rhetoric. I often hear the argument that religious African Americans are somehow required to be homophobic and to oppose marriage equality because of their deep commitment to Christian doctrine, practice, and belief. But this ignores that the primary distinguishing characteristic of African American Christianity is its rejection of oppressive biblical interpretation in favor of embracing a liberating and loving God. White enslavers used substantial biblical evidence to assert that God condoned slavery and required their meek submission to it.

But black people rejected this chapter-and-verse Christian perspective and instead embraced a more holistic Christian narrative centered on a God who loved all God’s children equally, even if the text sometimes suggested otherwise. There is no reason why a people with this libratory religious heritage must submit to reactionary, oppressive leadership on same sex marriage. Empathy should remind us that we know better.

Homophobic black clergy do not speak for the entire black Christian community. Though they receive dramatically less media attention, many African-American religious leaders, like Reverend Lee in Los Angeles, are encouraging acceptance and inclusion in their congregations and communities. African-American Christians have long resisted readings of the Bible that exclude and oppress. Enslaved blacks were admonished to "obey their masters" but they believed the story of Moses leading his people from bondage. Jim Crow religion told black people to be silent about oppression because the "meek shall inherit the earth," but Reverend Martin Luther King, Jr. called for "justice to run down like waters and righteousness as a mighty and ever-flowing stream."

At Sotomayor’s hearing on Monday many Republicans senators engaged in deliberate forgetfulness about American history. They spoke of the Constitution as though it is an infallible document and of American history as though it were a pristine narrative of equality. The SCLC seems to also have forgotten the complexity of its history. They behave as though they don’t remember that the architect of 1963 March on Washington was Bayard Rustin, an openly gay black man whose fierce pacifism and commitment to non-violence is the very basis of King’s strategy. Without Rustin there is no March on Washington, no sustained nonviolent movement in the South, and therefore no 1964 Civil Rights Act and no 1965 Voting Rights Act.

Bayard Rustin in all his gay, brilliant, brave, blackness is a cornerstone of the SCLC. Virulent opposition to marriage equality defames the memory of their own son. This is not only about empathy; it is about self-knowledge.

Dr. Martin Luther King, Jr. wrote from a Birmingham jail to express his grave disappointment in his fellow clergy because they failed to support the struggle for equal rights and human dignity. But even King failed in the issue of fairness and equality for gay men and lesbians. King ultimately caved to the anti-gay impulse of his day and distanced himself from Rustin; shunning the man who’d trained and supported him. But the SCLC can do better than that today. They can finally fulfill King’s demand for justice and bring to fruition the broadest vision of beloved community.

Civil Rights organizations whose traditional role has been addressing racial inequality must be equally vigilant about advancing LGBT rights. Our history demands a politics of empathy.