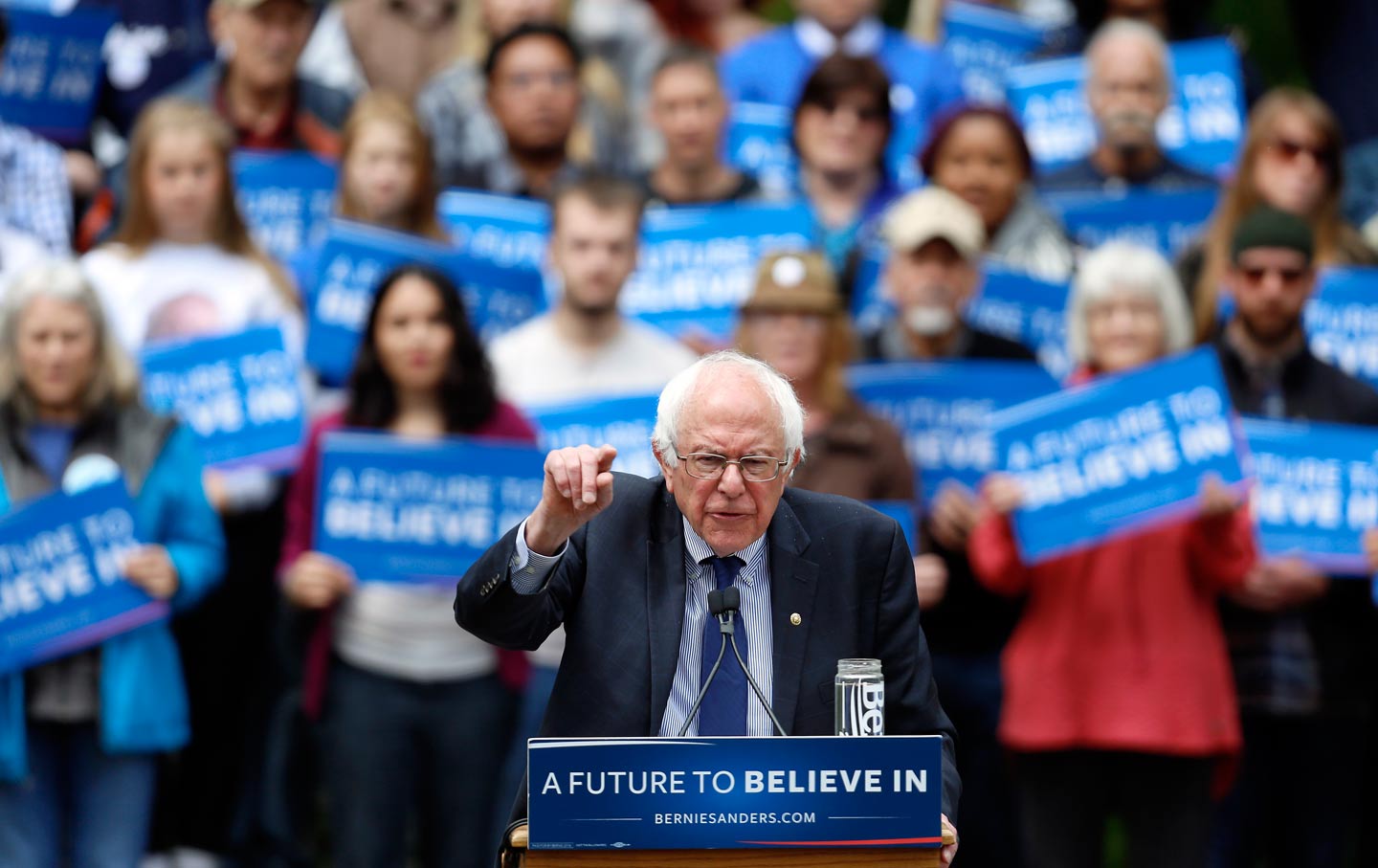 As he continues to campaign for Democratic primary votes from Indiana to Oregon, Bernie Sanders has begun to detail a vision for where the movement that has developed to support his candidacy might move the Democratic Party.

After winning only the Rhode Island primary on a Tuesday that saw front-runner Hillary Clinton win Pennsylvania, Maryland, Delaware, and Connecticut—and, with those wins, a substantial boost in her delegate-race advantage—the Vermont senator released a primary-night statement that anticipated a way forward even if he does not win the party’s nomination at the Democratic National Convention in Philadelphia.

Sanders made it clear that his campaign—which has won 18 contests and 1,355 delegates and has the potential to win more primaries and delegates—would go on. “The people in every state in this country should have the right to determine who they want as president and what the agenda of the Democratic Party should be. That’s why we are in this race until the last vote is cast,” said the senator. Then he offered a framework for how that campaign might influence the direction not just of the party but of politics in the years to come. “[This] campaign,” said Sanders, “is going to the Democratic National Convention in Philadelphia with as many delegates as possible to fight for a progressive party platform that calls for a $15 an hour minimum wage, an end to our disastrous trade policies, a Medicare-for-all health care system, breaking up Wall Street financial institutions, ending fracking in our country, making public colleges and universities tuition free and passing a carbon tax so we can effectively address the planetary crisis of climate change.”

Sanders has expanded on these themes on the campaign trail in recent days, in appearances in the key primary states of Indiana (which votes on May 3) and Oregon (which votes on May 17). On Wednesday, Sanders drew a cheering crowd of 2,200 people to a town-hall meeting on the campus of Purdue University, where he added new material to the stump speech he has delivered from the start of a presidential run that has challenged Clinton and the Democratic Party to move left on a host of issues.

“Let me make this clear, so there is no confusion: We are in this campaign to win, and become the Democratic nominee,” Sanders told the students in Indiana. “We are in this campaign to win, but if we do not win, we intend to win every delegate that we can so that when we go to Philadelphia in July, we are going to have the votes to put together the strongest progressive agenda that any political party has ever seen.”

On Thursday in Eugene, Oregon, and again on Friday at the Indiana statehouse, where he rallied with steelworkers whose plants are threatened with closure as part of a corporate relocation to Mexico, Sanders made trade policy central to his demand for a new politics that champions working families over CEOs.

Bernie Sanders says he and his delegates will “fight for a progressive party platform.”

“The Democratic Party, up to now, has not been clear about which side they are on, on the major issues facing this country. You cannot be on the side of those workers who have lost their jobs, because of disastrous trade agreements, and support those corporations who have thrown millions of our workers out on the street,” Sanders told the crowd of 8,000 in Oregon.

“The Democratic Party has to reach a fundamental conclusion: Are we on the side of working people or big money interests?” the senator thundered. “Do we stand with the elderly, the children, the sick and the poor or Wall Street speculators and the drug companies and the insurance companies?”

Political and media elites, whose default position is to focus on the horse race (and the personalities associated with it), are quick to dismiss fights over agendas and platforms. With no sense of history, they imagine politics as little more than a progression from one dominant figure to the next. Movements, and the political trends and progressions that extend from movement-oriented campaigns, are invariably dismissed.

This is not 1968. The issues are different and the political processes are different. Conventions are more managed. And parties have come to see their quadrennial gatherings less as opportunities to frame their own future and that of the country and more as marketing moments.

“Issues are negotiable. We could not afford to avoid raising the right questions.” — the Rev. Jesse Jackson

But 2016 is the most volatile political year since 1968. And the responses of the parties to it will define not just political organizations but the politics of this year and the years to come.

So what Bernie Sanders is talking about matters. It does not mean that he will get what he wants at the convention. It does not mean that Hillary Clinton, who has her own vision and her own strategies, should accept every proposal that Sanders or broader movements make. There are no guarantees that the Democratic Party can or will run in 2016 on “the strongest progressive agenda that any political party has ever seen.”

But no one should buy into the fantasy that this discussion is inconsequential. Platform debates always matter. That’s why the candidates (front-runners and challengers) always take them seriously; that’s why key players in political parties (governor, mayors, legislators, union leaders) participate in them; that’s why interest groups try so hard to influence them.

Platforms define parties, not just for the purposes of a campaign but for the future. It mattered when the Democratic Party embraced civil rights in a meaningful way in 1948, and in a more meaningful way in 1960 and 1964. It mattered in the 1980s when the Democratic Party moved (at the behest of the Rev. Jesse Jackson and his “Rainbow Coalition” campaigns) toward more aggressive opposition to South African apartheid, and when it moved (at the behest of the Jackson and Gary Hart campaigns of 1984) toward an embrace of the principle that the United States should work with allies rather than engage in unilateral military action. It mattered when the Democratic Party began to embrace LGBTQ rights in a meaningful way in its 1980 platform, and when it embraced marriage equality in 2012.

And it matters, now, that Sanders is talking about “put[ting] together the strongest progressive agenda that any political party has ever seen.”

“We could afford to lose the vote,” explained the Rev. Jesse Jackson, after waging critical platform fights in 1984. “Issues are negotiable. We could not afford to avoid raising the right questions. Our self-respect and our moral integrity were at stake. Our heads are perhaps bloody, but unbowed. Our back is straight and our vision is clear.”

What was true three decades ago remains true now: Platform fights on issues of conscience and consequence, inspired by insurgent campaigns and insurgent movements, are always worth waging.