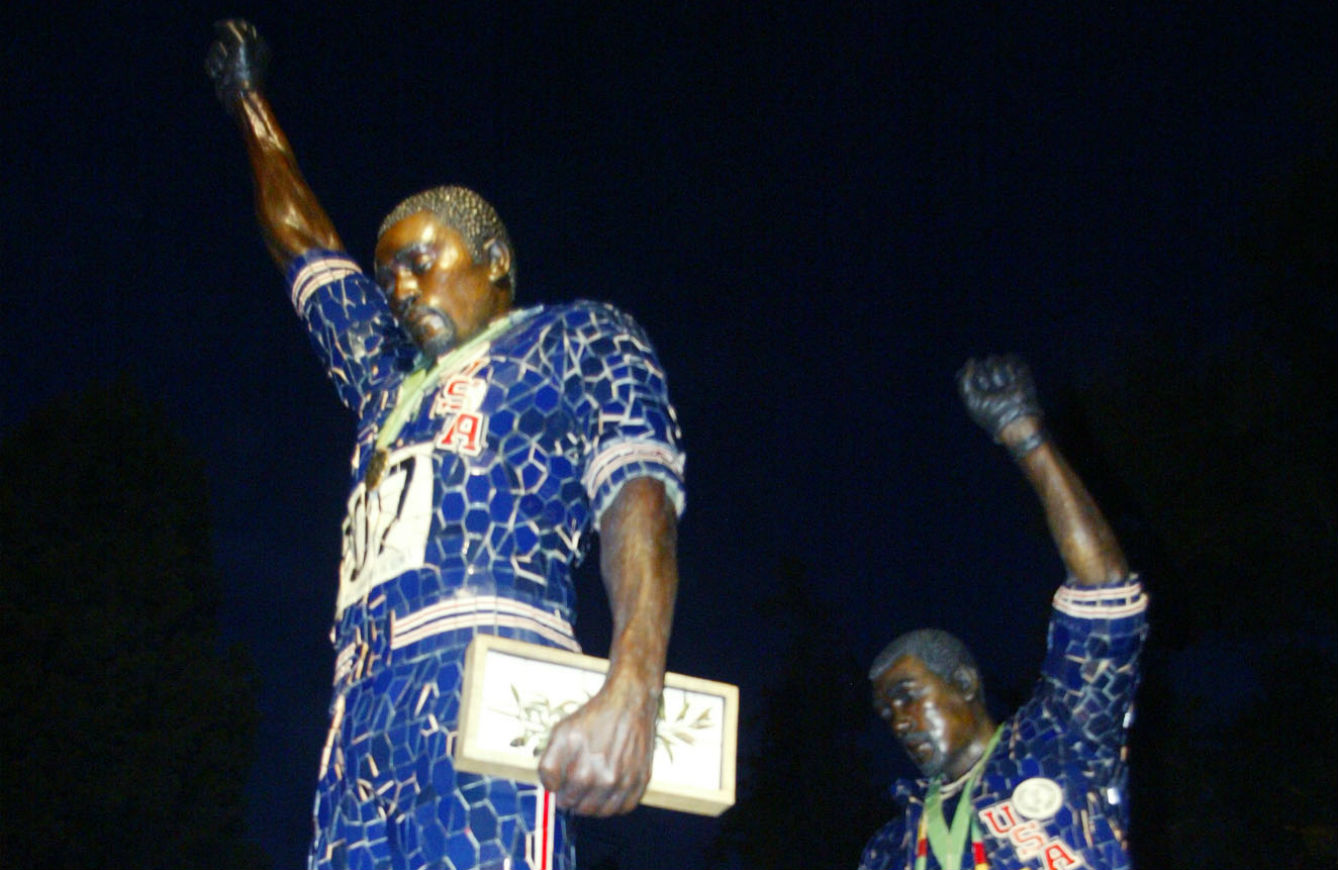 Protests and raised fists have come to life to San Jose State University. For those who have not heard, three white students at San Jose State University have been charged with hate crimes—and a fourth has been suspended—after their African-American roommate was subjected to a series of racist torments that have shocked the entire community. The young man, whose name has not been revealed, had a heavy U-shaped bike lock put around his neck, had racial slurs and swastikas scrawled on dry-erase boards placed around the room and was renamed by the students with whom he was forced to live as “three-fifths” or “fraction”, after the Compromise of 1787, which deemed slaves to be three-fifths of a human being.

At SJSU, there is outrage that a school, which was the incubator of the black athletes’ revolt in the 1960s, could be a place where such a crime could occur. There is also frustration that residential assistants were conscious enough of the situation to ask the alleged tormentors to take a Confederate flag off their door but did not alert anyone in the administration that their black roommate might be in trouble. Then there are doubts that the administration would have even taken it seriously, or whether it all would have been covered up if not for the dogged reporting of the San Jose Mercury News. After the attacks, student leaders asked school president Mo Qayoumi to discuss what could be done. Instead, he chose to keep his commitments at a science and engineering conference in Wisconsin. Students have also gone public with complaints that they cannot get a sit-down with the man about what happened. “This president, unlike the six or seven presidents I’ve seen at SJSU, has the most top-down management style,” Jonathan Karpf, an anthropology lecturer said to the San Jose Mercury News. “He’s not somebody who handles dissent very effectively.”

Now there are students marching with their fists raised like the statue of 1968 Olympic protesters John Carlos and Tommie Smith at the center of their campus.

But if people had been listening, then Ron Davis could have told them that was not only possible but even inevitable. Ron Davis was hired to coach the cross-country team in 2012. But he was more than just another coach. In November of 1962, Ron Davis ran cross-country for San Jose State as part of the first integrated team to win the Division I championship. He was also the student assistant for the 1969 team that won the NCAA Outdoor Track and Field Championship. Davis was at the heart of the era that saw people like Dr. Harry Edwards, Tommie Smith, Lee Evans and John Carlos make history at the school. Over the next four decades, Davis coached around the world from Canada and Ireland to Mozambique and Nigeria, as well as in colleges across the United States. Here is what the interim athletic director Marie Tuite, said upon hiring Mr. Davis. “He’s a great Spartan. He has such an affection for San Jose State. It’s really an honor for him to recruit young men and women to this university.”

This job was supposed to be a great homecoming and the culmination of a remarkable career. Instead, after one season, one last-place finish (in line with the previous year’s performance), and the hiring of a new athletic director, Ron Davis was not reappointed. He is now suing the school for discrimination, saying that the school draped in civil rights history fired him because of the color of his skin. The school was not content to merely dismiss Mr. Davis. They humiliated him out the door, with written evaluations that mocked his intelligence and his communication abilities, and tried to make this man who had been coaching for over forty years sound like an incompetent.

I was able to get in touch with Mr. Davis, and he e-mailed me the following note.

As a San Jose State University graduate, hall of fame member, and member of the first “integrated” team to win the NCAA National Cross Country Championship I am appalled that such a deplorable racist attack occurred. I appreciated your article last week on the racist attack at San Jose State last week. It exposed the truth about what has been happening at San Jose State regarding on going social injustice to students and faculty. What they practice and what they convey to the community is a dishonor to the statue of Dr. John Carlos and Dr. Tommie Smith who were advocates of human rights. Why did it take so long for the terrorism and humiliation experienced by the Black student to be reported and acted on by the San Jose State Administration?

This question is going to need to be answered. But questions about how administrators handled—or didn’t handle—the racist incident is inextricable from how a school like San Jose State could so casually disrespect its own history by treating Ron Davis so poorly. Using your history only as public relations, and not as a call to arms to build an institution anchored by principles of anti-racism, can no longer cut it. It is no different from Cal Berkeley in 2011 boasting about its history of dissent on its website, while having students tear-gassed in the quad. The 1968 Olympic protests are not a brand. Students are saying that if you are going to be the home for this statue, you need to earn that right every day.

Editors' Note: This post originally stated that unnamed student suffering abuse had a "bike chain" placed around his neck.  We have now corrected this to reflect that it was actually a significantly heavier U-shaped bike lock.