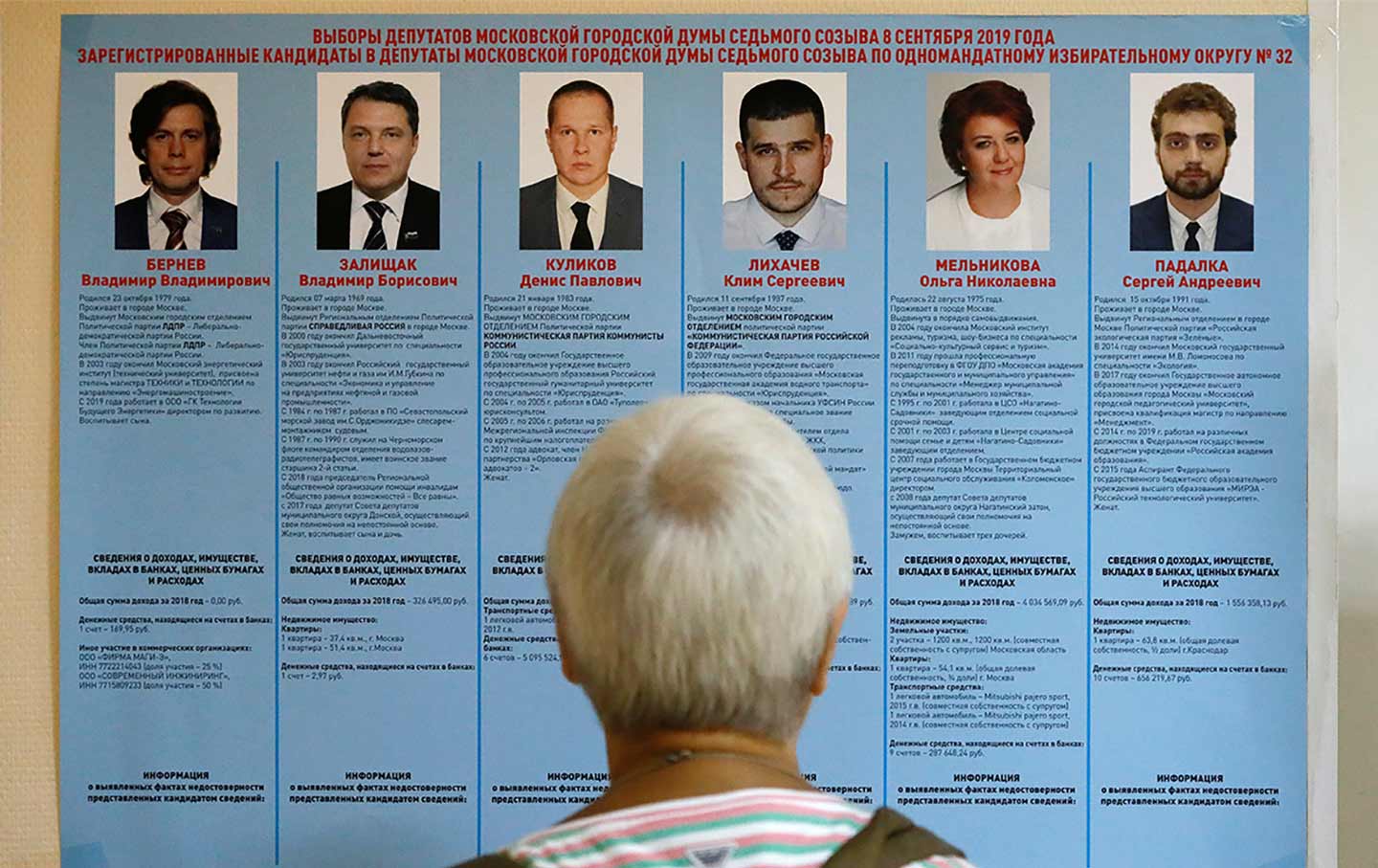 “The liberals are returning,” “Moscow Said No,” “Victory.” These were some of the headlines in the independent Russian media about the election results to the Moscow City Duma on September 8 that challenged the position of United Russia, “the party of Putin’s power,” for the first time in many years. The party lost 13 seats, and now 20 of 45 seats belong to opposition parties—the Communist Party (13), Yabloko (four—for the first time in 10 years), and Just Russia (three). This resembles the composition of the federal State Duma in the 1990s. Of course, in those days “inconvenient” candidates were not put in jail and demonstrators were not clubbed by police or given long sentences for crimes they did not commit—as they are now.

Alexey Navalny, the leader of the “nonsystemic opposition,” who was not allowed to run, considers this result a success for his strategy of “smart voting.” People were sent texts on their mobile phones with the names of candidates from various opposition groups who had a chance to win in their districts.

Yet Navalny’s opponents in the opposition ranks think that citizens were simply fed up with lawlessness and “smart voting” had no effect on the turnout: Like last time, no more than 22 percent of the voters showed up in 2019. It should be noted that the makeup of the Moscow City Duma, whose powers have been strongly reduced, even compared to other regions, is unlikely to affect the allocation of the gigantic city budget. (The Nation wrote about this in August: Of the almost 4 trillion rubles, a third ends up in the pockets of companies close to the mayor’s office, according to Boris Kagarlitsky and other candidates.) Nevertheless, the elections and surrounding events were an important sign of the current political moment and its prospects. Not only are the results important, so is the attitude of the public, which is changing, albeit slowly and reluctantly.

Democracy Without Women Is Not Democracy

On September 8, more than 6,000 elections and referendums were also held on various levels throughout the country. In 16 regions with gubernatorial elections, the acting governors appointed by the regime won. The most dramatic situation was in St. Petersburg, where civil society was opposed to the acting governor. However, opposition candidates refused to run. Observers attribute this to administrative pressure by the Kremlin.

All kinds of election-related violations were noted in the country, from false ballots to trolling and “black PR” against independent and opposition deputies, physical attacks, and even illegal arrests. Many organized groups of military personnel and workers in state-funded professions were told how to vote. These are all familiar tactics. As a result, the “party of power” won virtually everywhere, with a few exceptions.

Yet a small but growing part of the population (and voters) is beginning to understand that everyday problems and what outrages them are best resolved through political participation.

The recent protests focused more on ethical problems and would likely not form an organized movement that could develop a political agenda, said Lev Gudkov, head of the Levada Center polling group, at a meeting at the Memorial Foundation in Moscow. That is true.

The wave of protests that has engulfed all of Russia in recent months, from the Far North to the mountains of the Caucasus, focused on ecological problems in the broad and narrow sense—from the issue of garbage dumps and pension problems to the restoration of schools and hospitals in villages. In that sense, the protests in Moscow are the logical extension of the protests against a rubbish dump in Shiyes, Arkhangelsk, and polluting Lake Baikal; it is about the ecology of the environment, and the politics as well. It’s important to note, too, that people who are used to choosing everyday things—food, drink, schools, cars, and vacations—reasonably assume that they can choose those who will solve the issues of their neighborhood and region and the city budget. This is a fundamental change for former Soviets. They have not yet reached the level of engaging in political activism, but they are potentially ready to take more responsibility for what happens.

This summer, according to the Levada Center, the number of people who supported the protests was greater than the number of people who were skeptical about them. This does not mean everyone will go to a protest rally tomorrow, but it defines a change in perception. The regime did not pay enough attention to this change—and the election results reflect that.

Of course, Moscow is not all of Russia. Still, the events of this summer, beginning with the false charges against journalist Ivan Golunov that brought tens of thousands of people into the streets in outrage, continued during August 27 and September 3 protests that saw the beating of women and children and the arrest of six men who were summarily given 20 years in prison for crimes they did not commit. The most serious real offense was an attempt to remove the mask of an armed policeman.

The new popular figures are the candidates who were not allowed to register to run: Lubov Sobol, Ilya Yashin, Egor Zhukov, and the university student blogger Konstantin Kotov, who was given four years in prison on the eve of the elections for violating laws concerning the staging of protests.

At a Yabloko party briefing, the party’s leader, Grigory Yavlinsky, said that after the results of the Moscow elections were made public, the Yabloko’s first task in the Moscow parliament would be to fight for the freedom of political prisoners.

There is also skepticism about the election results. “Of course, the regime lost the Moscow elections,” said Boris Kagarlitsky, a Fair Russia candidate, leftist writer, and sociologist. “The electorate did not support it. But the left lost, too. First of all, because there was such a low turnout. ‘Smart voting’ did not mobilize people, it brought in no more than 10 percent—approximately as much as the regime lost. ‘Smart voting’ is not the way out, it is an instruction manual for those who do not think or for robots—you get a text, you mark your ballot, your thought process is not involved.… Yes, we have new faces as a result—but who are they? Some not only have no experience, but have not marked individuality.”

Kagarlitsky came in third in his district, behind a Communist and the mayor’s office puppet.

Both Kagarlitsky and the Yabloko leaders are sounding an alarm: It is important not to lose what they have achieved and to unite in coalition to find solutions to important issues. Historically, this is not something Russian opposition politicians have done well.

The transitional and fragile election results of September 8 are a reminder that the Russian opposition must learn from the past three decades and build those coalitions that will strengthen their forces.