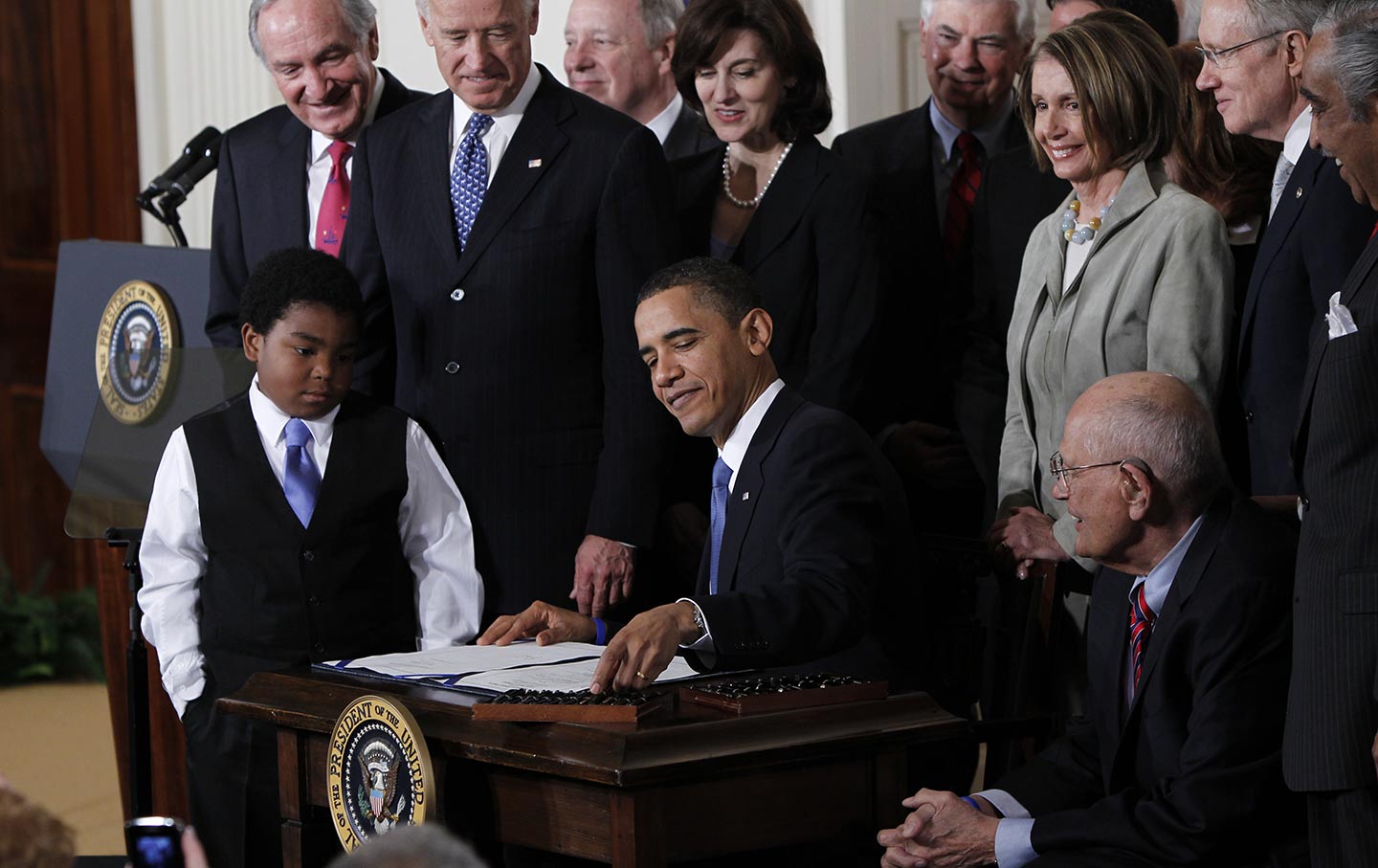 If you confine yourself to the Congressional Record, you would assume that Republicans methodically followed their game plan to dismantle Obamacare in the first week of the new session. The Senate passed the first phase of their repeal bill under a process called reconciliation, a budget procedure that requires only a simple majority in the Senate, without opportunity for filibuster. The Senate should wrap up in the coming weeks with a “vote-a-rama” (where Senators vote on all amendments consecutively for hours on end) and a final vote, and the finished product will move to the House, for likely passage days after Donald Trump’s inauguration.

But Republicans spent more time firming up the process of repeal than on the substance of the bill, which thus far includes no detail on what will be repealed or when, or what will eventually replace the current system. It’s like they practiced how to walk down the aisle over and over without knowing whether they will say “I do.”

This absence of detail has created a vacuum, filled with fear and infighting and jockeying for position. Hard-liners and moderates are consumed with the timeline for delay. But Tom Cotton became the first senator to publicly oppose repeal without a replacement, echoing the sentiments of others in private. Meanwhile, polling for “repeal and delay” is horrendous. And any replacement will have to contend with furious lobbying from insurers and major medical groups.

Furthermore, familiar politics are already tripping up the process. Republicans really want to eliminate Obamacare’s taxes on high-income households, insurance companies, and medical-device manufacturers; repeal should actually be seen as a tax-cut bill in the short-term. But Rand Paul’s concerns about the deficit led him to oppose the bill, and while he has failed to rally conservatives to his side thus far, money for a replacement will likely have to come from somewhere to appease the budget hawks. Separately, in a funhouse-mirror echo of the Stupak amendment, House Republicans want to include defunding of Planned Parenthood in the repeal, like the dry-run repeal bill did last year. But Susan Collins and Lisa Murkowski have threatened to fight such a measure, making Senate passage less likely. And that’s just the beginning of the knock-down, drag-out fights to come over every line of a replacement bill.

What this shows is that Obamacare really did alter the social contract in America. For all its faults—and they are considerable—Obamacare created an expectation of a definitive federal role in health-care markets. It’s untenable to simply return to a pre-2010 status quo; nobody outside of Iowa lunatic Steve King is calling for that. The public now expects that the government must provide assistance in making health-care markets work, in a way that they didn’t expect a decade ago. The public sees Obamacare as a benchmark, and any service below it will not be tolerated.

And Republicans are actively aiming low. While making public promises that nobody will lose their coverage from repeal, they have conceded that they cannot cover as many Americans as Obamacare with anything they would approve, preferring to use the term “universal access.” The one thing Republicans cannot overturn in reconciliation is the pre-existing condition exclusion, but they can allow insurers to price the stickiest applicants out of the market. This will necessarily create incentives to cherry-pick customers, and leave millions on the sidelines. The types of executive actions Trump could take for an “orderly resolution” of Obamacare all militate toward denying coverage by reducing mandatory insurance benefits and restricting rules on sign-ups.

This wasn’t really a problem in 2004 or 2006. George W. Bush didn’t have a standard to live up to on health care. He simply implemented versions of long-held Republican ideas like tort reform, health savings accounts, and state funding for high-risk pools—the exact same ideas being bandied about today, incidentally. They didn’t succeed in bringing down the uninsured rate or lowering costs. But it didn’t matter. There was no comparison point.

Now Obamacare has become that comparison point. For all the Republican talk of it being a failed experiment in government-run health care, it actually succeeded in institutionalizing a federal role for more than just children, the poor, and the elderly. This is why Bill Kristol famously wrote that memo in the 1990s urging Republicans to fight tooth and nail against Bill Clinton’s health-care reform, because it “would guarantee and likely make permanent an unprecedented federal intrusion into and disruption of the American economy.” Though Obamacare has never achieved the high approval ratings that would seemingly usher in such a guarantee, it did solidify the concept that federal intrusion is necessary. We’re not likely to go back.

Is Obamacare the perfect manifestation of that federal role? No. The subsidies are inadequate and the deductibles are too high, and the combination of consolidation in insurance markets and companies leaving the exchanges has removed the choice and competition thought to be the linchpin to bring down costs. Medicaid expansion has worked well where it has been taken up, but the exchanges are running on fumes. Nobody in the Democratic presidential primary argued for keeping the system the same; the choice was between minor or radical overhaul. Allowing customers to buy into Medicare, using all-payer rate setting to control provider costs, and federalizing Medicaid should be ideas returning to the table if and when Republican policies prove inadequate.

The debate over health care for the next decade will feature both sides trying to live up to a promise made with the American people in 2008. There are a panoply of ideas on how to extend insurance coverage to make it both affordable and useful. The party in power is scrambling to come up with ideas they can live with. The party out of power is fighting among themselves over which ideas will work best. But the biggest political risk lies in going backwards. That’s a new reality in health care that can be exploited.

Listen to David Dayen discuss the fight to save Obamacare on the Start Making Sense podcast.