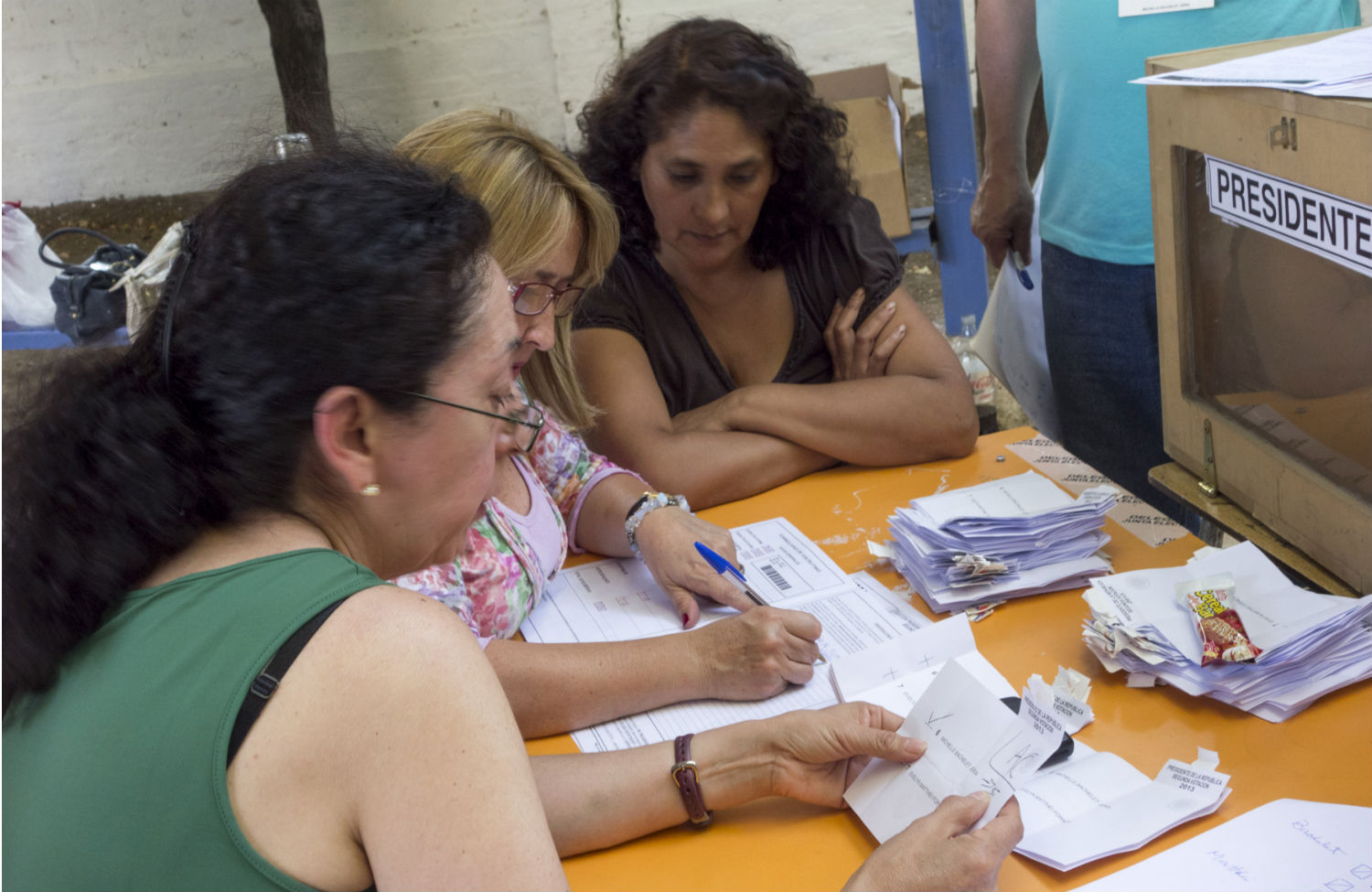 Volunteers count votes at a polling location in Santiago during the 2013 presidential election. (Courtesy of Lorie Novak)

When Chileans poured into the streets on December 15 to celebrate Michelle Bachelet’s landslide victory in the presidential run-off election, vendors popped up out of nowhere, peddling flags to wave at the victory rally: Myriad purple or blue options hailing “Michelle Presidenta!” and “Chile de todos”; a big red one for the Communist Party proclaiming “100 años de lucha”; the bright multicolored banner of the indigenous Mapuche people. There were two Socialist options—one commemorating the iconic musician Víctor Jara, murdered in the first days of the Pinochet coup of 1973, another promising that “the dream of Allende lives!” and quoting the overthrown president’s famous last speech, in which he promised that the streets would one day again be filled with free people building a better society. And here they were: thousands cheering president-elect Bachelet as she acknowledged Chileans’ decision to address the nation’s “unfinished business” and “begin deep transformations.” Soledad Falabella, director of ESE:O, an NGO promoting democratic literacy, and a professor at the University of Chile, looked up at the sea of flags and soaked in the jubilation. “At last,” she said, “the chains of Pinochet are broken.”

Nearly a quarter of a century has passed since Chile’s return to democracy, but this election—and, especially, the movements that burst into the streets in 2011 and made Bachelet’s progressive platform possible—represent the paradigm shift that genuine democracy requires, activists say. Nothing has heralded this change more resoundingly than Marca tu Voto AC, a citizens’s mobilization that took shape around the elections, calling on voters to write the letters that stand for Constituent Assembly onto their paper ballots, thereby demanding a participatory process for creating a new constitution. The campaign has been remarkably effective as both direct and symbolic action.

Chile’s constitution dates from the Pinochet years and was engineered not only to guarantee ever-lasting disproportionate power to the right but also to entrench neoliberal economic policies, and even to prevent legislative changes to them. Though the constitution has been revised many times over the last two decades—patched up with more than 200 amendments, according to the Chilean legal scholar and Rutgers law professor Jorge Contesse—its internal mechanisms, established by the “technocrats of the dictatorship,” he explains, “prevent channels for the majority to express itself or for just laws to be passed.” Chief among its obstacles to genuine democracy is the unique binomial system of elections: for congressional seats, candidates from multiple parties typically run in each district, and the two highest vote-getters win office, which almost always means high representation for the minority right-wing parties.

But some of the less obvious impediments to democracy are now fully on the agenda, too, thanks to the social movements of the last couple of years among students, environmentalists and residents of the provinces, which brought mass demonstrations into the streets for the first time since the restoration of democracy in 1990. The inequities for which these movements have been demanding redress are tied to provisions in the constitution.

As Contesse explains, “The junta wrote all those lofty words” in the constitution’s Article 19, affirming Chileans’ right to equality, freedom of expression, privacy and so on, “but didn’t put any mechanisms in place to guarantee them except for economic liberties”—rights to choose which school to send one’s kids to, which doctor to see, where to invest one’s pension, but no right to have an education, healthcare or pension. In other words, he says, freedom “for those who can afford it.”

From its inception, Pinochet’s reign of terror was bound up with free-market fundamentalism as instituted by the “Chicago Boys”—the Chilean economists who studied with Milton Friedman at the University of Chicago and served under Pinochet to undo regulation, welcome speculative finance, slash social spending and privatize nearly everything. As early as 1976, Allende’s exiled foreign minister Orlando Letelier argued in this magazine that “repression for the majorities and ‘economic freedom’ for small privileged groups are in Chile two sides of the same coin.” (A month later, in Washington, DC, Letelier was assassinated by a car bomb masterminded by the Chilean secret police.)

The return to democracy certainly pried off the weight of the political repression, but free-market absolutism remained embedded in the constitution. Despite apparent signs of economic health, Chileans have been struggling. Per capita income may have grown from around $4,500 in 1990 to $20,000 in 2013, but largely because the massive wealth concentrated at the top has pulled up the average. Chile has, by far, the widest income gap of the thirty-four countries that make up the Organization for Economic Co-operation and Development (which includes the United States) and the third-highest poverty rate (despite low unemployment numbers.) Retirees have been joining the ranks of the poor as their privatized social security funds have evaporated; expensive tuition has shut out all but the wealthy from advanced education.

Giving Bachelet more than 62 percent of the vote, Chileans roundly rejected the economic model sustained by the outgoing president, Sebastián Piñera—and worshipped by Bachelet’s electoral opponent, Evelyn Matthei. The president-elect, returning with a more radical agenda to the office she held from 2006 to 2010, promised to raise corporate taxes from 20 percent (among the lowest in the region) to 25 percent and to use the revenue to guarantee free education. “Profit cannot be the engine of education because education is not a commodity,” she proclaimed in her victory speech, echoing the mass student movement, four of whose radical young leaders were just elected to Congress. “Dreams are not traded on the market.”

That movement, which won the support of older generations who joined the students in the streets, drew the connection between their exorbitant tuitions and the inequities built into the constitution. Inspired by the arguments of the legal scholar Fernando Atria, who has written about the “tricky” or “crooked” constitution, “they were not fighting just about education,” says Javiera Parada, an organizer with Marca tu Voto (and an actor and theater producer by profession). “They were talking about the economic and political model. This is a big change for Chileans.”

The genius of Marca tu Voto was to strengthen that connection and, by producing a citizen’s referendum, to enact the democratic process it was demanding.

With less than a year of organizing through social media as well as the old but never-rusty tool of knocking on doors, the effort drew thousands of volunteers to spread the word and to serve as ballot counters in Chile’s polling stations, where votes are still recorded and tallied by hand. In the first round of elections in November (when Bachelet did not quite win a majority in a field of nine candidates, many of them considerably to her left), Marca Tu Voto placed trained counters in some 36 percent of polling places, according to Parada, and by the run-off on December 15, they had covered about 80 percent of the country’s voting stations, including nearly all the ones in populous Santiago and Valparaíso. Despite some false warnings from the right that ballots with extraneous marks would be declared invalid, more than 10 percent of voters inscribed those initials—an astonishing number for any write-in campaign. Meanwhile, a September/October survey by Chile’s leading pollsters, Centro de Estudios Públicos, showed 45 percent of the population supporting a constituent assembly.

Since then, the number has likely skyrocketed as the issue has been thrust onto the popular agenda. As the attorney and legal anthropologist Antonia Rivas, who was organizing for Marca tu Voto on Easter Island, puts it, the topic was at best marginal two years ago and is now dominating the discourse. “Even in the most conservative newspapers, even if they are attacking the idea of a constitutional assembly,” she says, “this is what they are talking about.”

That’s what Marca tu Voto intended—to ignite the conversation—and it officially declared itself closed right after election day. But, Parada says, the consciousness-raising campaign “became a social movement, which we weren’t expecting and weren’t prepared for” and now participants are meeting around the country and organizing forums and other public events to debate what should come next. Should they press for a nationwide set of town-hall meetings? A series of congressional hearings featuring representatives of various sectors of society? Some other formation?

About one thing they are certain: they need to keep up the pressure for an approach that will engage the citizenry in a meaningful way and make their opinions binding. While Bachelet, who will take office in March, ran on the promise of constitutional change through a process that would be “democratic, institutional and participatory,” she has not yet proposed any specifics for the procedure, and activists worry that “institutional” may take precedence. Gabriel Boric, one of the student leaders elected to congress, already sees signs pointing toward some kind of joint commission taking charge of the changes and, he says, “I am not willing to support a new constitution drafted by a binomial parliament.” Only a constituent assembly, he says, can overcome the “illegitimacy” of the constitution’s origins.

More than that, Parada sees the process as a necessary means for Chileans to “learn how to live together” in the wake of their traumatic history. Though Bachelet’s coalition, having won in both houses, likely has the votes to push through a progressive document, Parada—whose grandfather was disappeared during the dictatorship and whose father was assassinated in a notoriously gruesome case—doesn’t want the left to impose a political model. To her, that would be acting like the right. “We all need to sit and discuss in a way that hasn’t happened in forty years,” she says. She has begun to do just that on an individual basis, speaking about the past—and the future—with Pinochet supporters. One man who served in the dictatorship confessed that he had not done what he could have to investigate human rights abuses. “We can’t bring people back to life,” she told him, “but we can change the heritage the dictatorship left us: the constitution.”