A monthly gathering of personal enthusiasms and observations about the passing scene, “Field Notes” will, in the tradition of The Nation, draw attention to things overlooked or often misunderstood.

For a landmark arts institution anchored in New York—where the cutting edge often feels like the only edge in town—the Public Theater harbors some wonderfully retro notions about what theater should do. Oskar Eustis, the Public’s artistic director, may be best known for commissioning Angels in America, but his most radical move is a recent one: sending the theater’s Mobile Unit on its recent five-state, 18-city tour through the heartland to perform Lynn Nottage’s Pulitzer Prize–winning Sweat, a traditional theater piece about race and class in Reading, Pennsylvania, as a metal-tubing plant closes and lives are fractured. Most of the action takes place in a local bar as friends experience the loss of every certainty that work bestows, including that of friendship. 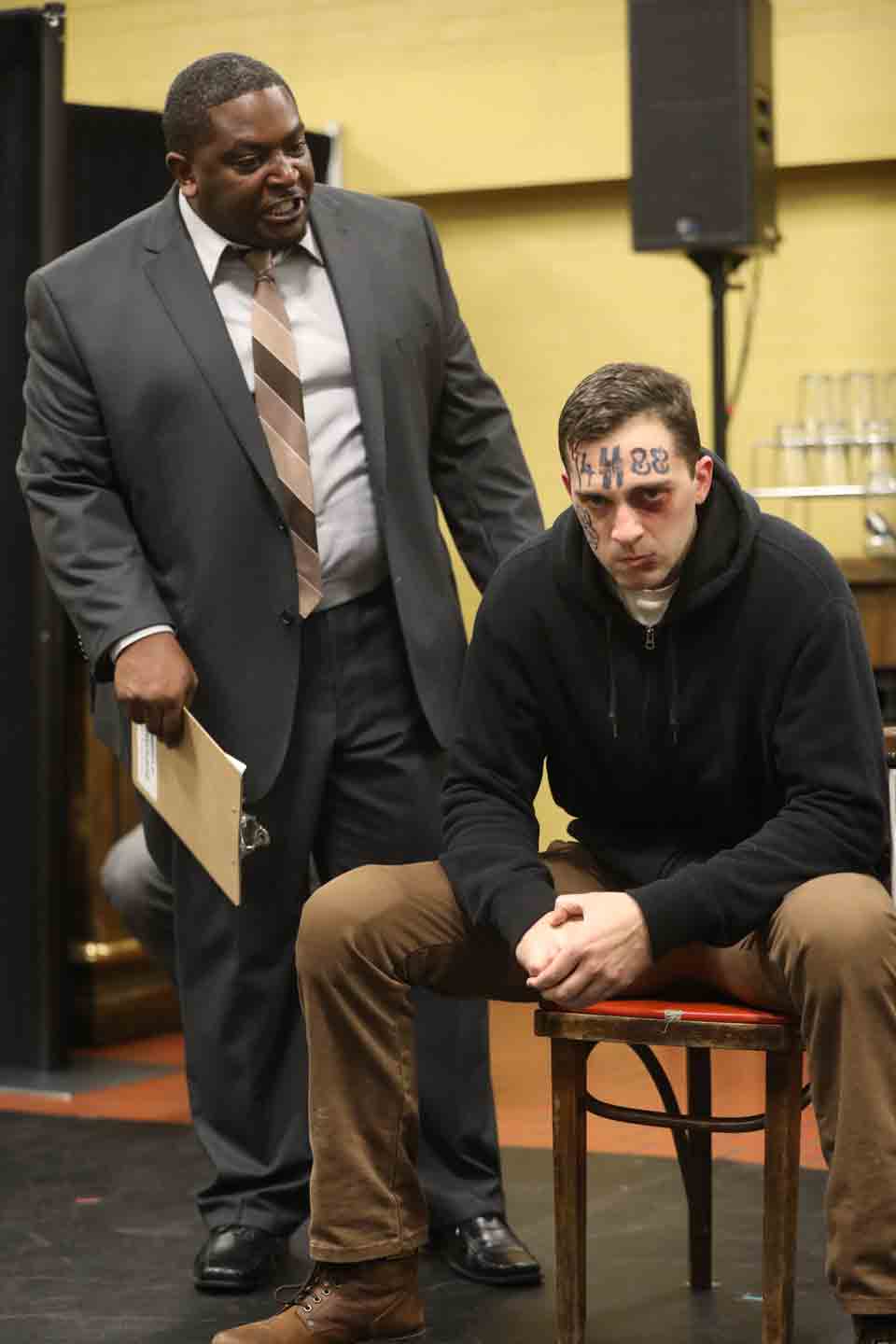 In places like Ashtabula, Ohio; Erie, Pennsylvania; and Albion, Michigan—where the American Dream has run up against American reality—the Mobile Unit has done far more than drop in for an evening of theater. Along with community organizations, public libraries, Rotary clubs, humanities councils, and whoever else is interested, it has encouraged lectures, discussion groups, story circles, and art pieces in the weeks before and after staging a free performance of Sweat. The tour is now over, but the project is not. Eustis tells me they will return (assuming they have the continued support of the Ford and Mellon foundations), launch other regional circuits, partner with local theaters, and commission more plays that do what Nottage’s does: let people, many of whom have never been to a play, see the connection between their lives and the lives of others. Anyone inclined to sniff at this quaint notion should be prepared for an attitude adjustment.

Chiara Klein, the Mobile Unit’s national project leader, spent a year researching these 18 towns and cities, visiting some of them as many as four or five times in search of groups and venues to work with. She describes the whole experience as one of adjustment. She wasn’t on the road long before she got over the notion that Sweat “must be seen by communities that flipped in the 2016 election,” or that the Mobile’s mission was to bring people “the culture they should have.” Instead, she learned to approach communities with the idea of building something together even if that meant, as it did a few times, having people say “we don’t like what you do.”

I met Klein in Kenosha, Wisconsin, where Sweat played at the local headquarters of the United Auto Workers, the once-powerful union that ruled the city until American Motors and Daimler-Chrysler closed all but one of their plants in 1988, putting 5,300 people out of work and blighting the cityscape for years to come. The union-hall venue might seem too obvious for a play about a city where labor is flat on its back, but Sweat has also played to receptive crowds in Minnesota towns with no history of manufacturing and in places as tiny as Hayward, Wisconsin, a town in the rural north where 150 people, both tribal and non-tribal, were as receptive as the audience in Erie, Pennsylvania. That doesn’t surprise Lynn Nottage, who has visited five of the tour cities; people who feel invisible and unheard, she tells me, whether they are black, white, old, young, rural or urban recognize themselves in her play. 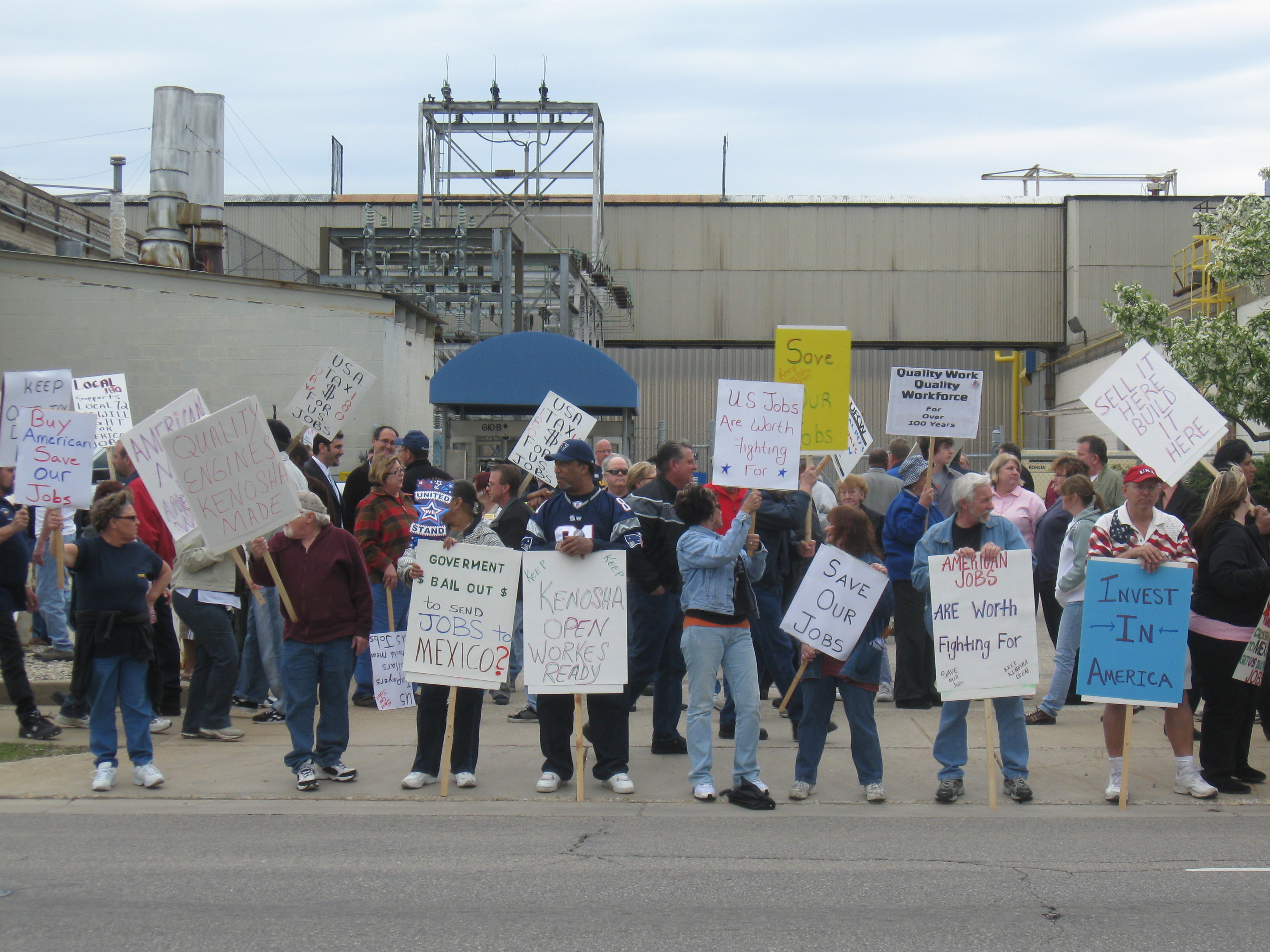 Workers picket to save the Kenosha engine plant. (Flickr)

Nineteen eighty-eight was a long time ago, and Kenosha is now trying to reinvent itself as a bedroom community with easy Amtrak access to both Milwaukee and Chicago. Where the automotive plants once stood along the stretch of Lake Michigan designated as “downtown,” there are now condominiums. It is here that a city of just under 100,000 has carved out a slim, picturesque destination for tourists and commuters with no memory of union cards and picket lines.

Kenosha boosters describe it as harmonious, but this is a divided city where a quiet racism runs deep, as I discovered in conversations with cab drivers, motel staff, and the few people I met along its vast, empty streets of shuttered shops. Some of these people like to recall a better era—the years before the recent arrival of Latinos and blacks from Chicago and Waukegan. Older citizens remember the days when the UAW gave both blacks and whites good-paying jobs with enviable benefits. Things may indeed have been more harmonious once-upon-a-time, but nostalgia, Chiara Klein tells me, has been a theme in almost every city on the Mobile’s tour, gilding the past and deforming a possible future. It’s there in Sweat as well. Tracy, a white worker and union member delivers a long rant about how Reading was “real nice back then” when the work ethic and skilled labor of her German-American family “built this town.” That’s her way of explaining to Oscar, a Colombian-American, why she thinks, and hopes, he has no shot at a plant job. 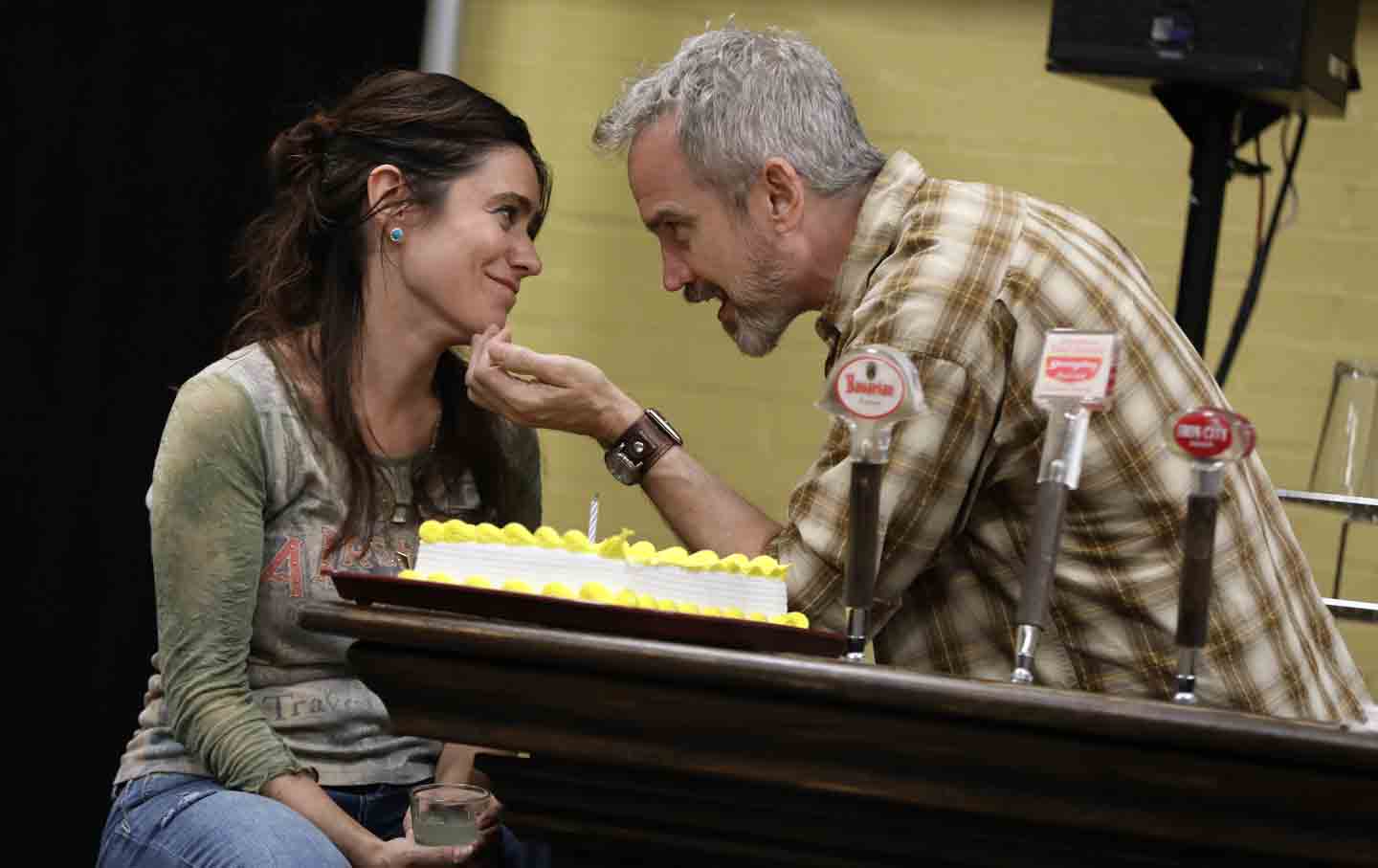 Both the Mobile Unit and its local partners know that most people are just living their lives 99 percent of the time. They may be rural, isolated, and depressed, or urban, jobless, and adrift, but day-by-day they are, like most of us, simply grinding out a life. The challenge is to get them to step away for a moment and see themselves, make new connections, forge a different community. “We want people to see the play with others they wouldn’t ordinarily interact with,” Klein says. “That’s where the magic happens.”

Which brings us to a performance like the one at the UAW hall. If you don’t count retirees, Local 72 has dwindled to only seven active members; its vast hall now hosts a range of community events. The right venue is crucial to attracting the right audience. It would have been easy to draw a hundred commuters and condominium dwellers to nearby Carthage College for a play by the theater company that created Hamilton, Klein says, but “they aren’t the people you necessarily want. They can see it in Chicago.” By performing in high-school gyms, a Masonic temple, a cafeteria, and a food pantry—places that don’t announce the evening as an exclusionary arts event, the Public’s Mobile unit has attracted the people it wants to reach.

Some 200 of them entered the union hall on October 16 and not all of them were white and over 50. A number of older African Americans and some young people of both races were there as well. The Mobile Unit frames the evening to create an atmosphere of mutual regard and goodwill deliberately at odds with that in the play. Chiara greets people as they file in, makes sure there are enough seats, and then delivers a short welcome that aims to dissolve the inevitable hierarchy between performers and audience: We will all be encouraged to talk; there is a birthday onstage and we too will have cake from Oliver’s bakery at intermission. There is a stage here, but the players will not use it. Instead, they will perform in a small space hemmed in by our chairs. It works well for the barroom scenes where friendships are frayed and no one has anywhere to turn. We are in on the action. 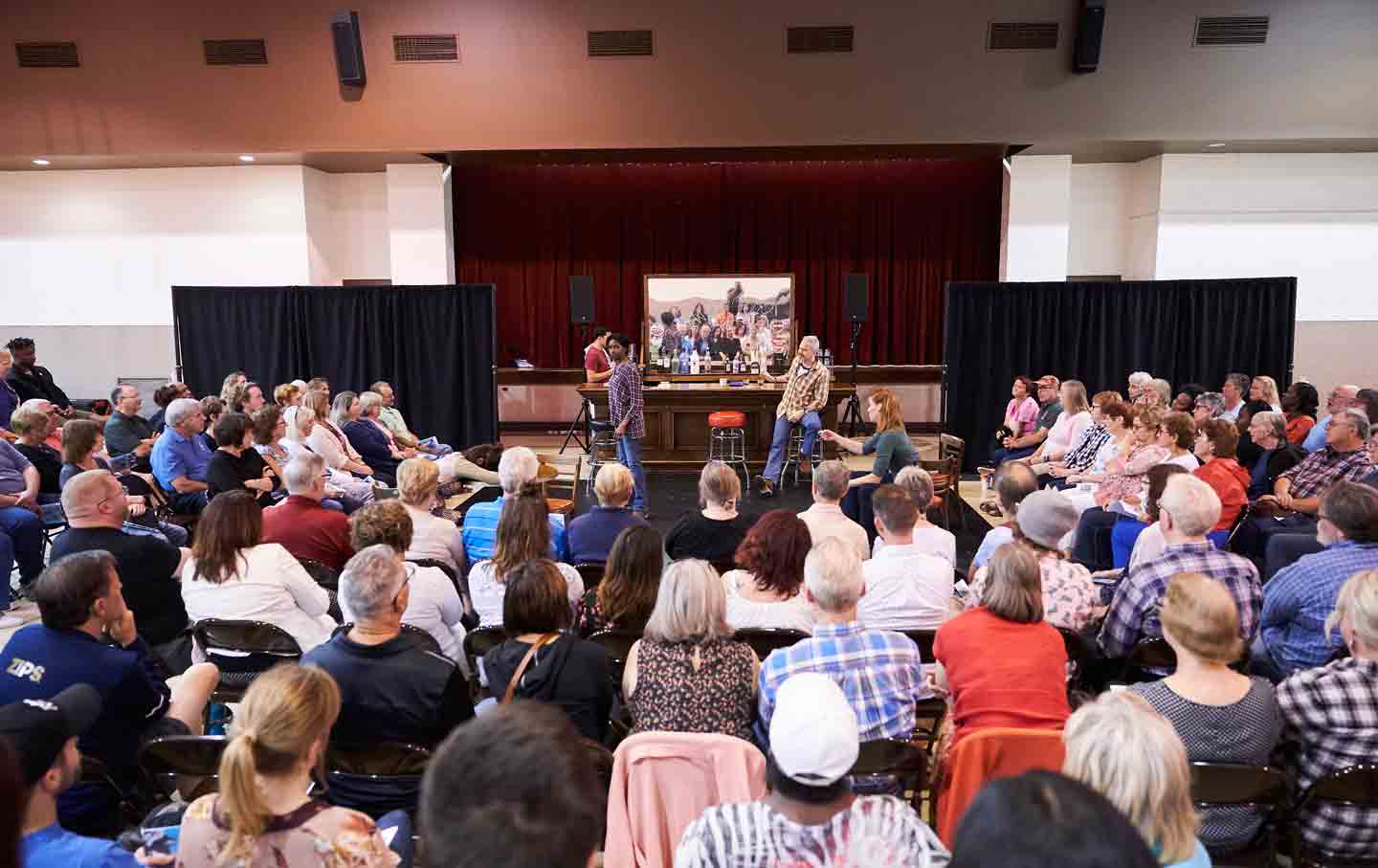 At the play’s end, its uneasy note of hope fades away and the audience is given time to reflect by filling out a questionnaire asking them their ZIP C ode, ethnicity, gender, emotional response to the play, its relevance to their community, and even what media outlets they turn to for news. (The questionnaires are later collected and the cast often reads them aloud to one another after the evening is over. They are saved, along with the film of the evening.) This interlude may be responsible for the candor of the ensuing conversation led by Klein. One African-American woman said she was angered by the sense of entitlement of the white characters; another admitted that she was surprised by her empathy for them. A white woman in her 60s was blunt: “I can relate to the bar scenes where people lost their shit. First there were the closings, then the coming of drugs.” An African-American woman described it this way: “It’s a feeling of being overpowered. A job goes away, a family has to find its way in a new place; then the drugs.” A 21-year-old white man said he saw himself in the characters and cried that he too had no future. Several people responded to the decibel level of anger in the play and saw it as emblematic of how quickly everything now turns to shouting. This was the week following the Kavanaugh hearings. 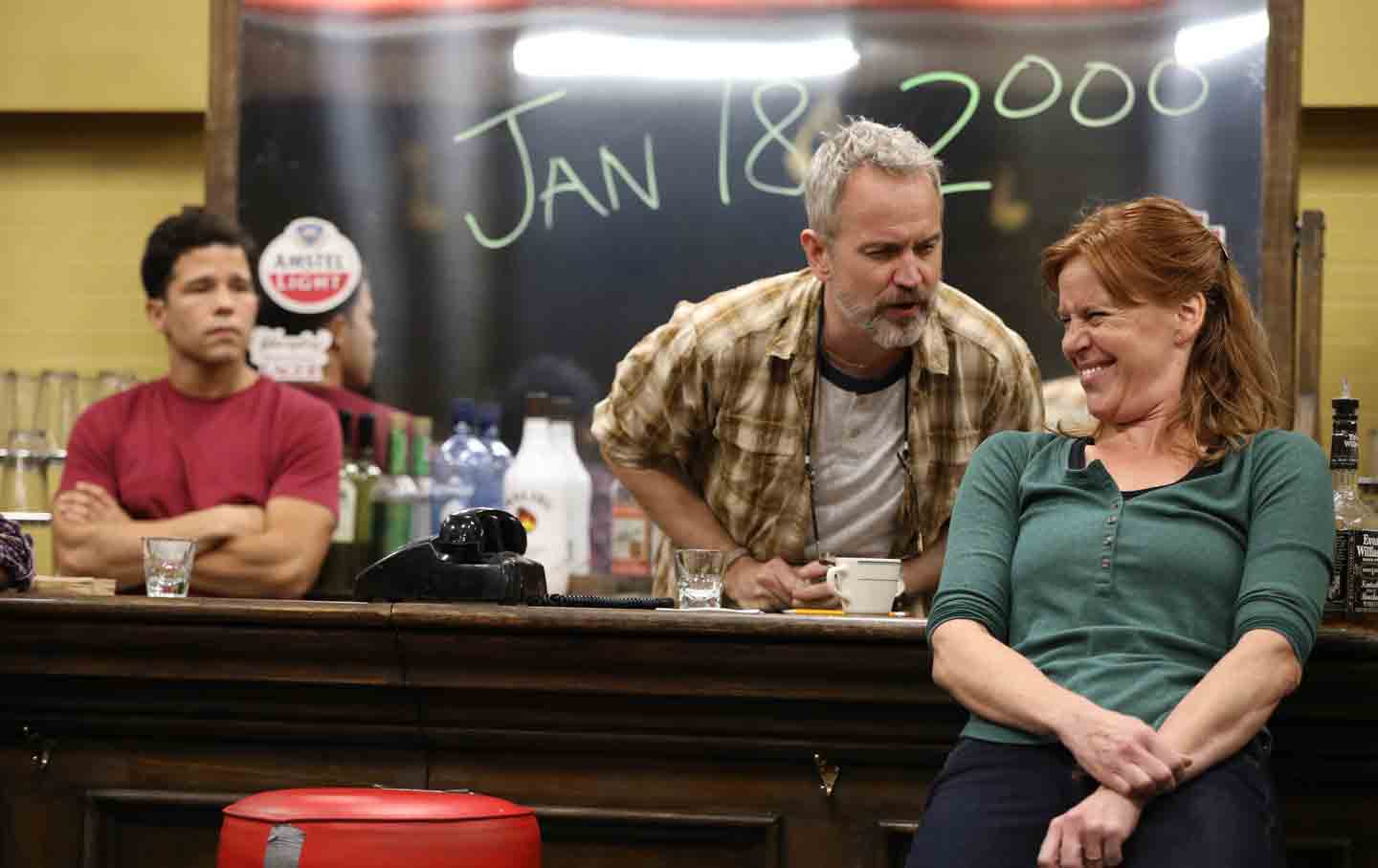 The audience responses varied widely, but they all began the same way: “Thank you for this play.” I know about “Wisconsin-nice”; this was more than that. It was an acknowledgement of a rare opening in the claustrophobic day-to-day, something the Public will try to keep going in all 18 communities in the year to come. Surely this mission was part of what Lynn Nottage had in mind when she prefaced her play with a poem by Langston Hughes that ends like this:

Out of the rack and ruin of our gangster death,
The rape and rot of graft, and stealth, and lies,
We, the people, must redeem
The land, the mines, the plants, the rivers.
The mountains and the endless plain—
All, all the stretch of these great green states—
And make America again!