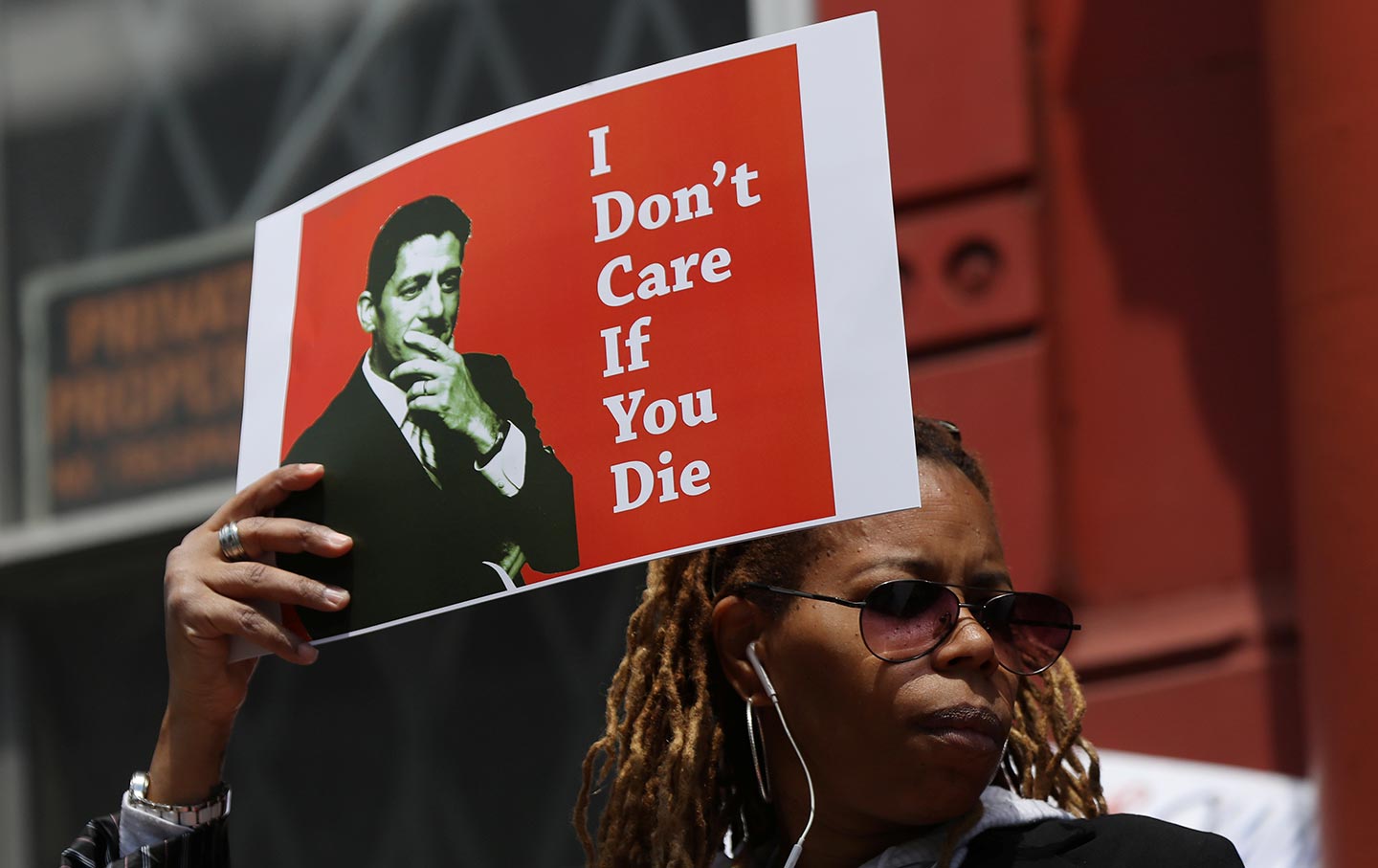 A woman holds up a placard during a protest against Paul Ryan in Harlem, New York City, on May 9, 2017. (Reuters / Shannon Stapleton)

How bad is the Republican rewrite of Obamacare? So bad, apparently, that the GOP candidate for Montana’s lone congressional seat allegedly assaulted a reporter rather than answer a question about it.

Trumpcare is such a mess that a GOP candidate allegedly assaulted a reporter rather than answer a question about it.

On Wednesday evening, Guardian reporter Ben Jacobs asked the candidate, Greg Gianforte, for his reaction to an analysis of the American Health Care Act released earlier Wednesday by the Congressional Budget Office, which indicated that 23 million fewer Americans would be insured in the next decade. It was a valid question: Health care is one of the most contentious topics in Montana’s special election, and Gianforte had previously declined to take a position on the AHCA until the CBO score came out. Instead of answering, Gianforte lost it. According to an account from a Fox News team that was in the room, “Gianforte grabbed Jacobs by the neck with both hands and slammed him into the ground behind him,” and then “began punching the reporter.” (You can listen to the altercation here.)

The incident perfectly illustrates the corner that Republicans have backed themselves into with Trumpcare. For months, President Trump, House Speaker Paul Ryan, and other GOP leaders have promised not only to repeal Obamacare but to replace it with something that will lower premiums, increase access, and preserve Obamacare’s popular protections for people with preexisting conditions. Several analyses indicated Trumpcare fell fall short by these measures, but Republicans insisted their critics were wrong. In early May, House Republicans jammed through an amended version before the nonpartisan CBO had a chance to crunch the numbers. Then they celebrated with a party in the Rose Garden.

According to the CBO’s analysis, one-sixth of the population could face increasingly unstable insurance markets.

With the CBO score out now, it’s harder for Republicans to evade questions about the impact of their plan. (Though body slamming a reporter is an… interesting way to try.) The picture painted by the new analysis is ugly: Much like the original version of the AHCA, which was pulled in March after it failed to get enough support, the bill penalizes elderly, poor, and sick Americans in exchange for lower premiums for the young and healthy, and a large tax cut for the wealthy. Some 23 million fewer people would be insured over the next decade, more than half of those because of an $800 billion gouge to Medicaid. Some low-income elderly people could see their premiums go up by 800 percent. Treatment for substance abuse and maternity care could cost thousands of dollars more in out-of-pocket costs. An estimated one-sixth of the population would face increasingly unstable insurance markets.

The most significant impact of Trumpcare 2.0, when compared to the original version, is that it makes insurance markets even less predictable. The amended version of the AHCA allows states to do away with some of the consumer protections established by Obamacare—including the rule preventing insurers from charging more to people with preexisting conditions, and standards for “Essential Health Benefits” that all insurance plans must cover. As a result of these changes, the CBO predicts, “Premiums would vary significantly according to health status and the types of benefits provided, and less healthy people would face extremely high premiums, despite the additional funding that would be available…to help reduce premiums.” Millions of people would be priced out of the insurance market, while “a few million” more might end up with policies so skimpy that they “would not provide enough financial protection in the event of a serious and costly illness to be considered insurance.”

Republicans cannot feign surprise at this analysis, as it essentially conforms to previous projections. It suggests that when Paul Ryan claimed in April that “people will be better off with preexisting conditions under our plan,” he was, quite simply, lying. So was Trump when he said just weeks ago this month that the legislation “will be every bit as good on preexisting conditions as Obamacare.” It’s telling that even before the CBO score came out many of Ryan’s colleagues all but given up any idea of selling their bill to the public. Only a handful of House members who voted for the AHCA held town-hall meetings during the recess immediately following the vote. Senate Republicans have expressed ambivalence about the House legislation as they work on their own version.

Ryan tried to put a positive spin on the CBO’s figures, claiming they confirm that the AHCA will lower premiums and reduce the deficit. Technically, that’s true—but premiums will be lower because they’ll cover fewer services, and because older, sicker people will get priced out of the market, lowering costs for everyone who remains. And only about 10 percent of the savings go towards deficit reduction; the rest finances $874 billion in tax cuts. Ryan might still make a case for the AHCA on these dubious merits. He could even argue that pulling the rug out from sick and elderly people is really a worthwhile trade for letting the rich keep more of their tax dollars. But that’s not the health-care plan GOP leaders repeatedly promised to deliver.