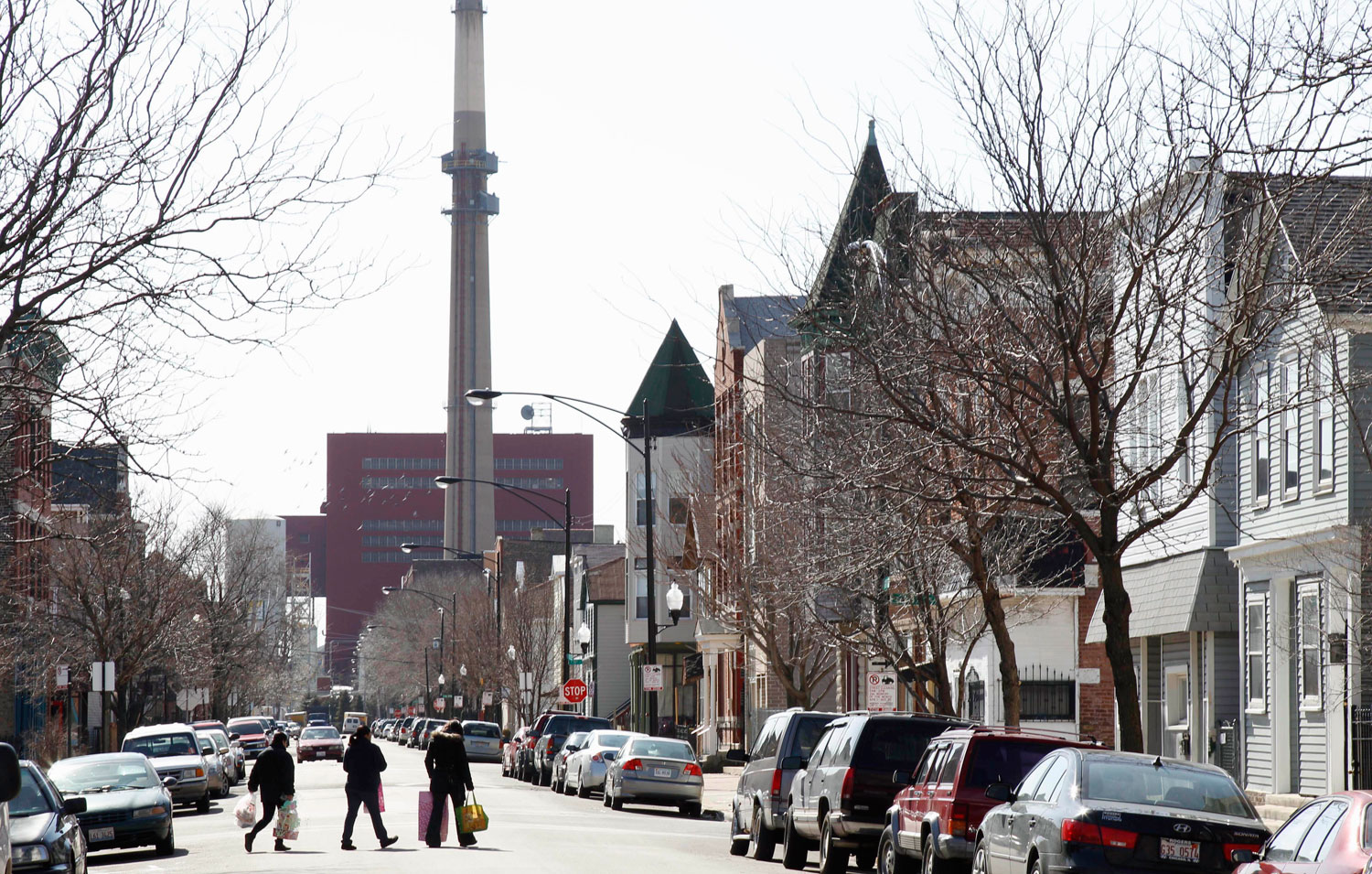 Sixty-eight percent of African-Americans live within thirty miles of a coal-fired power plant, the zone of maximum exposure to pollutants that cause an array of ailments, from heart disease to birth defects. Communities of color breathe in nearly 40 percent more polluted air than whites. African-American children are three times as likely to suffer an asthma attack.

The NAACP launched its Climate Justice Initiative address the stark numbers head on. Working in conjunction with Little Village Environmental Justice Organization and Indigenous Environmental Network, the Initiative published “Coal-Blooded: Putting Profits Before People” in 2012, which evaluated the impact of 378 coal-fired power plants on communities along racial and economic lines. “Just Energy Policies: Reducing Pollution and Creating Jobs,” released in December, looked at the energy policies of all fifty states through a civil rights lens.

We spoke with Jacqueline Patterson, executive director of the NAACP’s Climate Justice Initiative, about her organization’s work. (This interview has been condensed and edited for clarity.)

Why did the NAACP launch the Climate Justice Initiative?

The NAACP launched the CJI because of a recognition of the impact both of climate change itself and how it disproportionately impacts marginalized communities, low-income communities and communities of color. We looked at how climate change violates the civil rights of those communities, whether it’s because of pre-existing vulnerabilities in the impact of disasters or whether its the redevelopment process and how lots of time and resource allocation is cut along political lines and folks are already disenfranchised. The actual drivers of climate change, whether its roadway pollution or traffic vehicles or if its polluted facilities like coal plants, are disproportionately affecting communities of color and low-income communities.

As your organization reports, 68 percent of African-Americans live within thirty miles of a coal-fired power plant. That’s pretty stark. How did we get here?

Civil rights isn’t usually one of the first things that come up in discussions about climate change. Why is that?

Clearly, traditional environmental analysis and messaging around climate change has dominated the airwaves. There are more resources for the Sierra Club and National Wildlife Federation, not to mention folks like Al Gore. With those groups, their focus is on glaciers, flora, fauna and wildlife. That has been the focus of climate change, historically.

When you’re marginalized in one way, you’re marginalized in many ways. The voices of frontline communities, the ones that are most impacted, usually don’t make it to the airwaves. That’s starting to change. Showtime is doing that series, Years of Living Dangerously. When I watch the news, all these different folks were talking about climate change and they were talking about it from a human impact angle. Whether it’s the polar vortex or these storms or wildfires or droughts or flooding or the landslide, all these events are impacting real people, so we’re seeing real dialogue around it.

What has been the significance of environmental disasters, such as Hurricane Katrina, in elevating the climate justice angle?

Your research deals a lot with how climate policy impacts the health of communities of color. Want to talk a little about that?

I will say that the lack of climate policy is affecting health in communities of color. We are making some progress with the rules that are going to be introduced in June for existing coal-fired power plants and the carbon rules that were introduced last year for proposed coal-fired power plants. Just lessening the carbon in the atmosphere will save lives and prevent people from being harmed or sickened by the various impacts of climate change. There’s also the mercury and air toxics rule, which came out years ago, but is just now coming into enforcement. It’s a rule that addresses co-pollutants that come from these facilities, not just carbon dioxide. The same facilities that are driving climate change are also sickening communities with mercury, arsenic, lead and other things being emitted. So, policies that are comprehensive that look at all the ways these facilities are harming communities are important as well.

What we need to be looking at now is being much more aggressive around our emissions targets. We need to face the fact that climate change is here now and we need to pour public money into strengthening community resilience to the impact of climate change. There needs to be more funding for FEMA to do advanced forecasting and planning. Resources need to go to frontline communities so they’re in control of designing and implementing their own resilience plans. We need to think seriously, not just about disasters, which tend to get the most visibility, but also sea level rise and how we’re going to make sure communities are prepared for the waters that are going to overtaking land in parts of Louisiana, Alaska and places in between. But also, before that water overtakes the land and forces people to move, we need to deal with the fact that even right now, as we saw with Superstorm Sandy, storm surges resulting from sea-level rise is making any regular storm seem more intense. We need to be taking all of this into account in our local planning and our resources need to follow that.

We need to make sure that we are building a political system that is more inclusive. Currently, whether its Congress or the courts or the zoning board or the rural electric co-ops or the public utilities commissions, there is underrepresentation for communities that are most impacted by the decisions all of these decision-making bodies make. From litigation to adaptation, we need to make sure we have inclusive bodies that represent the voices of the people as these decisions are being made.

Your work explores the importance of making sure benefits from clean energy are equitable and reach communities of color. Could you talk a little bit about that?

We talked earlier about how 68 percent of African-Americans live within thirty miles of a coal-fired power plant and other frontline communities, such as indigenous Native American communities and Latino communities, are also right in the smog zones of these facilities. Just transitioning to a more energy-efficient economy and clean energy economy would benefit those communities in terms of having clean air to breathe, clean water to drink and clean land to live on. In addition to that, we also want to make sure that those communities are in decision-making spaces as we develop this economy, as well as revenue-generating positions. African-Americans spent $41 million on energy in 2009, but only 1 percent of African-Americans were in energy jobs and less than 1 percent of revenue in the energy sector was earned by African-Americans. Whatever room there is for estimation on either side of those statistics, they’re still fairly stark in saying not only are we being negatively impacted by the current fossil-fuel dominated portfolio, we’re also not even benefiting from the revenue or jobs in that sector, nor are we in positions of being able to have input in how those sectors advance and roll out.

As we transition to a new-energy economy, we need frontline communities, not just communities of color but also low-income communities, to be working in decision-making and revenue-generating positions within the industry.

Obviously your organization is part of this, but how do we get people of color excited and engaged in discussions about climate change?

Communities across the country are already organizing themselves to talk about this—whether its the Eastern Michigan Environmental Action Council in Detroit or the Asia Pacific Environmental Network in the Bay Area—they’re really coming together to talk about, not just the direct impact of climate change but how we need a holistic approach to how we organize our communities and political and economic systems. So we are having, at a local level, conversations about what we want for our communities and how this connects to a bigger picture. We’re talking about how we can be agents of change for our communities and how to connect to the greater landscape.

Read more of The Nation’s special #MyClimateToo coverage:
Mark Hertsgaard: Why TheNation.com Today Is All About Climate
Christopher Hayes: The New Abolitionism
Naomi Klein: The Change Within: The Obstacles We Face Are Not Just External
Dani McClain: The ‘Environmentalists’ Who Scapegoat Immigrants and Women on Climate Change
Mychal Denzel Smith: Racial and Environmental Justice Are Two Sides of the Same Coin
Katrina vanden Heuvel: Earth Day’s Founding Father
Wen Stephenson: Let This Earth Day Be The Last
Katha Pollitt: Climate Change is the Tragedy of the Global Commons
Michelle Goldberg: Fighting Despair to Fight Climate Change
George Zornick: We’re the Fossil Fuel Industry’s Cheap Date
Dan Zegart: Want to Stop Climate Change? Take the Fossil Fuel Industry to Court
Jeremy Brecher: ‘Jobs vs. the Environment’: How to Counter the Divisive Big Lie
Jon Wiener: Elizabeth Kolbert on Species Extinction and Climate Change
Dave Zirin: Brazil’s World Cup Will Kick the Environment in the Teeth
Steven Hsieh: People of Color Are Already Getting Hit the Hardest by Climate Change
John Nichols: If Rick Weiland Can Say “No” to Keystone, So Can Barack Obama
Michelle Chen: Where Have All the Green Jobs Gone?
Peter Rothberg: Why I’m Not Totally Bummed Out This Earth Day
Leslie Savan: This Is My Brain on Paper Towels