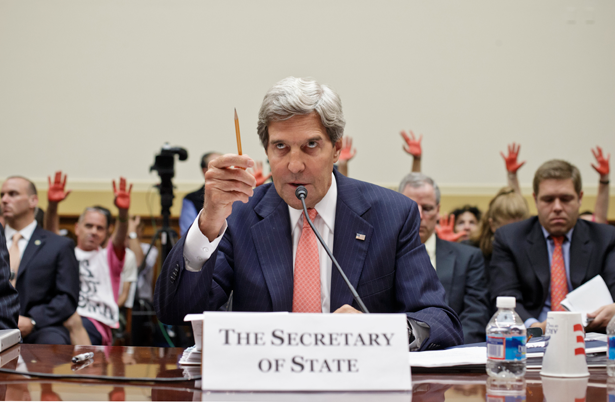 What John Kerry did this week in Egypt and Saudi Arabia is nothing short of despicable. He, and the president who appointed him, managed to honor both a vicious military dictatorship and a totalitarian medieval monarchy as examples of progress toward a more democratic Middle East, as if neither stood in contradiction to professed US objectives for the region.

This was all part of a “road map” to democracy “being carried out to the best of our perception,” Kerry intoned, apparently embracing the calumny that the destruction of representative government in Egypt was always the American plan.

Kerry’s perception did not extend to the court farce the next day when Egypt’s duly elected president, Mohamed Morsi, held incommunicado for four months and denied access to his lawyers, was put on trial on accusations of causing violence among protesters in the streets, violence that paled in comparison to the deliberate killing of civilians by an Egyptian military trained and financed by the government Kerry represents.

Indeed, the Obama administration has refused to categorize the Egyptian military’s overthrow of the Morsi government as a coup, for fear that would automatically trigger the legal requirement of a cutoff of most of the $1.5 billion in annual aid to the Egyptian military. Kerry was at great pains to assure Egyptian reporters that even the temporary hold on some weapons that the US had implemented was not intended to penalize the Egyptian military for destroying Egypt’s experiment in democracy.

“It is not a punishment,” Kerry said. “It’s a reflection of policy in the United States under our law.” Drat that law that says we should not be rewarding military dictators who jail freely elected presidents.

At the moment Morsi was denouncing “this criminal military coup” from his courtroom cage, Kerry was off in Saudi Arabia paying tribute to “a true relationship between friends [that] is based on sincerity, candor and frankness, rather than mere courtesy.” But not so frank that Kerry would answer questions concerning the recent protest by Saudi women attempting to obtain the right to drive a car. Certainly never so frank as to get to the bottom of why this great US ally funded the most virulent anti-American Islamic fanatics throughout the world; was one of only three nations to recognize the Taliban-run government of Afghanistan when it harbored Al Qaeda as it directed terrorist attacks aimed at the United States; and was home country of fifteen of the nineteen hijackers who attacked America on 9/11 as well as bin Laden, their leader.

If there is logic to the US position, it clearly has nothing to do with the stated goals of American policy to prevent terrorist attacks on the United States while somehow advancing human rights as a means of creating a more stable, peaceful world. Were that this government’s objective, Kerry would not have traveled to Saudi Arabia to assure the monarchy that the US still favors the Saudi-financed opposition in Syria that includes a considerable contingent of fighters the American intelligence agencies have labeled as Islamic terrorists. Nor would he now embrace a deeply corrupt military oligarchy in Egypt that can continue to enjoy the perks of its disproportionate power only by denying political freedom to the people of Egypt.

There is nothing new in this ugly embrace of the dark side of Mideast life. Cynicism of purpose and contempt for the well-being of most of the region’s inhabitants have underscored centuries of Western imperial intrusion, and the current US example is of that pattern. Indeed, the backdrop issue driving the current drama, the role of Iran, has its origins in past Western machinations when the US overthrew Mohammad Mossadegh, the last freely elected leader of Iran, when he was threatening to nationalize Western oil interests.

In Saudi Arabia, Kerry said that President Obama had dispatched him to assure the monarchy that the United States remained committed to protect the Royal Kingdom against external threats. That presumed threat refers to Iran, and Kerry is out to assuage Saudi, Egyptian and, most important, Israeli fears that peace might break out between Iran and the United States. Sadly Israel, which long has cultivated an image as providing the only democratic presence in the region, favored the coup in Iran, as it has this year in Egypt, preferring the security of totalitarian regimes to those that might be more responsive to popular sentiment, including support for the human rights of occupied Palestinians.

The problem with this all too familiar game is that it has consequences that at some point will spiral out of control. The entire region desperately needs modernization for its stability or the eruptions of violence that have affected the world will become ever more commonplace. But modernization without representation is a contradiction all too long apparent in this most tempestuous region. That is the sad consequence of the imprisonment of Morsi, who was elected with more than 50 percent of the vote of Egyptians, and the US acceptance of the military that ousted him along with the Saudi royalty who detest everything that is post feudal in the country’s culture.

John Kerry, despite his democratic pretense, has sent a message to the disenfranchised of the Muslim world that the call for representative democracy on the part of the United States is nothing more than a public relations gimmick.