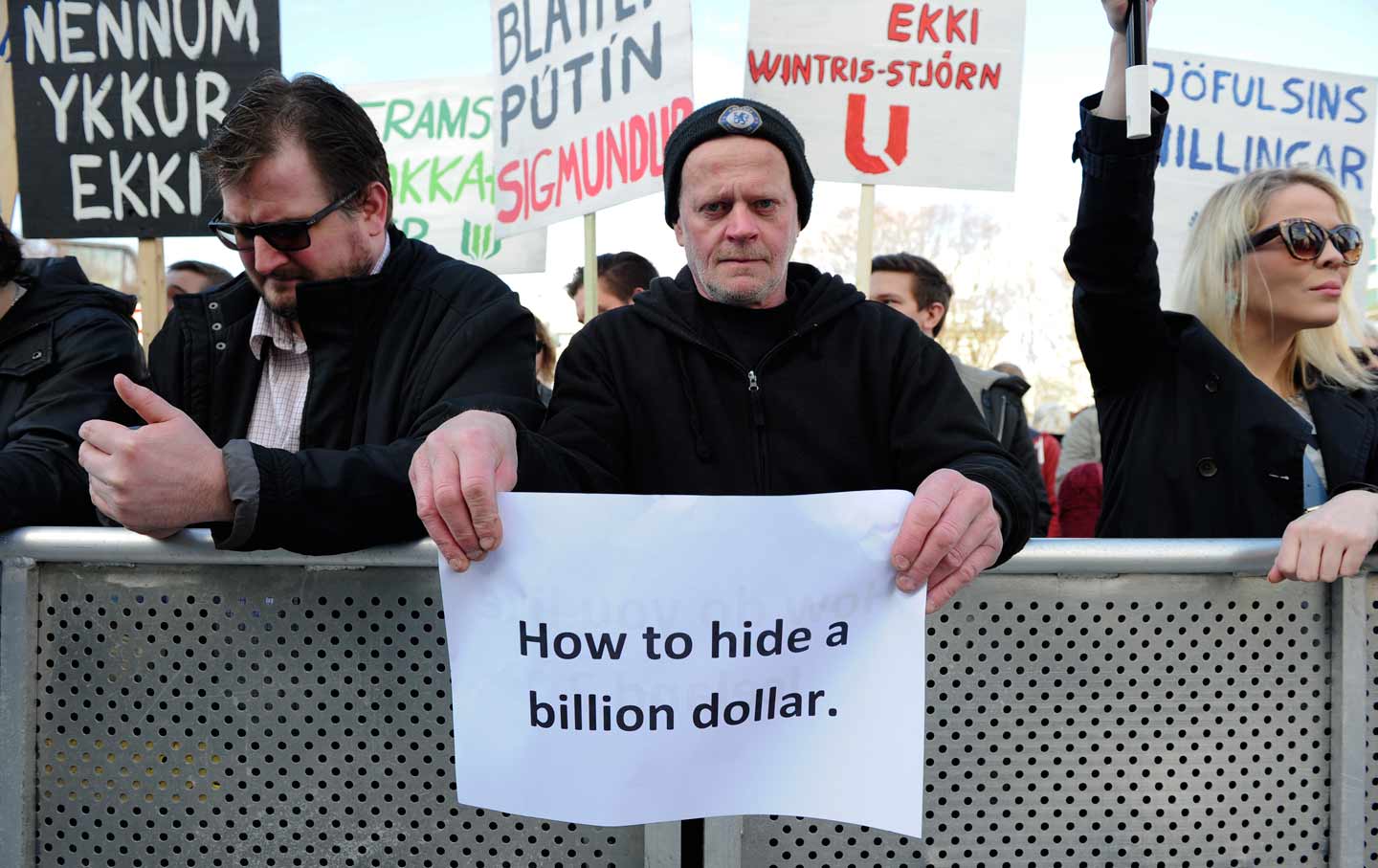 As global wealth concentrates in fewer hands, the world’s wealthy are shifting trillions to offshore havens to escape taxation, accountability, and publicity.

The just-released Panama Papers—filled with titillating details involving the shady dealings of world leaders and violent traffickers of drugs and slaves—should give a strong boost to US and global campaigns to crack down on these global secrecy jurisdictions and practices.

Starting with an anonymous leak to the German newspaper Süddeutsche Zeitung and shared with a consortium of journalists, the Panama Papers initially identify 140 politicians and public officials using off-shore schemes.

Leaders named with offshore wealth include current and former members of China’s politburo, three members of the UK House of Lords, the president of Ukraine, and the prime ministers of Iceland and Pakistan. Others include movie star Jackie Chan, Argentinian soccer star Lionel Messi, and 29 billionaires from the Forbes global wealth list.

Initial media coverage in US major dailies is scant, perhaps due to the conspicuous absence of US citizens named in what The Guardian calls the “first tranche” of disclosures. But as more findings are revealed over the coming months, it’s hard to imagine that prominent American names won’t be on the lists.

Russian president Vladimir Putin’s close associates are heavily implicated. Kremlin spokesman Dmitry Peskov was quick to counter-attack, arguing that the motive behind the leak was political, not journalistic. “Putin, Russia, our country, our stability and the upcoming elections are the main target, specifically to destabilize the situation.” Peskov charged that former CIA and US State Department had even helped analyze the documents.

The papers implicate Iceland’s Prime Minister Sigmundur David Gunnlaugsson as secretly owning millions in bank bonds during the 2008 collapse of Iceland’s banking system. He is facing calls for his resignation.

The unprecedented year-long journalistic effort involved more than 370 reporters from 100 media organizations, coordinated by the International Consortium of Investigative Journalists (ICIJ). The primary sources were leaks from Mossack Fonseca, Panamanian law firm with more than 35 offices around the world. Journalists sifted through transactions involving 214,488 off-shore corporations covering 40 years of activity.

Gabriel Zucman, author of The Hidden Wealth of Nations: The Scourge of Tax Havens and assistant professor at UC Berkeley, estimates that $7.6 trillion in individual assets are in tax havens, about 8 percent of the world’s financial wealth. He believes the use of tax havens has grown 25 percent from 2009 to 2015. Zucman estimates that US citizens have at least $1.2 trillion stashed offshore, costing $200 billion a year worldwide in lost tax revenue from wealthy individuals. US multinational corporations underpay their taxes worldwide by $130 billion by engaging in corporate tax avoidance.

The Panama Papers reveal the widespread use of shell corporations in the British Virgin Islands, the Seychelles in the Indian Ocean, and Panama. Historically, North American investors prefer tax havens in the Caribbean or Panama, with an estimated 54 percent of offshore investments going to those areas. Other popular tax dodging destinations were Switzerland, Ireland, and the Channel Islands, off the coast of England.

Transnational corporations also have an estimated $2 trillion in assets hidden in offshore tax havens or stashed in subsidiary corporations in countries with minimal or no corporate taxation.

While the use of offshore systems are not always illegal, they are often abused to dodge taxation, launder funds from criminal activity, and allow public officials to conceal assets from publicity and scrutiny. As the Süddeutsche Zeitung wrote, a “look through the Panama Papers very quickly reveals that concealing the identities of the true company owners was the primary aim in the vast majority of cases.”

This publicity will hopefully bolster the global movement against tax haven abuse, including the work of US networks such as Americans for Tax Fairness and the Financial Accountability and Corporate Transparency (FACT). The FACT Coalition has been advocating for transparency reforms such as disclosure of “beneficial ownership” of shell corporations and entities. It is pressing for passage of “The Incorporation Transparency and Law Enforcement Assistance Act” (H.R. 4450 and S. 2489) that would require all American companies, with a number of exceptions, to disclose the real people who own or control them when they are formed, and to keep that information updated.

FACT Coalition member Global Witness urges US-based activists to consider the considerable leverage we have in this country to change this system. The United States itself is a major tax haven, one of the easiest places to set up an anonymous shell company to move ill-gotten gains around the world.

And abuses of the offshore system are increasingly convenient. For $2,500, an individual can now purchase the “Complete Offshore Package” that includes an offshore corporation in Belize, an offshore trust in the Bahamas, and offshore Bank account at the Global Bank of Commerce in Antigua, and mail forwarding for one year. After the set-up, this will only cost $1,000 a year.

Systematically confronting offshore tax havens will require legislative action, international diplomacy, and sanctions and penalties aimed at both banks and tax-haven jurisdictions. Nations must establish treaties requiring uniform disclosure and transparency, both of banks and capital flows. The United States has enormous responsibility and leverage in fixing this broken system.

The Panama Papers are a boost to the global movement to stop tax-haven abuse and recapture trillions of the hidden wealth of nations. This story isn’t going away anytime soon.